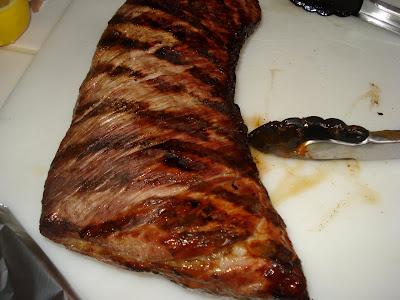 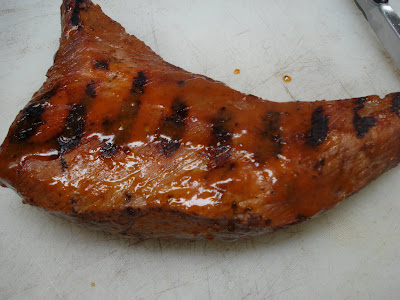 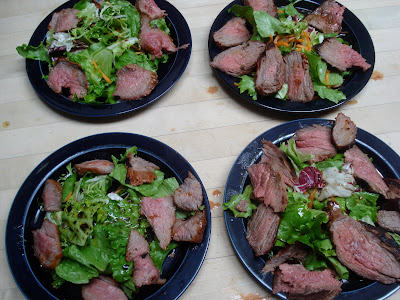 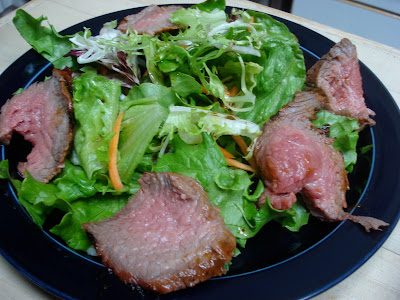 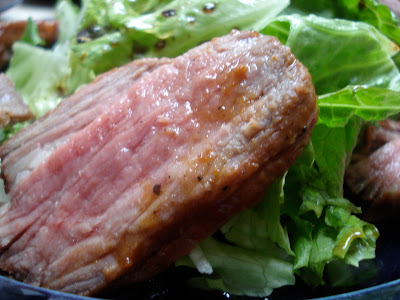 Elizabeth and I were over at my parents' house Saturday so we got a couple tri-tips from Taylor's - one plain, and one with "Spicy Jezebel marinade."  I grilled them both and sliced them, ringing a plate of salad with the pieces. Elizabeth and I had the spicy, my parents were less daring and had the plain.
The spicy tri-tip was outstanding. I have literally cooked hundreds of Taylor's tri-tips over the years, and this was the best one I have ever had. I only put a simple vinaigrette on the salad and the meat juices mixed with it to form a nice dressing. 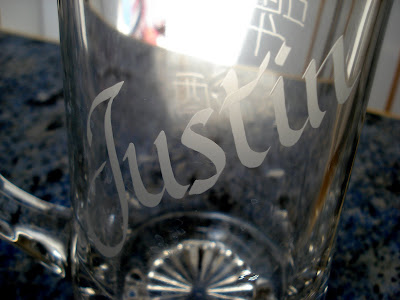 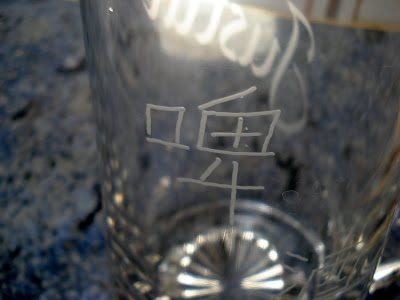 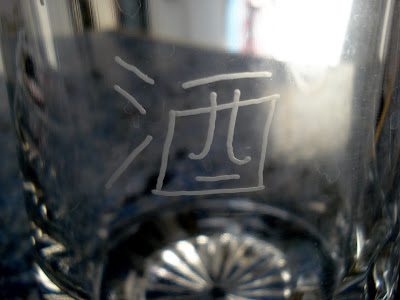 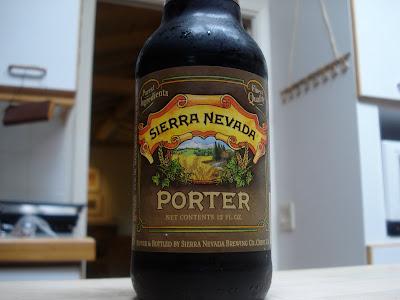 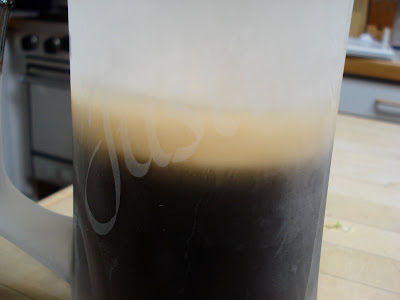 I almost never drink beer with lunch anymore, but the spicy steak was crying out for a nice dark ale. I wanted Deschutes Black Butte Porter, but the local liquor store stopped carrying it. Instead they have the Sierra Nevada Porter, so I got some of that - Sierra Nevada does not make a bad beer.
My cousin's wife is Chinese. The only thing she ever taught me to say in Chinese is Merry Christmas, however years ago for my birthday she gave me an engraved mug. She claimed it reads "Justin's beer mug," however it occurs to me that I've never actually verified that. It could very well read "Justin is an a**hole." Can anyone help me out with this one?
SATURDAY DINNER 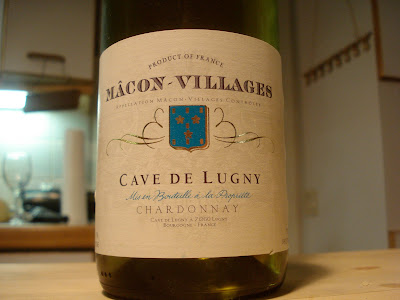 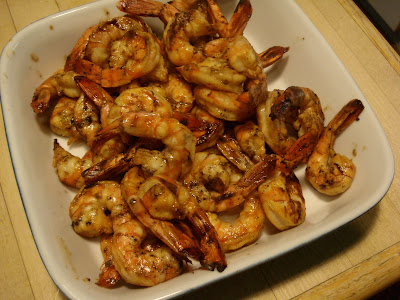 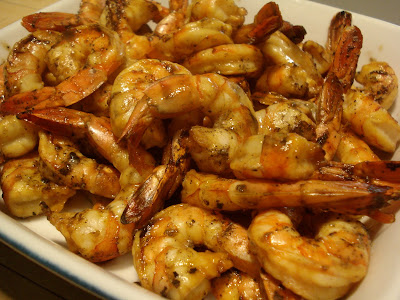 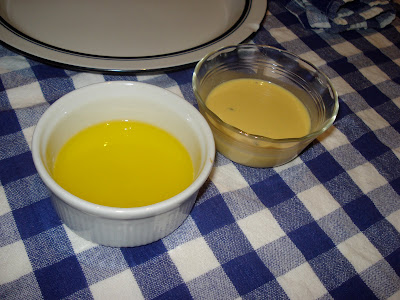 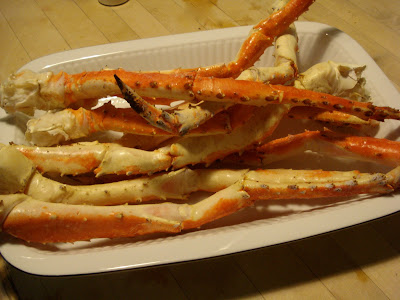 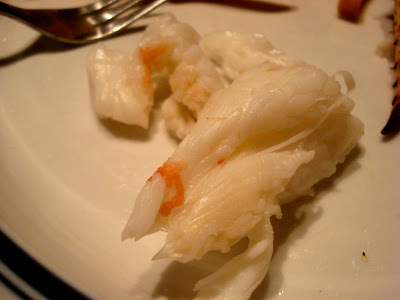 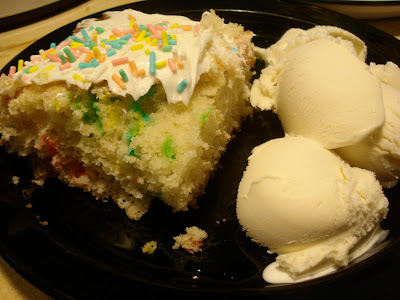 Ralph's has king crab legs on sale for $7.99 a pound, so I got three pounds and decided to have a seafood feast. I also got a bag of frozen shrimp from Fresh & Easy and defrosted them in the fridge overnight. I prepared some clarified butter and also a honey mustard with some of the Sierra Nevada Porter - it was one of the best honey mustards I have ever had. (I am happy to give anyone the very simple recipe if they are a fan of honey mustard.)
Before grilling the shrimp I marinated them for about an hour in some barbecue sauce and vinegar. The crab legs were already cooked so I warmed them in the oven for just a few minutes while I was frying some french fries.
The food was very good. Grilled shrimp is probably my favorite kind of shrimp - even more than fried, and that's saying something - and the crab, while not the best I've ever had, was still delicious. Especially dunked in butter. For dinner we had a funfetti cake and vanilla ice cream.
SUNDAY BREAKFAST 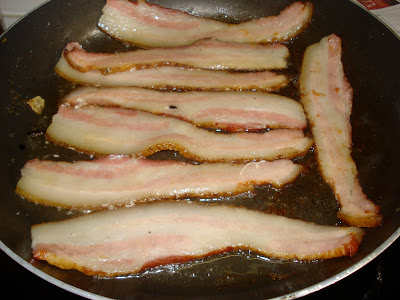 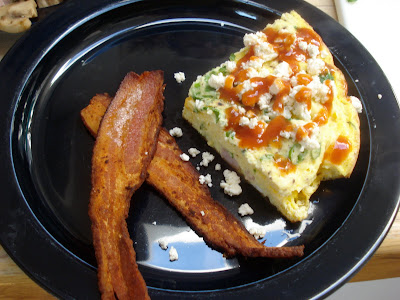 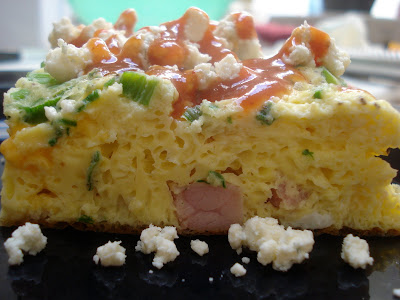 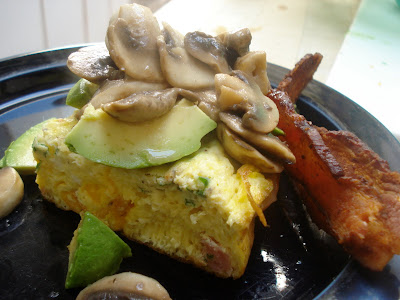 While I love bacon, sometimes the skimpy Oscar Mayer variety just won't cut it: I need something more substantial. Taylor's always has thick, meaty Amish bacon, so I purchased several slices of that in anticipation of making a big breakfast on Super Bowl Sunday. I fried the bacon while I threw together a frittata with diced ham, sliced green onions, and (a lot of) cheddar cheese.
After cooking the frittata and slicing it into quarters,I topped mine with feta cheese and Taco Lita hot sauce. Elizabeth added avocado and sauteed mushrooms to hers. I think that looks disgusting, but I fully admit I am probably in the minority on this
SUPER BOWL SNACK 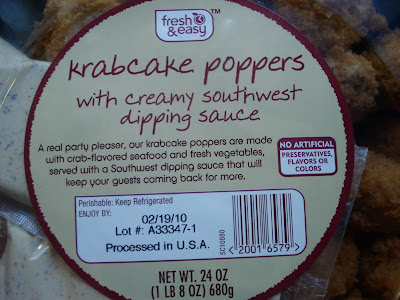 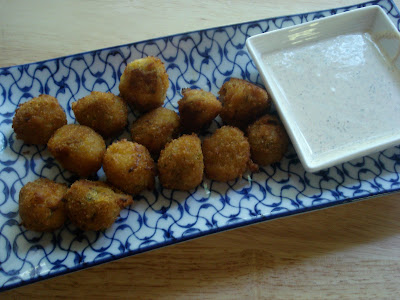 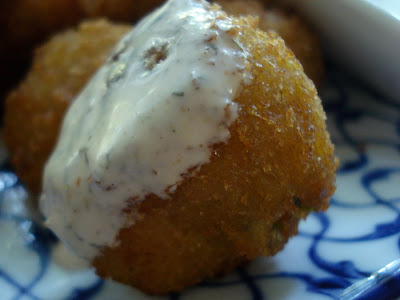 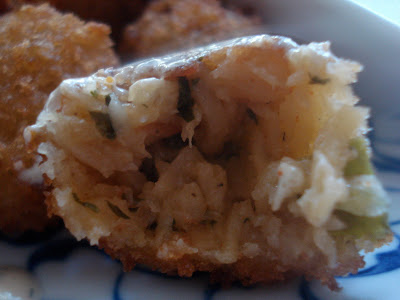 During the game, I cooked some "Krabcake Poppers" from Fresh & Easy - a "crab-flavored" seafood blend with a spicy dipping sauce. They weren't bad but I don't think I would recommend these to anyone. It would be easy and not too time-consuming to make these from scratch, which would be a lot better.
SUNDAY DINNER 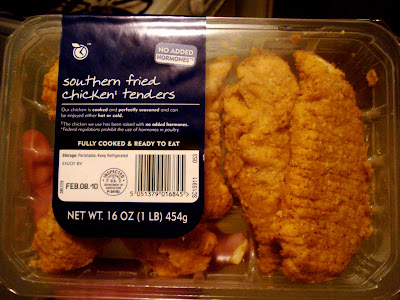 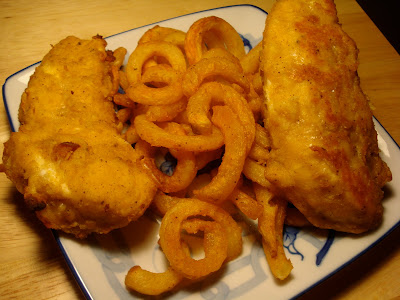 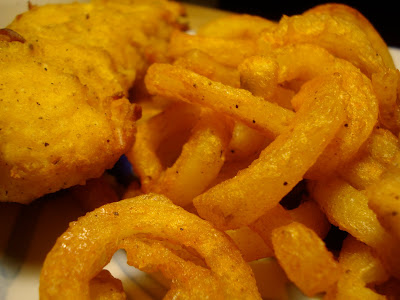 After the game, while watching two hours of "What Not To Wear" (hey, Elizabeth did not complain once while I was watching six straight hours of football programming on the HDTV; the least I could do was let her watch whatever she wanted after the game) I cooked some "Southern Fried Chicken Tenders" from Fresh & Easy. I have had the thinner version of these, the "escalopes," and also the nuggets, and liked them both. So it came as a surprise to me that this was the worst thing I have ever eaten from Fresh & Easy. They were soggy, bland, and bursting with chunks of fast. We did not eat much of them and I will never buy these again.
Posted by JustinM at 11:25 AM

Shoulda hel out for the '70 d"Yquem. Perfect with Funfetti cake!!!

I believe that is the suggested food paring on their website. (I may be wrong, though.)

Funfetti cake is delcious, almost magical. Yes, I would go so far as to say magical.

Anonymous: Well, my dad and I were celebrating - it turns out the 2006 Emerald Bowl that we drove up to in San Francisco in December of '06 wasn't a loss for UCLA, as FSU had to vacate the win the other day because they cheated.

Liz: Yes, funfetti is the best thing you have introduced me to. Like Super Troopers, only the exact opposite.

I know I'm a bit late, but could I have your oh-so-simple honey mustard recipe?
I'm addicted to your blog, by the way - it's keeping me from going mad without nice food at university.

Sure. It's from Deschutes Brewery in Portland. But you can use any porter in its place.

This is the link.

Yum. We don't have honey mustard over here in England, so I'm eager to try it. Thanks!

Yeah but the pints of Guinness over there... oh they are good.

I hate Guinness. Also, that's Ireland. But thanks anyway!

There is plenty of Guinness in England and it's better than anywhere in America.

Sorry. You are clearly much more educated on the subject of Guinness than I.