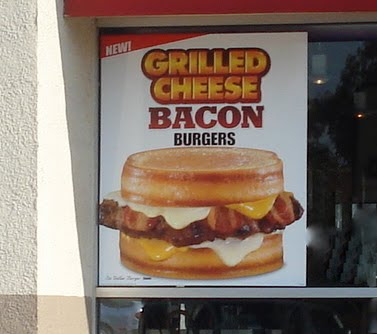 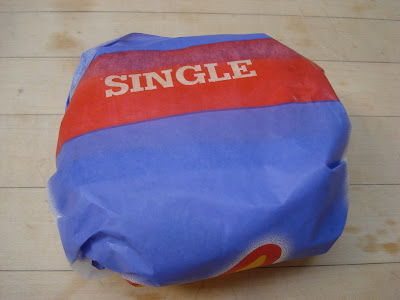 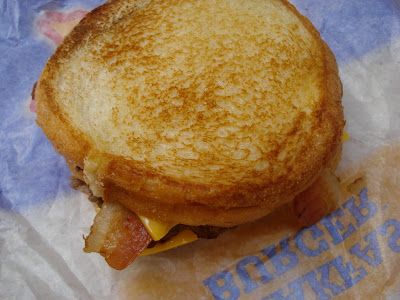 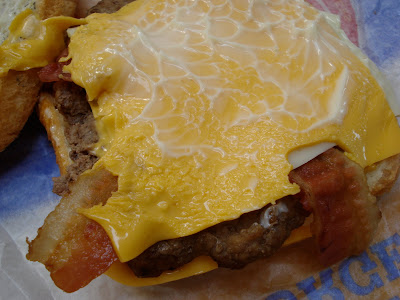 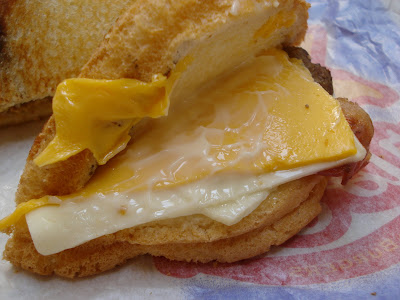 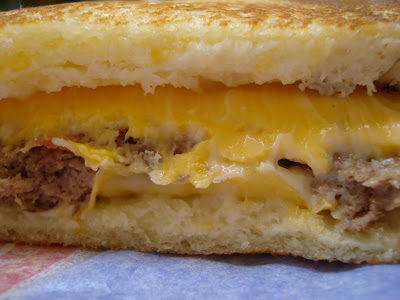 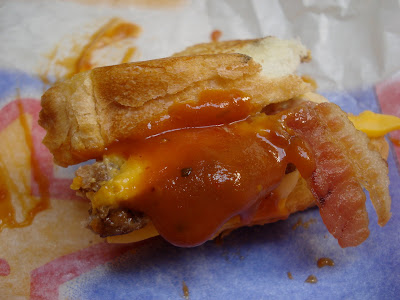 You can usually count on Carl's Jr.'s commercials to fall into one of two categories. The first is hot women doing overtly sexual - and completely unnecessary - things. Paris Hilton washing a car, something I doubt she's ever done in her life. Padma Lakshmi licking barbecue sauce off a piece of bacon, something I've never once seen a person do. Kim Kardashian eating a salad in bed - with her fingers - in her underwear.
The other category is guys acting like immature idiots. The doctor obsessing about bourbon while on the job. The guy who gets chili all over his face, truly the most disgusting food commercial I have ever seen. The guy who starts crying after eating a jalapeno burger then uses those tears to pretend he is sorry for arguing with his girlfriend. And the nadir of Carl's Jr. commercials - and that, my friends, is saying a lot - the two white guys rapping about "flat buns."
The newest fast food promotion from Carl's Jr. is from the second school: a man wants a grilled cheese sandwich so he orders one, apparently off the kid's menu, and is served the sandwich with a juice box and coloring book. "Introducing a grilled cheese for grown ups," the commercial announces, before displaying a picture of a mammoth burger with crispy bacon and four slices of melted cheese on sourdough.
The last couple times I reviewed something from Carl's, I read opinions of it beforehand. The Kentucky Bourbon burger was ripped to shreds by reviews and bloggers, but I actually enjoyed it. The Teriyaki burger got several favorable reviews from websites I like, and I thought it was terrible. I worried that, since I already knew the consensus opinions of the burgers, I was just being one of those contrarian jackasses who needs to hold a minority opinion, regardless of how he or she actually feels. (I don't think I am, but then again those kind of people never do.) So I decided not to read anything about this burger before trying it.

I only ordered the single version of the burger. There were four people in Carl's Jr. when I ordered it and nobody in the drive-through, but it still took about ten minutes for the burger to be ready. (This is not a big deal but the humor in it will become apparent in a moment.) I took it home and unwrapped it. The burger was smaller than the ads make it seem. No surprise. The bacon was not thick and crisp but rather limp and fatty. Again, no surprise. (And there was mayonnaise on it. I have no possible idea why.)
But the cheese was not really melted. Seriously.  How the hell can you call something "grilled cheese" when the cheese isn't melted? I had assumed the reason it took ten minutes to get my burger was that they were grilling it. I have no idea what they were doing. Of course, it wouldn't be a big deal to me as long as it tasted good.
It did not. The burger was terrible. It was the worst cheese I have had in a long time. More than a decade ago I went on a diet for a couple months and I would frequently make myself grilled cheese sandwiches on the Foreman grill, using Kraft "fat free singles." The cheese was lousy, it tasted more like the plastic wrapper than anything else. (I would put lots of Taco Lita hot sauce on it to make it taste better.) This is what the Carl's Jr. cheese tasted like. The patty was the same flavorless patty that they use for every other burger. I added some barbecue sauce - their barbecue sauce is actually decent, much better than the super-sugary barbecue sauces you get at most fast food joints - and it made it slightly better.
After eating it I went online to read some reviews of it. I could not find any, at least not on the half-dozen websites I turn to for fast food reviews. But what I did find on Carl's Jr.'s website was surprising, and not in a good way: this burger I had, which is the healthiest of the three versions, weighed in at 820 calories and 57 grams of fat! Are you f**king kidding me? (The "double" version contains 1020 calories and 72 grams of fat, although I did not consider getting that; the last thing I want in a Carl's Jr. burger is more of their meat.) That In-N-Out hamburger I had Sunday night was 390 calories and 19 grams of fat. I could have had two of them and it would have been healthier than this. Not to mention one hundred times better.
White Castle's frozen, microwavable hamburgers, which I admit a fondness for (I love them with hot peppers and A.1. steak sauce) come six mini burgers to a pack. Normally, I eat only two mini burgers at a time. But if I were ever really hungry and decided to eat the entire box of six - which I've never done, not even when drunk - it would contain 78o calories and 39 grams of fat. Still healthier than this single grilled cheese bacon burger.
So, to review: I waited a long time for a bland, "grilled cheese" burger that didn't actually have any melted cheese, and it's the most unhealthy burger I have eaten in a long time. You may draw your own conclusion.
Posted by JustinM at 8:25 AM

I cannot believe you put that in your mouth.

Uh oh, careful TB...the thing is it tastes WORSE than it looks! HAHA!
I recommend a bottle of 7 year old Turkish Buzbag for that dish. With gusto!

I should have done it Sideways-style and ate it in the restaurant with some onion rings and a '61 Cheval Blanc.

Yesterday I tried one of de new grilled sandwiches from Jack indie Box - the Trio. It looked better than what you got from Carls. Maybe I was hungry but it also tasted good.

Nice - my original partner in fast food adventures is coming up from San Diego this week, and we have already decided to try those.

You sir, are a hero for saving me from this "food"! I was about to run out and try one, just because I was curious, but it looks and sounds horrible. You've just saved my life. Or at least my lunch.

Always happy to be the canary in the coal mine. I actually tried the JitB sandwich today that Cafe Pasadena mentioned a few comments earlier: the Italian dressing was nasty, but if you take that away, it was actually pretty good. Not great, but 100x better than anything at Carl's.

Unmelted cheese on a grilled cheese sandwich is a travesty! They should do what some burger joints do and cook the cheese right on the beef patty or bun!

Agreed, Q, but what are you gonna do? It's not like Carl's is a burger joint that really cares about what they are doing.

I ordered this a couple of weeks ago and it is one of the worst burgers I have ever eaten.

I had this burger this morning, it was the worst I had in my life, no kidding, I am still feeling sick, I had 2 alka seltzers and still feel like vomiting, this is the truth, I got on line to see if someone else had the same experience, it is a bad bad burger, the mayo ... why is there mayo with melted cheese? that tasted horrible, another thing, I only had half of the sandwich cause I was feeling sick right away., Please don't make the same mistake,( I ordered a single) thank God only a single, hope this helps and saves someone from eating this Sh.....

I hope you feel better. No question, this burger is an absolute loser.

You people are sissies! Not only did I eat the Garbage Grilled Cheese Burger, I put one of those poofy chocolate glazed donuts in the middle of it. I convinced my friend to do the same and we both thought it was deadly-delicious. "A meal isn't over when you're full, it's over when you hate yourself" -Jim Gaffigan