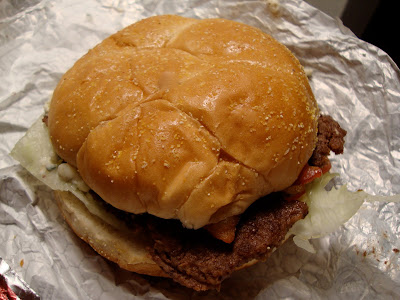 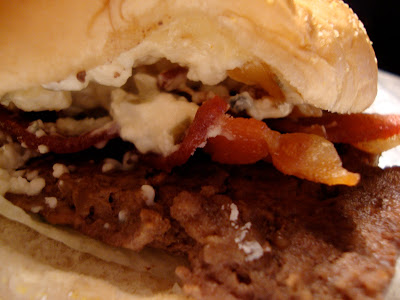 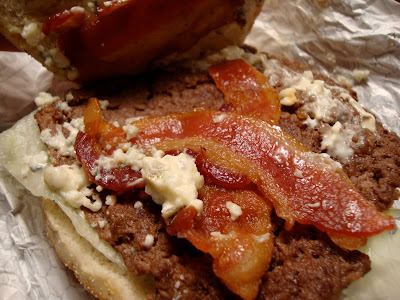 Unlike most fast food places that recycle the same tired ingredients in endless variations, Wendy's actually comes out with some interesting items. I still have not met anyone who does not like the spicy chicken nuggets. The ephemeral "flavor dipped sandwich" was as good as any buffalo chicken sandwich I have ever eaten from a restaurant. Their fish fillet sandwich is the only fast food fish sandwich I have ever liked.
So when they introduced the bacon & blue burger last week, I figured it was worth a try. Last night, after a brief stop at the South Pas farmers market - for the first time in months, there were actually a fair amount of people there during its last hour, a good sign that spring is on its way - we headed down to the Wendy's in Alhambra to grab some quick food and head home to watch Weeds.
(I decided to check the order when the employee handed it to me, even though he assured me it was all there. Of course, it was not. Elizabeth's junior bacon cheeseburger was missing. Just a tip if you ever go to this Wendy's: they almost always neglect to give you your full order.)
The burger did not look too impressive when I opened it. I don't know why this surprised me. The famous square patty looked like its edges had been nibbled on by my cat for a few minutes; it only resembled a square in the loosest of definitions. I took a bite - it was pretty bland. The applewood-smoked bacon is better than most fast food bacon, but that's not saying much.
The blue cheese - a cheese I usually love - was overpowering, and not in a good way. There is supposed to be a "steakhouse sauce" on this burger but all I could taste was the blue cheese. I wasn't expecting anything comparable to the Point Reyes Blue that I'd eaten the night before, but I was hoping for more than this, a chalky, almost-sour tasting cheese.
I would not eat this burger again. But I will not hesitate to try the next promotion that Wendy's comes out with. Hopefully it will be better than this.

Glad our cheese still holds the Gold Standard for you. For one of the best burger experiences, try this recipe (although it requires a bit more work than driving to your local Wendy's) :) Enjoy!
--Jill Giacomini Basch
Point Reyes Farmstead Cheese Co.

Boil wine and shallots in medium saucepan until reduced to 2/3 cup, about 20-30 minutes. Add rosemary, 1 tablespoon butter and brown sugar; whisk until butter melts and sugar dissolves. Remove from heat. In small bowl mix remaining butter with garlic. Set aside.

Sounds great, thank you. I see that burger in my near future. Yours is my favorite blue cheese in America, and you guys are my second favorite cheesemakers. (Cyprus Grove is my favorite - no offense!)

Just looking at the pics of this makes me think the promotion is they realize they can't charge for this. "Here! Take It!! Please..."

I get the jr. cheese burger deluxe. No bacon. I do not get bacon at fast food places, it's never good.

But Arby's has good bacon. Maybe I will take you there for your birthday.

I actually tried this because they screwed up my order and wound up with one of these instead of a chicken sandwich. I expected it to be just awful but I was pleasantly surprised. I thought the bacon was the worst part. Soggy and gross. Otherwise the blue cheese and sauce was not terrible.