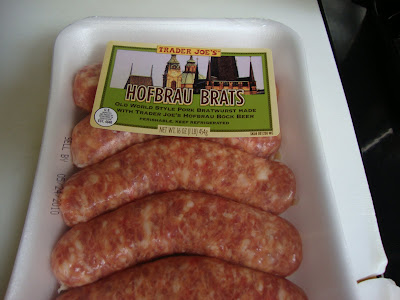 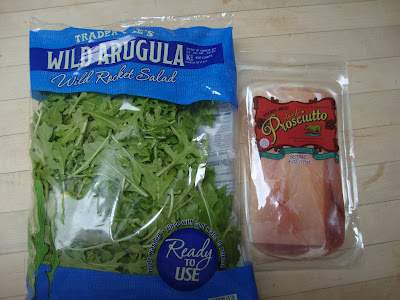 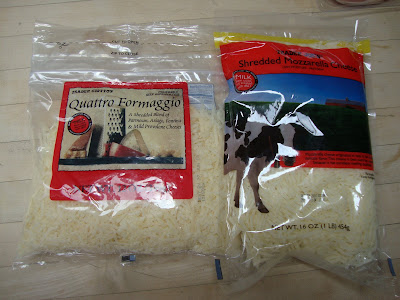 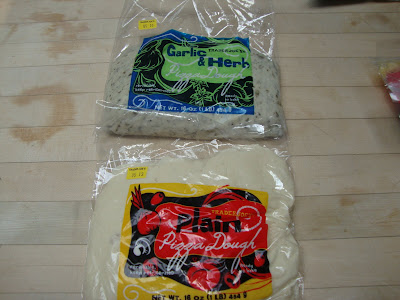 I've written before that my parents are pretty laid-back about traditions like Father's Day and Mother's Day (and most other holidays, for that matter). There is never any pressure to go out and fight crowds at a restaurant; a lunch cooked on the grill and perhaps a movie or a ballgame on TV is always enough. Earlier in the week I had given my mom several choices for a Mother's Day lunch. Pizza on the grill sounded great to her. Yesterday, Elizabeth and I went over to my parents' house in the morning, picked up a small shopping list, then headed down to Trader Joe's. 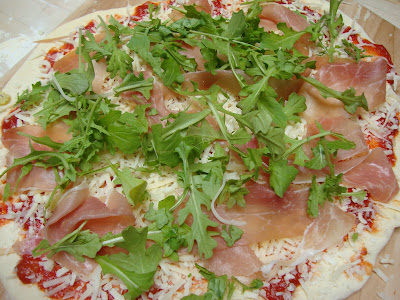 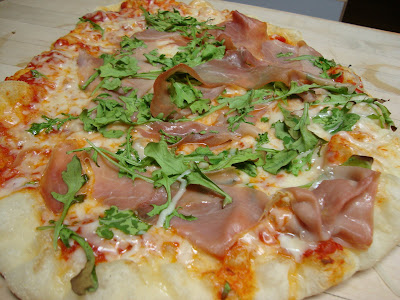 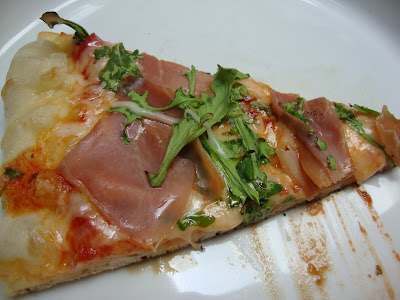 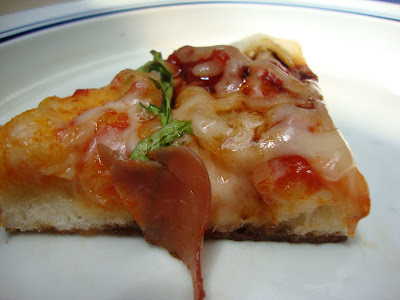 The first pizza I made was a prosciutto and arugula pizza. (I was first introduced to this combination at Gale's a few years ago and reminded of it Saturday when we had lunch there -but more on that tomorrow.) I topped a regular pizza crust with Trader Joe's pizza sauce and their Quatro Formaggio: Parmesan, Asiago, Fontina and Provolone.

The pizza stone on the grill was very hot by this point and the pizza cooked quickly, no more than a few minutes. It was very good. I sprinkled some balsamic vinegar on one of the pieces to give it some bite; it was tasty - I love vinegar - but did not really add anything to the slice. 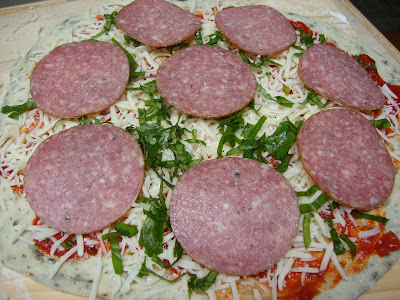 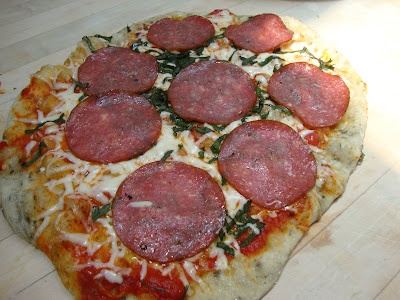 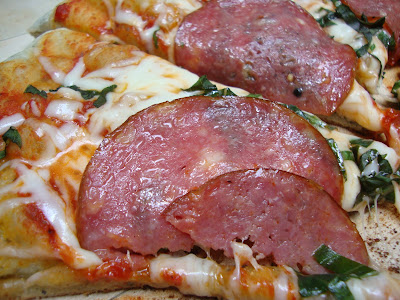 The second pizza was mozzarella cheese, salami (that my parents had purchased at Whole Foods) and fresh basil from the garden. Instead of the regular pizza dough, this was done on "garlic herb" pizza dough. I have had that dough before but not on a pizza; usually I cut it into strips, rolls them, and bake them in the oven as breadsticks.

This was my favorite of the three pizzas. My dad thought the salami was too spicy, but then again, this was Mother's Day, so who cares? My mom loved it. I wish I had used more basil, but that's a small complaint. 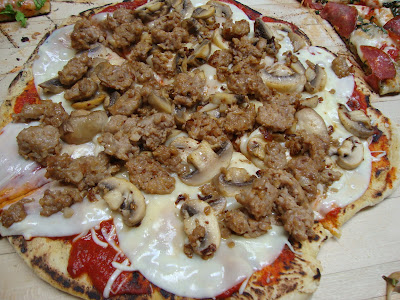 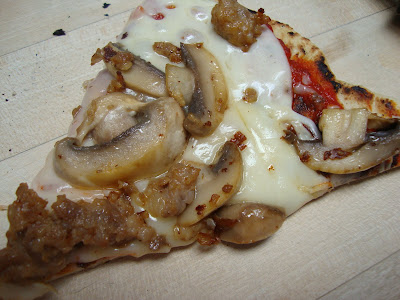 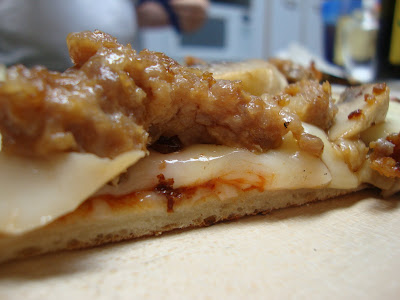 My mom had requested a pizza of sausage and mushrooms. I had wanted to make it up to Taylor's in Sierra Madre on Saturday to get some of their Sweet Italian Sausage, but I had too much to do and wasn't able to (and Taylor's is closed on Sundays). So at Trader Joe's I got a package of "Hofbrau Brats." Before I started assembling and cooking the pizzas, I took the sausage out of the casing and cooked it in a pan, then sliced the mushrooms and added them for the last few minutes. I don't really like mushrooms, but when they're cooked in pork fat and beer they become slightly more tolerable (although I took most of the mushrooms off my slice and piled them on Elizabeth's).

We all enjoyed the pizzas and there were plenty of slices - more than a whole pie's worth - left over, which had been my intention. Last week I saw a box in my parents' trash can from a local pizza place that, while not bad, is nowhere near as tasty as the pizzas I made yesterday, and probably twice the calories. Leftover pizza is never a problem for anyone, right?

ugh...this looks amazing! I was happy to work that day, but I'm pretty sure I would have faked an illness if I knew this was on the menu!

You didn't say if the "hofbrau brats" sausage was any good or not. Better than Taylors?

Good? Yes. They were tasty, although I snacked on a few by themselves and the "spice to the buttery/fatty ratio" was too low for me. Some people may prefer the flavor to come from the fat, but I like the spices more. I prefer Taylor's sausage but I would be happy to eat these again.

If this is Travis, mom loved the flowers, though.

PP- another awesome post! what you said about your folks i feel ya. my parents are so chill on holidays. i love it. theyd rather hang out at home and relax than deal with the fuss and crowds of everyone and their mama (literally) going out to eat. i look at lines outside of restaurants on mothers day (and valentines day, but thats another topic) and think "ugh are u kidding me?" anyway, ive also realized that most people dont think like this, but whatever, im glad i got this point from them.

Yes, my parents understand fully that no place we can go on a day like that is going to be as laid-back and actually enjoyable as eating at home and watching TV.

The best overall was last year: Elizabeth and I got McDonald's and watched The Princess Bride at home, saving who knows how much money and aggrevation.

We had the garlic chicken pizza Sat at Pasa CPK.

They just opened a Trader Joe's here last year (in RI), but it's too far of a drive for me to ever actually go to. Can you explain the novelty? Is it full of only TJ-brand items? I've heard it compared to Whole Foods.. is it mostly organic?
Asking you is much quicker than driving 30 minutes to step foot inside the store. (In RI, anything over a 20 minute drive is like a day trip. Rhode Island mentality!)

Diana check out the TJ's web page here:
http://www.traderjoes.com/
It's a quirky store where one can find ALMOST everything one needs.

It's great for nuts, cheese and wine but they have a myriad of interesting Trader Joe branded items which are superior to many of the big brands.
I shop there every week for coffee, fresh-squeezed orange juice, yogurt, cereal and bread items.
They also carry excellent olive oils and other cooking 'condiments'.
Cool place. You should make at least one sojourn.

Tim, you forgot to mention that it's scaaaaads less expensive than Whole Foods.

I know that the weather is turning and the sweet, sweet summertime is coming when Pulled Porker starts making pizzas. I do believe it's time for me to start growing a couple of basil plants.

The orginial TJ's is 6 blocks away from me. In other words, Diana, a 30 minute drive.

You need to check it out at least once. Any person who has compared it to Whole Foods hasn't been to either more than once or twice, if ever. You could get a few interesting cheeses, a couple frozen pizzas and a bottle or two of wine and you will walk out of there having spent less than $25.

If you want, go to the upper left corner of the blog, enter the search terms "Trader Joe's," and you will see a small sample of how many different kinds of things they carry.

I will be about a 5-minute drive from TJs on Saturday. I will probably stop in!