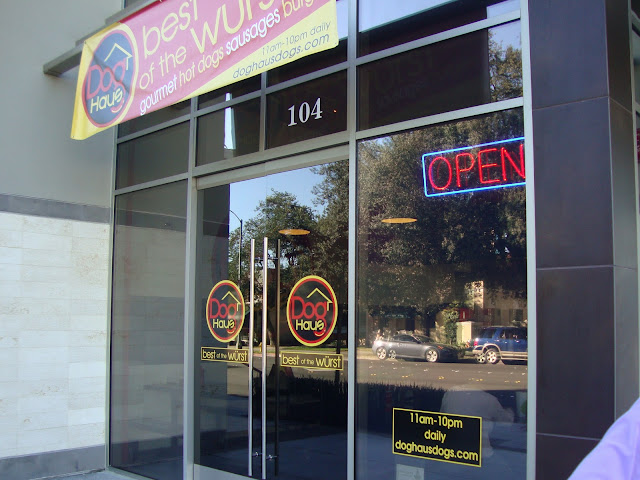 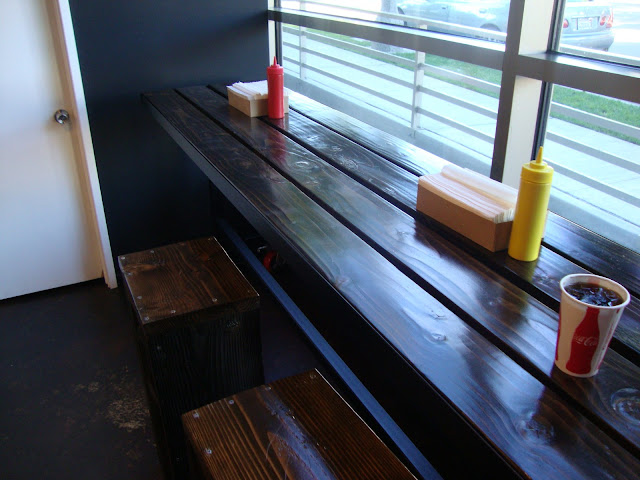 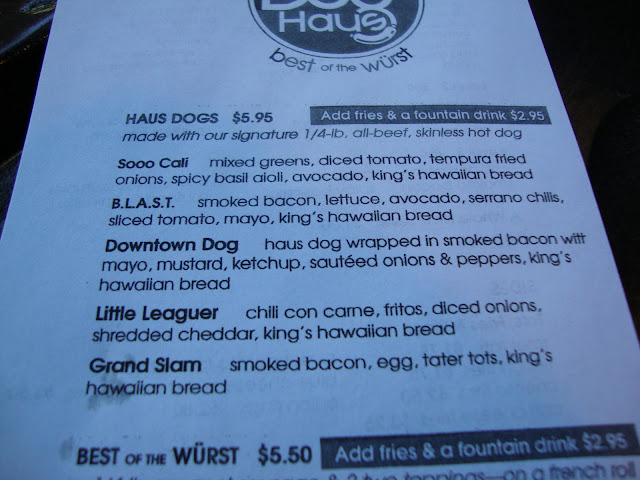 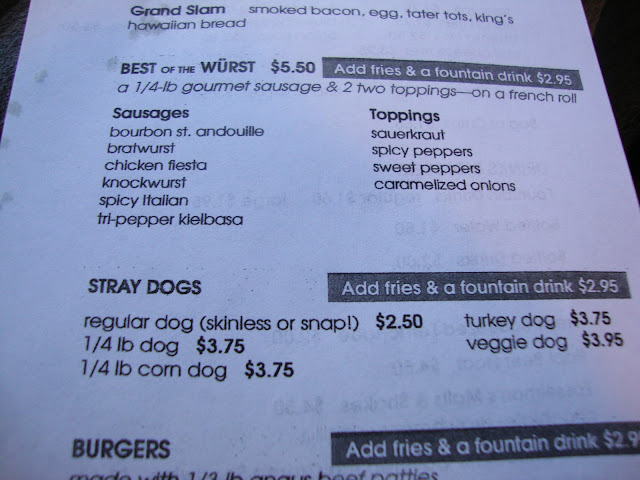 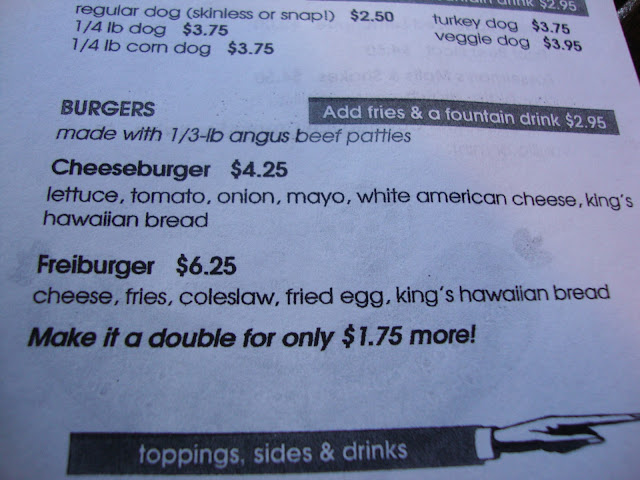 I suppose I would have preferred that several new lobster shacks had opened in Pasadena in the last year. But that seems pretty unlikely, not to mention more than a little out of place. And I would have loved it if we could have a couple of real barbecue pits, like that off-ramp on the I-70 in Kansas City where you can go left 1/2 mile to Arthur Bryant's or right 1/2 mile to Gates. But the barbecue options in this town have always been wildly inconsistent. A storefront in Old Town selling Belgian fries like Pommes Frites in Manhattan, in addition to making me extremely happy, would have a license to print its own money.

As it stands, though, the proliferation of hot dog joints in Pasadena in 2010 has been a very good thing. The Slaw Dogs set the standard at the beginning of the year, affirming that hot dogs could be every bit as exciting as sandwiches or burgers. Big City Hot Dogs opened next in Old Town, a straight-forward place serving eight hot dogs in regional styles. The place is perfectly acceptable, although I have to wonder if the person who decided on the ingredients for each of the dogs has actually been to the cities for which each dog is named; they are not the most authentic dogs you will ever eat.

And now there is Dog Haus. Down on the corner of Union and Hill, in a storefront that you could easily mistake for a GameStop if you glanced quickly, Dog Haus may be the best of the bunch. Not to mention there is plenty of parking available, something you can't say for the other two places. (Anyone who has circled the block repeatedly at Slaw Dogs can appreciate Dog Haus's parking lot and ample street parking.)

My friend Carla and I were going out for lunch the other day and she charged me with coming up with some options. "You always have such good ideas," she said, although to be honest most of the time I just bitch about the fact that Hooters is no longer in Old Town and say "let's just go where you want to go." But on this occasion I came up with a list of a half-dozen different places. Dog Haus was the only one she hadn't heard of and we decided to give it a try.

Every table was full so we ordered at the counter and stood around for a minute. There were a couple dogs advertised that don't appear on the Dog Haus website or their printed menus: the Reservoir Dog and The Cowboy. We thought both sounded good so I suggested we order one of each and share. I added some regular fries to my order and got myself a Diet Coke; the total was just over nine bucks. Carla also ordered some sweet potato fries with blue cheese. Eventually we sidled up to a high table against the window in the back of the restaurant, the only available seats (although by the time we finished lunch, everyone had cleared out). 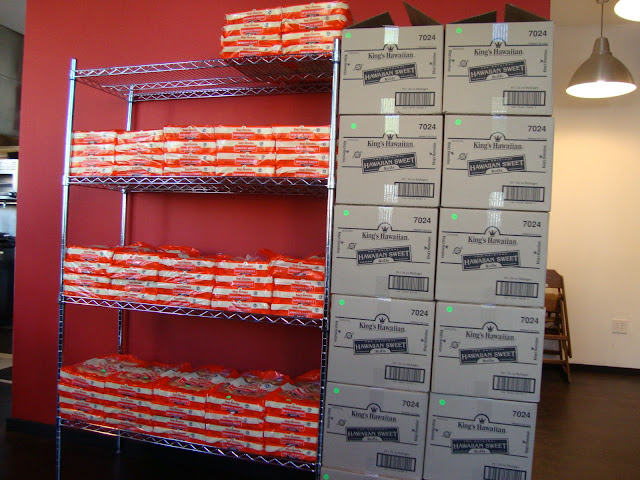 All of the hot dogs are served on King's Hawaiian Bread, hence the hundreds of packages stacked against the walls. 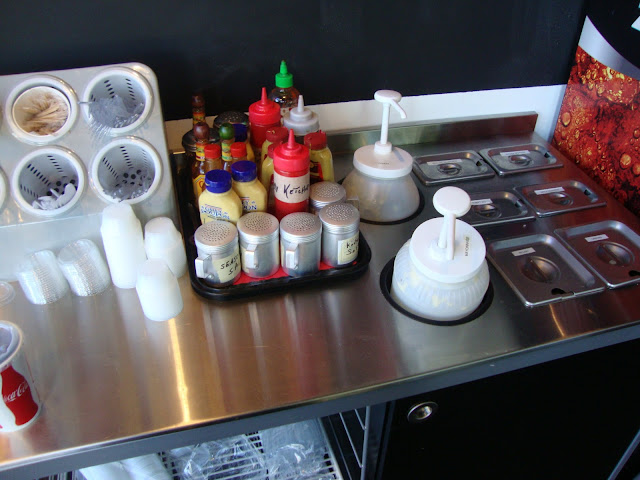 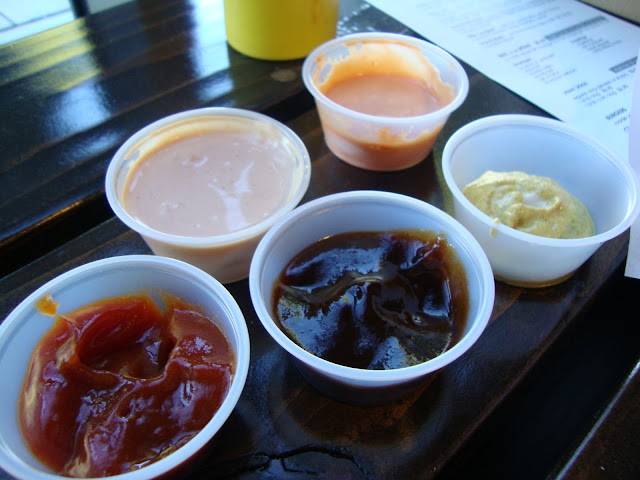 There is a condiment cart to rival Wolfe Burgers, including three different flavors of Cholula hot sauce. I poured myself a container of their curry ketchup (fantastic), barbecue sauce (much too sweet for my liking), and Gulden's mustard; I made up my own concoctions in the other two containers - mayonnaise and chipotle hot sauce in one, mayonnaise and Sriracha in the other. 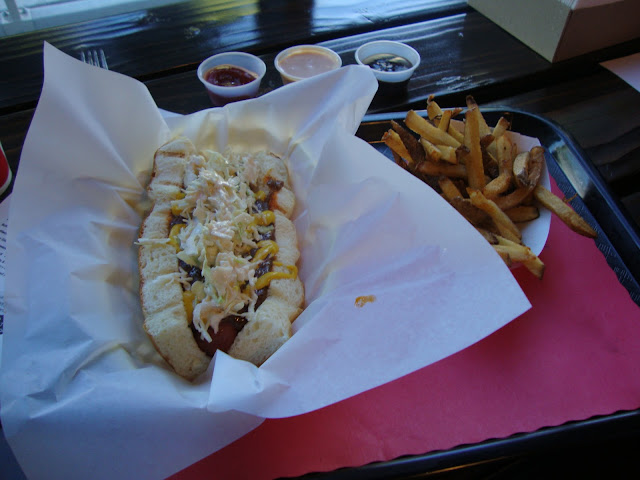 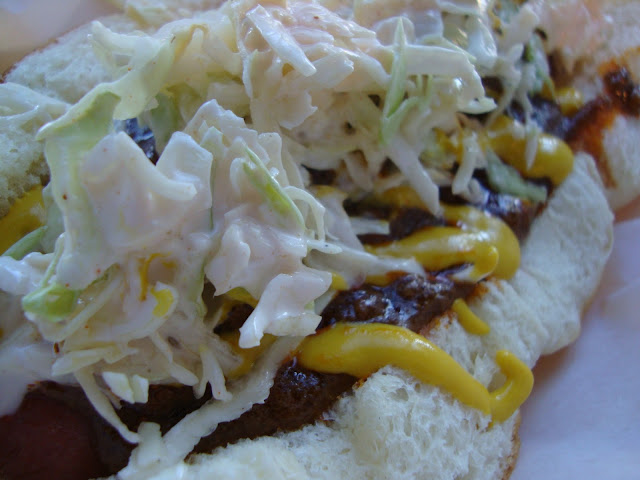 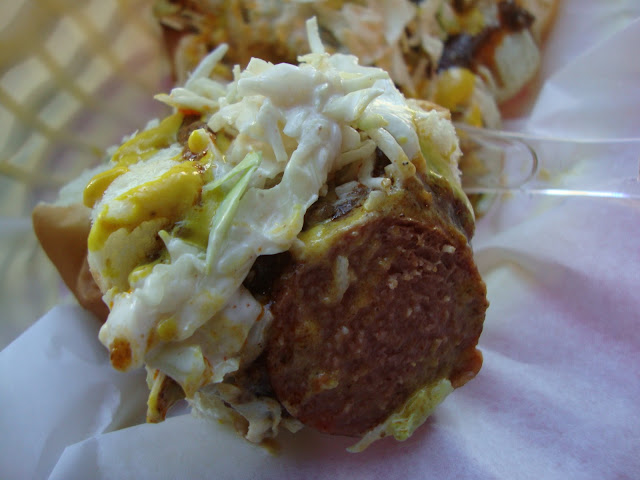 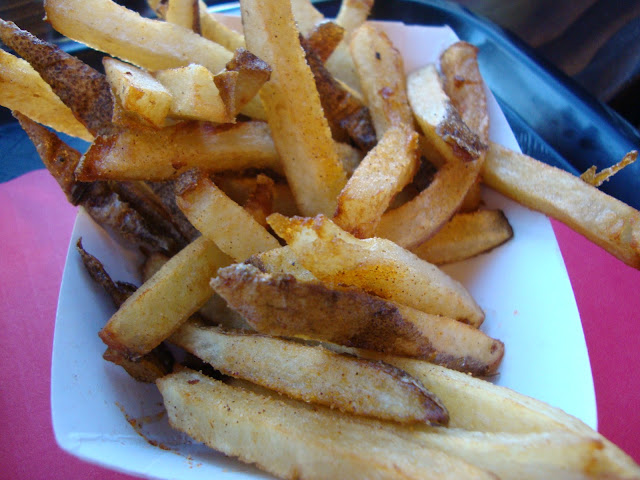 The Reservoir Dog: chili, mustard and cole slaw. And it's awesome. The quarter-pound dogs are a great size, enough to fill up someone with an appetite like mine. The toppings were all excellent, and the fries were perfectly cooked, skin-on potatoes. It reminds me of the way the fries at Wolfe Burgers used to be, seasoned and crisp on the outside, fluffy inside, delicious with the Sriracha-mayo blend.

I was curious how the King's Hawaiian buns would be. I have never been a huge fan of their buttery, sweet flavor, but they work very well with these dogs. They don't get in the way of the big flavors at
all. Have you ever heard the line that you know a basketball referee is good when you don't notice him or her all game long? That's how I feel most of the time about hot dog buns: if you don't notice it, its good. And I barely noticed that I was eating a sweet bun. 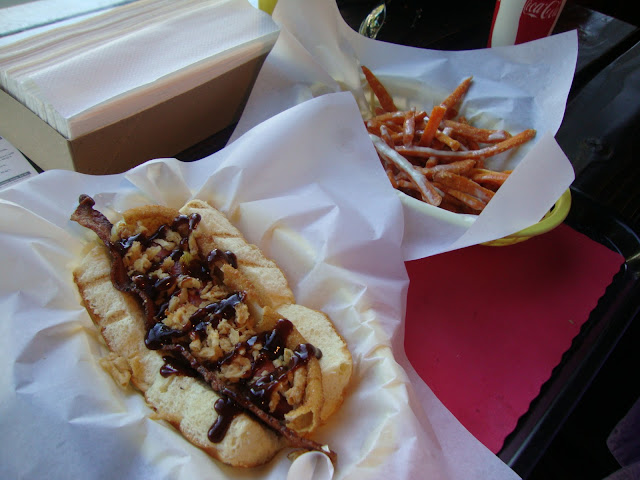 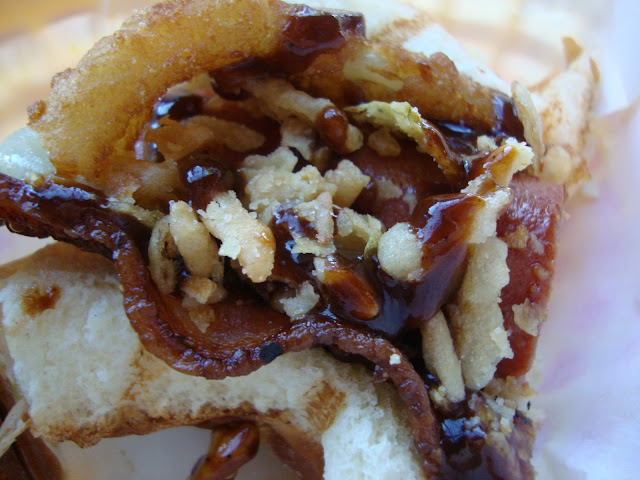 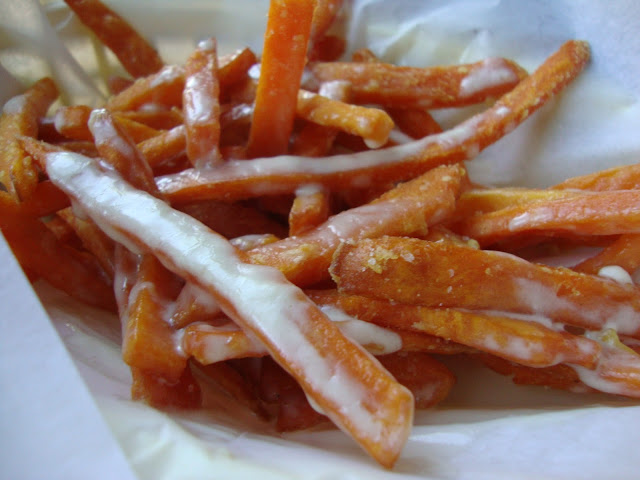 The Cowboy: bacon, barbecue sauce and fried onion strings. This may have been even better than the Reservoir Dog. I said the barbecue sauce was too sweet for me, but when eaten with the bacon and fried onions, it was a nice combination. The bacon was cooked perfectly: crispy and flavorful but not at all burned.

I am pretty sure I have my new go-to place for hot dogs in Pasadena. Slaw Dogs was like one those relationships that burn bright at first: you spend every available minute and dollar on the relationship and you feel lucky at the time, but then one day you realize there is just no passion there, you don't understand what the big deal ever was, and you start itching in strange places. Okay, never mind that last one. But you know what I mean. I had Slaw Dogs too many times and if I never have it again I will be okay with that.

Dog Haus is less expensive, their portions are larger and their quality is higher. And there will always be a space in their parking lot, when you need a little Diet Coke and sympathy.
Posted by JustinM at 8:59 AM

the portion size and cost were two reasons I haven't really returned to Slaw Dogs. I gotta say, I'm very intrigued by this review - I hadn't even heard about this place!

Thanks for the heads up.

Damn that all looks good J.

Mmmm, boy! I've been curious about this place. Thanks for checking it out and glad to hear that it's solid. Go, dawgs!

Fritos: I like to squirt a little lime in it, sometimes with some chopped cilantro, too. But even without those things, it's great.

Gastronomer: You are welcome. I am always happy to eat some hot dogs when needed. At almost every place I go I think 'I could make these better at home.' At Dog Haus, I don't think I could.

My Slaw Dogs infatuation has also waned beyond the point of no return. The quality was there but the prices?!?!? So, this is really GREAT news!
I was worried about the Hawaiian bread thing; I've always hated the sickly sweet flavor, but am willing to give it a big go - probably today.

Speaking of Lobster Rolls, isthere anywhere to get one in the Pasdena area?

I can't think of one (which certainly is not a definitive answer).