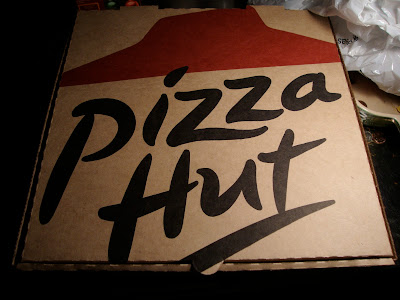 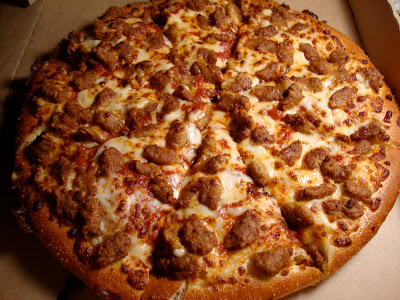 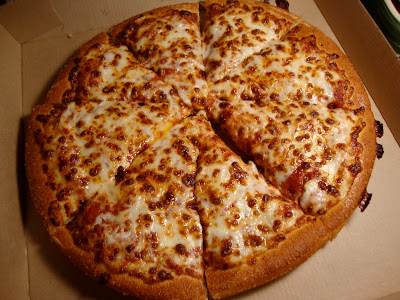 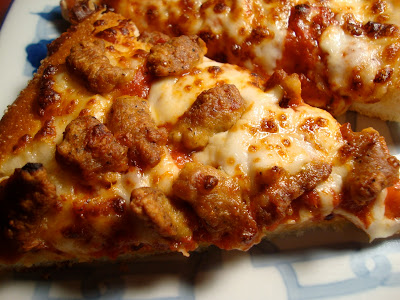 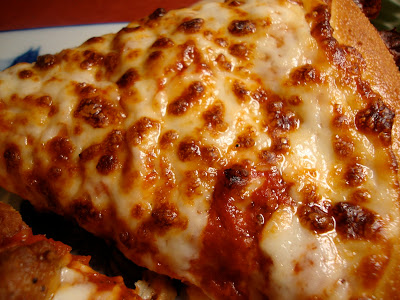 Let's get this out of the way first in the interest of disclosure: I have never liked Pizza Hut. Long before I started making my own pizzas and realized how cheap and easy it is to make great pizza at home, and long before I'd ever eaten real New York pizza and realized how much better it is than almost anything I grew up eating, I actually liked getting pizza delivered. And sometimes I would get chain pizzas. But even then, Pizza Hut was always my least favorite.

One of the most overused food descriptions is claiming that a pizza's crust "tastes like cardboard." I'm not sure what percentage of people who make that claim have ever actually tasted cardboard; I'm guessing it's pretty low. But I will say this: if I ever actually do decide to eat cardboard, I would not be surprised to find that it tastes very much like Pizza Hut's crust.

However, crust, while an important part of a pizza, is still only a part of it. I can overlook a lousy crust if the toppings are tasty (like California Pizza Kitchen, for example).  But I have always hated Pizza Hut's toppings. Their cheese has always been a greasy, flavorless pool that seems to have been painted on. Their chicken has always been dry. Their bacon has always tasted like burnt bacon bits. I have not had a Pizza Hut pizza in more than 8 years and to be honest I figured I would never eat one again.

But it turns out there is something I like far more than I dislike Pizza Hut: Elizabeth.

Although I disagree with her about Scrubs and Glee, I can understand the entertainment value of those things. Although I think the Yankees are an Evil Empire, I can't blame her for being a fan; she grew up with them. (I love the Lakers, who are certainly unlikable.) But, something that I don't think I will ever understand, Elizabeth actually likes Pizza Hut. She grew up a couple hours north of New York City, she went to college in the Bronx, she lived in Brooklyn and worked in Manhattan for several years... and she still eats Pizza Hut. The mind, she boggle.

Monday, Elizabeth was feeling a little under the weather and said "You know what I feel like? I know you don't like it, but... Pizza Hut."

I pondered that for a couple minutes. We had Trader Joe's pizza dough in the fridge, I could have made us a pizza. And we live just a few blocks from Mamma's, which we both love. Why should we get Pizza Hut? But then I realized something: besides not feeling great (and haven't we all been sick and craved something bizarre?), she had spent several hours Saturday at my parents' house while my dad and I watched three college football games, and she did not complain once. If she wanted Pizza Hut, she definitely deserved it.

Besides, Pizza Hut has a new Monday promotion of two medium pizzas (with up to three toppings) for six dollars each. I asked her what kind she wanted and I went to pick them up. (I haven't had a pizza delivered - while sober - in years: there are a dozen pizza joints within a mile of me and some charge a delivery fee, including Pizza Hut. And, most importantly, you are at the whim of the driver's schedule which, during Monday Night Football, can be erratic.)

The kid who took my order over the phone was great and accomplished the order within 30 seconds. The guy behind the counter was very friendly. I was told my pizza would be ready in 15 minutes and it was, to the minute.  We got one with sausage and one with just cheese and even by the time I got home they were still very hot. So far, so good.

But, not surprisingly, I didn't really like the pizza. I have to say the sauce was tastier than I remember it being - slightly tangy and not too sweet. But the dough was thick and chewy and the cheese was the same oily, flavorless junk that I remember. If I did not know that the topping was supposed to be sausage, I never would have guessed.

Did I hate it? No. It's still pizza; there has only been one slice in my life that I ever truly hated. I slicked a couple of slices with some roasted tomato and pepper hot sauce and it was halfway-decent. And Elizabeth really enjoyed the pizza, which was the whole point of ordering it. (She finished off most of the slices the next evening for dinner.) Twelve bucks for two pizzas and her happiness is certainly a good deal.

But I still just don't think Pizza Hut is any good. Eight years hasn't changed that and I don't imagine anything ever will. Will I get Pizza Hut again someday if Elizabeth wants to? Definitely. Will I ever get it again on my own? Definitely not.
Posted by JustinM at 10:43 AM

The good news is that with 2 pizzas, you probably had leftovers to enjoy while watching Glee last night : )

I only had one slice and made myself empanadas. Although you are correct that Glee was on the TV, I was mostly watching the Lakers game online.