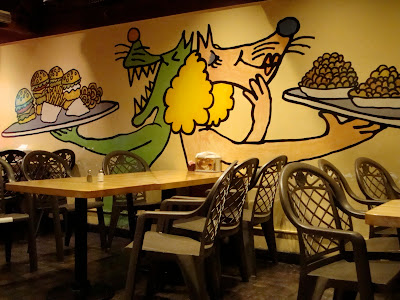 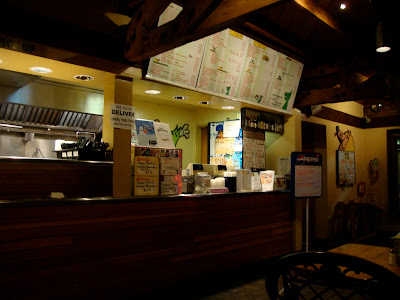 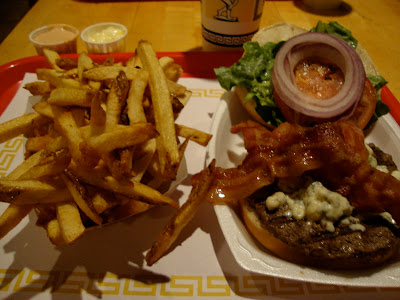 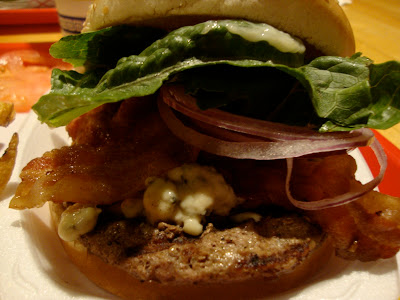 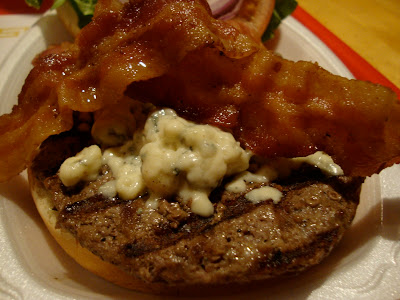 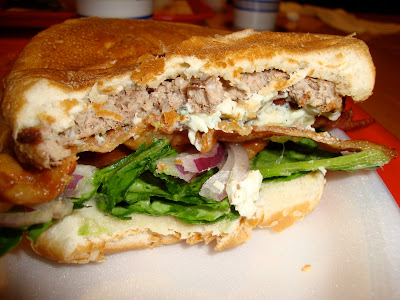 Wolfe Burgers has appeared several times on this blog over the years. I don't like the place nearly as much as I did several years ago, but it's still quite good. The condiment bar is still there, allowing you to customize your burger in any number of ways, and I know that two people can always fill up on food (and end up taking plenty of leftover fries home) and get change back from a twenty.

The other night I stopped in, not in the mood for my usual order at Wolfe Burgers - the turkey burger. There was a display advertising something called "The Ultimate Burger." I got excited. The proliferation of gourmet burger joints in Los Angeles over the last few years has elevated the game; when you hear of something called an Ultimate Burger, most likely it's not merely bacon and blue cheese, it's probably something exotic. I wondered what this would be. Wolfe Burgers has great onion rings, maybe they make a burger piled high with them? The owners are Greek, could it be a lamb burger, maybe with feta cheese and tzatziki sauce?

Turns out it it's just a burger with bacon and blue cheese.

At any rate, ordered it and took a seat beneath the flat screen television, admiring the Lakers' latest defensive effort [sic]. There was only one other table occupied and neither person at it was talking; I could hear my burger cooking on the grill. In less than ten minutes it was ready. It certainly looked pretty. I considered adding a sauce but did not. (Normally there is A.1. steak sauce on the condiment bar, but not this time.)

I took my first bite. The bacon was outstanding: perfectly crisp, slightly greasy, with very little unnecessary fat. It was some of the best bacon I have ever had at a burger joint. But there was too much blue cheese on the burger. Now, I like blue cheese, but this stuff was intense and there was so much of it in each bite that it was the only flavor I could taste.

So I scraped off some of it, shook a few drops of olive oil over the blue cheese that was left, and tried again. Much better. I ate the whole thing and turned my attention to the fries, not thinking I would be able to finish them. But I did. I was hungrier than I'd thought.

I don't think I will ever order the "ultimate" burger again. I may try another burger with bacon - something that I'd never done at Wolfe Burgers before - but the blue cheese just isn't necessary. Still, I'm glad I tried this burger. I was in a burger mood and it hit the spot.

As I was exiting, I held the door open for two police officers

"How you doing?" one of them asked.

The Two Guys are fans of Wolfe, though the food just may kill us... At lunch, the chili fries (extra spicy, add extra cheese, and yes, add onions too) is awesome and guaranteed to stick to your ribs for a good solid afternoon. Don't know how they get their burgers to have that unique flavor (maybe the grill is 30 years old, ala Pie N Burger), but the burgers can be habit forming.

We figure the fact that all the cops eat here is a good sign!

Nice review of Wolfe Burgers. Our burger club can't wait to check it out, even if it wasn't exactly the 'ultimate' experience!

Cool - I hope you enjoy it.

I have to ask, though - if you're going to that part of town, why not try Hutch's, Pie 'n Burger, or Green Street Tavern?

In my opinion, the most overrated restaurant in Pasadena.

Did you have to unhinge your jaw to eat that thing?

2 guys - you must be joking...
XXXXL - that was damn funny!
Tried the cheeseburger at Dog Haus a few days ago - a tough one to top, even with the Hawaiian bread twist.