Rick's Taco On A Bun & Tostada 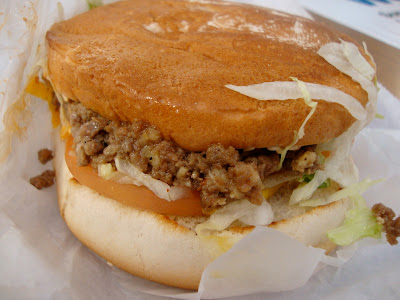 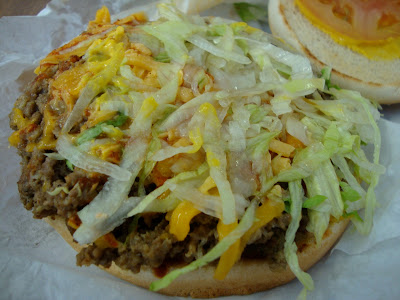 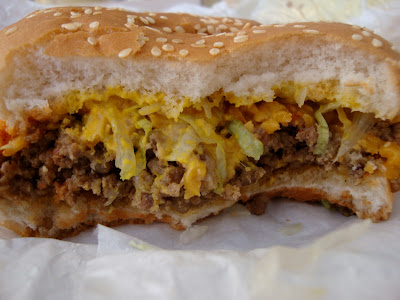 I've been going to Rick's since I was in high school. I love it. Their burgers aren't particularly special, their tacos aren't the best in town and their fries, more often than not, have been out of the oil too long to be crispy or even hot. But there is still something about the ritual to a Rick's meal that I love: the jostling for a parking space in the tiny lot, standing around on the sidewalk waiting for my food, texting my friend Murph - who may eat here more frequently than anyone in town - that I am at Rick's.

But despite having eaten at Rick's for half my life, there are still several items on the menu that I have never tried. The other day I decided to knock two of them off the list. The taco on a bun is something I had never thought twice about; I assumed it was just the ingredients from the taco placed into a bun. (Even by the age of 15, when I started going to Rick's, I had read Fear and Loathing in Las Vegas and recognized the "Breakdown on Paradise Blvd" chapter where Duke and his attorney grill the waitress about a taco burger. "I betcha your tacos are just hamburgers with a shell instead of a bun.")

Then last month I read a couple other websites that mentioned the taco on a bun (well, they called it taco in a bun, but close enough) and I learned that it had mustard as well. So, pretty much, it's a hamburger with crumbled ground beef instead of ground beef formed into a patty. Why not, I thought.

It tasted, not surprisingly, like the insides of a taco stuffed into a bun. The hot sauce brought it all together. But I didn't like it. The thing that killed it for me was the bun: it was stale. All I could think while eating it was Wow, these insides would sure taste nice in a taco shell instead of this dense bun. It was a good-sized sandwich, but I'll never get one again. 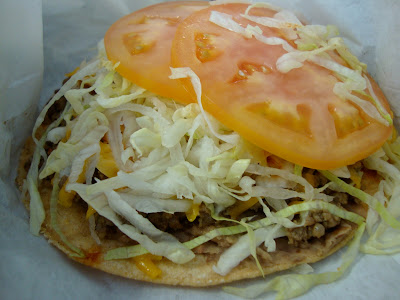 The tostada was simply a messier way to eat a Rick's taco. I did not have any complaints about it like I did the taco on a bun, but it's also not something I will ever order again. There is a reason I have been eating tacos, burgers and fries at Rick's for so many years: those are their best items.
Posted by JustinM at 9:38 AM

DO you ever dive in to the crazy french fry burrito? the Spuderito I think it's called?

Haha wow. This is more "American" than a hamburger. I think I'd only eat this if I was super drunk.

I'll take a torta any day over that thing.
As far as tostadas go, the beans are the reason I like them and they are the glue that keeps it from falling to bits - but alas, you don't like 'em.

Ben: Yes, more than a year ago I tried it for the first time since high school. I was not impressed.

Anna: I don't drink like I used to, but there was a time when Rick's was the greatest drunk food in the world. Better than Fatburger.

Nosh: I'm okay with refried beans on a tostada, but whole beans on a sope or in a burrito? No good.

Drunk food? A bit harsh. Still, I can honestly say that Taco Bell is good drunk food. I guess this isn't that far off, yes?

I have been a fan of Rick's for many years. A former co-worker had implored me for years to venture out of my comfort zone and try her favorite vegetarian burrito there. I am probably way too "meat centric, and a vegetarian burrito just sounded boring to me. She had long since moved away, but would still come to town periodically and would race to Rick's for this. I finally gave in and ordered a "Veggie E", which is Rick's lingo for a Vegetarian Burrito, with extra everything. I was amazed by this burrito. It far exceeded my expectations and has become my mainstay at Rick's. If you have never tried this, I implore you to consider it during an upcoming Rick's run.

Do you remember what's in it? I wouldn't enjoy tomatoes, but lettuce, cheese, onion... even refried beans would be okay. And, of course, Rick's hot sauce, which is awesome.

It has lettuce, cheese, mayonnaise, onions (I think), hot sauce and tomatoes, which of course you could omit. Somehow the sum total, through the magic of Rick's, is much better than the ingredients might suggest.