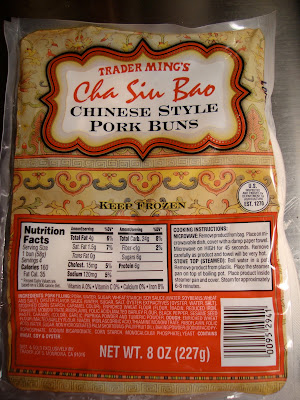 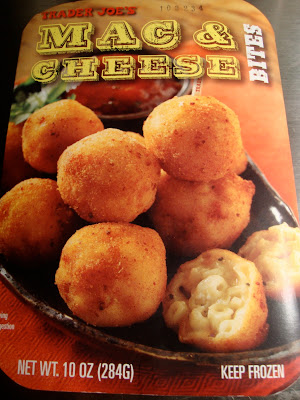 It was a good night for making something easy. As usually happens in these cases, I relied on a couple of Trader Joe's appetizers: one I've had before many times, one I've never tried. 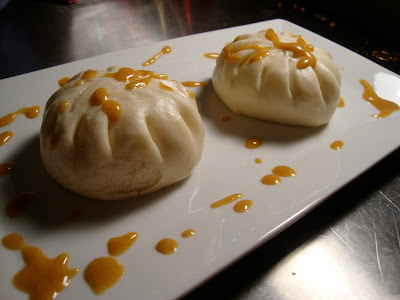 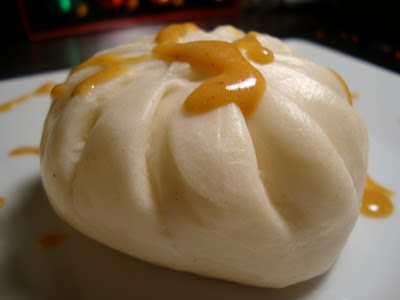 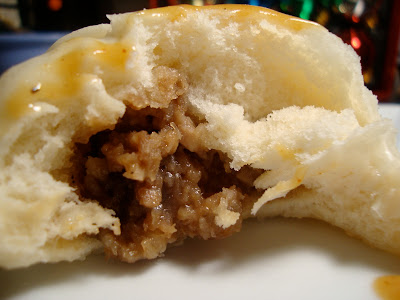 Trader Joe's - or rather, I should say, "Trader Ming's" - Cha Siu Bao Chinese Style Pork Buns are something I noticed about a month ago and have eaten no fewer than a half-dozen times since then. They may not be confused with pork buns at Empress Pavilion, but they are delicious, inexpensive, and easy to make. (I hate to admit this but I lost my bamboo steamer last year and have yet to get a new one; I make these in the microwave, which is certainly not ideal.)

I mixed up a sauce of sweet-hot mustard, chipotle, and Persian lime olive oil and drizzled it over the buns and the plate. It was a great complement to the dough and pork.

They were very good, just as they have always been. Obviously, they will be gone within a few months, never to appear again, in grand Trader Joe's style. 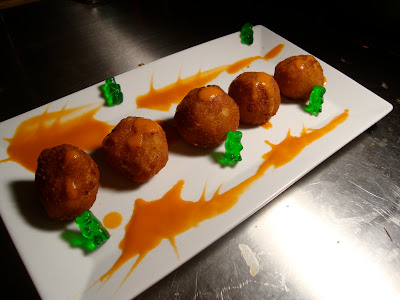 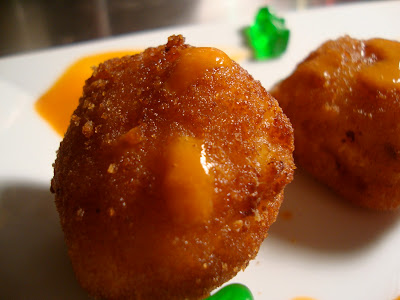 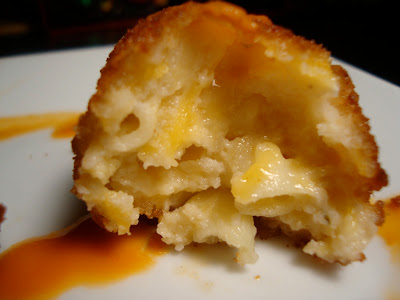 The mac & cheese bites are something I picked up the other day when I saw them for the first time. Over the last few years I've had fried mac & cheese at a few different restaurants; it's not one of my favorite things (I usually find it pretty bland) but it's never really bad. These were right in line with that: they were good but nothing special. They taste like halfway decent pieces of mac & cheese that have been unnecessarily breaded and fried. Which, of course, is what they are.

I had some leftover tomato and roasted red pepper soup in the fridge, which I heated up and spooned over the plate. I had planned to add some chopped basil, not only because I thought it would be tasty but because I thought the color green would look good on the plate. But all of my basil had wilted. So I used the only green thing available: gummi bears.

"What's wrong with you?" Elizabeth asked.

I have no idea.

UPDATE, 11:05: My buddy Phil sent me this picture this morning. I inquired why he had it; he explained that he came across it a while back and saved it because "you never know when that pic might come in handy...." 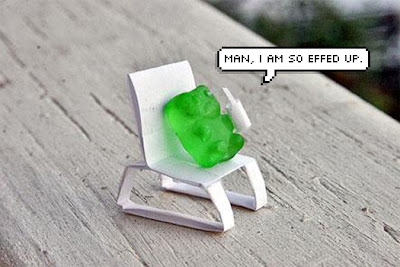 I'm tempted to swipe the picture with the green gummy guys and use it as my desktop background (with your kind permission, of course).
I've found that the best way to deal with such temptations is to succumb to them.
I noticed that the bears wisely avoided standing in the sauce.

chipotle and persian lime oil?! im obsessed with this idea!!

Nosh: You have my permission to use any pictures that I put up here. This is all for fun.

The green guys avoided the soup because they thought they might want to hop back in the bag with their non-green buddies to be eaten at another date. However, I decided I might as well eat them with the mac & cheese. Not surprisingly, they added nothing to the food.

Fritos: There is a store in Pasadena called Beyond The Olive; they have scores of California olive oils and vinegars. The Persian lime olive oil classes up a lot of things. (Although their sauvignon blanc vinegar is my favorite thing in the store.)

Mac n Cheeze? - where are the Food Police when we need them!!

Are those pork buns really nice? They look quite dry... The gummi bears just looked uncomfortable. Like a dad backstage at his 5-yr-old daughter's ballet show - 'I shouldn't be here. I don't know what to do! But if I stand still, perhaps nobody will notice me...'
I have to say, though, I'm noticing a distinct lack of prawns.

As long as you get some filling in each bite, they're fine. But if you take a bite of dough it can be dry - and microwaving them certainly doesn't help.

Let's just say you don't want to miss what I have scheduled for Monday, Emily.

Oh, that's just not fair. I have exams in a week and now I'm just going to spend the whole weekend speculating!!

I forget... Have you had a McRib yet? If not, what are you waiting for?!

Yes, I wrote about the McRib, one year ago this week. I did not enjoy it.

(BTW, you can always enter a word, such as "McRib" in the box in the upper left corner to search for it anywhere on the blog.)

I loved this review Justin! I'm always curious about TJ's frozen foods, and good to know their pork buns past the test. I totally agree with you on the mac-n-cheese balls being bland. I'm digging your resourcefulness in your sauce making. High five!

The mustard sauce was absolutely amazing! I probably could have drank it.