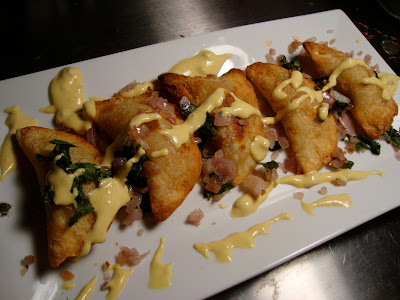 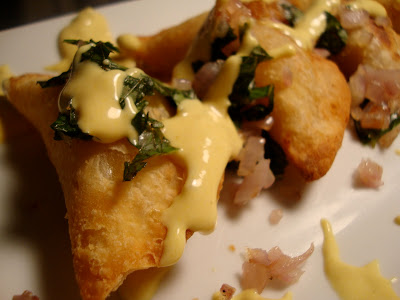 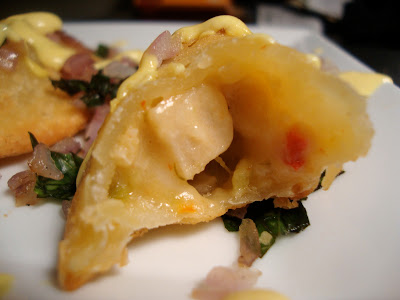 The other night I was trying to decide what to do for dinner, one of those nights when I had no desire to go anywhere nor exert any effort beyond heating something up while watching the Lakers. If I'd had a brick of cheese in the fridge I might have just sat on the couch and eaten that.
As it was, there was a box of empanadas tucked in the back of the freezer. I had forgotten purchasing the package at Vons; it was one of those sales where the item I wanted (mini egg rolls) was $3 but I could get any three similar items for $6, so I'd grabbed two more things, including these empanadas.
While the oven was heating I finely diced some red onion and sauteed it in a pan with a touch of olive oil and red wine vinegar. When the onion was soft I took it off the heat and mixed in a handful of chopped basil.
I was going to serve the empanadas with aioli, but decided I wanted something a little spicier, so I mixed a spoonful of hot mustard with the aioli. (These condiments may seem complicated but I promise you they took less than three minutes of actual effort to make.)
When the empanadas came out of the oven - ten minutes of cooking time leaves them frozen in the middle, eleven minutes makes them perfect, twelve minutes burns them as black as coal - I put half of them on a plate and spooned the red onion/basil relish over them, then drizzled the sauce over the plate.
They were delicious. Not just good for a $2 frozen product from Vons, they were good by any standard. They were much better than the egg rolls had been; I should have just gotten three boxes of empanadas. Next time.
Posted by JustinM at 10:10 AM

You are so the master of taking something frozen and turning it into an all star meal. Honestly...you could teach a class. It's a talent.

I would have preferred being smart or athletic, but I suppose being a less annoying version of Sandra Lee is good enough.

Love empanadas... if you leave in the E. La side you should check out Rincon Argentina in Glendale... amazing empanadas! Not fried... I think you'd dig the beef ones. I love the spinach ones.