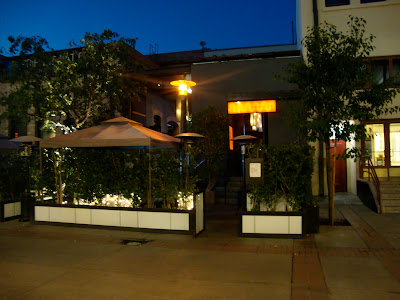 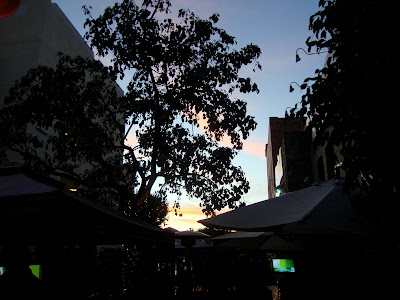 Walking down Colorado Blvd, you will miss the entrance to NeoMeze if you blink - it's down a hallway, barely noticeable from the street. But walking down Mercantile Alley (soon to be renamed Plotkin Alley, it appears) you probably won't miss it - it's an attractive patio with tables and canopies. If it's late in the evening, you definitely won't miss it: the music is loud.

NeoMeze replaced Sol y Azul - a place I always liked going, although their quality declined over the years -  a few years back. I went there with some friends a couple times at night but it wasn't my scene at all. I laughed with delight when I read Jonathan Gold's beautifully succinct description of NeoMeze's customers: "[their] neo-clubber clientele could be cast in a remake of A Night at the Roxbury."

I would still duck in every once in a while over the years, but never thought of it as a destination. The other night, though, Eliabeth and I were going out for a drink, wanting to do something different than we normally do, and I suggested we try NeoMeze. It turns out they have a happy hour seven days a week with some excellent bargains. 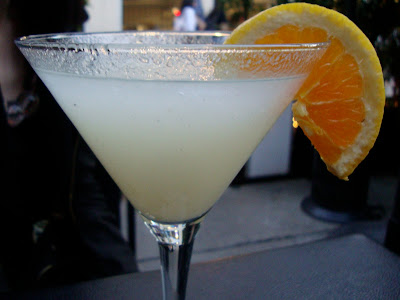 Elizabeth had a pear martini. Ordinarily this is $12 but it's half that during happy hour. I took a sip; I'm not a martini fan but I admit this was delicious. Elizabeth would have more than one. 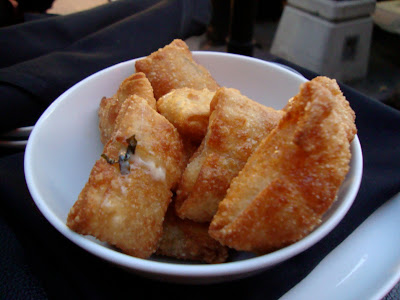 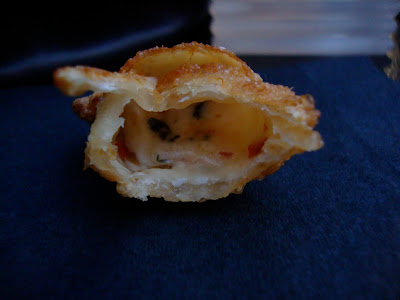 We got an order of cheese bouregs to snack on. All appetizers are $5 during happy hour. These bouregs - baked pockets of dough stuffed with slightly spicy cheeses - were fantastic. 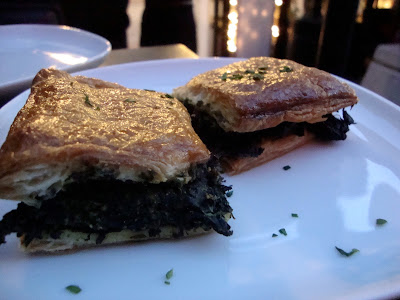 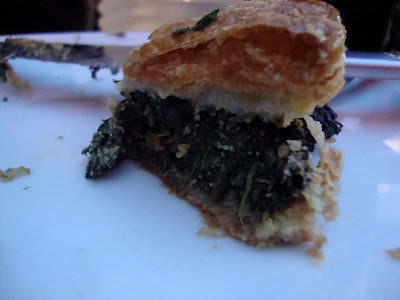 The "spinakopita," a Greek spinach pie, was also good, but very intense with the spinach. I've had spanakopita before where the dough was the dominant flavor; in this case it was most definitely the spinach. 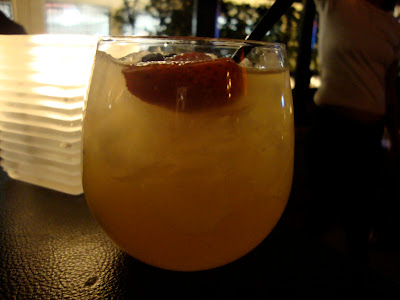 Our friend Murph came by and joined us. Murph is the kind of guy who will order a sangria even if the temperature is in the 30s. (Although he stays warm by wearing pajamas under his pants, which he dons the second the temperature drops below 80 degrees.) On this occasion he drank a white sangria. I took a sip and enjoyed it, or rather enjoyed an icy drink as much as I can on a night in late November.

We enjoyed hanging out at NeoMeze and I made a mental note to return soon and try some more food. I would only have to wait a couple days. 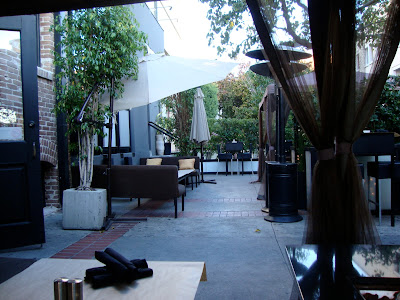 Murph sent me a text message one afternoon that he owed me lunch. I don't know why he felt he owed me this, but then again I did not bother to ask. I suggested we meet at NeoMeze for a late, happy hour lunch. It was much less crowded this time - since, you know, it was 3:30 on a weekday - and we sat down on one of the patio couches. It was a cold day and the waiter turned on the fire pit for us. I wonder if Murph will actually get a sangria today, I thought as I warmed my hands on the flames. 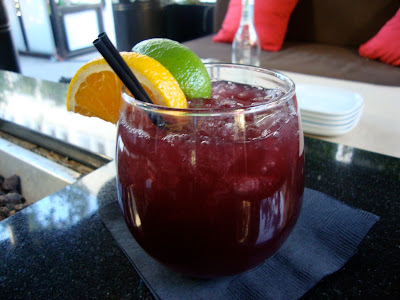 Of course he will. 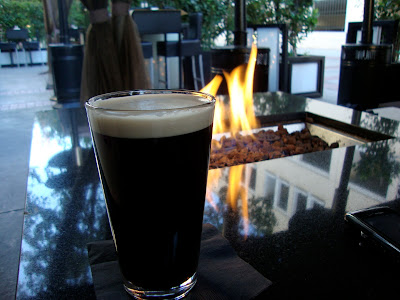 There is no substitute for a pint of Guinness on tap, but the draught cans of Guinness that NeoMeze serves aren't bad. 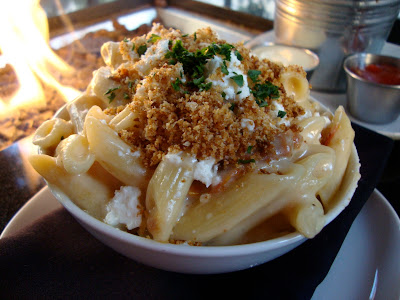 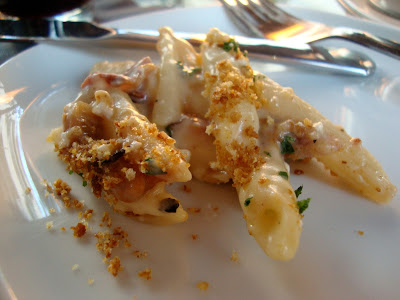 On my previous visit I had noticed a couple eating mac 'n' cheese and thought it looked fantastic, so we ordered some. The pasta is served with fontina, gouda, dried tomato and bread crumbs. It was certainly good but very creamy and filling. The two of us couldn't eat more than half of this. 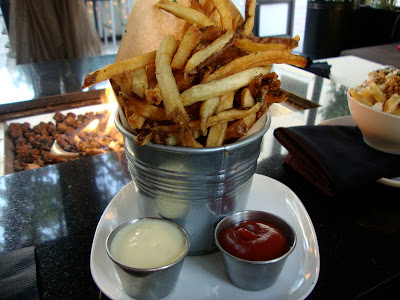 The fries were absolutely fantastic, some of the best I have ever had, served in a bucket and piled high, accompanied by aioli and ketchup. The skins are left on and they are fried long enough to turn crispy. I could have probably eaten this whole order by myself.

"These are so good," Murph said, "that I don't even care that there is a container of ketchup on the plate." (Although Murph dislikes condiments of any kind, he has a particular hatred for ketchup. He once took a bite of a McDonald's cheeseburger that had ketchup on it and immediately threw up.) 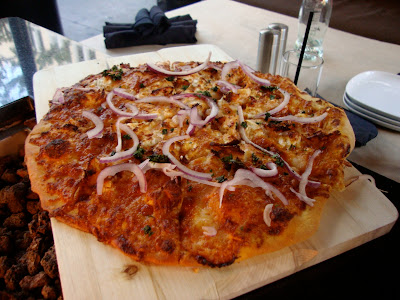 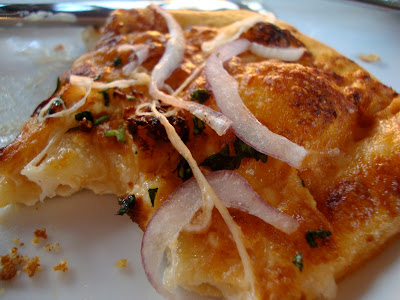 The waiter had told us that the "best bang for the buck" was the Tandoori chicken pizza. While I certainly liked the flavors, the pizza had been left in the oven a minute or two too long and the cheese was burned in many places. The regular price for this is $10, and I would have been disappointed at that price, but the $5 happy hour price made the overcooking not too big a deal. (Even if the pizza had been perfect, however, I would still consider the fries the best bang for the buck.) 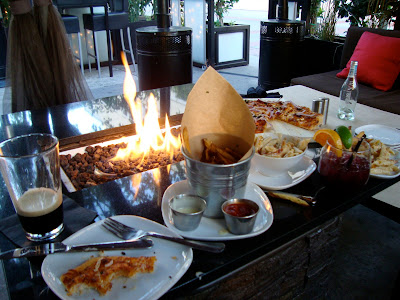 Two drinks and three large plates of food for $23. Not too shabby, especially considering we could have had another friend or two with us (not that we really have any other friends) and still had plenty of food. As it was, we ended up getting a box for half the pizza and mac 'n' cheese and giving it away.

I imagine I will continue to go to NeoMeze every once in a while at night when I'm in the mood for a drink somewhere outside of my normal routine, but I don't think it will become a regular dining spot for me. But I will gladly go back any afternoon for another bucket of those fries.
Posted by JustinM at 10:59 AM

I didn't even know they served food, thought it was just a club.

This place is on our "must visit" list. Do you know WHO IS THE CHEF?

Those pear martinis are delightful!

Anon: Well, if you walk by after about 10, I understand why you'd think that.

Two Guys: You should definitely check out the patio on a nice day for happy hour. I'm not entirely sure about the chef.

Liz: They sure are. Next time, though, I'm cutting you off after your eighth.

I always wondered about NeoMeze! What funny things the J. Gold says, eh? That spanakopita does indeed look intense and very puff pastry-esque. Well, I will have to pay them a happy visit next time I'm in town. Good stuff, Justin!