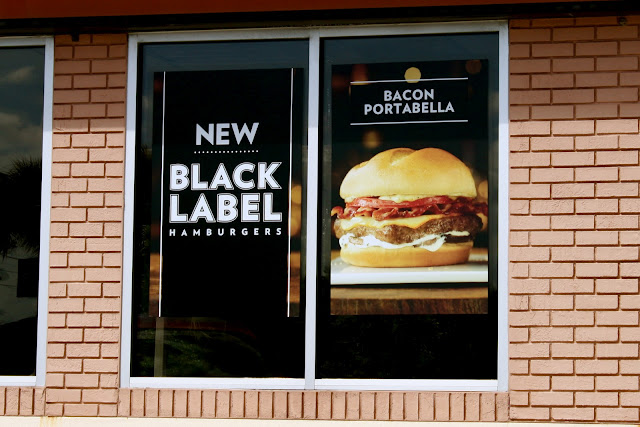 One of the funny things about a 3700 mile road trip - funny because I didn't even think about it when planning the trip - is that I have driven through many test markets for fast food promotions. Things that I'd read about months ago and shoved to the deepest corners of my mind (like the Hot 'N Spicy McChicken) because they were in parts of the country I had no intention of visiting.

Three blocks from Elizabeth's parents' house in Florida I drove past a Wendy's with a sign in the window for Black Label Hamburgers. That's right, I seem to remember reading something at the beginning of the year about Wendy's testing an "upscale" burger.

Did I expect them to be testing the burgers in a Florida town with less than 25,000 residents? No. Did I turn the car around and go back to try one? Of course. 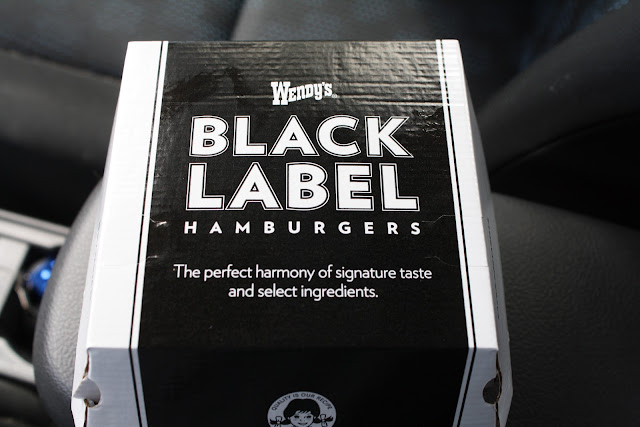 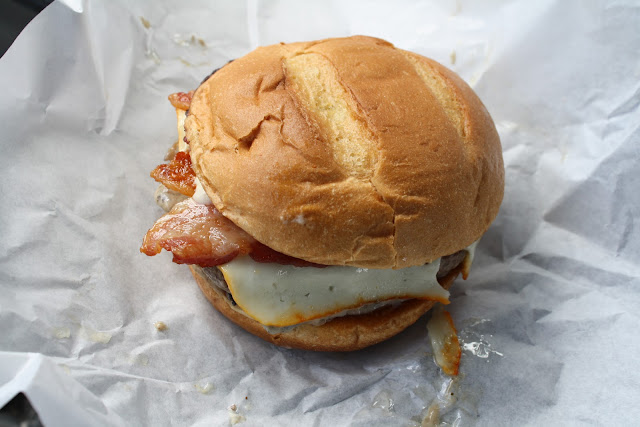 It was Easter Sunday and obvious the employees did not want to be there. I ordered the burger, had to repeat my order twice, and then stood around for ten minutes while the employees horsed around and made my food with no urgency whatsoever. (How do I know it was my food? Because I was the only person there.) When the girl finally handed me the bag I thanked her and she turned around without a sound, not even a smile, and walked away. I decided to take the sandwich to the car to eat.

There was a heft to the sandwich and it smelled good. Really good. I haven't been a fan of Wendy's for a few years now; the direction they've been taking seems to be mostly high-salt and low-quality food, trying to copy McDonald's rather than stake out a claim as a good fast food joint, which is how I used to view them. So my expectations were not high and I was surprised that this sandwich actually smelled like cheese and mushrooms. 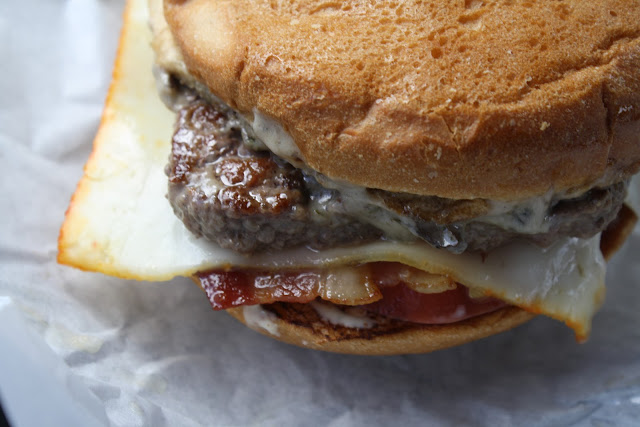 The burger comes with bacon, Muenster cheese, tomato, pepper sauce and a "mushroom sauce." I really like Muenster cheese and often place it on burgers and sandwiches I make at home, but don't remember the last time I had it on a restaurant burger, and certainly have never seen it offered at a fast food joint. 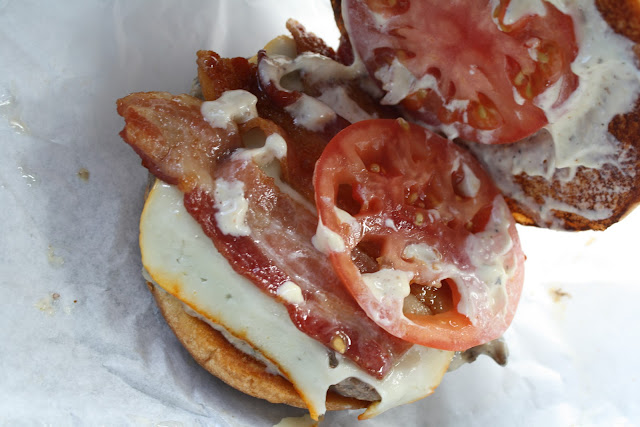 Of course I removed the tomatoes. 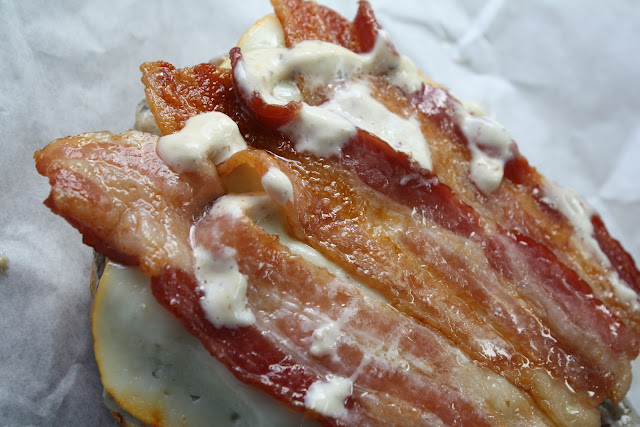 Wendy's has often served crispy, high-quality bacon on their burgers. But not this time. Of course, it was still better than at least 90% of the fast food burgers out there, 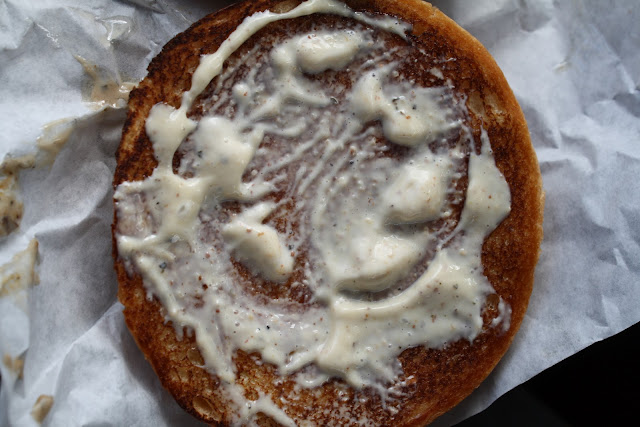 The pepper sauce tasted slightly of pepper. It's hard to judge it, though, because it was overpowered by: 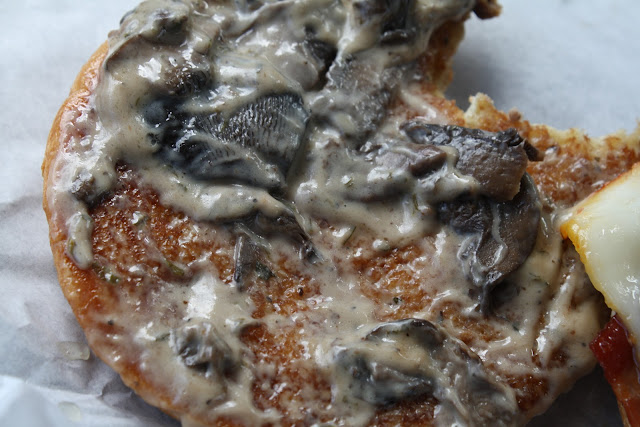 The mushroom sauce. There were a lot of mushrooms on this thing. I'm not the biggest fan of mushrooms but I didn't mind these - once I took off a few of them. 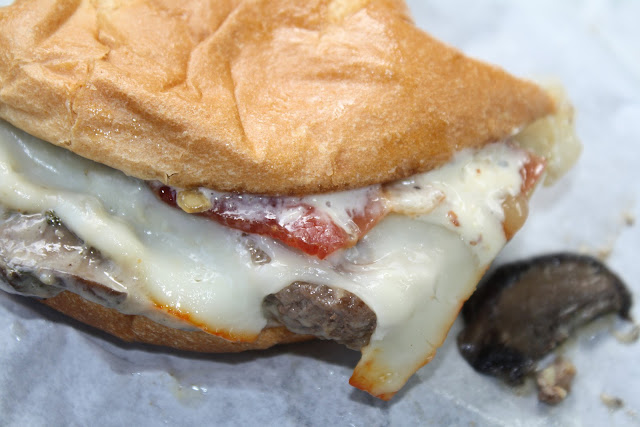 This was the best Wendy's burger I have had in a long time, even though that's not saying much. But would I get it again? No. It was just over five bucks. I'm not going to call that expensive, considering the direction a lot of fast food chains have been taking lately, but it is by no means a good deal. If I'm going to pay that for a burger, I can think of a lot of other places I'd rather go, like In-N-Out or Five Guys. Or one other place I've discovered on this trip that I will write about in the coming weeks.
Posted by JustinM at 9:30 AM

Justin,
If you're heading up the East Coast from Florida, I'd be happy to buy you a crabcake in Maryland.

Have fun in Florida Justin!!!

Jai, I was already in New York by the time I got your offer, thanks. We thought about stopping in Baltimore for the night and catching the Yankees-O's game but we were tired and anxious to get to our new place so we didn't stop.