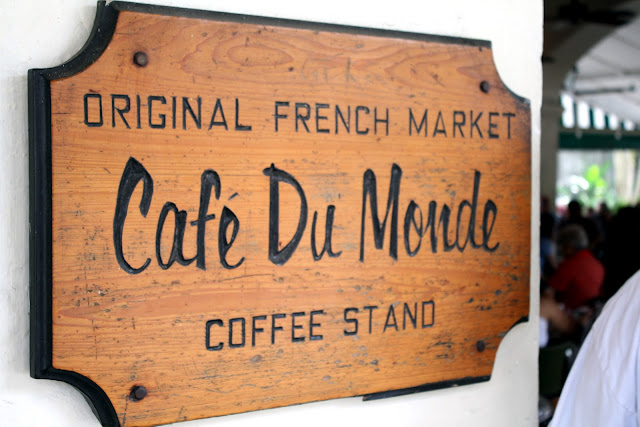 I have mentioned, more than once, that Charles Kuralt's America is probably one of my ten favorite books I have ever read. For those of you who have not read, or perhaps never even heard of this book, I will summarize: when Charles Kuralt retired from CBS he decided to spend a year living each month in one of his twelve favorite places in America. To start the year he spent the month of January in New Orleans:

"'Unique' is a word that cannot be qualified. It does not mean rare or uncommon; it means alone in the universe. By the standards of grammar and by the grace of God, New Orleans is the unique American place."

Most mornings in New Orleans he stopped by Cafe Du Monde. I'll let him explain:

"You can buy beignet mix and cans of distinctive chicory-flavored Louisiana coffee and take them home, but the sugary square doughnuts and the cafe au lait never taste the same as when they are brought hot to your table and served in the open air beside the crossword puzzle and the basketball scores there at the corner of Decatur and St. Ann. There is never an hour of the day or night when beignets and coffee are not tendered at the Cafe Du Monde, but even if you have to keep your jacket buttoned against the cool fog rolling over the levee into the market squares, the hour after sunrise is best. Then, late revelers and early risers meet. Once I was among the former, but in my old age I have discovered that the coffee, the best in the world, tastes even better after a little bit of sleep."

My own experience with Cafe Du Monde is less extensive; I visited it in 2000 when I was in New Orleans for Mardi Gras, when my friends and I had to wait more than half an hour for a table and I wasn't even hungry. In 2004, when my friends and I hit up New Orleans for Jazz Fest, the only person who asked for a souvenir was Tracie and she asked for a can of chicory coffee from Cafe Du Monde, so I stopped by and bought one for her, but I did not have any food or coffee myself. Other than those two trips, I don't remember any others, though I know I have walked by the place dozens of times.

But Elizabeth had asked me before we arrived in New Orleans if she could just have beignets from Cafe Du Monde for every meal. I told her no, but promised that we would go at least once. We attempted to on the first day we were there, but it was next to impossible. Lots of people were still in town after the NCAA Championship Game and the crowds were even bigger than they had been when I was at Cafe Du Monde during Mardi Gras.

But the next day, after we took a paddle-wheeler on the Mississippi, we stopped by the cafe and were able to grab a table. 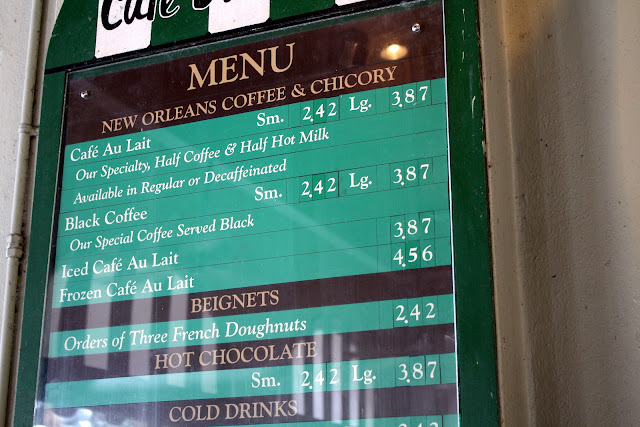 The menu is not complicated because it doesn't need to be. When you can do two things - coffee and beignets - better than anyone else in the city (or perhaps the country), you don't need to do anything else. 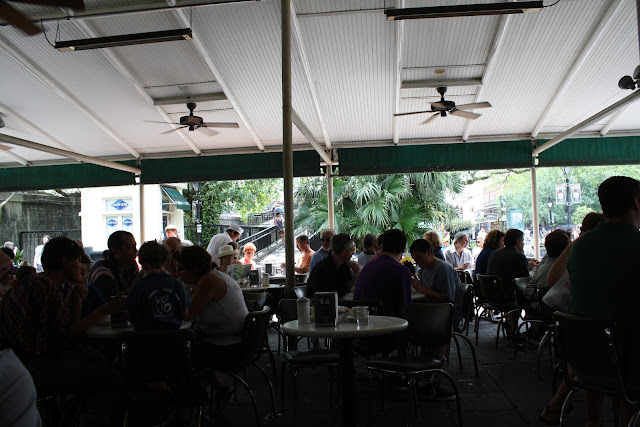 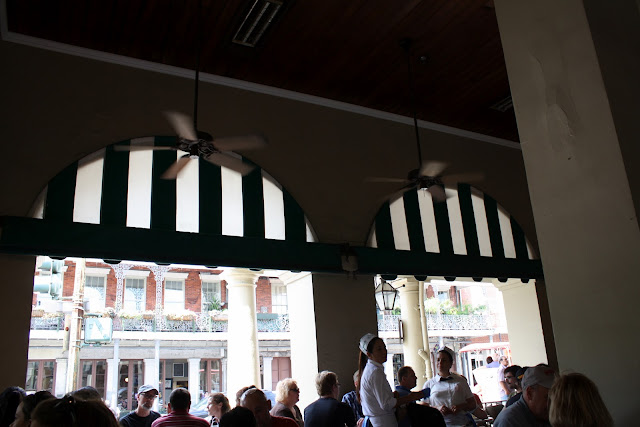 This is actually considered not crowded. 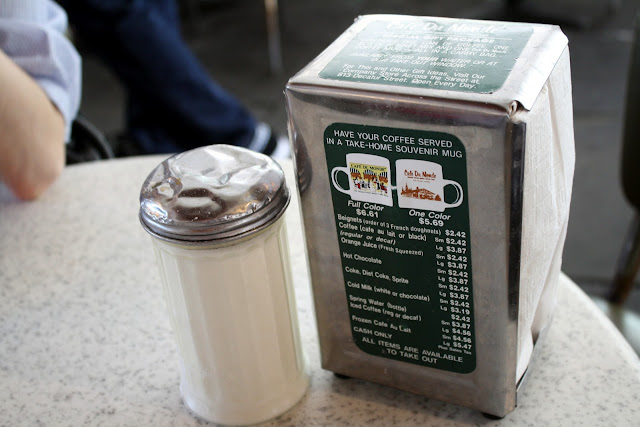 The menu is printed on the napkin dispenser but it wasn't necessary: we'd known for weeks what we were going to order. 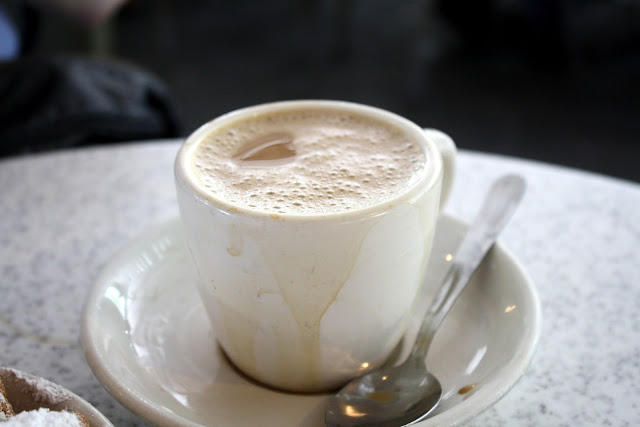 Elizabeth had the cafe au lait, and she loved it. 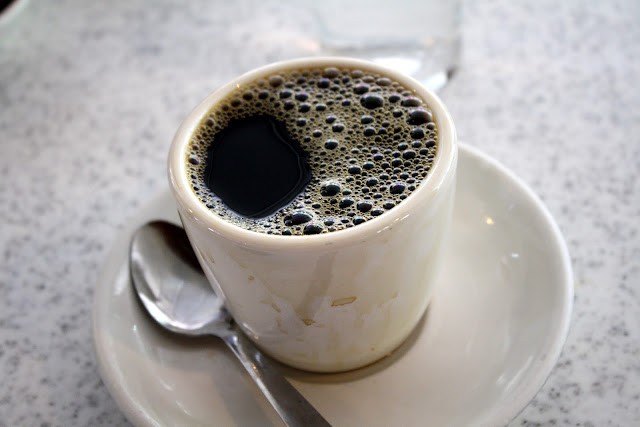 Just black coffee for me, but I also loved it. 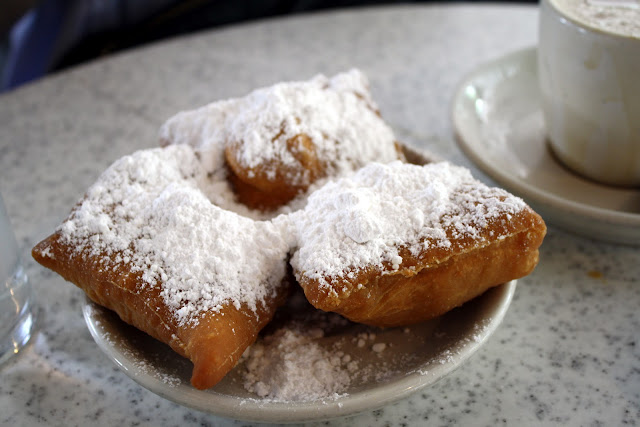 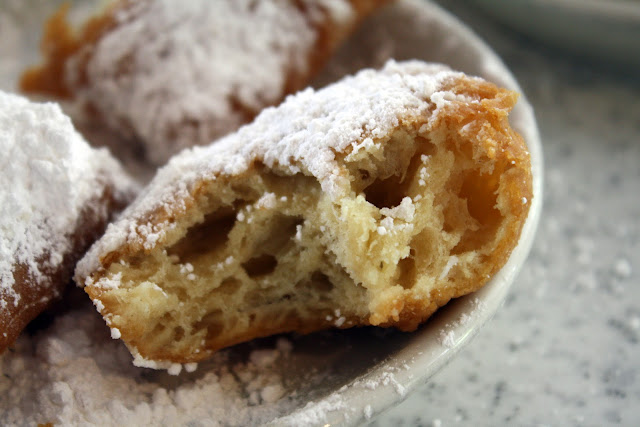 And an order of beignets. Brought shockingly hot to the table, almost too hot to handle, the pillowy, fried dough under an avalanche of powdered sugar is as delicious as almost anything you will ever eat. Do I even need to try to describe the taste? Are the pictures not worth thousands of words? 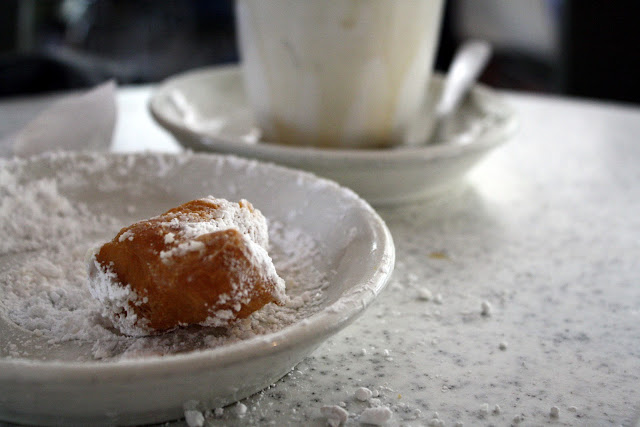 Those of you who wrote yesterday that you have never been to New Orleans and want to go all have my sincere hope that you make it one day. I find the place magical. But on the other hand, you're kind of lucky: you don't know "what it means to miss New Orleans," as the old Louis Armstrong song goes. Memories of meals like this will haunt you. (But... it's worth it.)

Wow is all I can say. I kinda want to lick the screen.

NO is one of my favorite places to visit. When we cannot get a table in Cafe du Mond, we get coffee and beignets to go and take them over to a bench by the river...makes we want to go there right now!

So wait! They are doughboys?! They look and sound like doughboys. RI has some of the best doughboy places around. :)

I don't know. I've only heard doughboy used to describe American soldiers in WWI and Ice Cube's character in Boyz in the Hood. But if doughboy is a fried ball of dough, I suppose it is the same.

However I like saying beignet more, as it makes me feel erudite.

If there is anyone that doesn't want to go to NO, reading/seeing this post will change their mind.

I should have eaten beignets for every meal while we were there. Even then it probably would not have been enough. They were amazing. The coffee was delicious as well. I miss you beignets!

Oh boy. Talking to the beignets now, are we?

I wondered if Cafe du Monde was coming up when you told me to watch for this post. I had already told my boyfriend that I plan to eat beignets every single day of our trip. I kind of doubt I will complete my mission, somce there will be so many other delicious foods to try, but I plan to do my very best. =)

I grew up in New Orleans and this place serves up decent enough cafe au lait and beignets, but it's far from the best. Basically, locals just take out of town friends there.

I don't believe that there has always been black coffee served here either. Probably an addition for the tourists. Not a lot of people there drink black coffee.