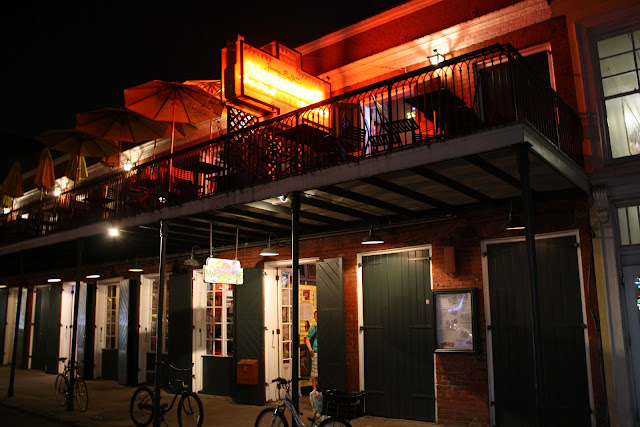 So, you may be asking yourself, he was adamant about not eating at a chain on the San Antonio Riverwalk, but in New Orleans, one of the great dining cities anywhere, he eats at a chain?

And it's a fair question. But I've been to this Margaritaville twice before: once when I visited New Orleans with some friends for Mardi Gras when I was 21, and on my 24th birthday when my friend Tom and I drove around the country together. And those were two of the best times of my entire life. So I have nothing but good associations with this place. On our first night in New Orleans, after getting a couple of Hurricanes and random beers, Elizabeth and I wandered around a little trying to decide what to get for dinner. (We could have gone anywhere; I've never had a bad meal in this town.)

When we passed Margaritaville I said "Let's go for it." 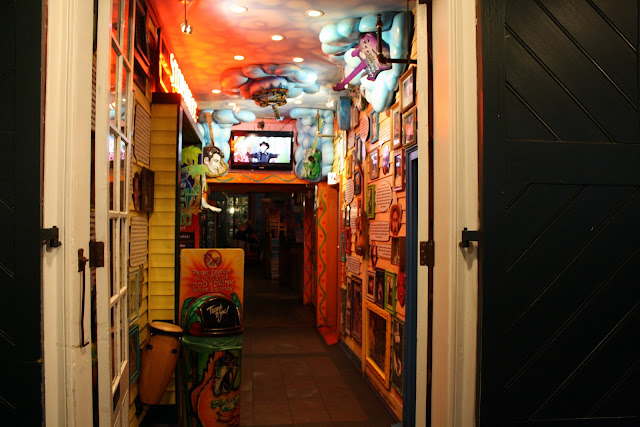 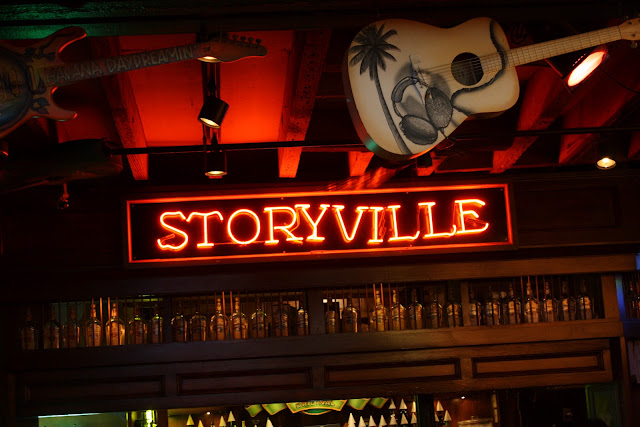 I first poked my head into the bar - the Storyville tavern - to see who was playing. On that birthday occasion I first saw Lynn Drury playing here, doing a version of "Angel From Montgomery" that I can still hear in my mind. But alas on this occasion it was a guy banging out "Friends In Low Places" on the piano. Not the same. (A friend of mine came in once to find Jimmy himself playing to a half-empty house. That would have been cool to see.) 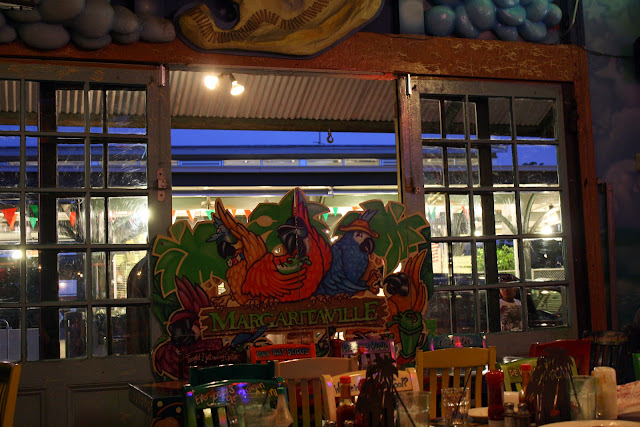 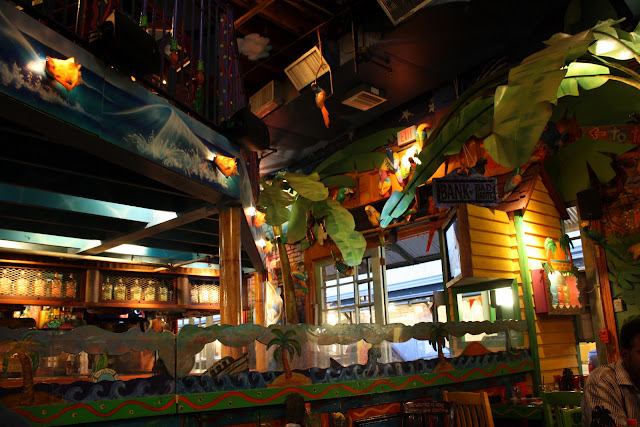 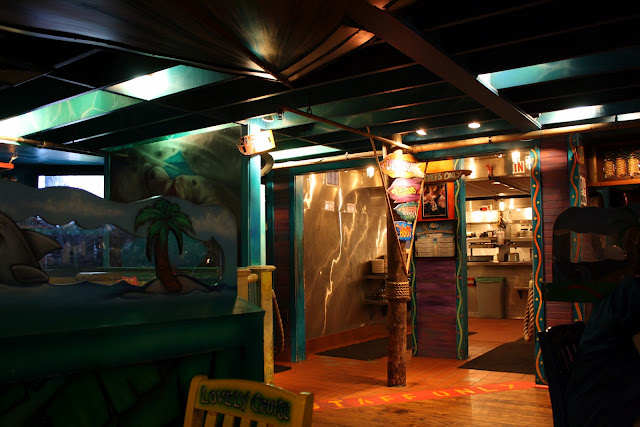 The interior is what you'd expect: island-themed decor. A little cheesy, perhaps, but in New Orleans the laid-back vibe seems appropriate. (I've also been to the Margaritaville in Las Vegas; that one just seems like a theme park.) 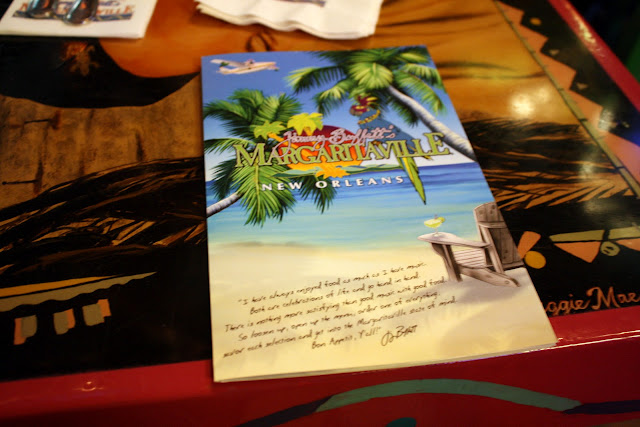 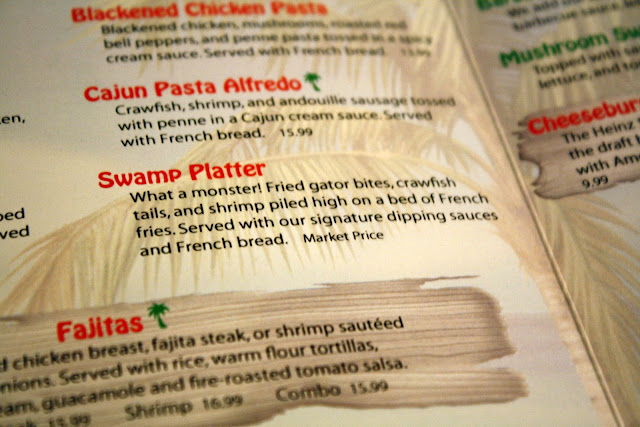 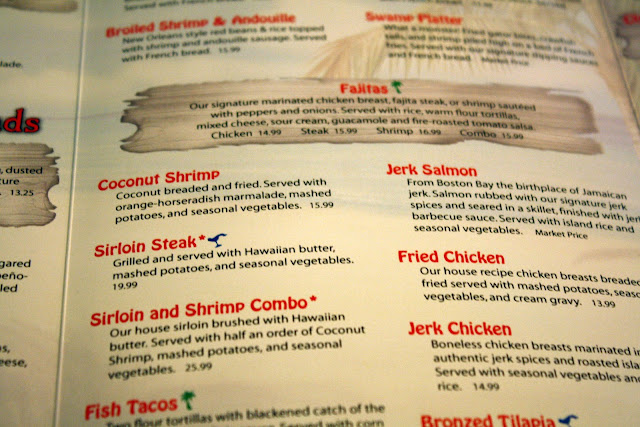 I've had the fried gator at Margaritaville - sorry for the cliche, but it does taste just like a tough piece of chicken - and I also once had a pulled pork sandwich with a guava barbecue sauce that was delicious, but on this occasion the "swamp platter" caught my eye. Gator, crawfish, and shrimp? Sounds good. 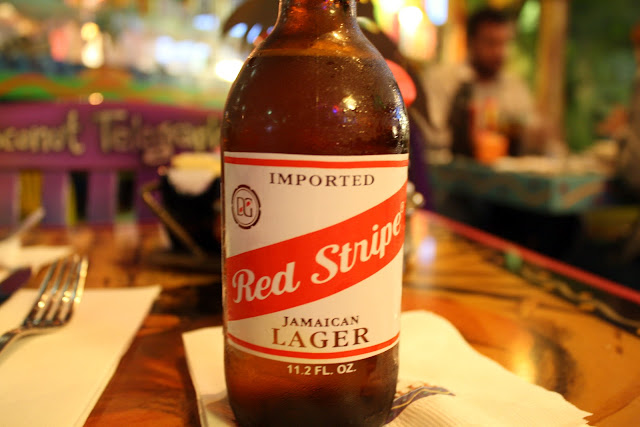 A cold Red Stripe, already sweating by the time it hit the table. Have I told you how much I love New Orleans? 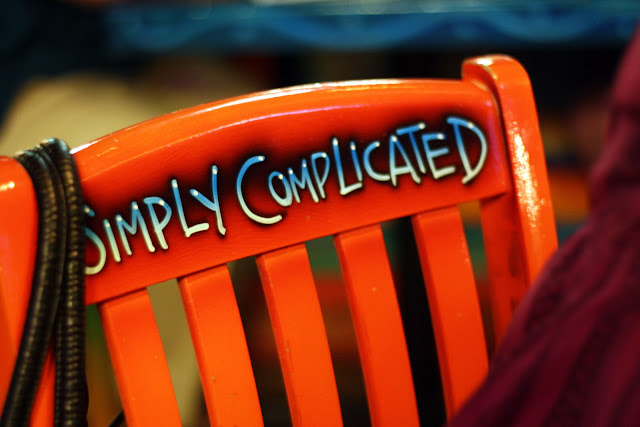 The chairs are painted with the titles of Jimmy Buffett's songs. This was Elizabeth's. 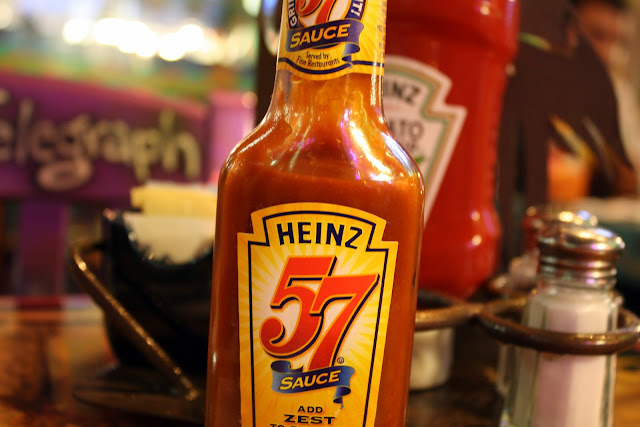 Buffett fans know why this was on the table. 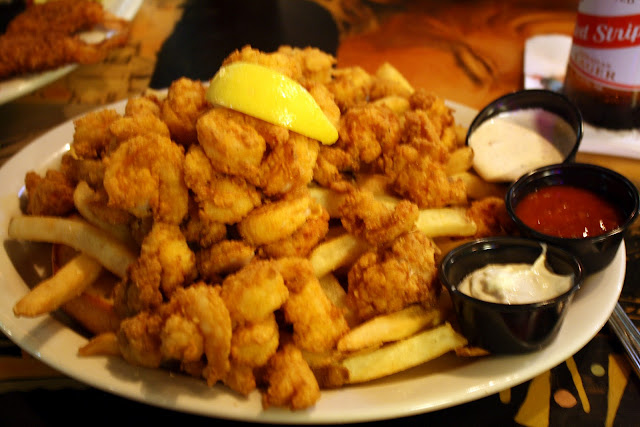 The pictures of my entree all turned out poorly and for that I apologize, but I am using one anyway because you have to see this monstrosity: the fried seafood was piled on top of fried potatoes, towering more than seven inches high. The gator was the same tough-yet-tasty meat I remember from a decade ago, the shrimp were good and the crawfish were great. The fries were lousy but who cares - I barely ate any of them. When I was done eating I took a picture of what was left and sent it to a few friends - I still had enough food left to feed one, perhaps two people. 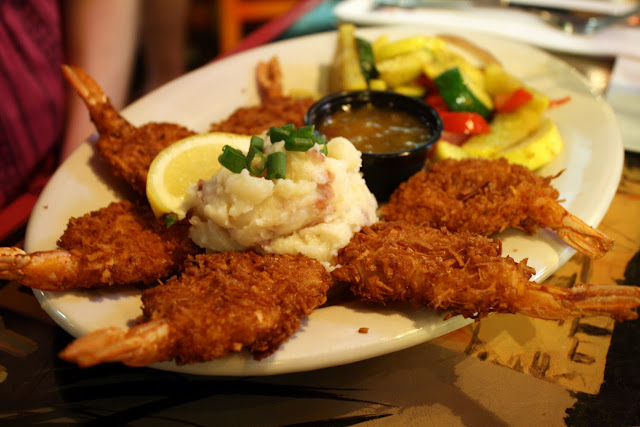 Elizabeth had the coconut shrimp. She gave me one of them; as much as I love shrimp I have never been a big fan of coconut shrimp. But I really liked this. The orange-horseradish marmalade was a wonderful complement. And it was nice to take a break from my healthy platter to eat something fried.

It was nice to be back at Margaritaville, but on my next New Orleans trip I won't be stopping by. The food was good, but there is much better food to be had elsewhere. It was like hanging out for an evening with someone you knew casually back in high school: it was nice to remember all the fun we used to have way back when, but we don't need to ever do this again.

If it suddenly ended tomorrow I could somehow adjust to the fall
Good times and riches and son of a bitches, I've seen more than I can recall.
Posted by JustinM at 10:38 AM

I hope that Elizabeth, at least, got a margarita…

dang thats a lot of fried seafood. and i love the lemon slice right on top.

Mindful: Nope, she had an iced tea. We had just driven in from San Antonio - that was the most mellow night I've ever had in New Orleans as an adult.

I hope there is Cafe Du Monde!!!

That actually looks like it would be a nice place to hang, especially if it's not too crouded with drunken rednecks. :) St. Louis has a Sammy Hagar-themed restaurant, but I've never been brave enough to check it out (not to mention I much prefer Buffett to Hagar!)