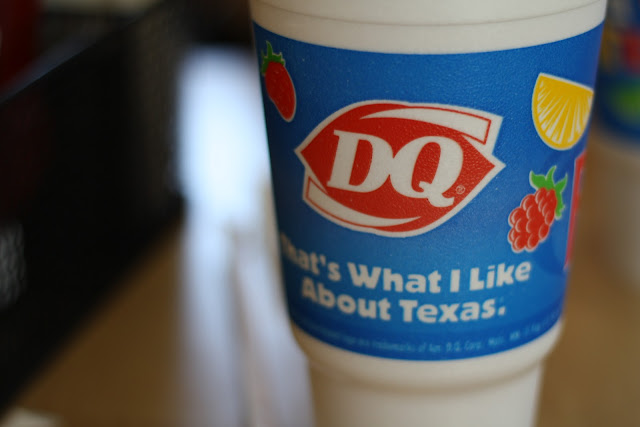 Note: I should have done this post yesterday, before the San Antonio post, to keep things in chronological order. My bad.

I've done some pretty long drives in a single day before. Many times I've driven from Portland to Pasadena in one day, ditto Boulder to Pasadena, both around 1000 miles. I once drove from Auburn, CA to Rock Springs, WY (800 miles), only stopping because I got caught in an ice storm. Kansas City to Lexington, VA (940 miles)? Sure, I've done that, too.

But never have I experienced a drive that felt longer than the one through West Texas from El Paso to San Antonio. There is pretty much nothing to see and the towns - if you can call them that - are few and far between. At one point, when we started getting hungry, Elizabeth took out her iphone and checked for restaurants. There were three options within 100 miles: McDonald's, Taco Bell, and a sit-down restaurant that was only open for dinner.

Eventually - and by eventually I mean about three hours after we got hungry; with the cruise control set at 85 you can do the math - we made it to a town with a restaurant that sounded interesting. It was closed on Sundays. Of course. But there also happened to be a Dairy Queen in town. Before the trip, Elizabeth said we had to stop by a DQ for a dipped cone and I promised her we would. (Unlike Cracker Barrel, a brief ice cream stop at DQ seemed harmless.) This seemed like the perfect time.

I've never actually eaten at Dairy Queen. I know I've had their ice cream before, and I even remember stopping by a DQ a few years ago in Sacramento because my dad really wanted a soft ice cream, but I really did not know anything about their food. 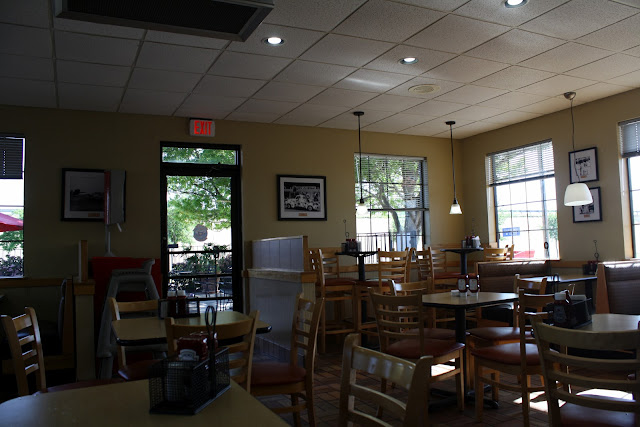 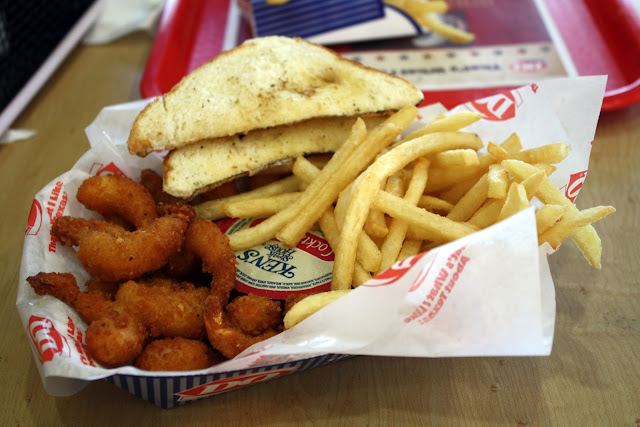 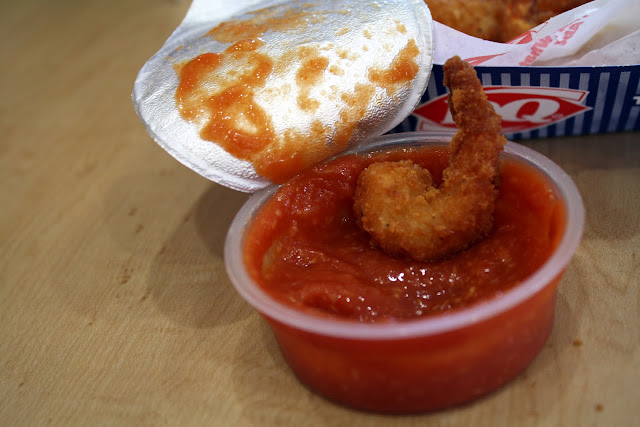 I wasn't in a burger mood so I ordered the popcorn shrimp basket. For an instant my mind flashed back to a fried shrimp meal I ordered almost ten years ago in similar-looking terrain in Montana; it made me violently ill. But then again those were hand-breaded shrimp in a diner and I was relatively certainly these would be coming out of a giant plastic back from the freezer.

They were just fine. They certainly looked better than the burger Elizabeth ordered. The shrimp were not as good as Popeyes nor any of the fried seafood you will be reading about soon, but considering this was pretty much our only dining option and I was incredibly hungry, I have no complaints. 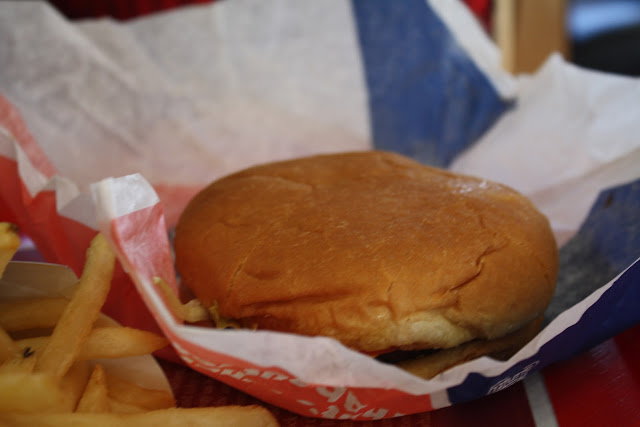 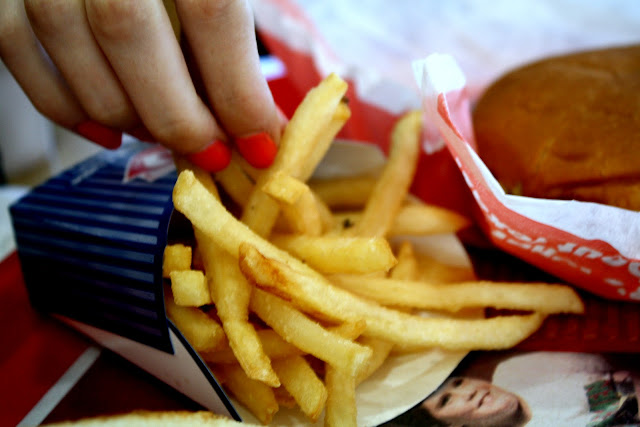 Here are Elizabeth's burger and fries. They aren't very good pictures, but do they really need to be? You can figure out what's going on here.

I would go back to Dairy Queen for an ice cream cone, but I do not plan to ever eat at one again. However, if I find myself in the middle of nowhere and it's my only option, I wouldn't be opposed to another order of fried shrimp.
Posted by JustinM at 11:20 AM

"I've never actually eaten at Dairy Queen" - Not true. We did a stop at the one in Oceanside on our fast food tour. We had the chicken strips and the burger with jalapenos (can't remember the name).

You are correct. I completely forgot about that. The Flamethrower burger. We split it into quarters and all four of us disliked it. The chicken strips were good, however.

never ate real food there, but the blizzards are the stuff dreams are made of!

We definitely have different kinds of dreams.

Dude, you didn't get a blizzard? Only thing worth it at DQ, if you ask me. Other stuff is just par for the course fast food.

No. I hate chocolate (maybe they don't all come with chocolate but it seems like it) and I rarely eat dessert... and never with lunch.

DQ is probably my favorite cheap fast food burger, but then, that's here in the 'big city' ... I'm wondering if you encountered any Stuckey's or Casey's on your travels -- both middle-of-nowhere staples of the weary traveler.

We saw Stuckey's signs, but I've never been to one. I'd never even heard of Casey's, though. (They are all farther north than we were on this trip.)

My (new) favorite road trip fast food chain burger will be featured here tomorrow. Had it for the first time and loved it.

Guessing you went to Whataburger

"It is the future you see."

I saw your post on The Implusive Buy too -- but I think Whataburger is 'fast casual' and not fast food, but I guess that's splitting hairs...

That's an interesting point, Mike. But I'm not sure, is there an actual definition of fast casual that is universally accepted? At the first Whataburger they called your name and just handed you the food even if you were eating in, but at the second they actually brought it to your table, which I think of as being a hallmark of fast-casual.

The food is a little more expensive than your typical fast food and it's cooked to order... but usually I think of fast casual joints as being a little bit nicer-decorated with more formal seating inside, and both Whataburgers were pretty sparse.

I guess I just don't know.

Also, both Whataburgers had drive-throughs, which I definitely do not associate with fast casual.

(Despite the fact that some Panda Express locations have them. I've never been to one of those but am curious how they work. I guess you just tell them what entrees you want as part of your combo, even though you can't see the entrees.)

what's with the fat kid under the fries?

What are those triangular-shaped things next to the shrimp? Is that, like, toast?

Texas toast. I did not have any.

Cool, thanks. If I eat there again I will definitely eschew the fries in favor of onion rings.

Apparently Texas Toast is the side dish of choice everywhere in the south. Seriously, they serve it with everything. Not that I mind. I usually took Justin's.