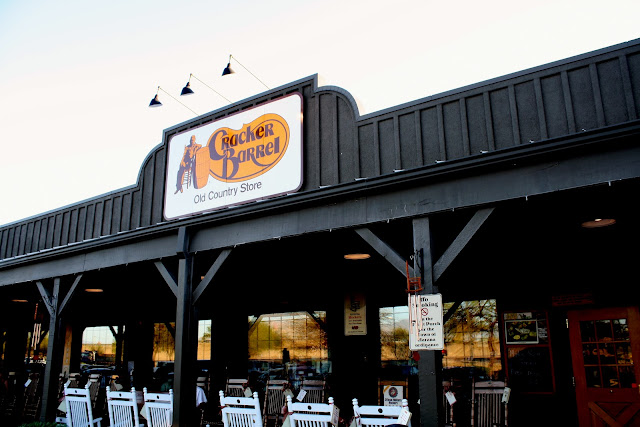 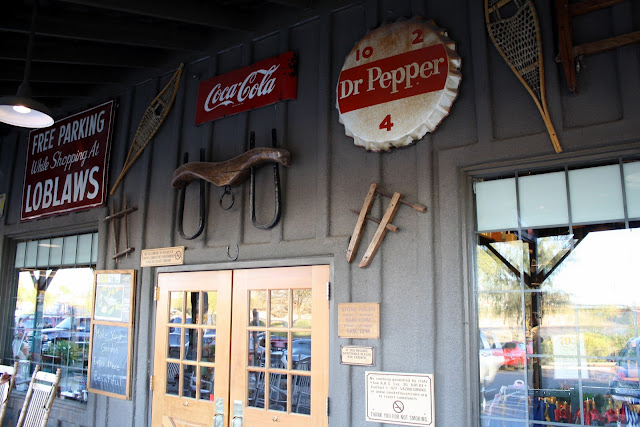 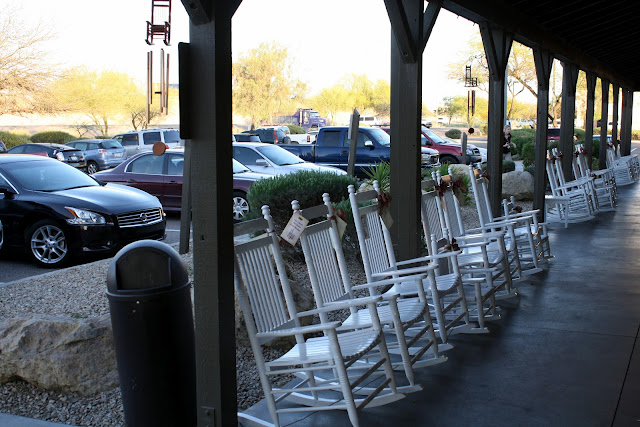 Years ago, Elizabeth told me she was craving Cracker Barrel. I said I didn't think there were any in California and this surprised her; we looked and sure enough I was correct. I didn't ever remember going to a Cracker Barrel. In fact, all I really knew about the place is a vague memory from a few years back that there was evidence they segregated their customers by race when seating them.

But when we were planning our trip and she said she really wanted to eat at Cracker Barrel, I said of course we could... once. As it turned out, we were hungry and the car needed gas in eastern Arizona on the first night of the trip and right when we pulled off the highway we saw a Cracker Barrel. 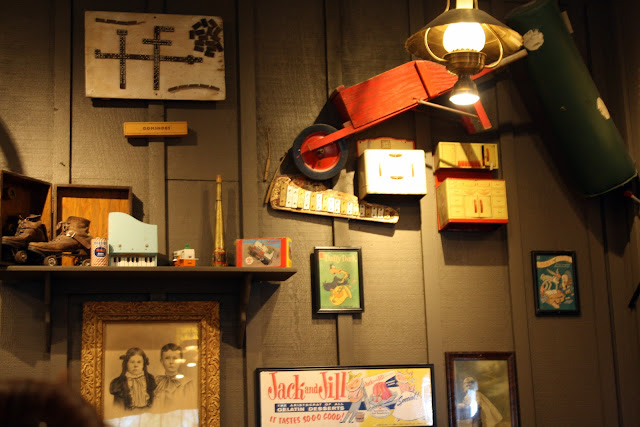 There was a strong recognition when I walked in: the "country store" portion of the building, selling hard candy, cheesy postcards, and souvenirs that fall somewhere between patriotic and jingoist. I realized that technically I had been to a Cracker Barrel before: on one of the road trips I took in my early 20s I stopped in one night, took a look at the place and left. Now, a decade later, here I was again. 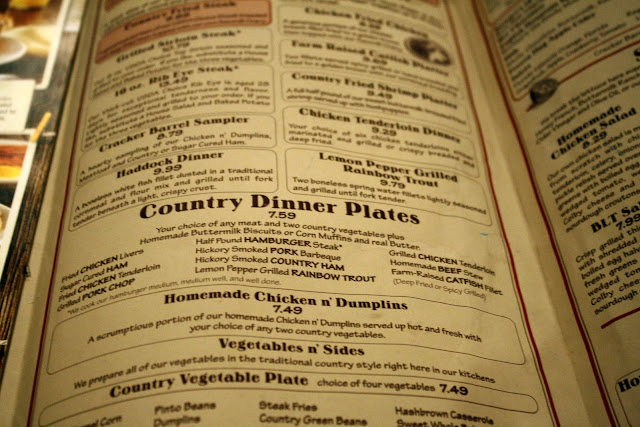 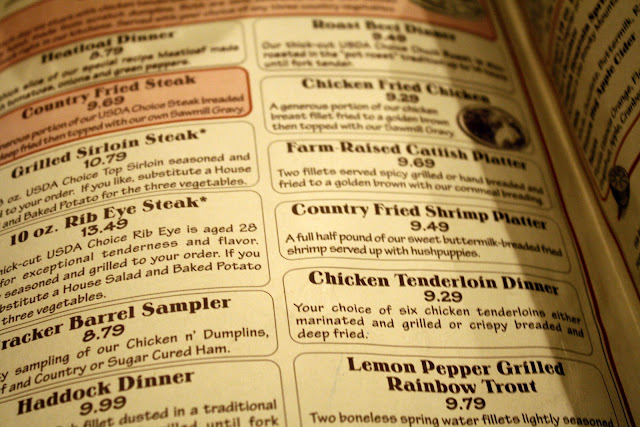 Did you ever read Bill Bryson's The Lost Continent? It's my favorite of his books though I admit it's pretty mean-spirited; he takes a little too much delight in making fun of people. So I don't want to do that here... but it's impossible for me to write about the place and not mention that quite a few customers - I would even guess the majority - were obese. I'm talking morbidly obese. I never thought I would see a restaurant with a higher percentage of obese people than Claim Jumper, but this particular Cracker Barrel put any Claim Jumper I have seen to shame.

Of course, many of the menu items are served with not one, not two, but three side dishes. It's possible to get a fried chicken dinner with steak fries, fried okra, and mac 'n cheese. (To be honest, I considered doing that.) 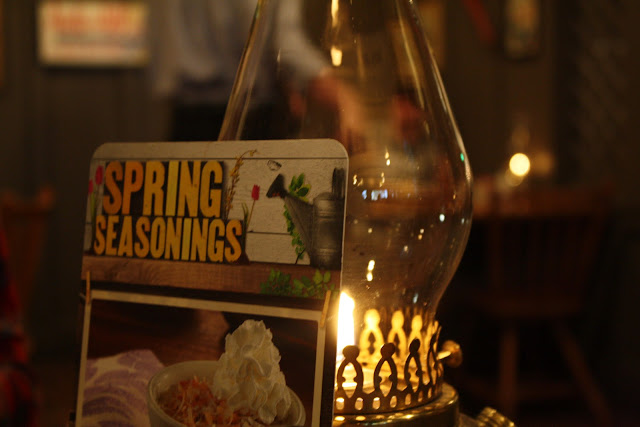 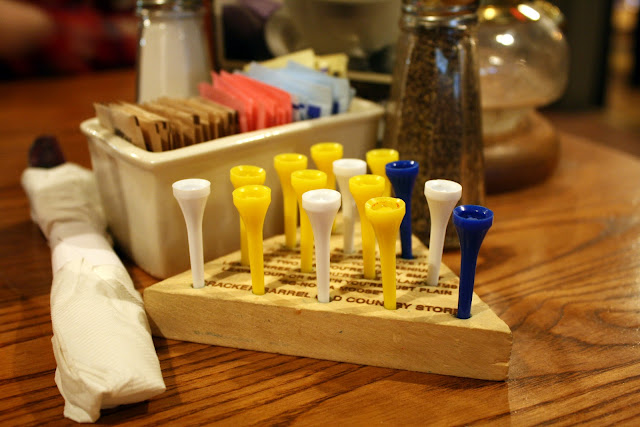 Just some of the kitsch that was on our table. 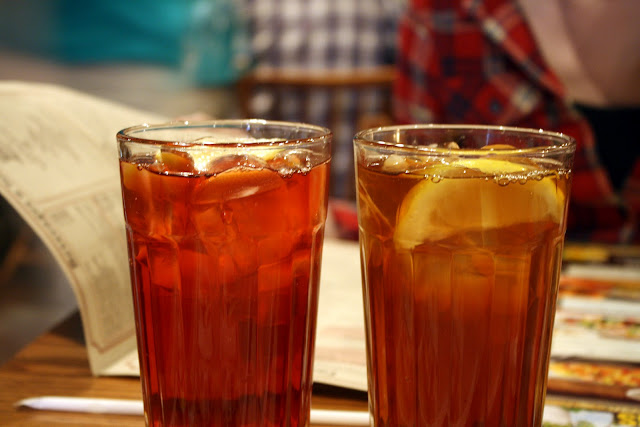 I had an unsweetened iced tea; Elizabeth had a raspberry tea. 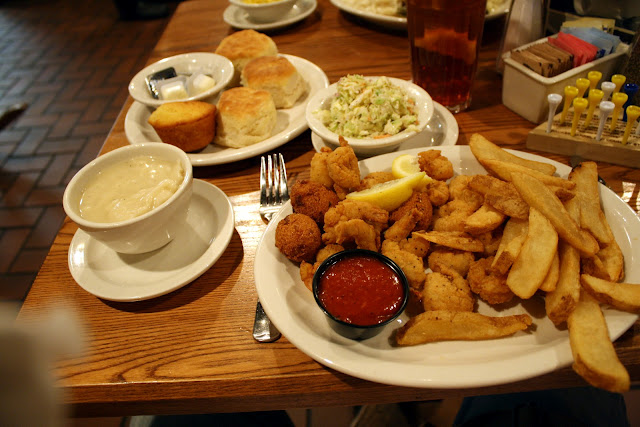 I had the fried shrimp plate, selecting as my three sides cole slaw, steak fries, and "dumplins." The cole slaw was really good, and the cocktail sauce, spiked with pepper, was outstanding. But I didn't care for anything else. The shrimp were undercooked, the breading separating from the shrimp as soon as I picked up each piece. The fries were room temperature and flabby. The dumplins had no flavor whatsoever. But there was a lot of food. 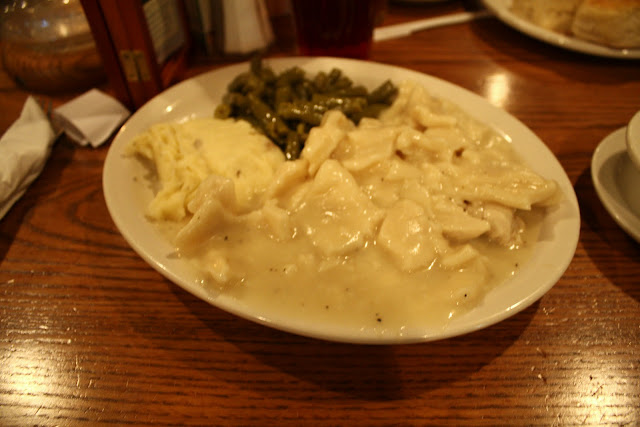 Elizabeth had the chicken n' dumplins with mashed potatoes and green beans. She liked her plate (I'm glad one of us did) but when she gave me a taste of the chicken I could not differentiate between it and the dumplins.

Our server was really nice and never let my iced tea get less than half full, the restaurant was clean and all this food - it could have served four people - was a little over twenty bucks. I can see why some people would feel comfortable here. But I just can't get past the fact that the food seemed as bland and uninteresting as any restaurant food I can ever remember having.

We would not eat at Cracker Barrel again on this trip.

Yep. Literally said "Oh my God" when seeing the amount of food you received. Daaaamn.

It's a fun game where you try to hop each tee over another until you have one left...most people leave usually 3 or 4...your pretty good if you can leave one

Those biscuits are amazing though

@Anon -- the golf tee thing is a type of solitaire game; you jump one tee at a time then remove it, and so on until you hopefully have only one tee left in the corner.

I've never had any desire to eat at Cracker Barrel, mostly because I don't really care for "comfort food" for the most part. I HAVE been tempted to go to the 'country store' part though; I hear they have some cool candy and things you can't easily get other places (like Sen-Sen, for example).

Anon: Maybe they're good when they're fresh, but these were not.

Mike: I totally get that. If I want comfort food I would like to make it myself, as a lot of the "comfort" comes from doing that.

We went to three fast food chains that will be coming up, but that wasn't one of them. I've been before, though, they're pretty good.