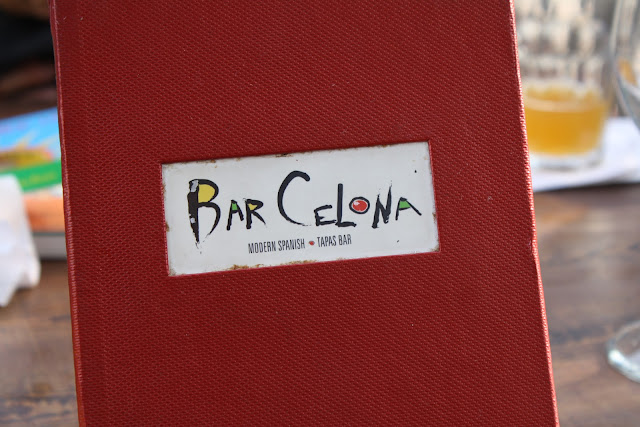 Several people asked me about having a going-away party, but I wasn't in the mood for such a thing. However, I did want to hang out with some people for a while before I left, so I suggested we get together at Bar Celona on Friday afternoon for a few drinks after the movers came by. The back patio of Bar Celona - in the alley, away from the traffic of Colorado Blvd -  has been a favorite spot for me and my friends to hang out for more than half a decade now. Several of my friends stopped by and after a round or two of drinks we picked over the happy hour menu for some snacks. (All of Bar Celona's happy hour items are five bucks between 4-7.) 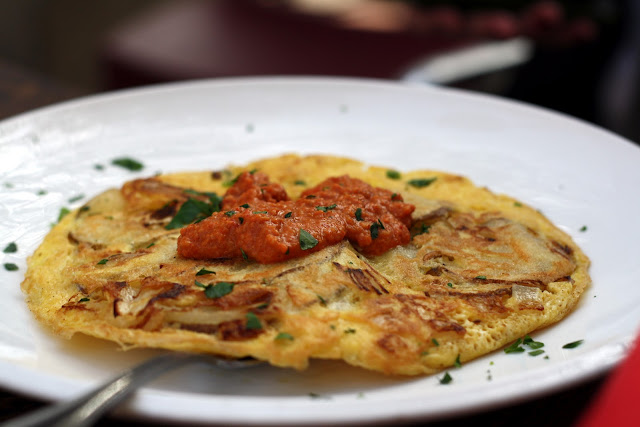 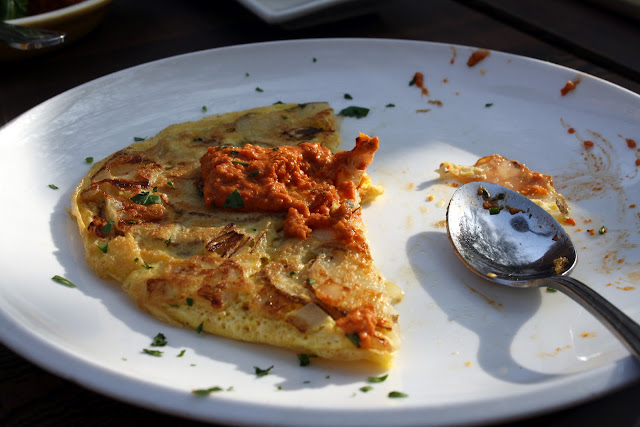 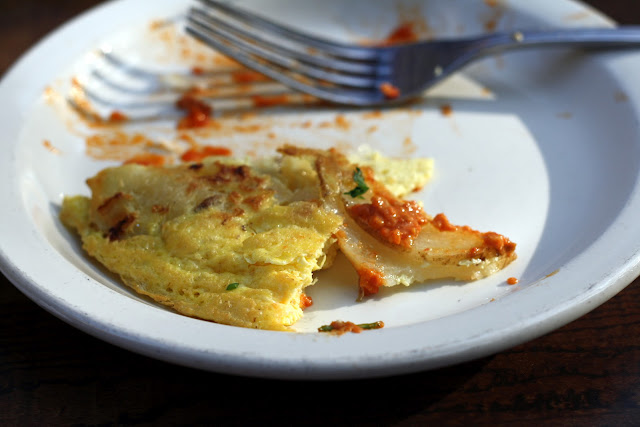 Amy went inside to order some food and she ordered a lot of it. We started with the tortilla española - as the name indicates, a Spanish omelet with onions and peppers and a mild romesco sauce. Although I would have liked some extra spice to it, I certainly liked the dish. 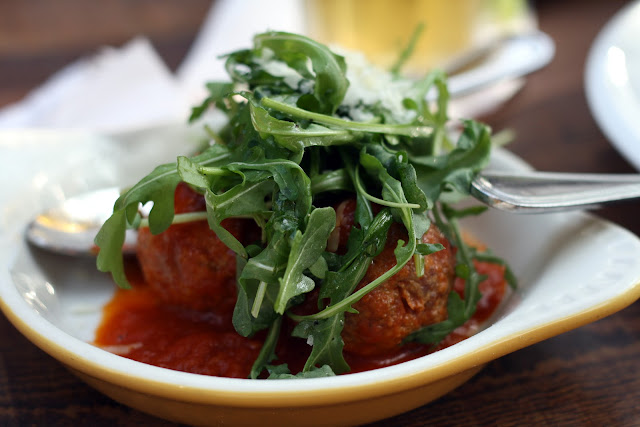 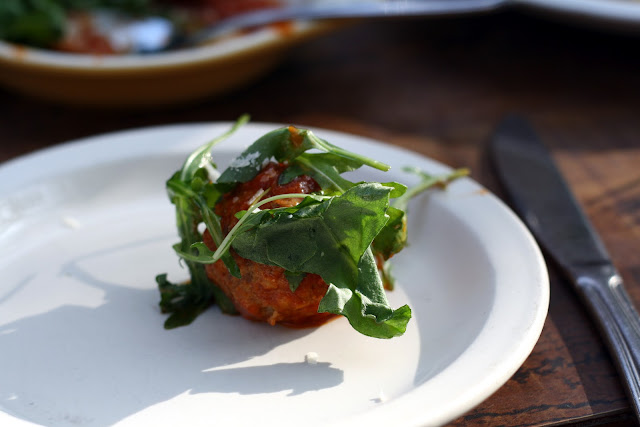 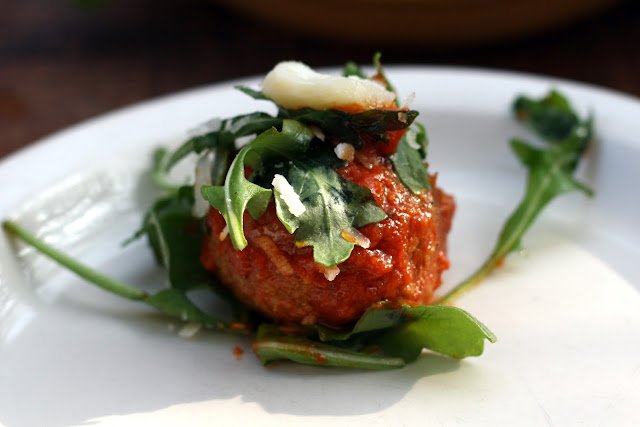 Albondigas: meatballs with saffron and allspice, tossed with some cheese (perhaps manchego?) and arugula. These were delicious and I'm glad Amy placed more than one order. They went perfectly with my Dos Equis beers. 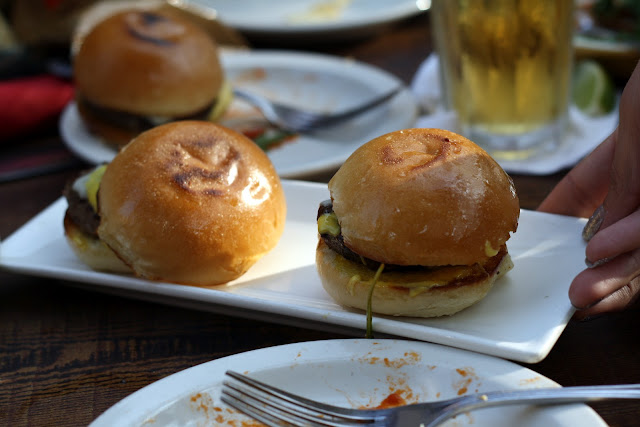 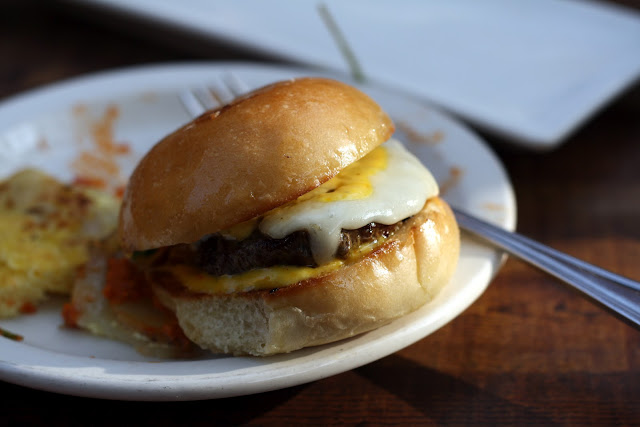 The sliders were fine: not bad by any means, but there was absolutely nothing special about them. (They would have been better if served on a softer bun.) Still, I ate at least one, probably two, and had no complaints. 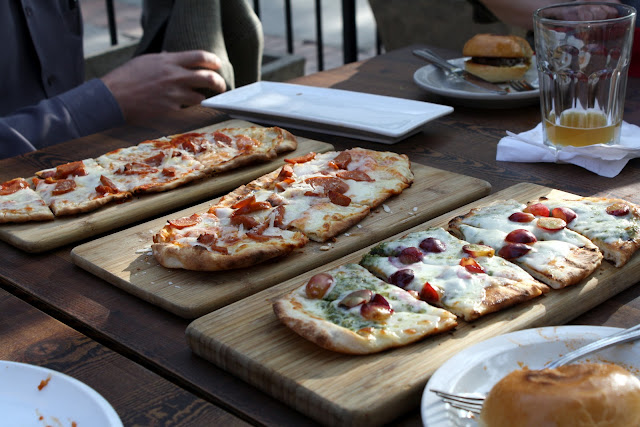 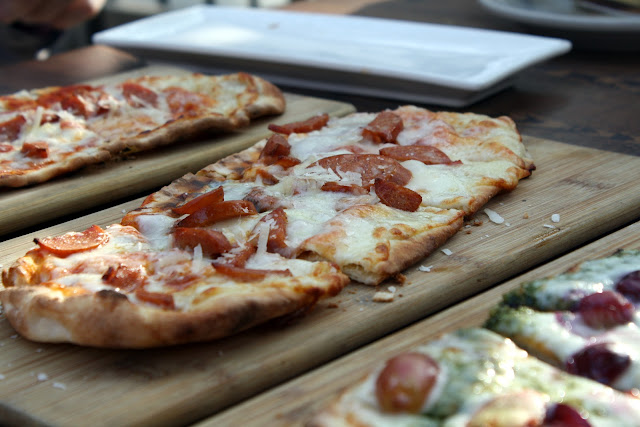 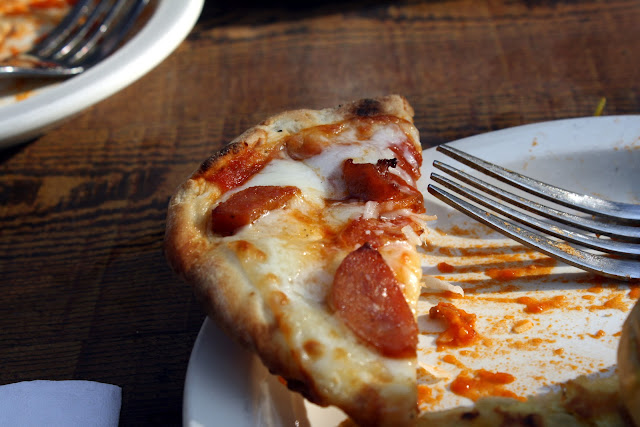 My favorite was the Spanish sausage flatbread, with chorizo. I've had this several times and it always hits the spot. 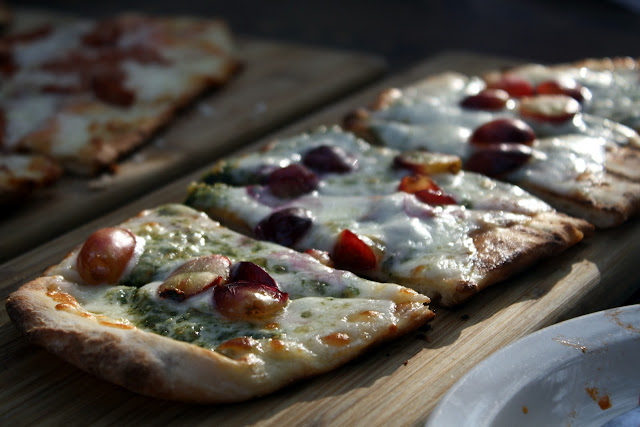 This flatbread looked strange - I have no idea what was on it - and I did not have any, but other people seemed to enjoy it. 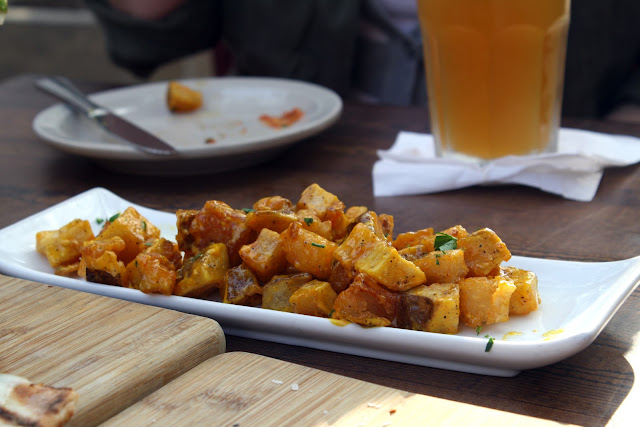 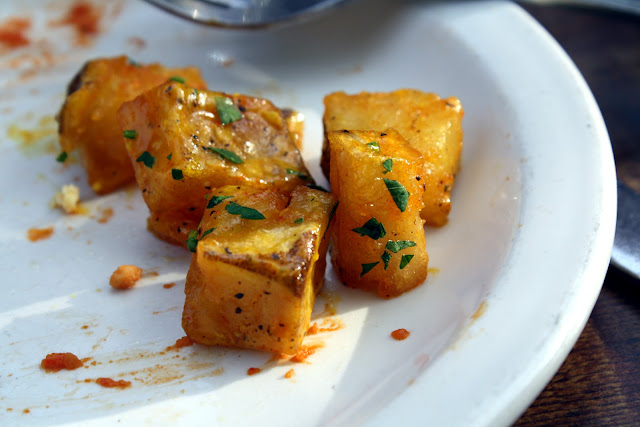 I have had the patatas bravas at Bar Celona dozens of times over the years. These were by far the best I've ever had. (Other people agreed with me.) 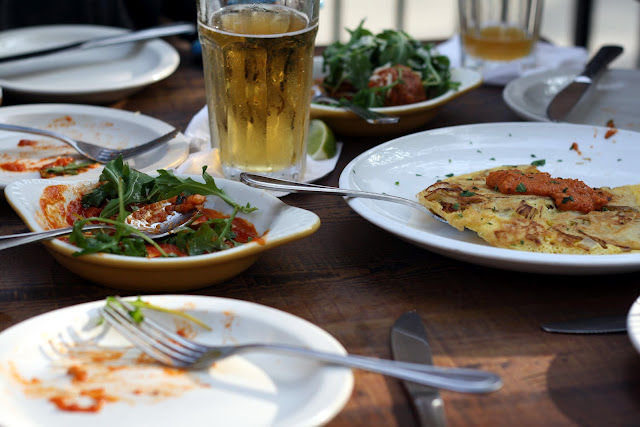 We slowed down a little after shovelling in all that food. Some people took off, others showed up, some who had left even returned. There would be more food later on. 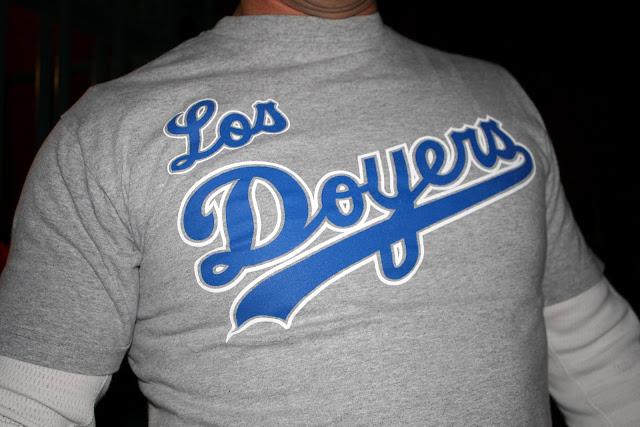 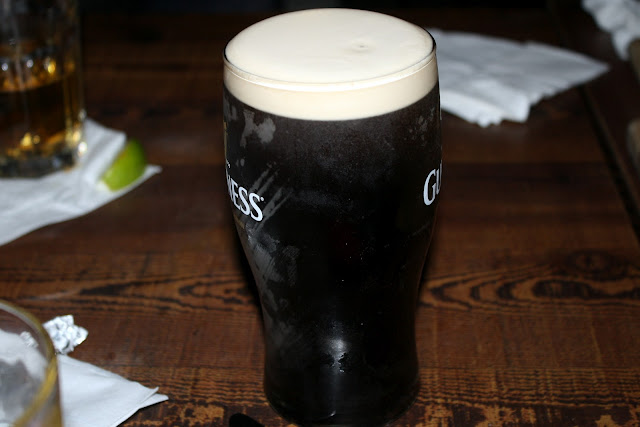 I won't say who this person is, but let's just say his name has appeared here many times over the years. He was hanging out down at Lucky Baldwin's (as I mentioned when I wrote about the place a couple of weeks ago, there were years when I was there almost every day) so he brought me a Guinness - almost always my beer of choice back in the day - over to Bar Celona.

Later in the evening (well after happy hour was over) we were hungry again so we picked up the menus and placed more orders. 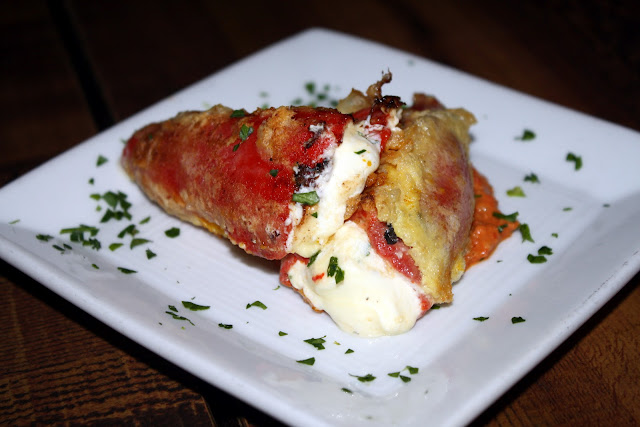 Elizabeth ordered the piquillo peppers stuffed with goat cheese and served with romesco sauce. These were outstanding. We could have eaten three orders of them. 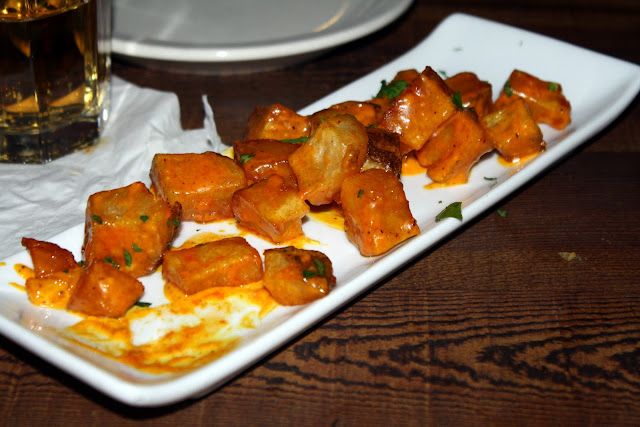 Of course there was another round of those patatas bravas. 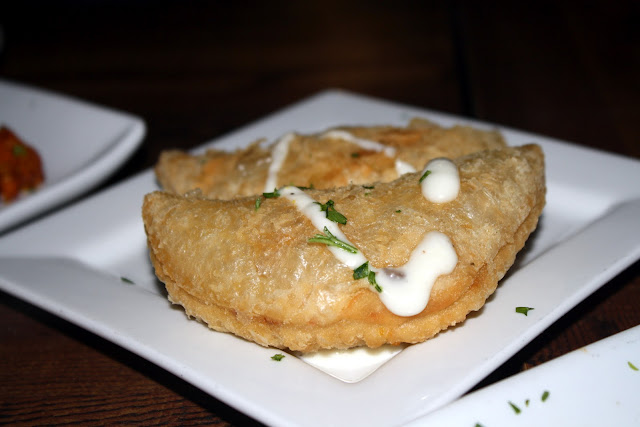 I've never been a fan of the empanadas at Bar Celona. I feel they are always overcooked dough with a flavorless interior. So I didn't try any of these. But other people enjoyed them. 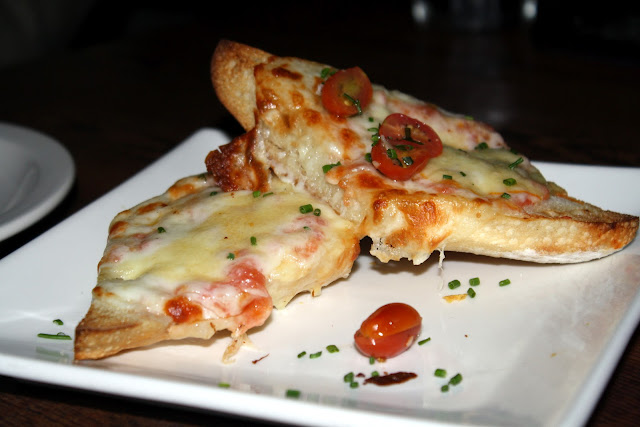 Grilled bread with cheese, fresh garlic and tomatoes. Fantastic. Well, once I took off them tomato. 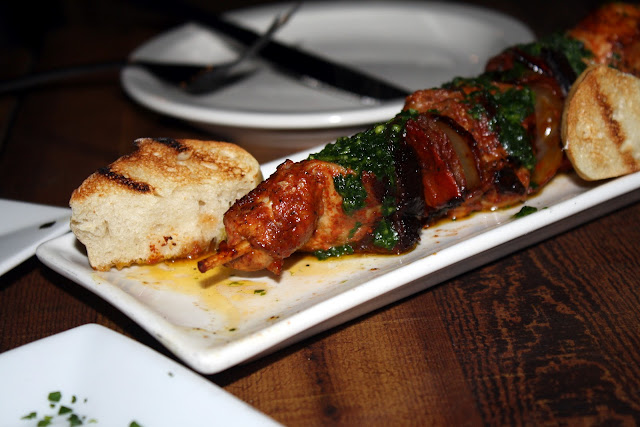 Dave got a skewer of chicken with grilled bread and chimichurri sauce. I'd never tried this before but took a tiny taste and really enjoyed it.

I stayed out much later than I had planned (Bryce and I could not remember how many years it had been - probably 6 or 7 - since we'd had a beer together after midnight) but it was worth it to hang out with everyone. And the food was certainly better than what I had the next night on the road. But more on that tomorrow.
Posted by JustinM at 9:00 AM

Is that the legendary Murph?!!!

Good guess, but no. This gentleman's (and I use that term loosely) name has not appeared as much as Murph's over the years. Murph is like a brother to me, but I don't see any circumstance in which he would buy me a beer at one bar then walk it down the street to another bar. He would probably stop to buy a boba tea or browse at Sunglass Hut and leave the beer on the counter.

I think 6 or 7 years is overstating it a wee bit, it hasn't been that long!

Do you remember something I don't? The last time I remember being out after midnight with Bryce was Dave's bachelor party in 2006. But I admit I may not be remembering something.

I agree with the loose reference... I'd like to think I fall somewhere between gentleman and rapscallion. Glad you all made the journey safely

Indeed you do and that's why I like you. I'd rather laugh with the sinners than cry with the saints, the sinners are much more fun.

I rarely stayed out past 11pm even when I was a regular, so I think that timeframe is about right. Toni once said, "Bryce! You're out...past midnight! Be careful...you may turn back into a pumpkin."

I may be merging many drunken post-midnights into one episode. That wouldn't be surprising at all.

Awww...come on, can't you tell us who the mystery giver of beer is? I mean it's not like we'll see him in your posts now that you're on EST, right? And we can't see his face! Just sayin'

But then he will get a spanking for bringing me beer from another bar!

But if you REALLY want to know you can email me since you've been a reader for a long time.