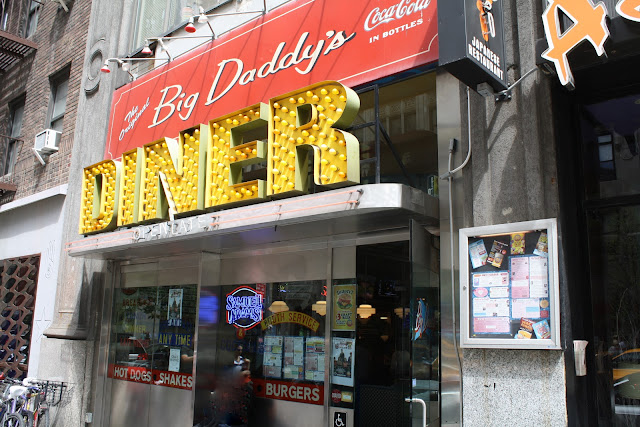 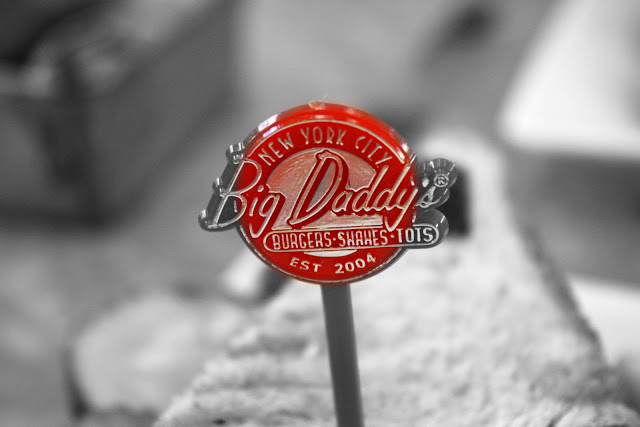 I had accompanied Elizabeth to Union Square to visit a couple of stores she wanted to go to, and after a while I got hungry. Really hungry. We went into a place that looked good, but there was a several-minute wait. Not for a table - to put our name in to wait for a table. No joke; the line to give the hostess our name was stretching out the door. So we went walking. But nothing caught my eye.

She took out her phone, looked up an address, and we started walking in that direction. I did not know what she was planning. When we got to Big Daddy's, she revealed that she had eaten there once years ago and it was great, and they had perhaps the best tater tots she had ever tried. (That really didn't mean much to me; I am not a big tater tot fan. I mean, they're still fried pieces of potato, so I'll eat them, but I much prefer fries.) 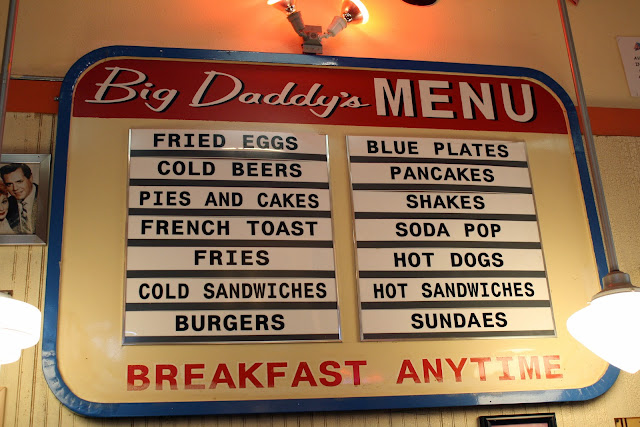 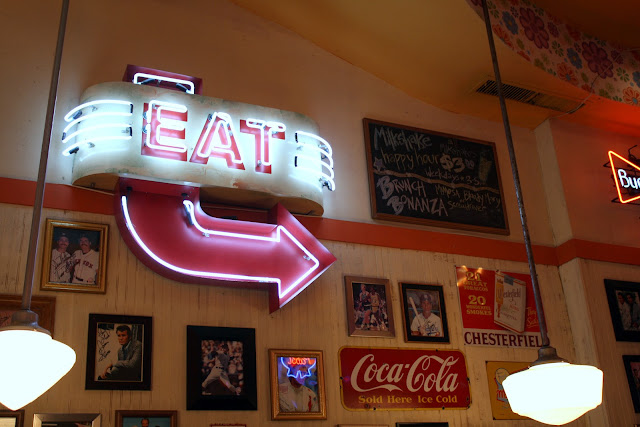 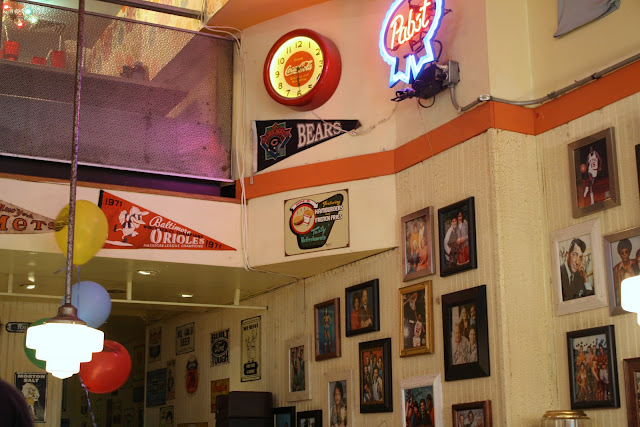 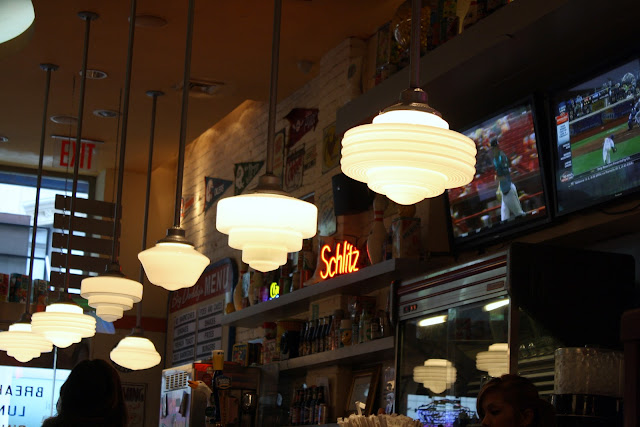 I liked the way it looked inside. By this point it was mid-afternoon, but the place was still quite busy. 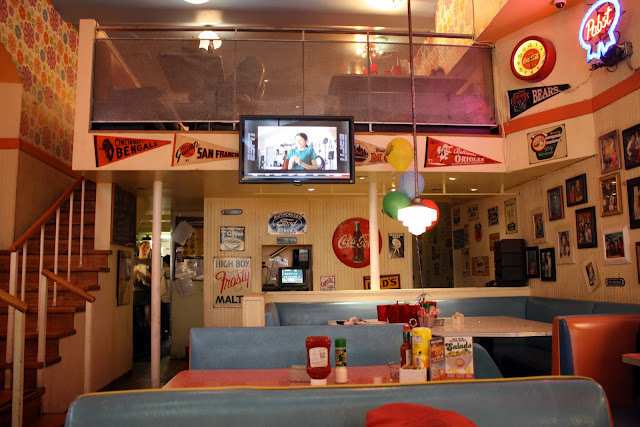 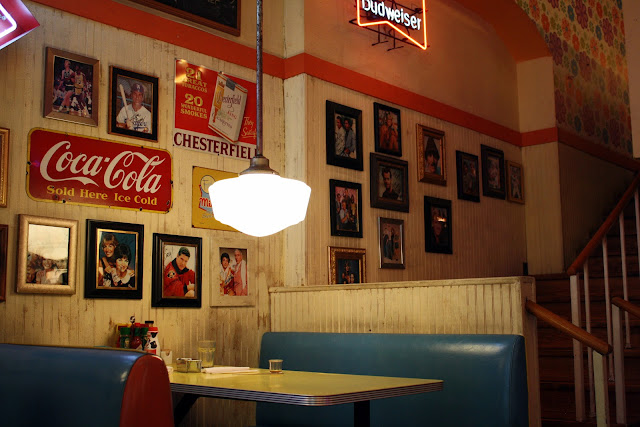 (Although by the time we were done eating, almost everyone had cleared out, so I got to take some unobstructed photos.) 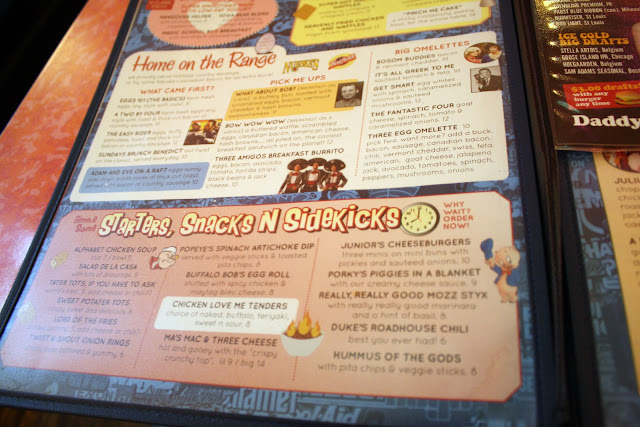 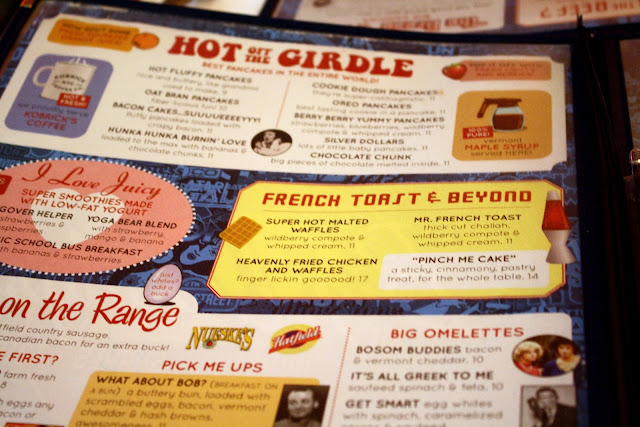 I knew what to expect from the menu the minute I walked into the place: a silly menu with pop-culture-referencing names, bright colors, and at least one or two items proclaiming themselves the "world's best." I was correct. 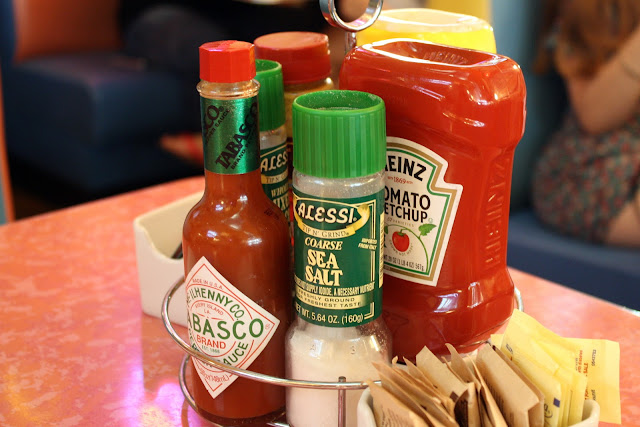 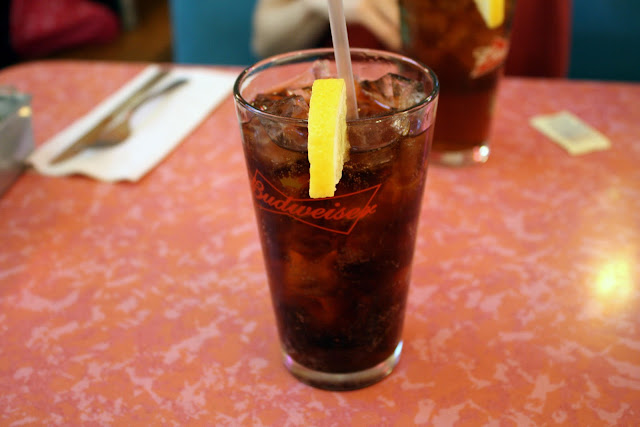 Elizabeth had an iced tea and I had a Diet Coke. 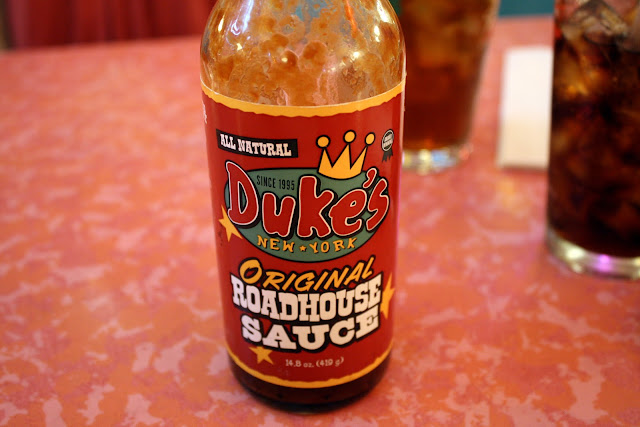 This bottle was on the table; I couldn't wait for the food to arrive so that I could try the sauce. As it turned out, I did not like it at all - it was much too sweet. I can count on one hand the number of sweeter barbecue sauces I have ever tried. That's too bad, because I think the bottle is really cool. 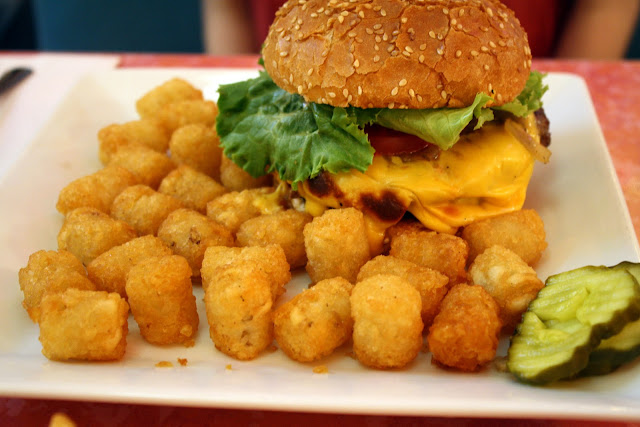 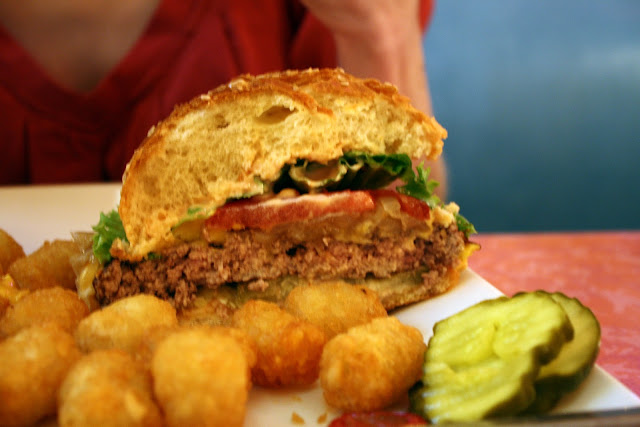 Elizabeth had the burger and she loved it. She couldn't finish it so she gave me a bite. It was a better-than-average diner burger, no doubt about that, but I can't really be any more effusive. You won't go wrong ordering this, but don't go out of your way for it. The pickles were really good, however.

The tater tots were pretty good. Coming from me, that's high praise. They aren't the best I've ever had - not even the best I've had in New York City; I actually had tater tots over the summer that were the best I have ever had in my life, one day I promise I will write about that place after I return for a second meal - but I enjoyed them, which is not something I can usually say for tots. 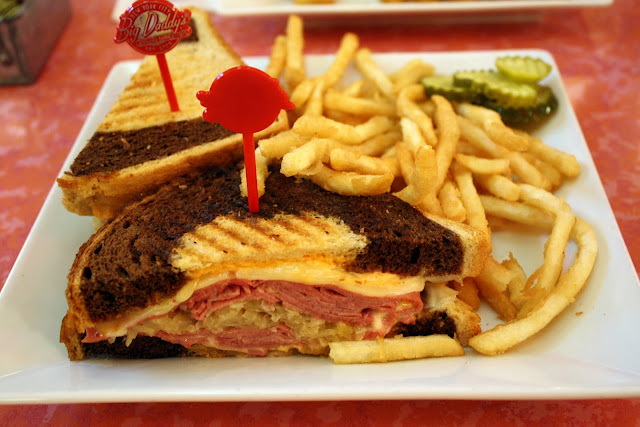 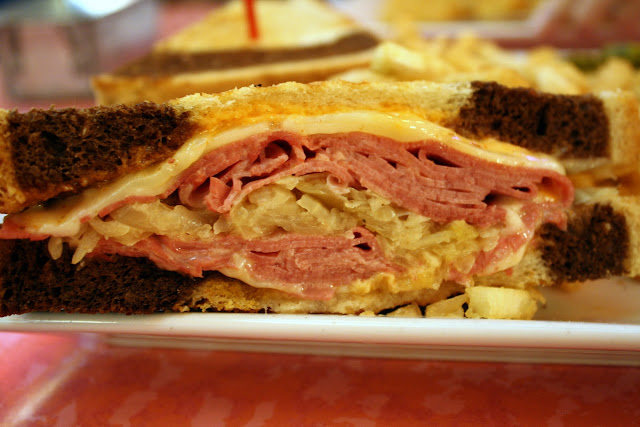 I got the Reuben Kincaid. (I recognized the name but had no idea where it was from: The Partridge Family. That show ended several years before I was born; I watched a repeat once when I was a kid and did not care for it at all.) Corned beef, sauerkraut, Swiss cheese and Russian dressing. It was good. Sure, there were probably 50 Reuben sandwiches within a one-mile radius that day that would all have tasted better, but this is where we ended up and this is what I got.

It was a fun meal at Big Daddy's. I don't love diners like Elizabeth does but I admit a fondness for retro-style joints, probably because they remind me of childhood Sunday afternoons at the long-gone Rose City Diner in Pasadena. I would have no problem returning to Big Daddy's if the situation came up. But honestly, I have no idea what that situation might be, and I certainly am not going to ever make an effort to return.
Posted by JustinM at 10:00 AM

Nice swirly bread on the Reuben.

need to know where the better tater tots are. LOVE tator tots! PS, went to a salt and battery last night...you might love it!

i woulda got the reuben plain with just a tad of the dressing as i like stuff plain. like your dad, pp!

Mindful: It's the simple things that make you happy, no?

Fritos: Here's a hint: you were with me.

Anon: Yeah, I don't seen any scenario in which my dad would put Russian dressing on beef.

So many diners, so little time.