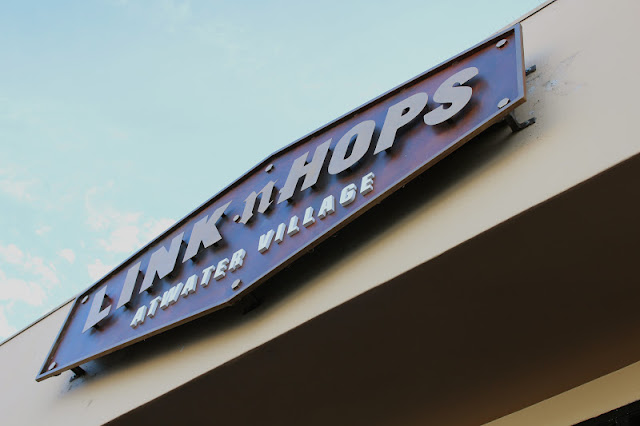 When my friend Carla learned a few weeks ago that I would be back in town, she asked if we could go to lunch one day. I said of course. She sent me a link to a place that opened recently in Atwater Village: Link N Hops, specializing in sausage and beer, as the name implies. Not only do I love those two things, the menu also promises triple-fried Belgian fries. 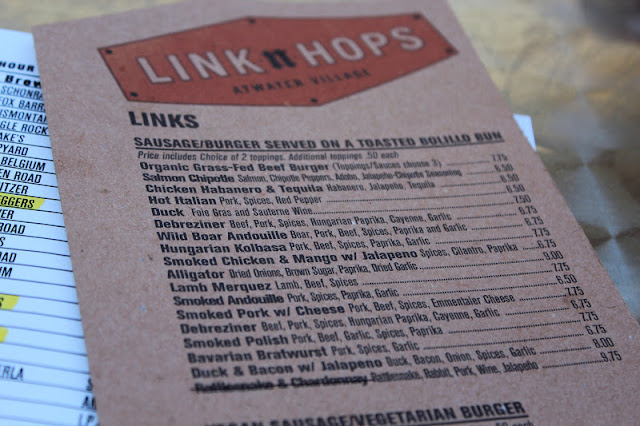 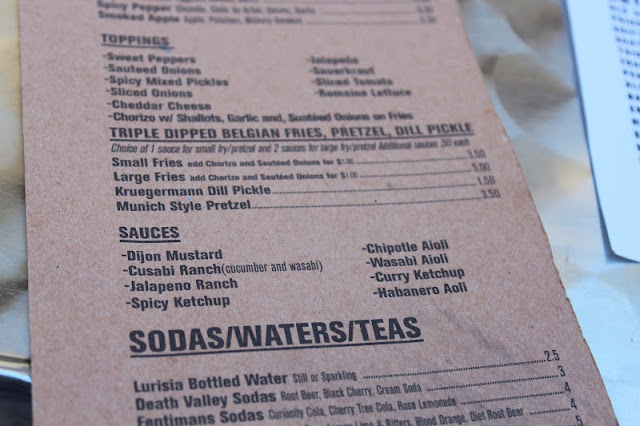 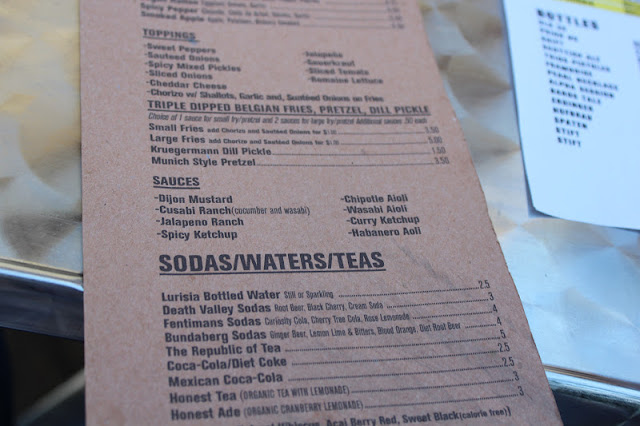 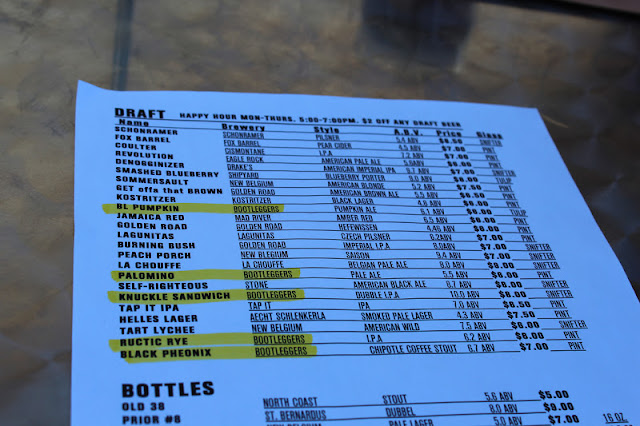 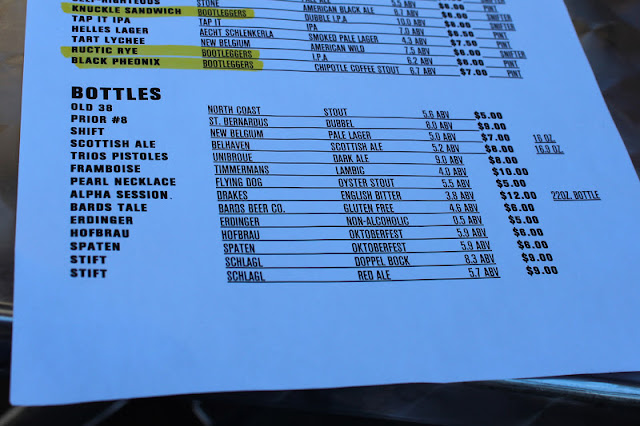 It's impossible not think of Wurstkuche when looking at the menu. But the guy behind the counter was very friendly, nobody bumped into me because they were wearing their sunglasses indoors, and the meal cost less than twenty dollars per person. So I like it much more than Wurstkuche. 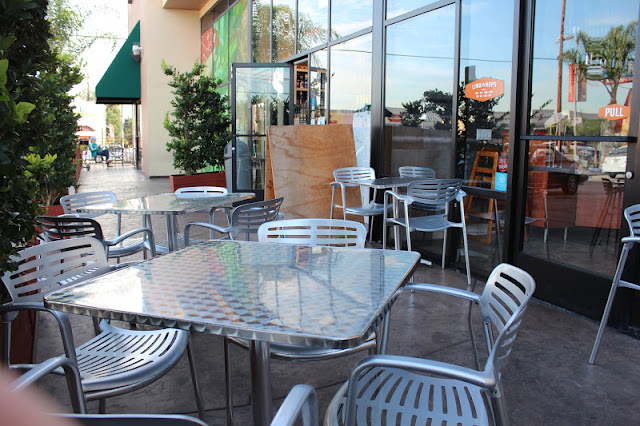 It was a nice day - much nicer than the days I just left in New York - so we sat outside. 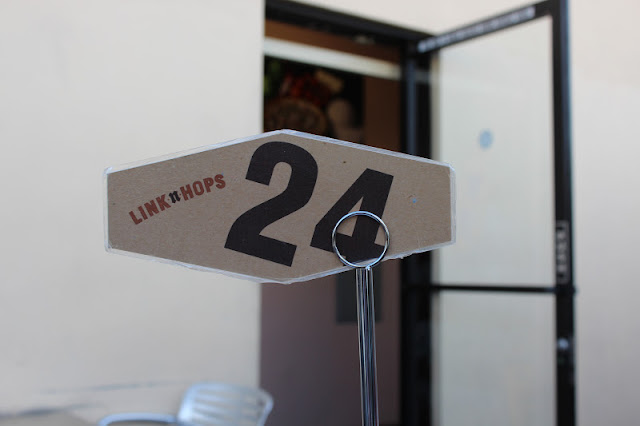 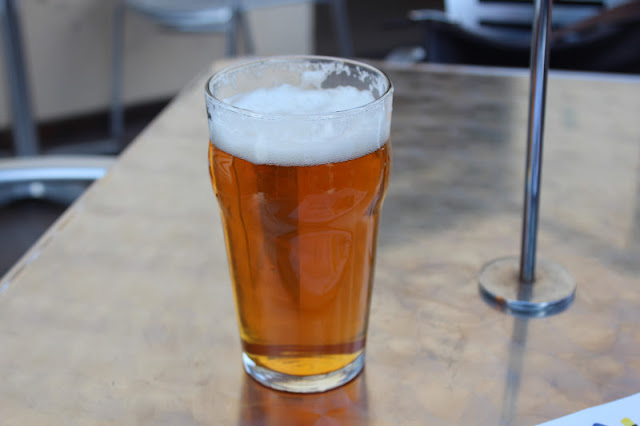 I had a Lagunitas pilsner. 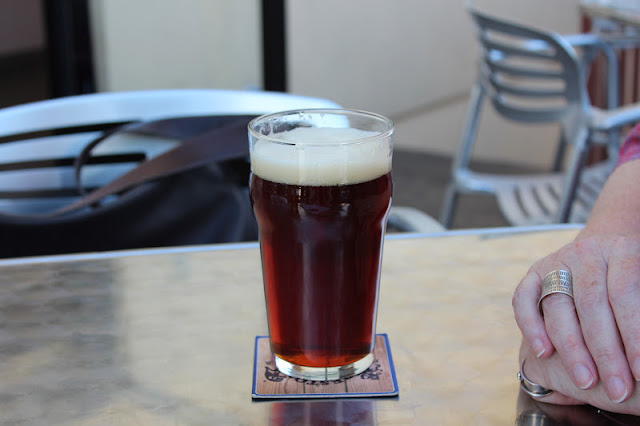 Carla had the Jamaica Red. 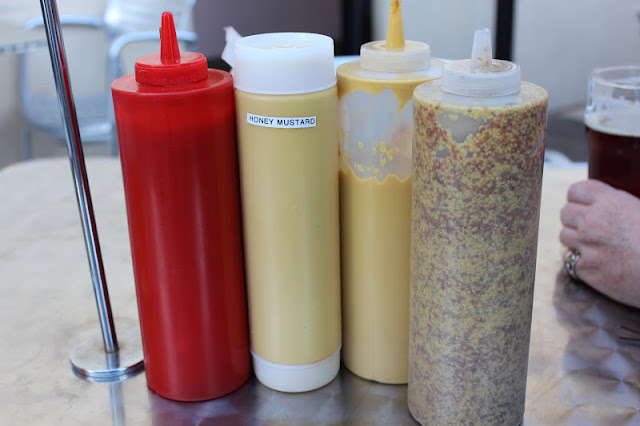 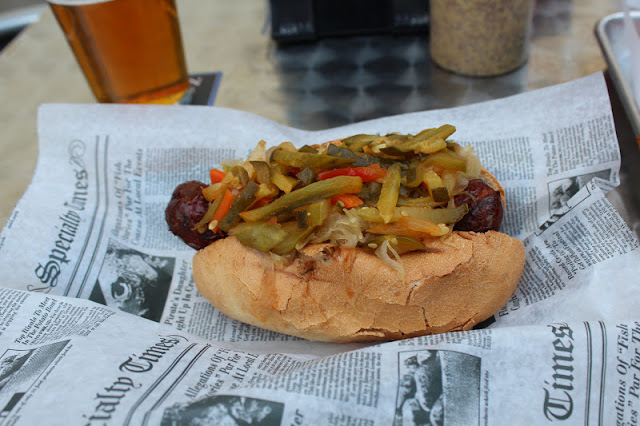 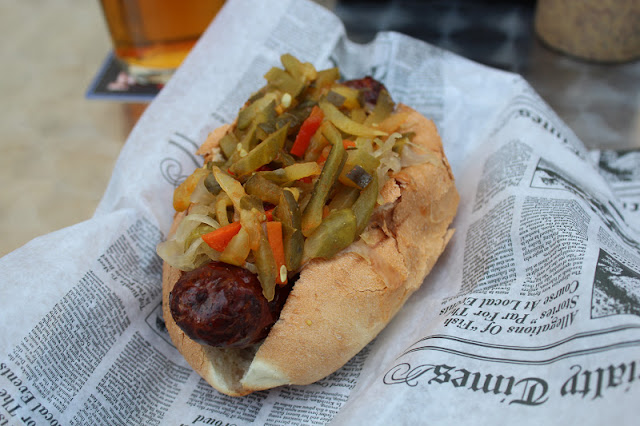 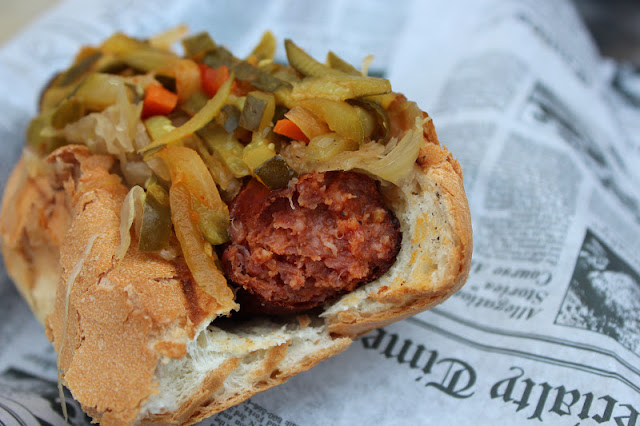 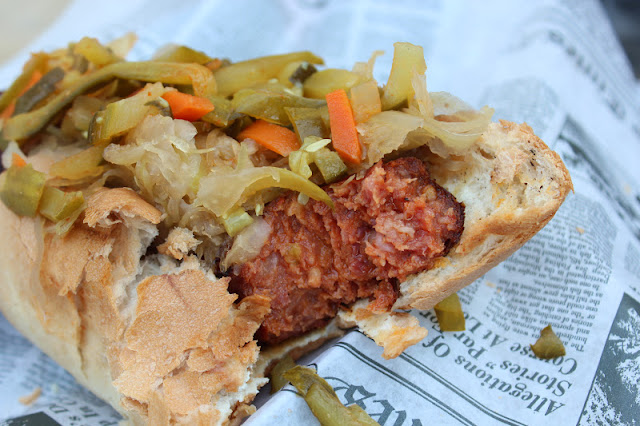 I selected the wild boar andouille sausage, with sauerkraut and spicy mixed pickles. I loved it. First, the choice of toasted bolillo rolls was a good one: toasted just enough to firm up slightly and hold together the sausage and toppings, but not too hard to interfere with the taste of the meat.

The sausage itself had a nice flavor, and I loved the spicy pickles. 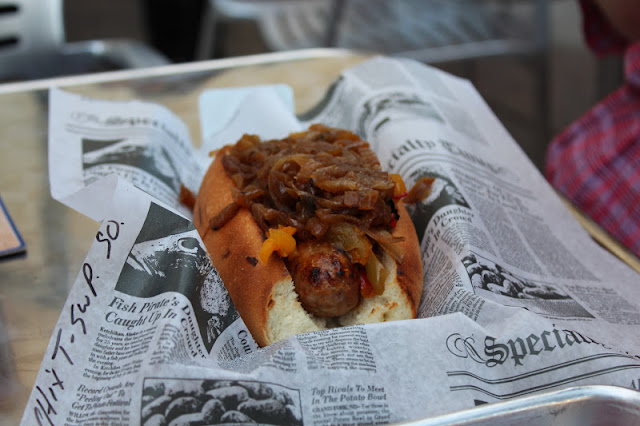 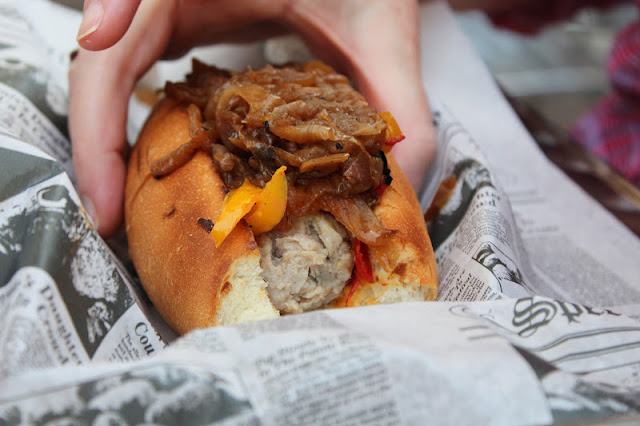 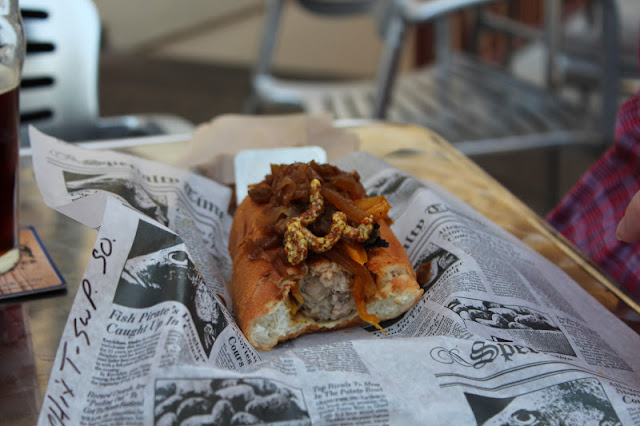 Carla had the chicken habanero and tequila sausage, with sauteed onions and sweet peppers. She also loved her sausage. She offered me a bite but I declined. 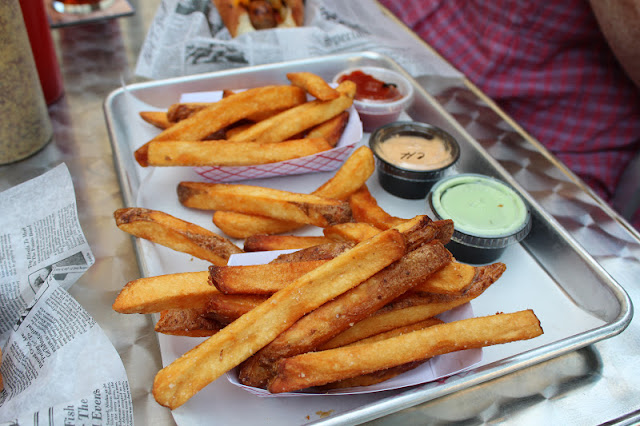 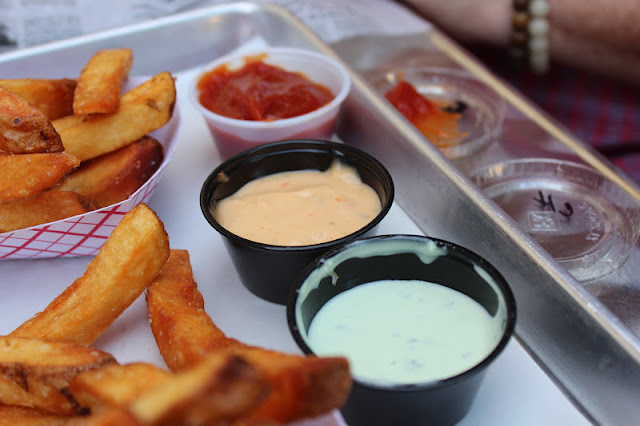 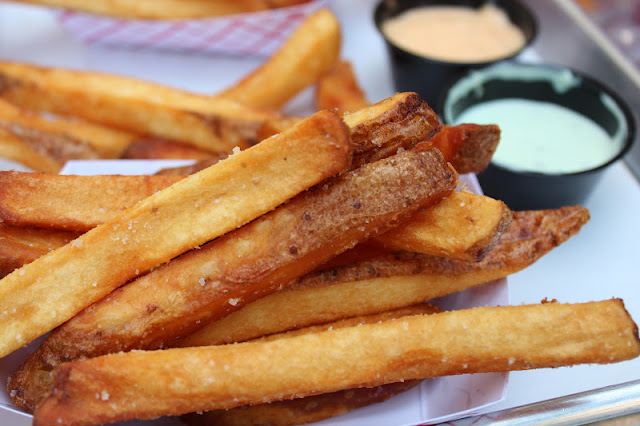 The fries were fantastic. The first time I ever ate at Wurstkuche, my fries were the best I have ever had in California. (The second and third times I ate there, the fries were terrible: floppy, greasy, undercooked potatoes that were thrown carelessly onto my tray.) That is what these fries resembled. Crispy outside, perfectly soft inside.

For our sauces, I ordered chipotle aioli and curry ketchup. Both were good. Carla said she wanted to try the "Cusabi Ranch." As you can guess, it's a mix of cucumber and wasabi. It turned out I liked that sauce more than the two that I had selected. 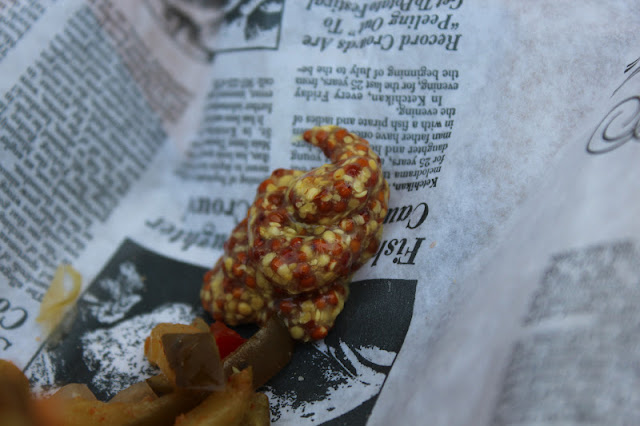 I wanted to try the whole grain mustard so I squeezed some into my basket. It looked like a snake, which I thought was cool.

This was a weekday in the mid-afternoon, so there were not many people there. I imagine it's less fun when it's crowded. I doubt I'll be back - there are far too many places at which I want to eat over this vacation - but I really liked this lunch at Link N Hops.

I gotta say, I'm loving your trip photos, though I'm finding myself incredibly homesick in the process. Keep it coming.

And that's before you see what the weather is like today.

Okay, that can be arranged. Probably Monday.

I would have gone with the wild boar sausage as well. Good choice! The fries look amazetown, so it's all about triple fry these days, huh? Glad to see Atwater is on the up and up - looking forward to more So Cal posts!

That menu makes me want to track down and try the Pearl Necklace Oyster Stout. Intriguing.