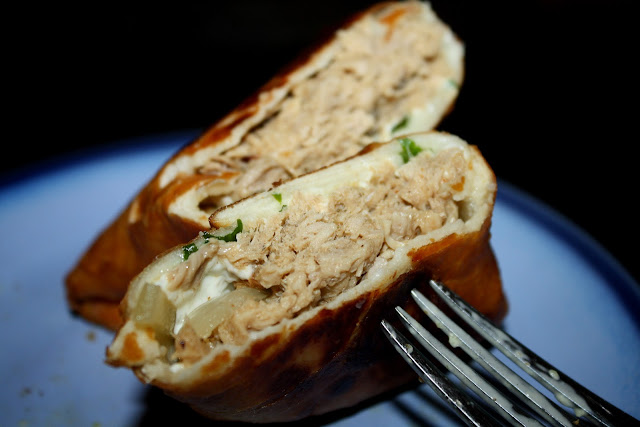 "What a way to spend an autumn afternoon" - Chris Schenkel, ABC Sports

Baseball is my favorite sport, and I was always much better at basketball than playing anything else, but when it comes down to it, there is nothing I enjoy more than the spectacle of college football on a glorious November afternoon. The uniforms, the sound of a band striking up after a touchdown, the mascots, the tailgating, the rituals. Where else do you see a 1400-pound buffalo running around the field (like Colorado) or folks sailing to a tailgate party (like Tennessee)?

It's why, almost every Saturday in the fall, I am parked on the couch in front of the TV. It's also why I try to create really good food every Saturday: to add to the the festiveness. Hence all the Football Eats.

But even by usual standards, Saturday's games were special. The two marquee games were USC vs. Oregon at the Coliseum, and Alabama vs. LSU in Death Valley. (College football locations have great names, too: Death Valley, The Big House, The Horseshoe, The Swamp.) Throw in Pitt-Notre Dame (earlier in the week I had predicted a Pitt upset to an Irish-loving friend of mine; missed it by that much), Texas-Texas Tech, Oklahoma State-Kansas State and UCLA-Arizona, and it was a full afternoon and evening of games.

I wanted to make something really good to eat.

Behold the chimichanga: a tortilla crammed full of whatever you desire, folded into a packet and fried crisp.  This is not health food. Sometimes it's not even good food; Lord knows I have had my share of cheap cheese chimichangas that made my belly ache within minutes. But when made with effort... there are very few things that will ever taste better.

This is what I did: 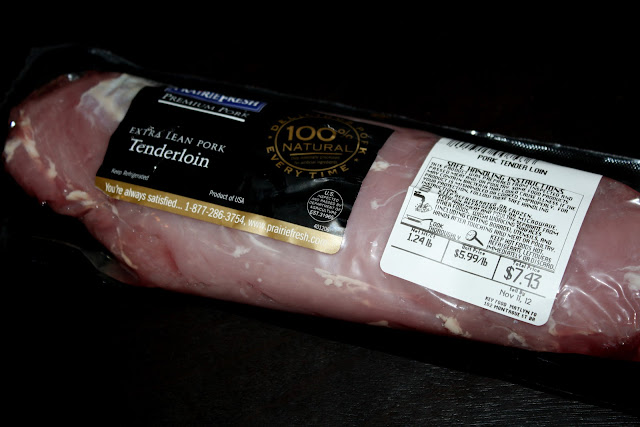 A small pork tenderloin to start. I was hoping for something closer to two pounds, and I sure as hell didn't want something labeled "extra lean"... but what are you gonna do? This is all the store had. Between scotch and nothing, I'll take scotch. (Pickings have been really slim at stores this past week, for the obvious reason.) 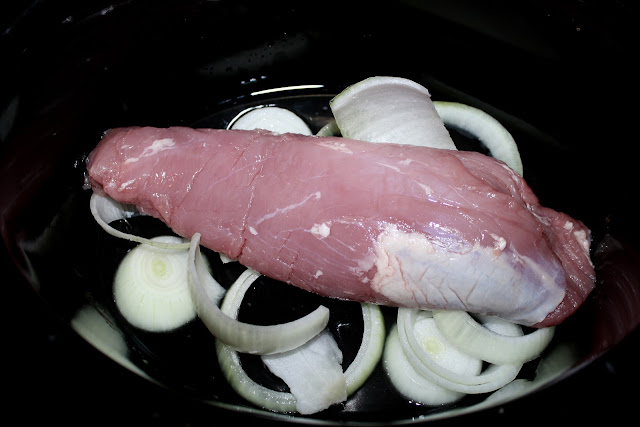 I placed this pork in the slow cooker on a few scattered onions and a cup of water. With the relatively small size and the lack of fat, I knew this could be overcooked, so I set it on low and made a note to check on it every hour after four hours had elapsed. 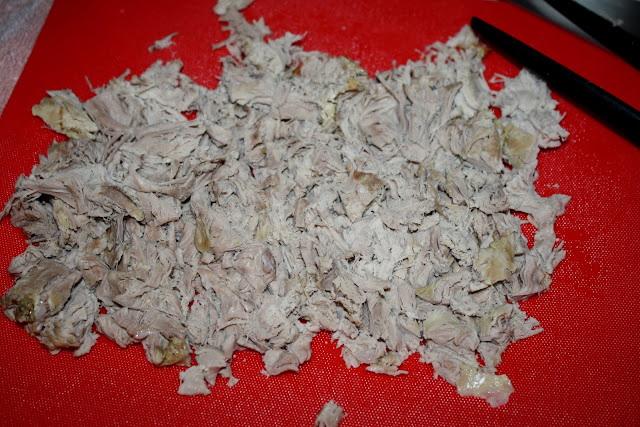 After five hours, I felt good about the porcine project and I removed it, chopping it up into pieces. But we're not done with the slow cooker just yet. 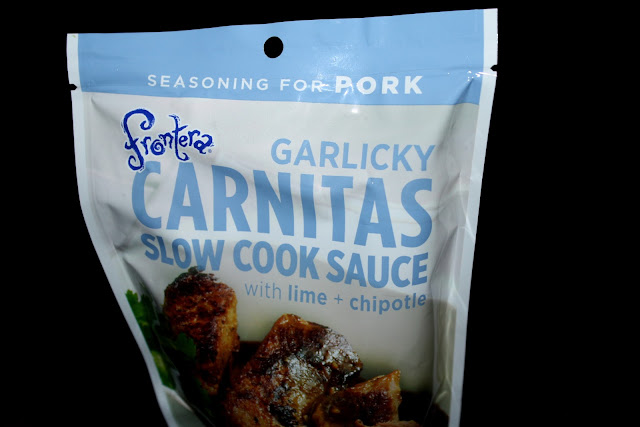 I've shown you Rick Bayless's seasoning sauces twice before: chipotle garlic tacos I made back in May, and red chile-cumin tacos in February. Both times I was pleased with the results, and adding some garlicky flavor to this pork sounded great. I poured the bag, and half of a large, sliced onion, into the slow cooker with the chopped pork and let it simmer for an hour. 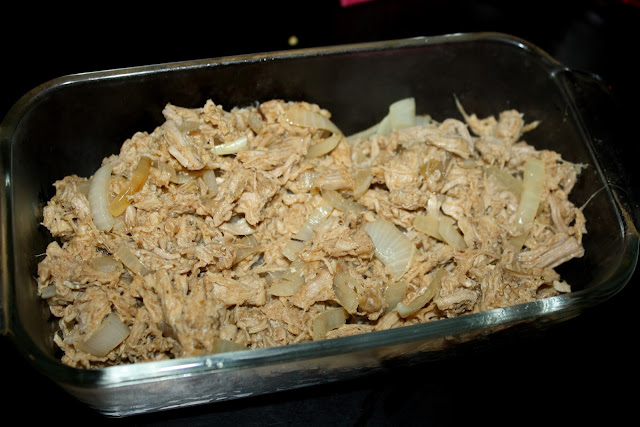 And then I removed it and put it into a dish, but not before taking a taste. Damn it was garlicky. And that is a compliment. 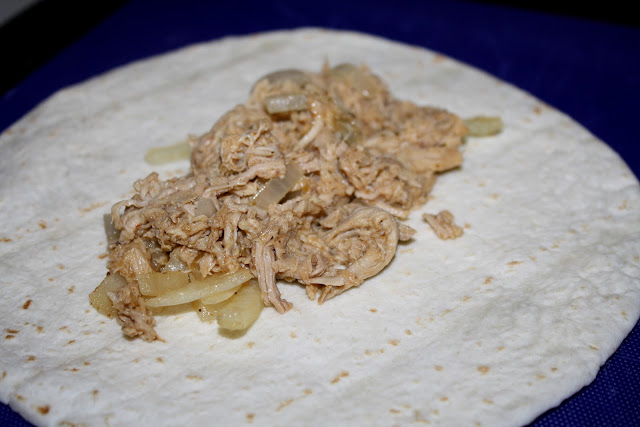 I wanted smaller tortillas than the eight-inch variety, but the store doesn't have the greatest selection of tortillas I've ever seen, and at any rate there were almost none left. (Remember what I said about the shelves being pretty empty this week.) So I had to make the chimichangas slightly larger than I wanted to. No big deal. I spooned some of the garlicky pork mix into each tortilla. 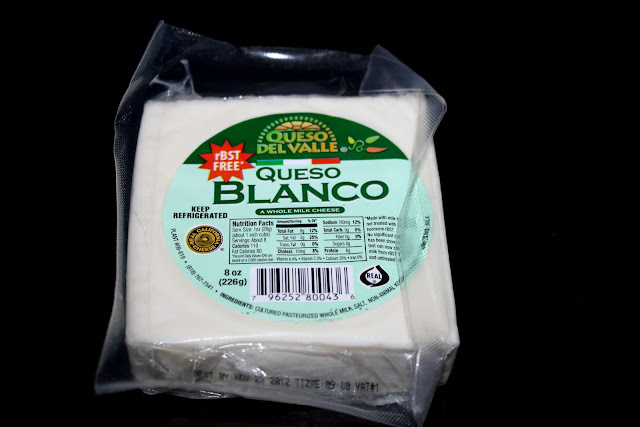 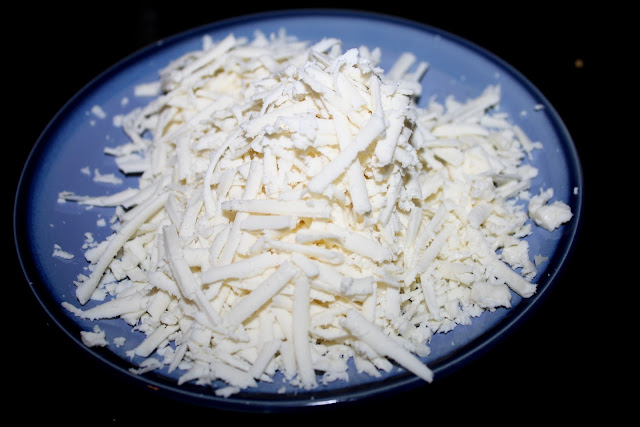 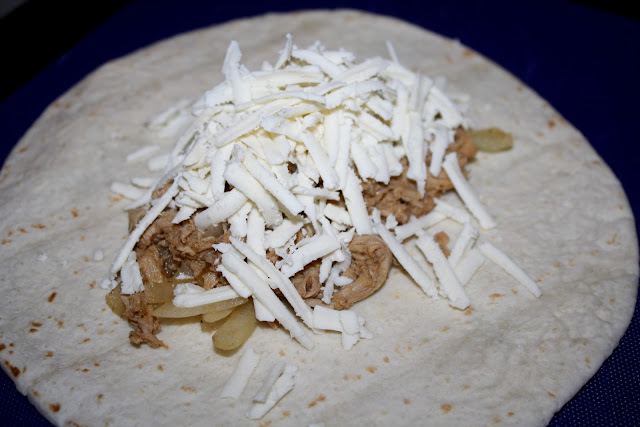 Queso Blanco is the perfect cheese to melt into a creamy, gooey, and oh-so-tasty blend inside a quesadilla, burrito or chimichanga. So that's what I used. 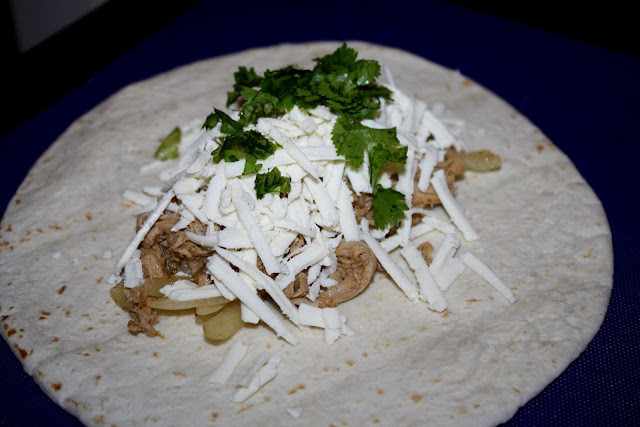 And a little cilantro, too. 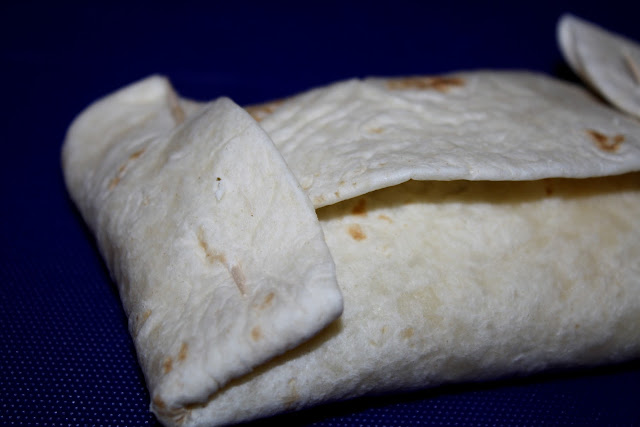 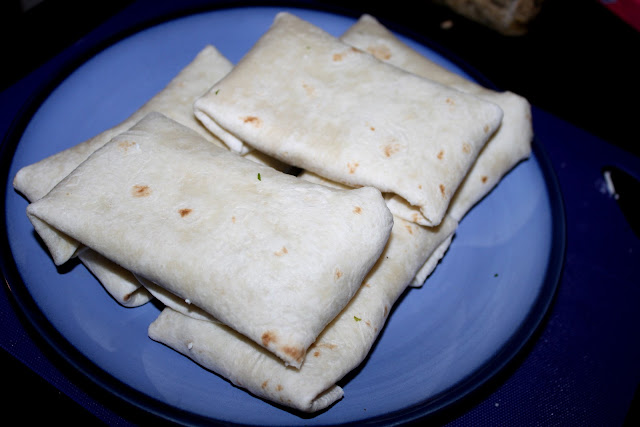 I used toothpicks to secure the ends and stacked them up, ready for frying. 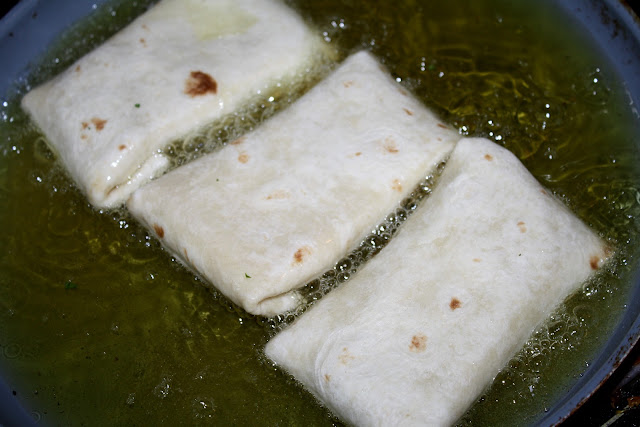 About two minutes on each side in the hot oil.

While they're frying, I'll show you the sauce I made. 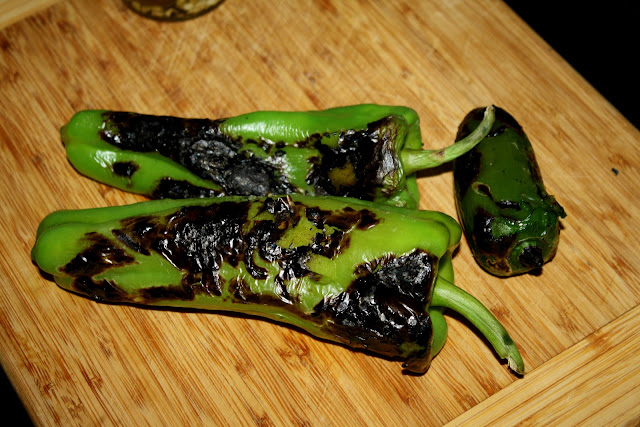 I roasted two large mild peppers and one jalapeno on top of a burner. You can char them as much as you like; sometimes I get the skins completely black. But this is all I did this time. 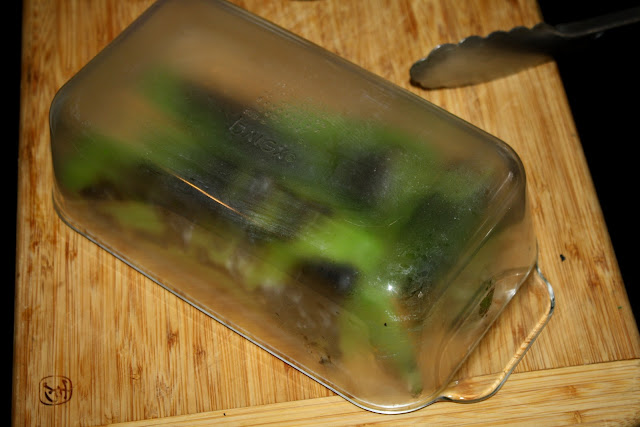 I then covered them with a dish - actually, the same dish into which I would later put the pork - so that the skins would loosen and the peppers would soften. 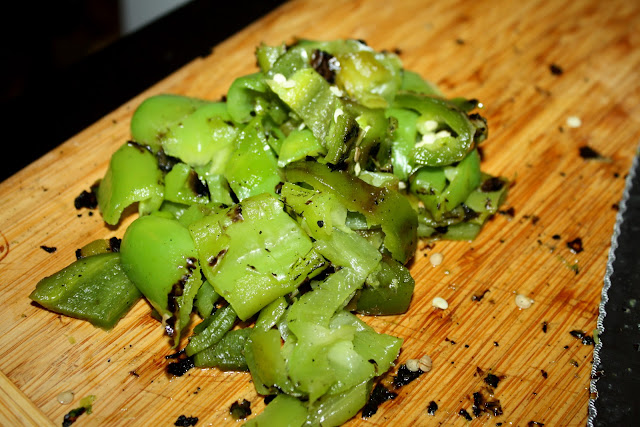 Then I scraped off most of the black and chopped them up. If you can't remove all the black spots or the seeds, don't worry. You won't taste either and it gives a cool-looking appearance to the sauce. 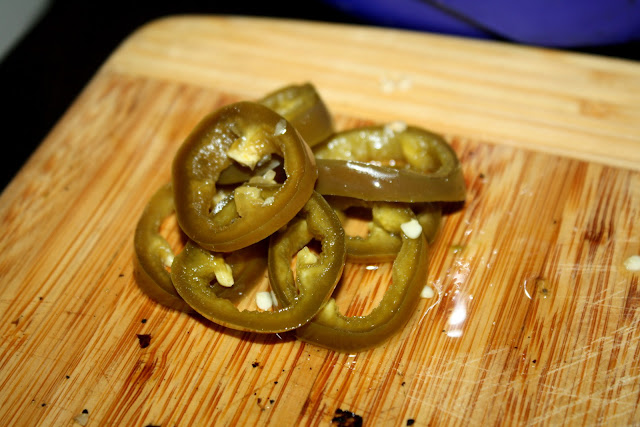 I usually keep a few pickled jalapenos in a jar in the fridge, so I decided to use some of them, too. 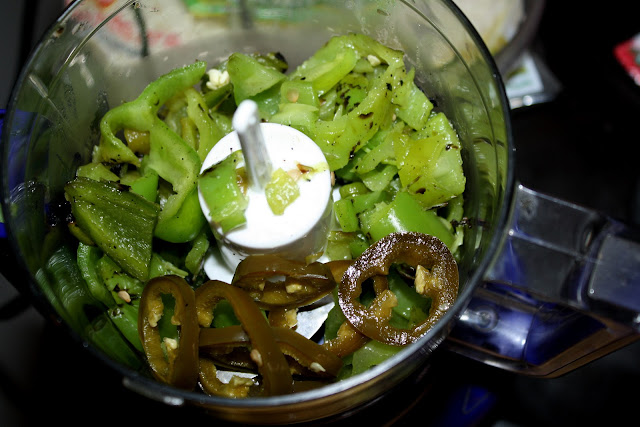 My Cuisinart Mini Prep has been neglected in Brooklyn. I think I have only used it twice in seven months. I brought it out this time and added all three peppers, then blended them together with a teaspoon of oil. 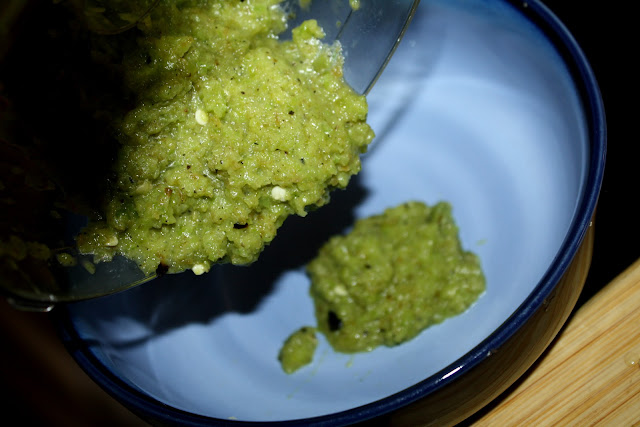 The puree went into a bowl.... 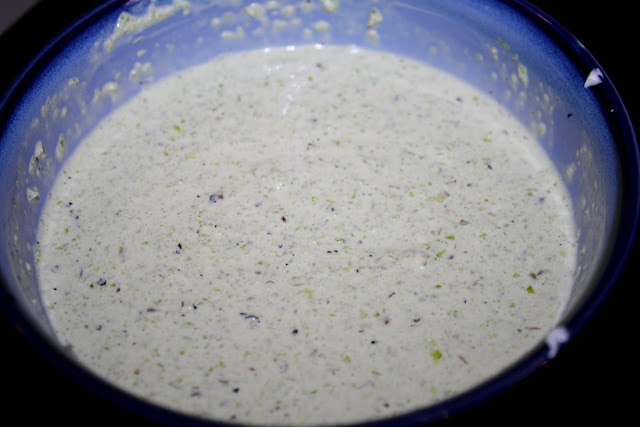 ... where I mixed it with mayo and a drop of vinegar, then let the bowl chill in the fridge for a few hours.

Now back to the chimichangas. 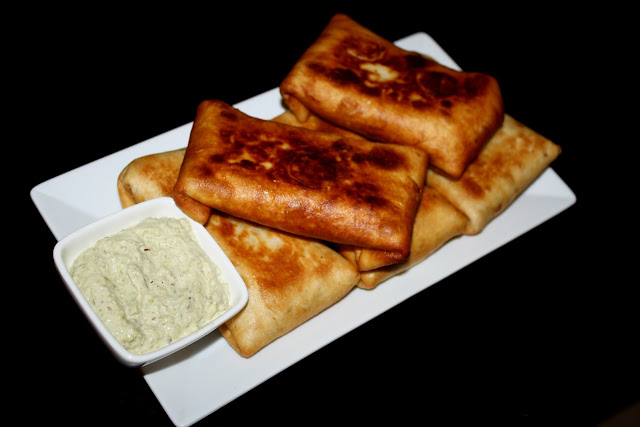 I removed them from the oil, let them drain, and piled them onto a plate with a container of the sauce. 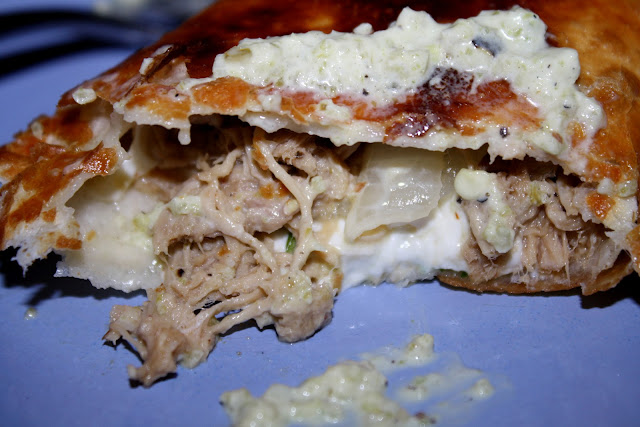 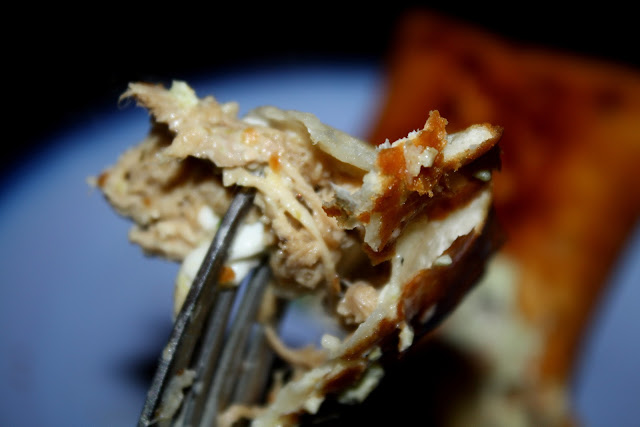 Actually, that's not entirely true. They were fantastic, one of the best things I have ever made. The crispy fried tortillas gave way to an interior of garlic-blasting, almost liquid-like pork and onions, swimming in a bath of that gooey cheese.

The roasted pepper sauce was delicious, but talk about gilding the lily. These chimichangas were so juicy and flavorful that sauce was completely unnecessary. 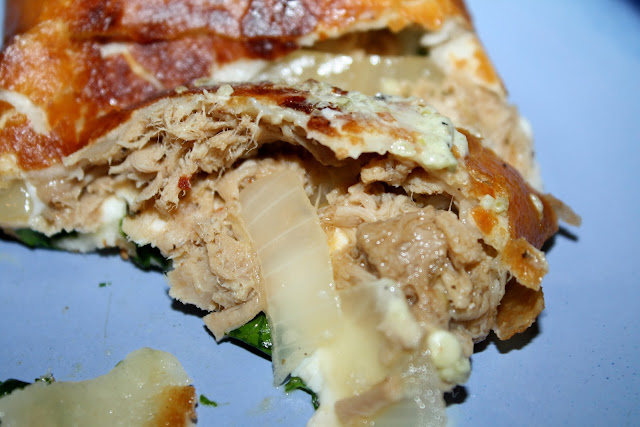 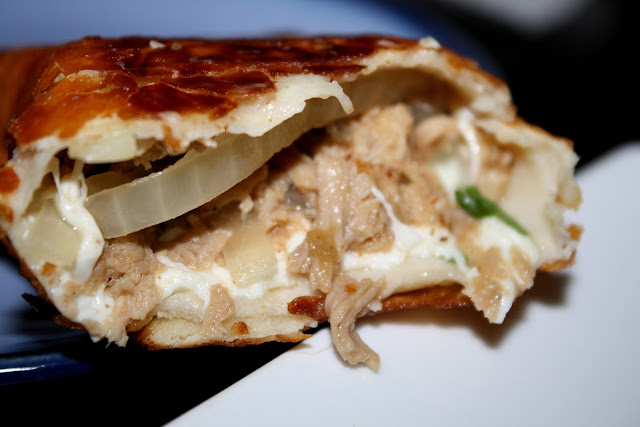 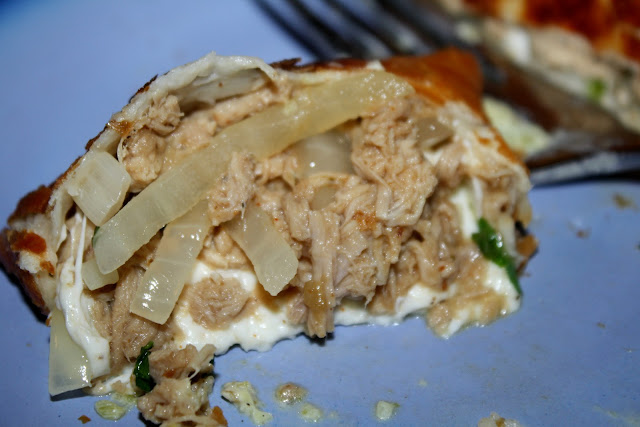 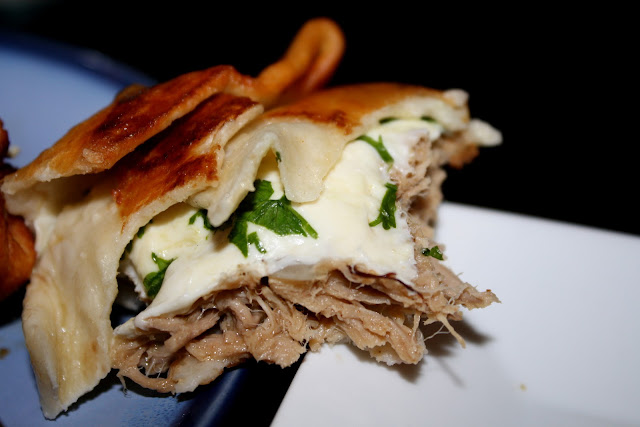 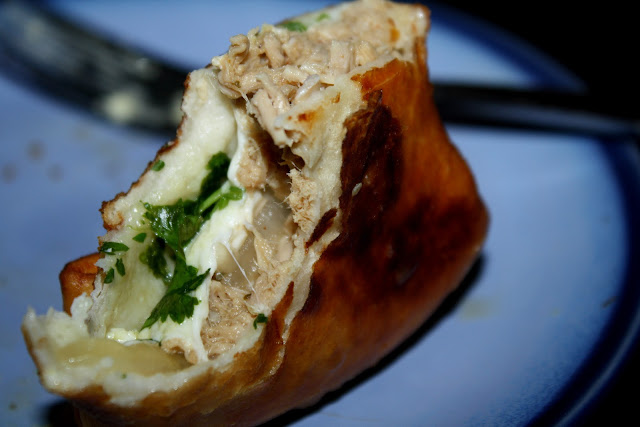 When I created the Steakhouse Burger Potato Skins at the beginning of October, I knew that was my high-water mark for the season. I didn't think any food could top them. And I was probably right about that. But damn if these didn't come very, very close. (Elizabeth and I had leftover chimichangas on Sunday afternoon, and that certainly was no competition: the chimichangas reheated wonderfully, and in some respects tasted even better after the flavors continued to meld overnight.)

I've already starting thinking about what to make this coming weekend, but I'm pretty sure it won't be as good as this.
Posted by JustinM at 10:00 AM

youre a magician, pp

You are a complete genius, it must be said. Of all the things I have seen on these pages, these may be what I want to eat the most.

I just wanted to tell you how much I've enjoyed your blog since I was linked here from GrubGrade. I live in South Korea where my access to good Western food is severely limited. Even the ingredients to make things like this are hard to come by. Anyway, since discovering this blog I have been devouring your posts like I would your food. It's a really fun read, keep it up.

And keep making me hungry!

Looks great! But I'm sure I couldn't make them without re-enacting the Jimmy Smits 'Enchilada' sketch from SNL...

With every picture that came up I was thinking, "Please let that be the last one. Please let the delicious torture stop."

Holy cow -- I showed this post to my blog-resistant Hubcap, who agreed with me that chimichangas were the only sensible choice for our dinner. Thank you for igniting the spark that led to Dinner Bliss. We would like to eat chimichangas for every.last.meal.now.

Does anyone out there remember the horrible commercials for Chilis or TGI Fridays or somesuch where some hairy brute would scream "GIMME A CHIMMY!" to the hapless-but-adorable server? Gads!

LOVE your blog, Justin! ( and I love it when Elizabeth chimes in, too )