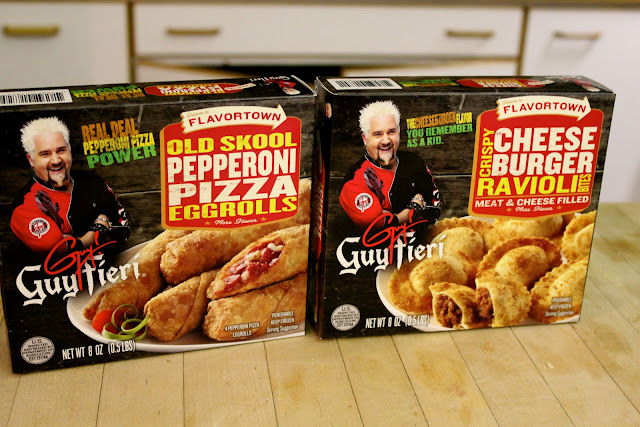 A few months back, longtime reader Michelle emailed to ask if I would be trying Guy Fieri's frozen foods. I had no idea about what she was speaking; I'd tried his sauces (one of which I really liked) and his salsas (which I didn't) but I had not heard of his frozen foods. A quick Google uncovered something called a "S'mores Indoors Pizza" and some of the worst reviews you will ever see. And it turned out that Walmart is the only place around Brooklyn where they were available, and even then it required more than an hour on the subway. So I told her no, unfortunately I will not be trying them.

But now that I have access to a car, I figured I could swing by a local Walmart and pick up a couple of things. So I did... two things called "Old Skool Pepperoni Pizza Eggrolls" and "Crispy Cheeseburger Ravioli Bites."

Look, I'm not going to rip on Guy Fieri. I've said some things about him in the past - all of which I meant and still believe - but there is no sport or originality in it anymore. You can form your own opinion on the guy. Lord knows there is enough evidence. 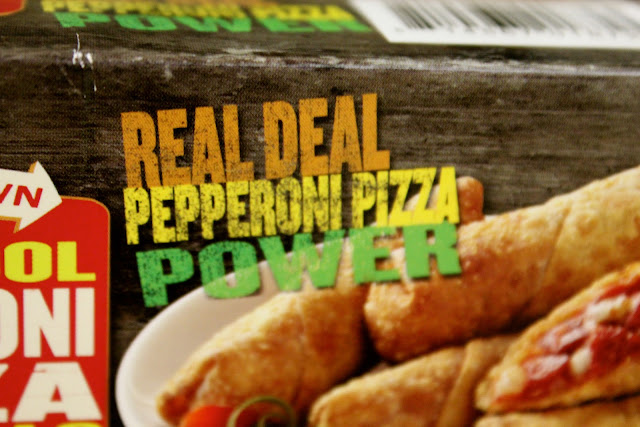 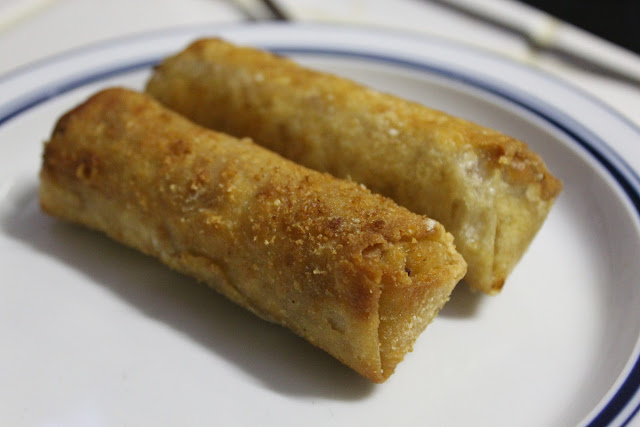 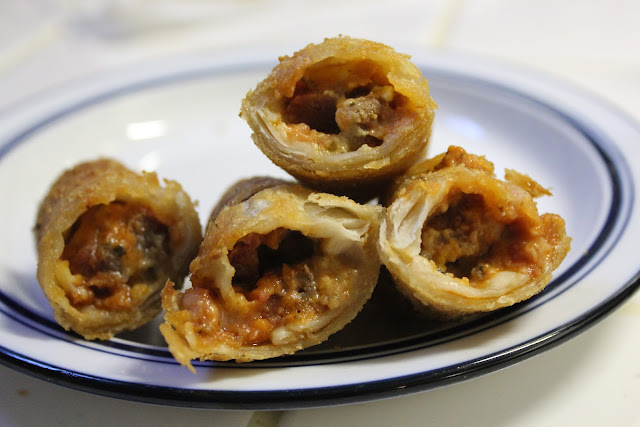 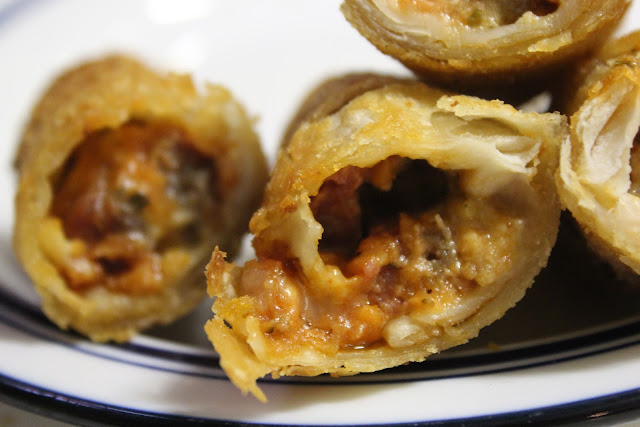 Pepperoni pizza is one of my favorite foods in the world but I don't think it had ever occurred to me to put it in egg roll form. These could have been decent if the sodium had been cut by 90%, but unfortunately all I could taste in each bite was an overpowering saltiness. I don't know who at the company tried these and said "Oh, nice, we have a winner here." 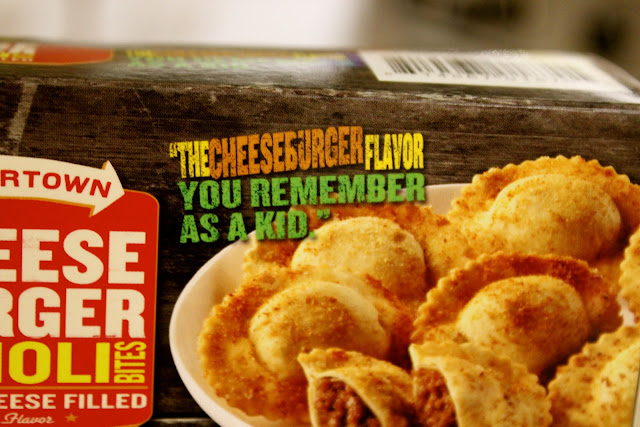 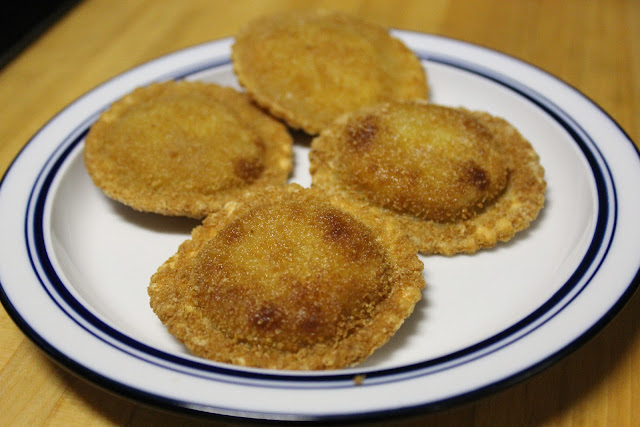 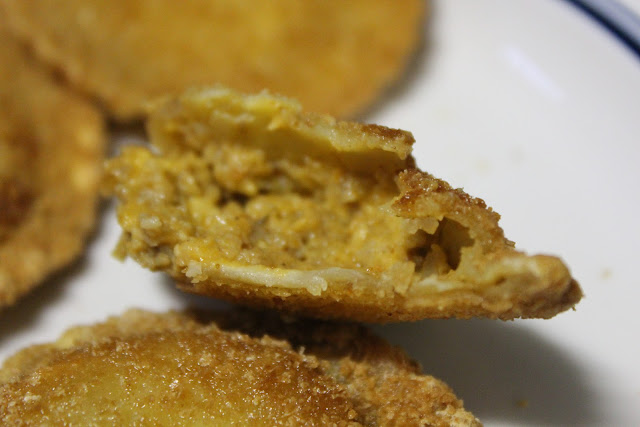 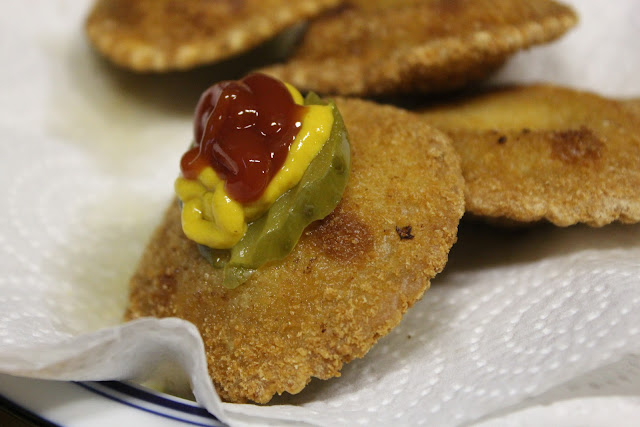 The egg rolls were gourmet compared to the cheeseburger ravioli. This was one of the worst things I have eaten all year, probably one of the worst things I have ever eaten. The flavorless breading enveloped an indeterminate mush. And indeterminate, flavorless mush. I put a slice of pickle and dollop of ketchup and mustard on one of them just to see if it could match "the cheeseburger flavor you remember as a kid," but it did not.

(I'm wondering if Michelle asked me to try these things just to see if I would actually do it. If that is the case, well played.) If I can be your canary in the coal mine, that's fine with me. Out of 1136 posts, I can think of two, maybe three things that I enjoyed less than these.
Posted by JustinM at 2:09 PM

I can actually really appreciate this review. It is too easy to simply dismiss anything Fieri as horrible simply because that seems to be the (arguably deserved) pervading sentiment. You've proven that you're willing to be open minded in the past, and if you had said you liked them I might have given them a try. Thanks!

I wasn't messing with you, but I WAS curious if they would be as nasty as they looked. And there is no Walmart close by me. Thanks!

why is guy fieri always "rollin' out!"

The Guy salsa's at my store have the "Closeout" stickers on them, meaning they weren't going to be stocked again. I thought of you.

You are one of the most responsive and accomodating food bloggers I've seen. Not sure I could have made myself pay money for these things, especially after reading copious reviews of that s'more pizza. I'm impressed. Now go have something that you will actually enjoy. =)

This could be a nice follow up - these DO look good!
http://traceysculinaryadventures.blogspot.com/2013/02/homemade-pizza-rolls.html