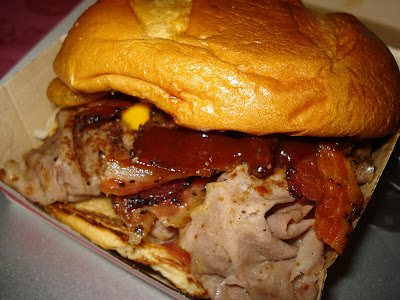 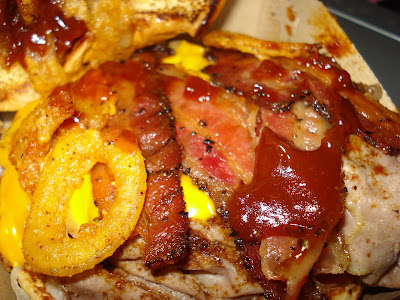 I can only remember eating at Arby's once in the first 28 years of my life. I may have eaten there more than that, but I do not remember more than that one occasion in Barstow. I was with my friends Troy and Ali; we had driven to Colorado to see the USC-Colorado football game and we were on our way back. We had eaten McDonald's for breakfast and Burger King for lunch so we finished off the day with Arby's for dinner.
-
But in the last couple years I have eaten at Arby's many times. A few months ago I tried one of their Roastburgers, and it was really good. I also tried their chicken roast club sandwich, and it was excelllent. So when I got a coupon for the new BBQ bacon cheddar Roastburger I was happy to try it.
-
This was very good, too. The sauce is tangy and the bacon, as usual at Arby's, was good. I cannot think of another fast food restaurant at which I would even consider eating their bacon. McDonald's, Carls' Jr., Burger King, Wendy's... I have had bacon sandwiches or burgers at all of these places and I have always removed the greasy, limp, fatty pieces of bacon. But Arby's has consistently had quality bacon. The onion rings on the sandwich were also very good.
-
I don't think this was as good as the chicken roast club sandwich, but it was another winning promotion from Arby's.
Posted by JustinM at 11:43 AM