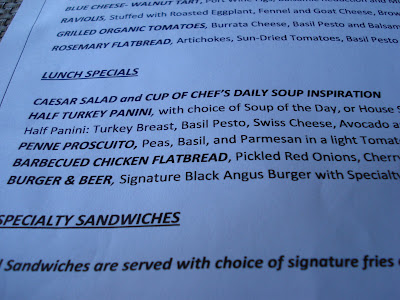 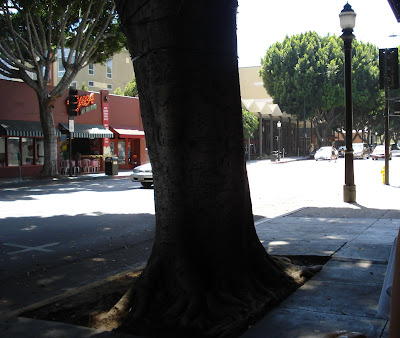 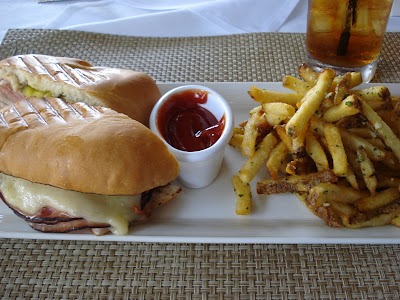 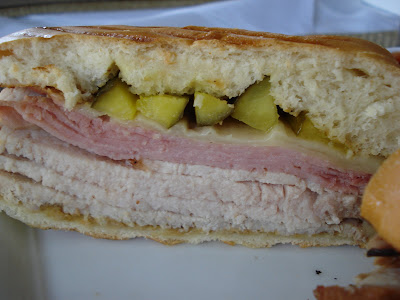 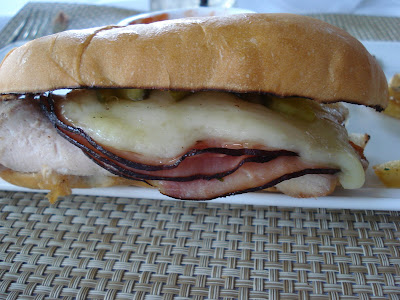 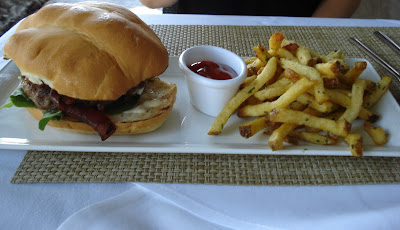 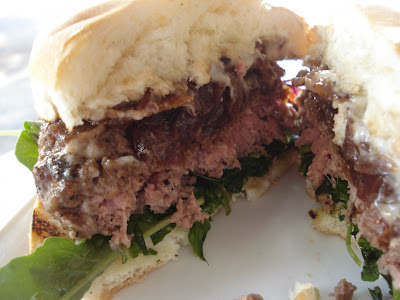 This is the third post about Green Street Tavern, but I never get tired of writing about it, just like I never get tired of eating there. It is probably my favorite restaurant in Pasadena at the moment, ahead of Gale's and Yujean Kang's, which is something I thought I would never say. Elizabeth had a half-day at work Thursday in preparation for the holiday weekend, so I picked her up and we drove back into town, thinking about where to eat lunch, eventually deciding we would go to Green Street if we could sit at one of their two outdoor tables.
-
I always enjoy sitting outdoors here. Green Street (the street, not the restaurant) is a bit of an oasis in the giant outdoor mall that Old Town - particularly Colorado Blvd - has become. The trees here actually change colors in the fall (sort of) and the ever-present breeze feels especially good in the summer. Green Street's (the restaurant, not the street) lunch menu was a little different than I remembered. Better, actually. There weren't the three burger choices that there used to be, but there were many more varieties of sandwiches, several appetizers, and a section called "lunch specials."
-
I had my eye on the barbecue chicken flatbread with pickled red onions and several kinds of cheese. Then I saw the Cuban sandwich. It is almost impossible for me to pass up a Cuban sandwich, but I haven't had a good one in the area since Cafe Atlantic closed its doors. (I once ordered the Cuban sandwich at Cheesecake Factory, which I would not advise.) Porto's in Glendale is excellent but I do not enjoy Glendale. I used to love Havana Beach Cafe in Montrose, but that closed and is now some kind of Italian cafe.
-
Not surprisingly, this sandwich was fantastic. In addition to a generous amount of pork and ham, they nailed two very important details to me: the pickles were large, cut pieces, as opposed to a couple thin slices just thrown in as an afterthought. And they went very light on the mustard. It was the perfect amount so that I could taste the meat. I have had many Cuban sandwiches over the years that have been drowned in mustard and mayo, to the point that all you can taste are the condiments. (The aforementioned sandwich at Cheesecake Factory had about half a jar of French's yellow mustard slathered on it.)
-
Elizabeth ordered the burger. I took a couple bites of it. I'm not going to say that I regretted getting my Cuban sandwich, but... damn that is a great burger. I'd forgotten just how much I love it. The caramelized onions are good enough to make you smack the table, and the peppery greens are a nice alternative to regular lettuce, a perfect complement to the sweetness of the onion.
-
With the exception of Hutch's, which will probably never be topped, this is my favorite burger in Pasadena. And I would say that the fries are my favorite in Pasadena as well: perfectly cooked and liberally sprinkled with garlic. It did not occur to me until just now to ask if they had some kind of aioli instead of ketchup. Next time, which I hope will be soon, I will find out.
Posted by JustinM at 11:53 AM

That is perhaps the most appetizing burger that I have ever seen.

That burger was divine.