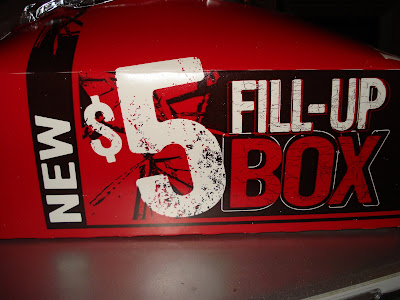 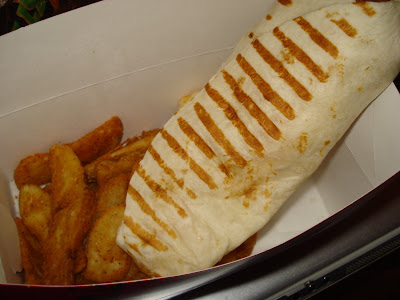 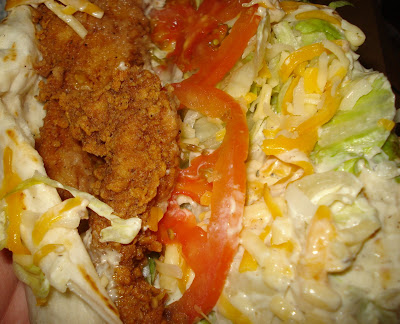 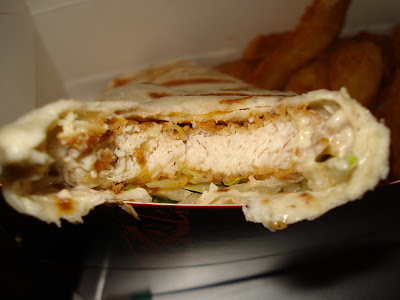 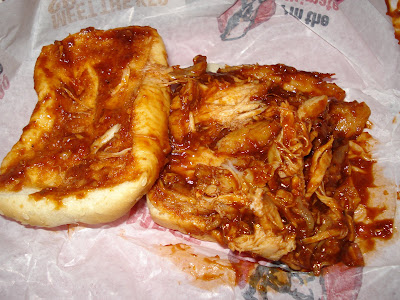 I learned a couple months ago, while reading a restaurant industry publication, that Subway's $5 foot-long promotion has been a massive hit and that the $5 price point is now considered the ideal number that customers respond to. That's why Quiznos introduced their "torpedoes" for $4, Pizza Hut came out with items starting at $5, and Boston Market created a $5 value menu. So it was not surprising to see KFC come out with their "$5 fill-up boxes." I decided to try one the other night.

You can choose from 4 different items to be paired with a side and a drink: two pieces of grilled chicken, three original recipe chicken strips, a "twister wrap," or five hot wings. In other words, nothing I really like. I wish there were other options, like popcorn chicken or boneless wings. I decided to order the twister wrap and hope it was better than the one other time I'd tried it.

I was impressed with the amount of food I received. There were more potato wedges than I could eat, and the wrap was a massive thing, much better than the wrap I had tried at KFC a couple years ago. The thing was the size of a brick and the chicken inside was nice and crispy, not the disappointing, limp chicken I had received the one other time I ordered the original recipe strips.

I did not like this wrap as much as I like a foot-long sandwich from Subway, but this is definitely a better deal. You get a large amount of food, and a drink, for only $5. If Subway were to offer chips and a drink for that same $5, it would certainly be a better deal than KFC. I am not sure if I will try one of these again. It was much better than I expected, but I usually get popcorn chicken at KFC, and that isn't available in the fill-up box.

By the way, I also had a coupon for 4 honey barbecue "Snackers" for 3 dollars. I've only tried that Snacker once and I did not like it. The bread-to-chicken ratio is way too high and the quality of the chicken is way too low. But I decided with that $3 deal I should at least give it another try. They were again lousy. The chicken was tough and there wasn't much of it. El Pollo Loco's chicken sliders are much better than these. I ate one of them with dinner, then the next day I reheated one in the microwave with Jarlsberg cheese and then added cole slaw and a pickle to it. That made it better, but still not good.
Posted by JustinM at 11:00 AM