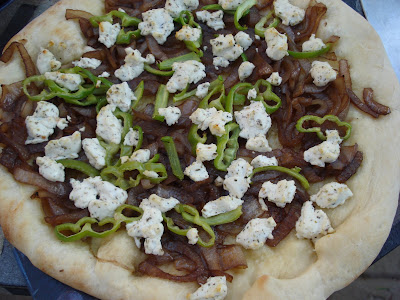 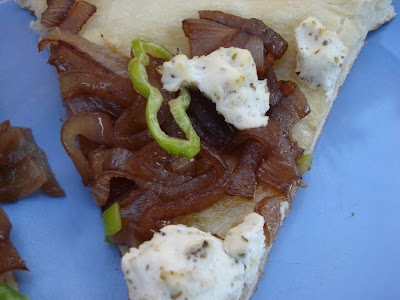 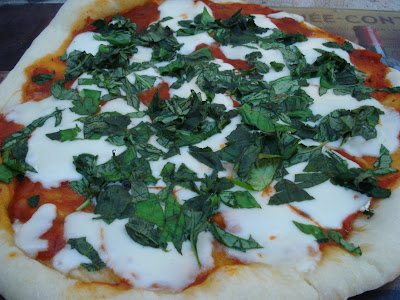 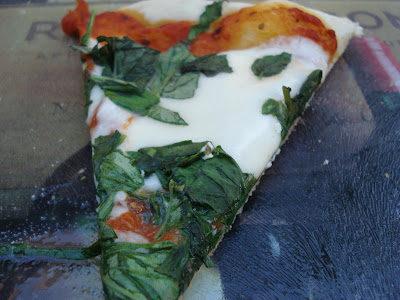 Last night I made pizzas for myself, Elizabeth and Tracie, and these are basically the same pizzas I have made many times before, so I will keep this short. But I made slight variations to each so I wanted to share.
-
The pizza I came up with a couple months ago and have made several times is one with Sicilian chili oil, goat cheese, caramelized onions, and chives. I tweaked that a little. Instead of a quick caramelizing of onions in my stir fry pan, I cooked them in our new slow-cooker for several hours, with some olive oil and balsamic vinegar. These were the sweetest onions I have ever tasted. And instead of adding chopped chives to the pizza, I sliced a poblano peppers and added it. This was good, but not hot enough. I wanted to start with a mild pepper, which this certainly was. Next time I will go for something a little spicier.
-
For my usual fresh mozzarella and basil pizza, Tracie brought over a large amount of basil from a plant at her house that has been doing great (much, much better than our basil plant.) So I carpet-bombed this pizza with it. This was fantastic. Fresh basil is one of the greatest flavors in the world.
-
I may have to take a break from making pizzas for a while. For one, it's already hot enough in our kitchen without cranking up the oven all the way. Last night, with the oven on, it was probably 120 degrees in there. And second, after the party last month where my friends Tyler and Zach made pizzas in the wood-burning oven, the pizzas I have been making, while great, have been falling a little short. It's like trying to get all excited about the Lakers winning this year with Kobe, Pau, and Lamar. I mean, yeah, I'm happy they won, but I grew up watching Magic, Kareem and Worthy. How much can I be expected to love this year's team? Years ago I bought a bootleg of the Rolling Stones in Paris in the middle '60s; all they played was American R&B. It's impossible for me to see the Stones now without comparing it to that bootleg, and they always come up short.
-
(And yes, I just compared that pizza party to the Showtime Lakers and 1965 Rolling Stones. It was that good.)
Posted by JustinM at 9:35 AM