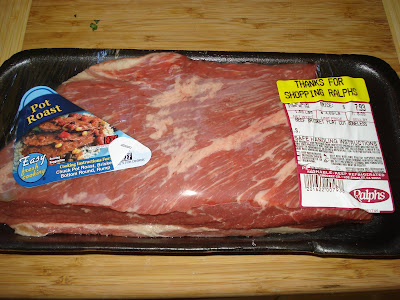 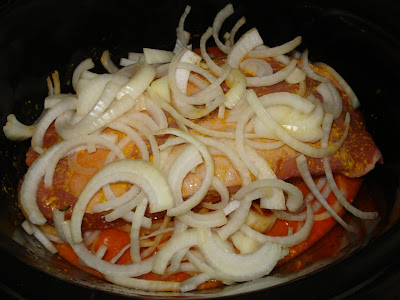 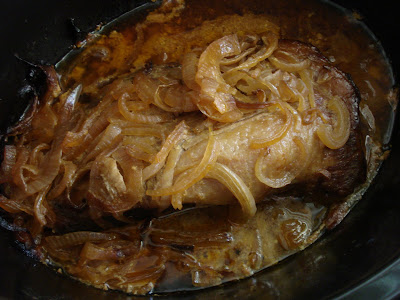 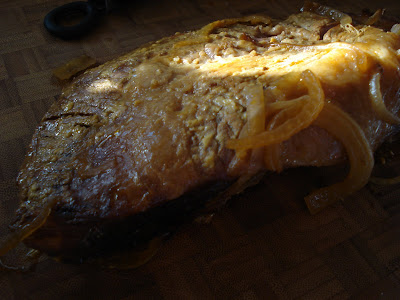 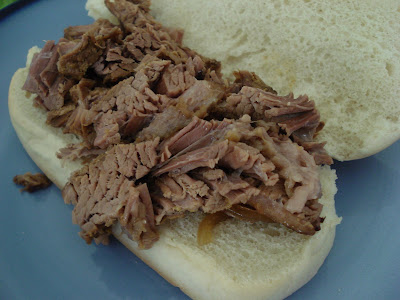 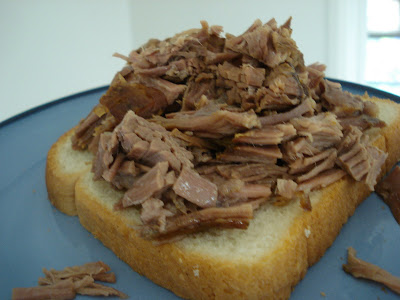 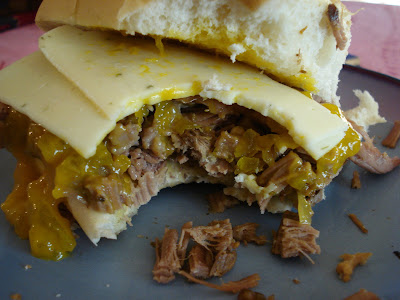 When my mom retired last month she was given a lot of presents. Some of them were quite nice but some of them were not. She gave me a couple of things she got from Macy's that were, how shall I put this, not attractive, and told me I could exchange them and get something for myself. (I offered to take the $300 gift card for Amazon.com or the $75 gift certificate to Smitty's Grill, but apparently she valued those more than the plastic earrings.)

I've wanted a slow cooker for a while, and Macy's had a very nice one on sale for 30% off, so that's what I got. Yesterday I took a brisket from Ralph's and put it in the slow cooker at 7 AM. I added a large sweet onion that I had sliced, about a half a cup of beer, some mustard, chili powder, and hot sauce. I did a couple things in the morning and when I returned at about 9:30 it already smelled fantastic.

In the evening I took the brisket out of the cooker and let it rest for a couple minutes, then trimmed off some of the visible fat. I sliced it against the grain and chopped up some of the larger pieces. I made a sandwich for Elizabeth on a French roll, and myself a sandwich on Weber's white bread.

The meat was fantastic. It was tender with just the right amount of spice. It wasn't as good as a smoked piece of brisket - no matter what some people claim, you cannot cook meat in the slow cooker that is as good as barbecue - but it was still pretty damn good and much, much easier to make.

After we were done I asked Elizabeth if she wanted another sandwich. She said she would split one with me. So after I cut one in half for us, I added some mustard relish and a couple slices of roasted garlic cheddar cheese to my half. It was good, although it would have been much better if I had toasted it in the oven for a bit to let the cheese melt. But I was hungry and had no patience to wait.

Next up I think I will cook a small pork butt and see how that turns out.
Posted by JustinM at 10:53 AM