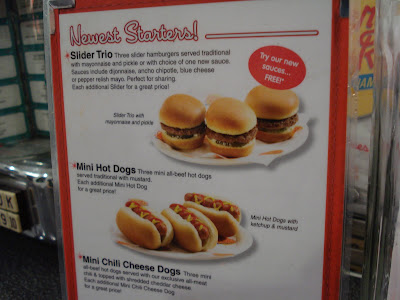 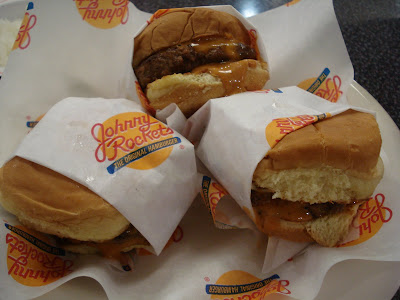 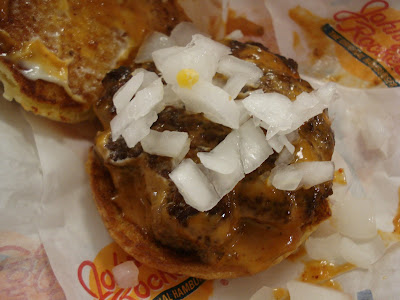 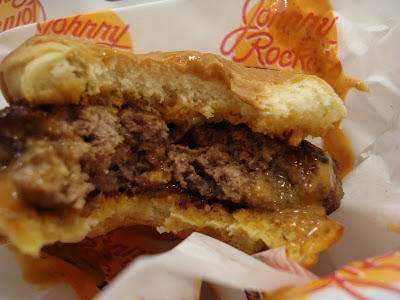 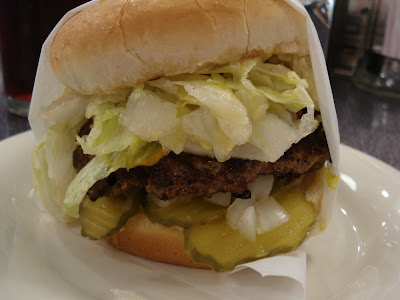 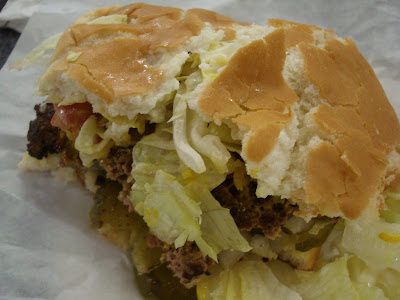 It's been several years since I've eaten at Johnny Rockets; my last visit was a triple-digit summer day in Silicon Valley when my Nikes actually got deformed while standing on an iron grate waiting to cross the street. I've passed by the Old Pasadena location hundreds of times since then, but never stopped in to eat.

Recently, Johnny Rockets joined the slew of other restaurants offering sliders. I'd been so disappointed with the rest of the sliders I've tried that I didn't consider trying Johnny's. Last night Elizabeth and I were doing some shopping in Old Town and I was very hungry and craving chili cheese fries. I figured we could get some at Johnny Rockets and, if the sliders were still on the menu, I could try those, too.

The sliders are served with your choice of four sauces: ancho chipotle, dijonaisse, blue cheese, and pepper relish mayo. I opted for the ancho chipotle. If I was still hungry after eating them, I planned to get an order with the pepper relish. Since I was sitting at the counter, I got to watch the cook throw three bundles of fresh ground beef on the grill, press them down, and grill them.

The sliders were great. These were the best I have had in a long time, not only light years better than any fast food sliders, but better than Jake's across the street, whose mini burgers I have always enjoyed. The ancho chipotle sauce was tasty and spicy. I have become accustomed to restaurants offering a "spicy" sauce that tastes only slightly spicier than ketchup, so it's nice to come across a sauce that is actually spicy. The bun was nice and soft. The sliders do not come with anything on them other than the sauce, so I added some diced onion to give them a little crunch.

Elizabeth ordered "The Original" - a burger with standard toppings. She enjoyed it, although it fell apart after just a couple bites and she had to eat the rest of it with a knife and fork. (The tomato was incredibly juicy and had turned the bun into a soggy mess.)

I was filling up after eating just a couple of the sliders, and full after eating the third. So there was no way I was getting another order. But I would like to go back and try them again with a different sauce. At just under $5, they are comparably priced to fast food sliders, but they are so much better.
Posted by JustinM at 10:22 AM