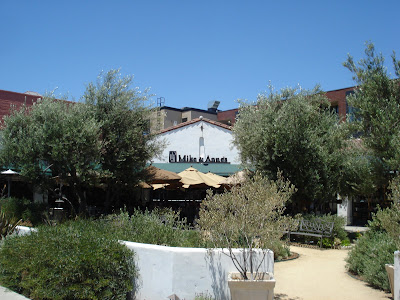 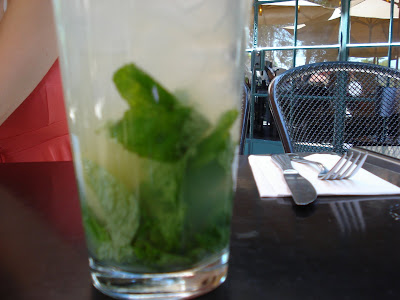 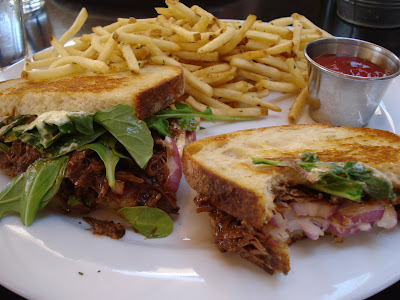 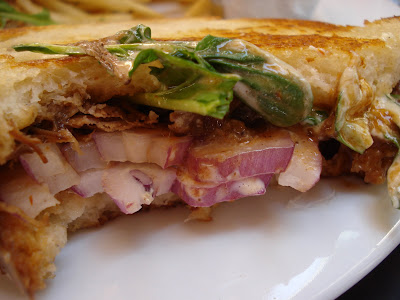 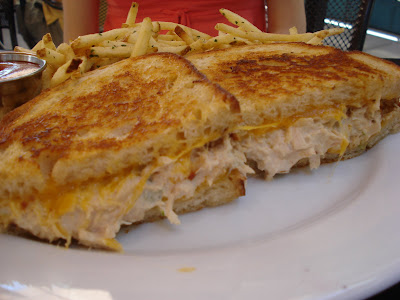 I have been aware of Mike & Anne's for more than a couple years, and, although it certainly looks like a nice place to eat, I never bothered to try it. Actually, that's not entirely accurate; once, a few months ago, I stopped by on a warm winter day to have a late lunch. Predictably, the patio was packed with people who had the same idea as I. There wasn't an empty seat on the patio. "I'm sorry," the hostess said with a patronizing look, "we're closed." Apparently they close at 2:30, even when it's a weekend day and they have a full house.
-
This weekend I was looking for a place to eat outside, so I decided to give Mike & Anne's another shot. The patio was again crowded, but it wasn't packed, and we got a nice table under a couple umbrellas shading us from the sun. I ordered an iced tea and Elizabeth got a mint lemonade. I have never seen a drink with more mint in it. I took a taste; it was very good. I'm not sure if I could drink a whole glass of it - it was like chewing an entire pack of mint gum - and it certainly wasn't as good as the rosemary lemonade I discovered at a wedding in Los Olivos a few months ago, but it was refreshing.
-
I had the "slow braised bbq shortrib sandwich." This was fantastic. In addition to the red onion and arugula, which, despite being two of my favorite flavors, really didn't add anything to the sandwich, there was a horseradish sauce with a fair amount of bite to it. I love horseradish, but I am disappointed when I receive a horseradish sauce that tastes like sour cream with only a tiny hint of horseradish. I want something that is going to make me notice it, something that complements the sweetness of shortribs in barbecue sauce. This was almost the perfect sauce.
-
Elizabeth was trying to decide between an omelet (there was a breakfast menu on the flip side), the grilled cheese sandwich, or the tuna melt. I was hoping she went with the grilled cheese (with sweet onions and whole grain mustard) so that I could have a couple bites. I did not tell her this, though, because I didn't want to influence her decision. It doesn't seem fair to suggest she order something based on my desire to eat her food. In the end she went with the tuna melt. Although I loved tuna when I was a kid, I'm not a big fan of it now. I don't hate it, there is just something about the taste that I don't really like. I tried one bite of her sandwich. It was exactly what I expected.
-
We both got shoestring fries with our food. These were beautifully cooked fries with garlic and parsley. I could have eaten a bucket of these.
-
I have read many reviews of Mike & Anne's that complain about the service. The service we received was good. But there is a very cold, pretentious vibe about the place. I don't know if I have ever seen a restaurant where people looked more annoyed to be eating there. Certainly I have never seen that in California. After lunch, we walked down to Firefly Bistro to look at their summer dinner menu. It was packed with a group celebrating a 50th wedding anniversary. The scene was the exact opposite of Mike & Anne's: there was laughter everywhere and people were having a great time. There were no tables of sullen-looking people reading books or glancing disapprovingly at other diners. I really liked my food at Mike & Anne's but I can't lie: I wished we'd gone to Firefly instead.
Posted by JustinM at 10:36 AM

I love when my Mojito comes with "too much mint" don't know why... Anyhow - they went heavy withe the red onion, no?

Nice, I love the end bit about the differences in the atmospheres of the two places. I've never been to Mike & Anne's and only have wanted to just because I feel like I should go. I've always loved Firefly and will happily stick go going there when the rare occasion happens that I want to dine out.

Melissa: it definitely looks that way, no doubt, but it wasn't overbearing. The picture is deceiving; it makes it look like there was more red onion than shortrib. I promise you that was not the case.

Taqueau: it reminded me of 750ml or Mi Piace; there was a negative vibe exhibited by many customers and employees, as if eating there should be a chore and not a pleasure.

I never dined at 750ml, but I remember the time we were waiting at the bar for Elizabeth and the bartender was quite nice. The food did not look very impressive though, and I agree with you that it had an air of weirdness about it. Food should make people smile, for f*ck's sake.

The bartender was nice to you because you're hot. I thought both the dudes behind the bar were arrogant clowns who acted like they were working at the French Laundry. There were not friendly to me.