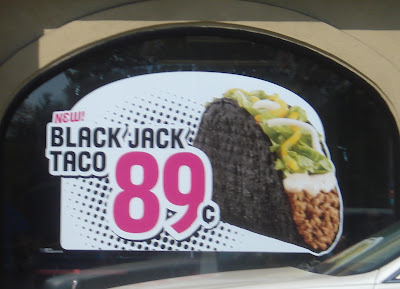 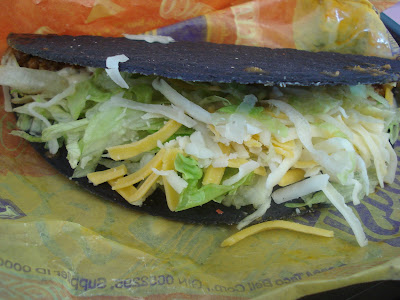 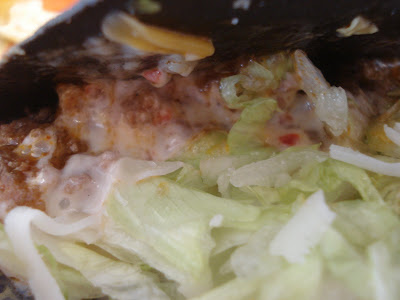 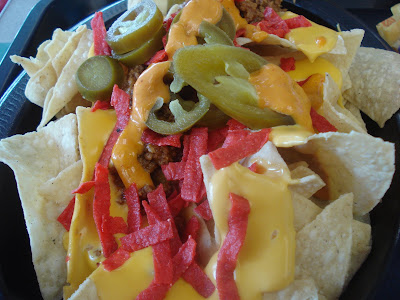 I'm not sure if I have ever stepped foot inside a Taco Bell before, and maybe they're all like this, but the one I went to on Sunday was weird. I mean, really fucking weird. This was about 2 in the afternoon and I'd assumed it wouldn't be too crowded, but there were at least a dozen people milling around by the counter waiting for food. There was trash on the floor and empty paper cups and straw wrappers were scattered on the counters.
A group of tattooed and pierced teenagers sat at some of the tables, putting a lot of effort into looking like they don't put effort into anything. A boy, perhaps ten, was screaming in a high pitched voice at one of the employees: "I want a breadstick! Give me a breadstick!" His dad came over to him, told him to stop, and the kid pushed his dad and started throwing punches at him. The dad, not surprisingly, did nothing to discipline the kid.
I ordered the Black Jack taco - basically a regular taco with three kinds of cheese and a "zesty pepperjack sauce." I also ordered some volcano nachos without beans. I've had the volcano taco a couple times and I think it's pretty good, so I decided to try the nachos. I have never thought much of Taco Bell's regular tacos, though. For the same price there are hundreds of places nearby that have better tacos. (I once walked by a Pizza Hut in Manhattan that was full of people, a curiosity somewhat analogous to the drive-through line at the Taco Bell in Alhambra.)
This taco was pretty damn good. The sauce was not the least bit zesty, but it was cheesy and I liked it. It was not very filling - not that I expected an 89 cent taco to fill me up - but it was a tasty snack. It would probably take at least 6 of these to fill me up, and, although that wouldn't be expensive, there are 17 grams of fat in each taco. If I'm going to be eating 6 tacos, I will stick with Taco Lita.
The nachos were lousy. There wasn't enough of the hot sauce, the melted cheese was basically cheez wiz, and the jalapenos weren't very spicy. Ordering this was clearly a mistake.
Posted by JustinM at 8:21 AM

From the pics, the food looks artificial or plastic. But, you get what you paid. (But, still probably better than our Noodle House!)