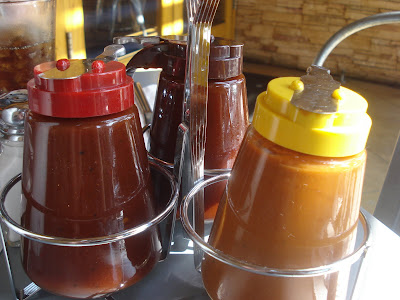 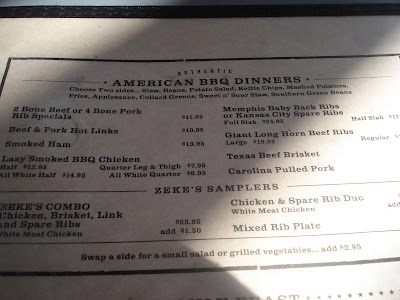 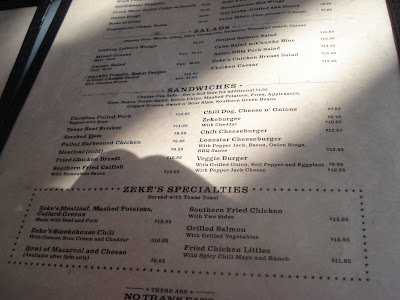 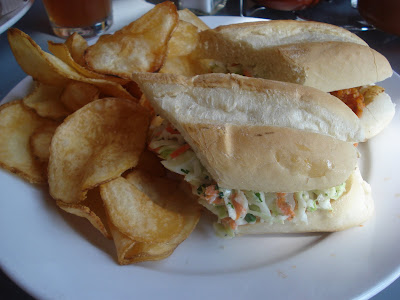 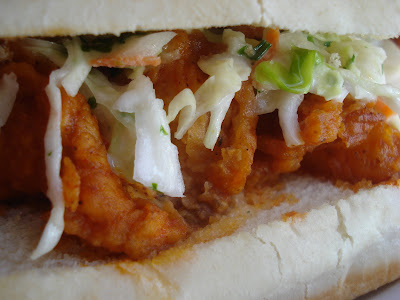 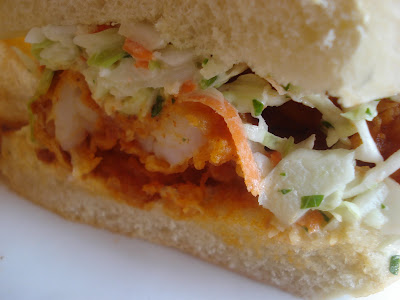 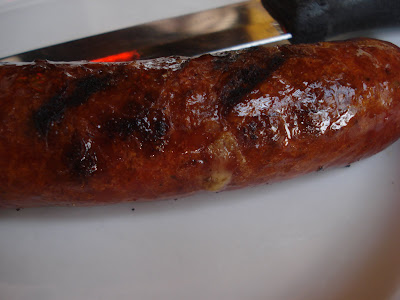 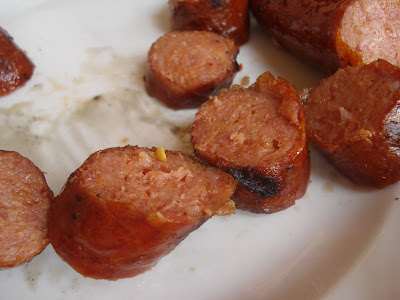 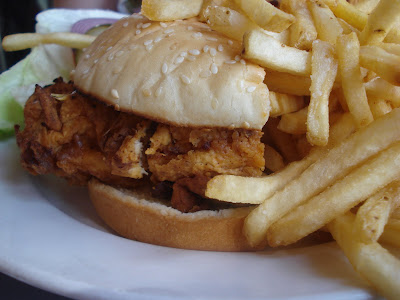 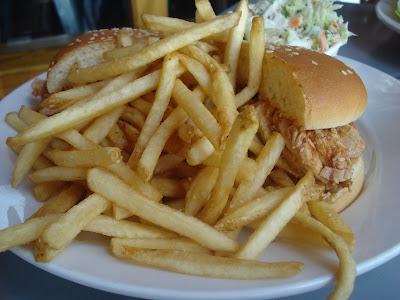 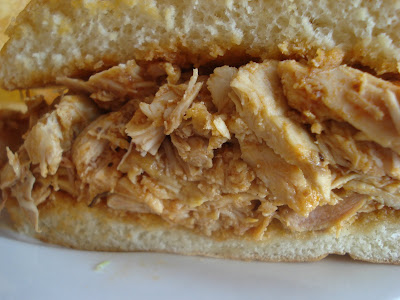 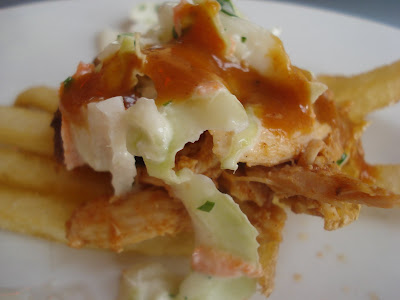 A high school friend of Elizabeth's was staying with us for the last few days, so over the weekend we took her up to Montrose to walk around, look in the shops, and eat lunch. We let her pick the place and she decided upon Zeke's. I've written about Zeke's before on the barbecue blog, but for this meal I didn't have barbecue (well, I had some barbecue,) so I'm putting it here.

Zeke's always has interesting looking, non-barbecue specials written on a couple of blackboards, but I can't remember ever ordering one. (The only time I've ever ordered something off the specials menu was a chipotle pork quesadilla that was good, but not better than their regular barbecue.) But that afternoon they had a "Buffalo shrimp sandwich" special listed for $12.95. I asked the waiter what exactly that meant. He hesitated for a few seconds.

"Ah, well, uh," he stammered, "they don't really tell us much about the specials."

This seemed dubious to me but I told him I would gladly wait while he found out. "It's fried shrimp, I assume," I said.

"No," he replied. "The one thing I know about the sandwich is that the shrimp are grilled."

I was not surprised when he returned a minute later and said: "My bad, the shrimp are fried." That sounded pretty good to me - I have always had a soft spot for buffalo shrimp, not counting the Godawful ones at Hooters - so I ordered it with kettle chips and an a la carte hot link. Elizabeth also thought the sandwich sounded good, and I suggested she order her usual pulled chicken sandwich and we share. So she ordered that with fries and cole slaw. Lauren ordered the fried chicken breast sandwich with fries.

The food took longer to arrive than usual - probably 25 minutes - but it was a beautiful day and we were sitting outside. They kept refilling our iced teas and I could see the football game on the flatscreen TV inside, so I wasn't complaining about the wait.

The food arrived and Elizabeth and I exchanged half of our sandwiches. I took one bite of the buffalo shrimp sandwich; it was outstanding. I immediately wished I hadn't agreed to share sandwiches with her. (I joke... slightly.) The pulled chicken sandwich was good, but it couldn't compare to the shrimp. The only complaint was that they were pretty skimpy on the shrimp. Elizabeth asked what I thought of it and I mentioned that I loved it, but thought it was a little pricey at $12.95 for the amount of shrimp we got. Literally 30 seconds after I made that statement, a guy came out and erased the price of the sandwich on the blackboard and wrote in its place $9.95. Excellent. From now on, even when I'm craving barbecue, I'm going to try one of their specials if it looks good.

My hot link was very good. I have always liked the hot links at Zeke's, as much as any barbecue restaurant around here (although I have yet to try them at Perdue's.) Lauren really liked her fried chicken sandwich, and she offered me some, but I was too full to try a bite. She took half of it home with her and I was looking forward to eating it the next day after we took her to the airport, but she forgot to take it out of the car so it sat there for about 24 hours. I chose not to eat it.

There was some shredded chicken left on the plate that had fallen out of the sandwich, so I took a handful of Elizabeth's fries, topped them with the chicken, added some of her cole slaw, and poured a dollop of their Carolina mustard sauce over the whole thing. Predictably, it was awesome.
Posted by JustinM at 8:44 AM