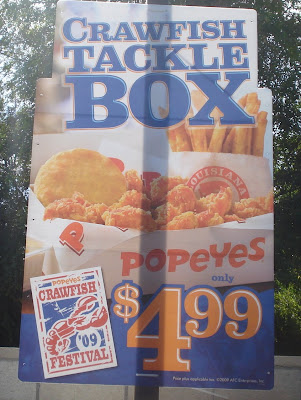 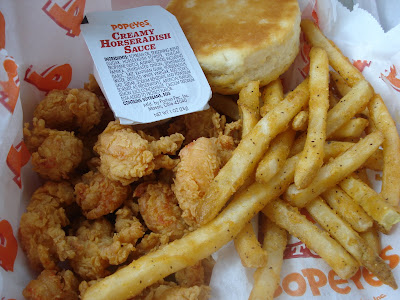 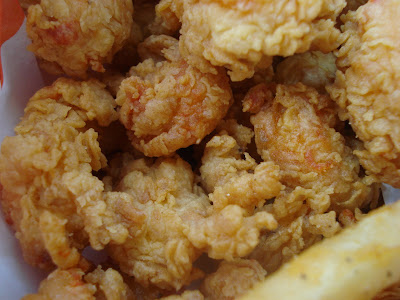 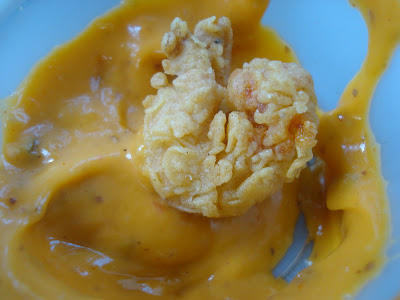 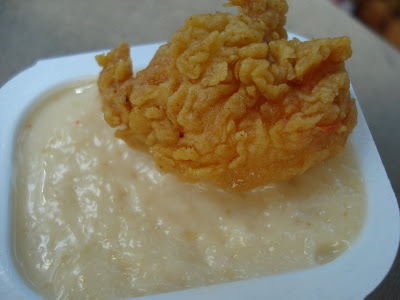 Thrice I suffered shipwreck. A couple weeks ago I saw an ad online for Popeyes crawfish. I love Popeyes and I love crawfish - once, in New Orleans for JazzFest, I ate five orders of fried crawfish for lunch -  so I immediately put trying their "tackle box" at the top of my list. The next day I was in Riverside and I went to my favorite of the many Popeyes in the area. They had a little pop-up ad on the counter saying "Crawfish Coming Soon." I asked if they had them and was told no.
A couple days later I went to the Popeyes in Alhambra, which had a big sign in the window advertising crawfish. "I want the crawfish!" I said triumphantly.
"We don't have them yet," I was told.
"But you have the sign up!"
"We were supposed to get them last week."
"When will you get them?"
"We have no idea."
This was upsetting. When I'd seen the sign advertising crawfish, I'd foolishly assumed that they would actually have crawfish and I'd texted my friend Jim - who went to law school at Tulane in New Orleans and is as big a Popeyes fan as I am - that Popeyes had crawfish and that I was about to eat them. When I found out they didn't have any I sent him another text asking if this was a breach of contract on their part and I could burn the place down and get away with it. He said probably not.
(Speaking of people named Jim who went to Tulane Law School, I saw a interesting documentary on Jim Garrison over the weekend. His name was "Earling" until he was in his 40s, when he changed it to Jim, and, unlike the honest crusader that Kevin Costner portrayed him as in JFK, he was supposedly a mean-spirited, corrupt bully. This has nothing to do with anything, I just found it interesting and I like this blog to contain some actual useful information every once in a while.)
So I left and went to the other Popeyes in Alhambra, the one I went to a year ago where the owner decided he would talk to my friend and me the whole time we ate, asking us our entire life story. They didn't have a sign up but I was there so I went in.
"Do you guys have the crawfish?" I inquired.
"No."
"Are you going to get them in?"
"No."
"Um, okay. Thanks."
I gave up on the crawfish for about a week. But one day I dropped something off to my mom at her work just off of Lake Ave. and I drove by the Popeyes a couple blocks away. They had several signs advertising the crawfish; I was hungry so I figured why not give it a try.
"Do you have the crawfish?" I asked the woman over the drive-through speaker.
"We sure do," she said.
I got the tackle box and, in case it wasn't good, I got an order of their nuggets, which I have always loved. As it turns out, the crawfish were fantastic. Perhaps the best thing I have ever had from Popeyes, and that's saying a lot. They are served with a horseradish sauce that is actually spicy and I devoured it. I had also requested some of their Delta sauce, which cost me a quarter but was well worth it. The Delta sauce goes very well with the crawfish and I recommend trying it.
I don't know how long these will be around, but hopefully quite a while.
Posted by JustinM at 5:16 PM

It sounds like maybe Popeye decided to genetically engineer the clawfish to meet the demand.

Well, as long as it looks like the real thing & tastes good.

I just drove 40 miles one way to try the crawfish dinner. Guess what? Yup. "We don't have them yet." What the crap?

Ben, my empathy for you is matched only by my complete lack of surprise. Hopefully you didn't have to turn around and go home in defeat; hopefully you were able to salvage the trip by going somewhere else for a good meal.

i am amazed at how good the crawfish tackle box thing is. . . very very good for fast food.

I absolutely agree. Popeye's has had some great items over the years, but I think this is the best. It's not just good by fast food standards; I have had fried crawfish at restaurants in NOLA that cost three times what Popeye's cost. Popeye's crawfish would hold up just fine against them.