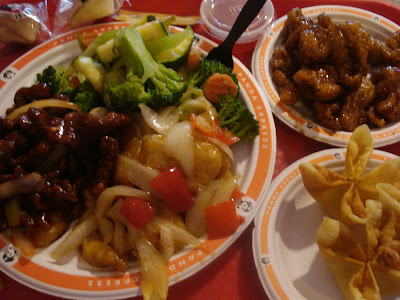 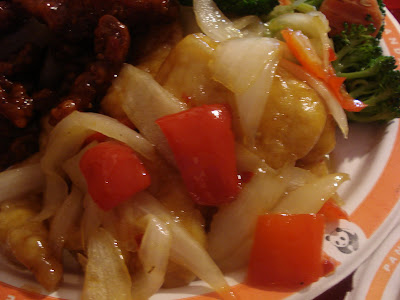 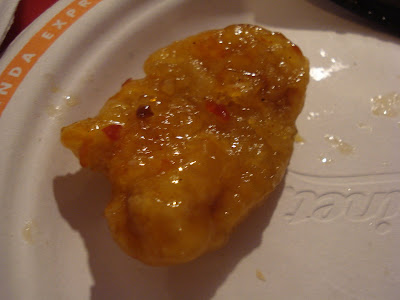 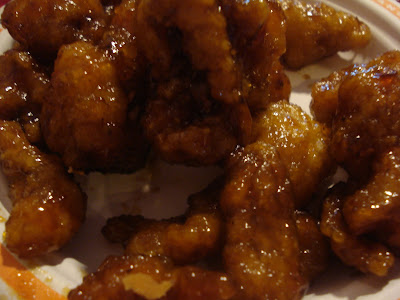 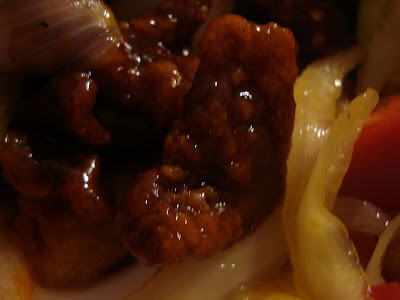 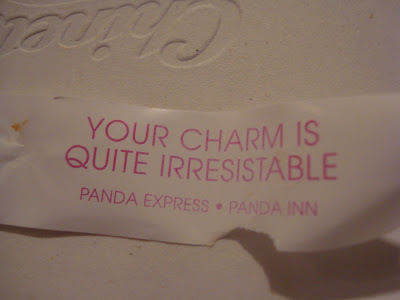 I've always kind of liked Panda Express, but I've never loved it. When I was younger I would go there at least once a month and get orange chicken, but as I get older I find that I hardly ever go there. I doubt I visit it more than once a year at this point. There are many better - and, at lunch time, cheaper - Chinese places around, so when I'm in the mood for Chinese I don't even consider Panda. But they have been promoting their new "SweetFire Chicken" a lot recently on Fox Sports, so Sunday, after running some errands, I decided to give it a try.
I went by the South Pas location, on Fair Oaks, and there was a line of several people out the door. This was almost 2 PM and I was really hungry. I hate waiting in line when I'm in the best of moods, so I had no desire to do it at that point. I drove to the Lake Ave. location, figuring that if it was crowded I would just go to Rubio's or Wahoo's, both of which are close by. There wasn't a single person in line there, though.
I ordered more food than I normally would, for a couple reasons. First, as I mentioned, I was really hungry. And also Elizabeth was with me and, even though she said she wasn't hungry at all, I could see her wanting some of my food if it looked good. So I figured I would get plenty in case I was going to share. I got the three entree plate with steamed vegetables, Orange Chicken, Beijing Beef, and SweetFire Chicken.
Let's start with the good: the Beijing Beef was great. I have had this three or four other times, and this was the best batch I have had by far. It's never going to be confused with Yujean Kang's crispy beef, but it was great for what it was.
The not-so-good: the SweetFire Chicken was white meat chicken, which was high quality, but the sauce was disappointing. It was a little bit sweet, but there was zero amount of spice. The dish is described as having a "zesty sweet chili sauce." There was nothing zesty about it. They should just call it Sweet Chicken.
The downright bad: the Orange Chicken was as bad as I have ever had at Panda. It must have been sitting in the steam tray for quite a while. The chicken was not crispy at all and the sauce was a gelatinous mess. The vegetables also must have been sitting out for a long time because they were very overcooked. I would have had to wait in line for a long time at the South Pas location, but I bet the food would have at least been fresh.
I also got some cream cheese wontons. There was nothing special about them and we both agreed the wontons at Pickup Stix are much better.
I don't think I will go back to Panda Express until the next time they release a new product, which I'm sure I will try. If it's dinner time I will stick to Pickup Stix. Not only do I like their food more, but they usually offer coupons and promotions. And if it's lunch time, there are many, many better options for Chinese. The lunch specials at Panda Inn, Golden China, and Oak Tree Inn are cheaper and much fresher.
By the way, they also gave me a fortune cookie that was completely false.
Posted by JustinM at 9:21 AM

I would like to exchange links with your site animmovablefeast.blogspot.com
Is this possible?