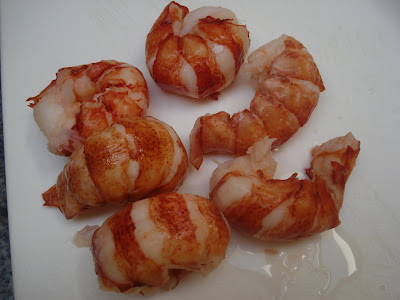 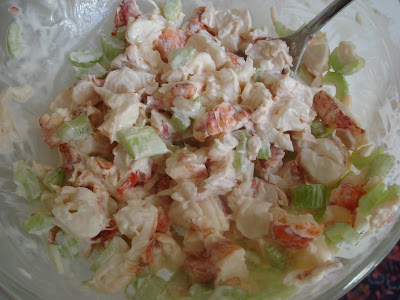 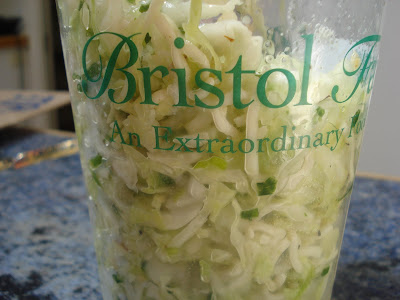 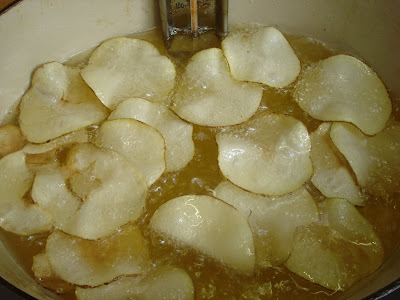 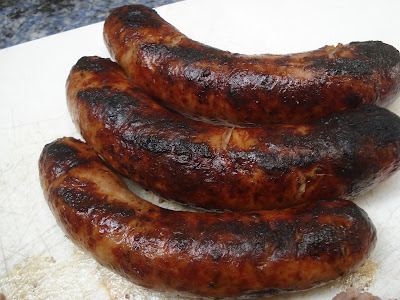 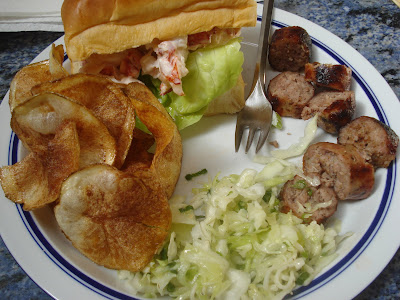 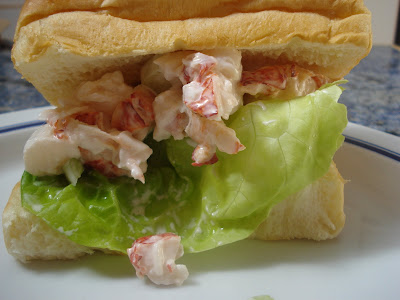 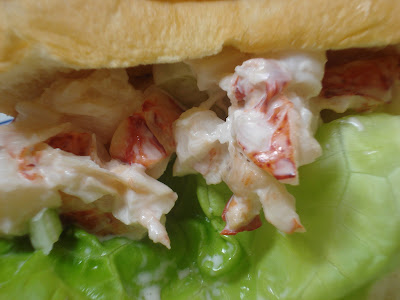 There is almost no food I love more than a lobster roll. On occasion I have ordered them at restaurants in California, and invariably I have been disappointed. Some of them are decent, but they almost all cost more than twenty bucks, and something gets lost in translation. Years ago I ate a $9.95 lobster roll at the Mill Wharf Pub in Scituate, Massachusetts, overlooking the ocean on the first weekend of autumn. Not surprisingly, I have been unable to recapture that moment anywhere around here. C'est la vie.

Saturday I was over at my parents' house to watch the UCLA-Cal game (although I ended up watching more of Florida-Arkansas and USC-Notre Dame, as those were better games.) Continuing in the tradition of making pseudo-gourmet bar food during football games, I had earlier in the week planned to cook some meatballs in a Guinness reduction. But that was when the weather was cool and rainy and it felt like autumn. It got hot again and I did not feel like meatballs. So I decided to make some lobster sliders.
Usually, when I feel like lobster, I just get some of the langostine from Trader Joe's. They aren't quite as good as lobster, but they're delicious and a fraction of the price. But I decided to go all-out for these, so I went to Bristol Farms and bought Maine lobster meat. (The fact that my parents paid for the food made this decision much easier.) I also picked up a container of their Chinese cole slaw.
I chopped up the lobster meat and mixed it with a bit of mayonnaise, some lemon juice, and diced celery. I had some small King's Hawaiian rolls; I brushed butter on them and toasted them in the oven for a couple minutes, just long enough to get them warm. I had some potatoes from Fresh & Easy and I thought homemade potato chips would be good, so I sliced up a couple potatoes, let them soak in water, and dried them. As the oil was heating up I grilled a few pieces of sweet Italian sausage.
I put a piece of butter lettuce on each bun and spooned the lobster into it. The sliders were fantastic; everyone loved them. If lobster were less expensive I would probably eat these two or three times a week.
Posted by JustinM at 11:20 AM

Those look like impressive "sliders." How many did you eat?

Yeah, they were bigger than a regular slider but not as big as a lobster roll. I ate about one and a half. My dad ate two, with avocado on them, too. The ladies only ate one each.

They were so delicious. You are welcome any and every weekend if you make food like this. We finished the salad last night and it was wonderful.