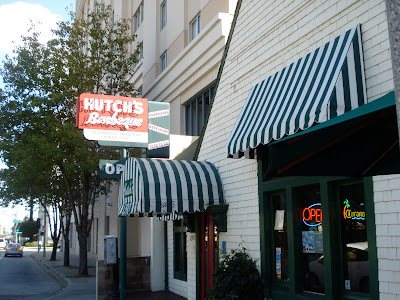 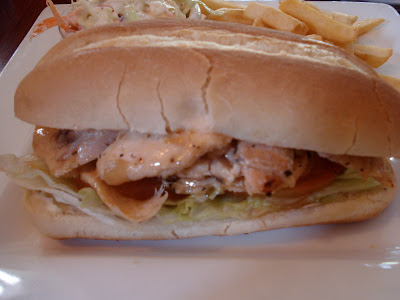 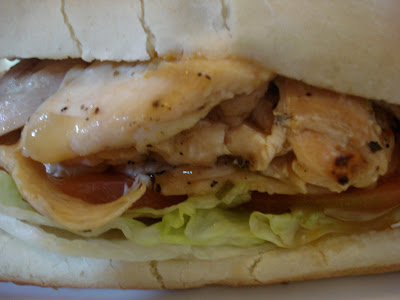 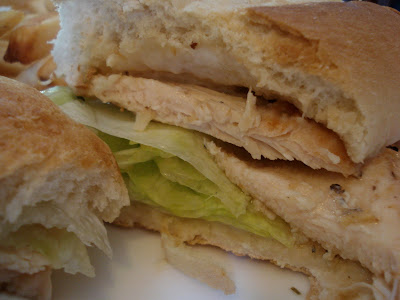 It's very rare that Elizabeth and I get to go out for lunch together on weekdays. She works in Hollywood, and on the rare occasions when we both have the day off, we usually just watch television and be really lazy. Yesterday, though, she got into the kind of car accident that anyone who drives on the freeway sees at least once a day: a woman wasn't paying attention and ran into the back of her car. Once the car was towed to a body shop and Elizabeth made arrangements to work from home for the day, we decided to make the best of the situation and go out to lunch.
I had previously told my mom I would take her to Stats to help her pick up a few Christmas items, so the three of us went to Hutch's. I've written about Hutch's before: although I wouldn't come close to calling it the best restaurant in town, it is possibly my favorite restaurant in the world. There is not a restaurant in town that contains more memories for me; with the obvious exception of a few houses, there may not be any places that hold more memories. My mom asked me if I remembered my first meal at Hutch's. I said no. She said that's because I was six months old.
But from the time I do remember going there (probably nine years old or so) I have ordered the same thing every single time (except one): a hamburger combo with fries and cole slaw. I love their hamburgers - they are probably my favorite in the world. (I am curious how many people who claim Pie n Burger's burgers are the best in Pasadena have actually eaten one of Hutch's. I'm not saying they're wrong - these are only opinions, after all - but I would just be curious to know.)
The one time I ordered something different - a pulled pork sandwich when my brother and I lunched at Hutch's a year ago - I was disappointed. It was a sub-par sandwich and I was upset with myself for not ordering the burger. I decided I would never again make that mistake.
But the last few times I have eaten there, I have been tempted by the Jamaican Jerk Sandwich. I asked the waitress about it and she said it was very popular. A couple times I was deciding between that or the burger right up until the moment that I placed my order. In the end, I always decided that I couldn't give up the burger.
But yesterday I decided to go for the jerk chicken sandwich. Both my mom and Elizabeth were getting burgers (they're either less adventurous than I am or simply much smarter) so I figured I could at least have a bite of one of theirs.
My heart sank a little when the sandwich arrived. It looked, well, boring. A year ago our friend Darin had gotten the regular jerk chicken and it looked gorgeous: dark and spiced and bursting with flavor. This sandwich looked dry and not unlike my Subway chicken sandwich I'd eaten the day before. Luckily, it was not dry, it was juicy. But it wasn't great. The sauce was tasty - although not very spicy - and if I had been served this sandwich at another restaurant I might even be pleased with it. But, predictably, all I could do was look at their burgers and think Damn, I wish I had one of those.
Fortunately (for me, not her) Elizabeth didn't have a huge appetite, she was still a little shaken up. I considered rubbing her shoulders and saying reassuring things to her. But I didnt, I just ate half her hamburger instead. (I'm known as the catch of the county.... Not really, but I try to quote Dirty Dancing whenever possible.) So everything worked out well: I got to try a new sandwich and also eat half of that great burger. I currently have the other half of my Jamaican sandwich sitting in the fridge. I plan to eat it tomorrow for lunch, possibly after I doctor it up a bit.
This was another great trip to Hutch's, but I am pretty sure I'm done deviating from ordering the hamburger.
Posted by JustinM at 9:53 AM

Well, there is not a restaurant in town that contains less memories for me - I've never been! Each time I passed, it seems closed or vacant. I don't sense any life inside as I pass by on the outside.

How does the burger pricing compare: PB v. H?

I like the pulled porker sandwitch at Gus BBq!

They have had some random hours over the years, no question about that! They do much more business during lunch - lots of people from the courthouse or other nearby businesses. Dinner sometimes has that old-man-and-his-dog feel to it.

Leaving aside for a moment that the Hutch's burger by itself is more substantial than Pie n Burger, the Hutch's burger combo is $8 and comes with fries and cole slaw (or your choice of any two sides: beans, veggies, potato salad, etc.) For 9 bucks you can add a second patty to your burger, which I used to do all the time, although the last couple times I tried it that way I found I could barely finish it.

Pie n Burger serves you the burger alone for $6.50. Fries cost you another 3 and a half bucks.

I love Pie n Burger the way I love Kobe Bryant (actually, I don't love either, but you know what I mean): it's great and I appreciate it for what it is. I love Hutch's the way I love Magic Johnson: there may be better, but there will never, ever be another quite like it.

I've walked by Hutches often but never stopped. I should now that I know to order the burgers.