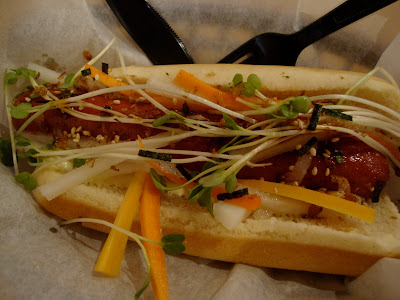 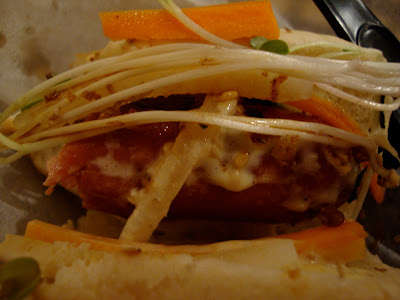 Saturday afternoon I headed up to The Slaw Dogs at the height of the pounding rain. There was no parking in front but the rain had abated slightly so I parked a couple blocks away. You can see the punchline coming: twenty steps from my car the rain started pouring again, the hardest yet of the day.  I did not care at that point, though. I was craving a wiener.
Slaw Dogs was as crowded as I've ever seen it. (Take that with a grain of salt; this was only my fourth visit.) Several of the customers were sipping from beers. I don't know if this means they serve alcohol now - I didn't want any so I didn't inquire. The special dog was the Vancouver Dog: wasabi mayo, pickled carrot and daikon slaw, and nori and bonito flakes. That sounded interesting and excellent so I ordered one. Elizabeth opted to get the Green Monster that I ate last week.
Despite the crowd, it took less than five minutes for our dogs to be ready. The Green Monster was covered with toppings, just as mine had been, and Elizabeth loved it like I had. By contrast, the Vancouver Dog had a relatively sparse amount of toppings. And that's a shame, because the toppings were delicious. I could not taste any wasabi mayo; it wasn't until almost my last bite that I detected a tiny smear of it. It was tasty and I wish there had been more.
Still, I really liked the dog. I have yet to have a dog here that I did not enjoy.
Posted by JustinM at 8:03 AM

Although they have no permit to sell alcohol, they allow customers to bring in beer. the 7-11 on the corner is convenient but won't allow customers to break a 6-pack. So, you're stuck with a tall-boy of limited selections. I did enjoy a 20 oz. Modelo Especial with my Hulk (Green Monster modified with habaneros!!!).

What - were they out of Steel Reserve?

No. I just thought that the Modelo was the appropriate beer for the dog.
I recommend a 40 of Cobra with the Picnic Dog. Something about snake eyes and happy faces...

Saturday afternoon I headed up to The Slaw Dogs at the height of the pounding rain. - I think you've found your favorite restaurant of all times!

I gotta try to get over there in the next day or two.

Went back again, this time to try the original Slaw Dog (#8); the one that inspired these people to say "That's it, we're opening a restaurant"!

Well, I have to tell you, I completely understand their calling. This dog is no dog - a spicy chicken sausage topped with Thai Cole Slaw (peanutty satay dressing) and crumbled peanuts. A strange combo but totally delicious. The texture of the dressing was rich and smooth and the flavors complimented the sausage perfectly.

Raymond claimed that this was a "clean out the refrigerator" stroke of good luck and not a pre-meditated inspiration. A very successful little accident, indeed!

I recommend a crisp lager such as Bitburger or Warsteiner Pils. The higher carbonation creates a crisp tactile feel which is are a good foil for the rich satay dressing and the bracing bitterness offers a refreshing conclusion.

We can't wait to try this place. The photos are making me salivate right now.

Have you seen this other review from one of your fellow bloggers?