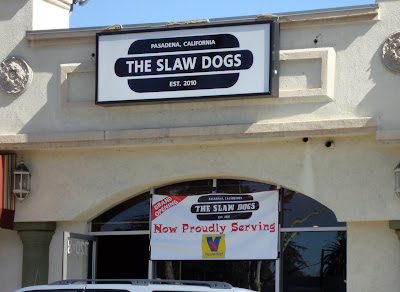 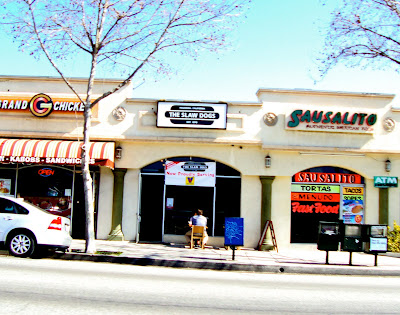 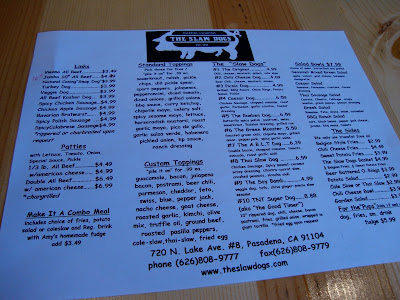 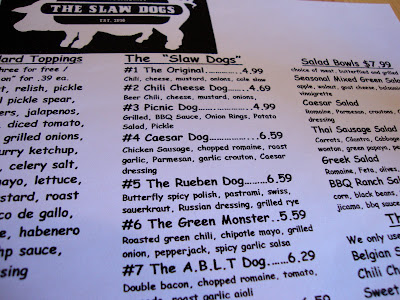 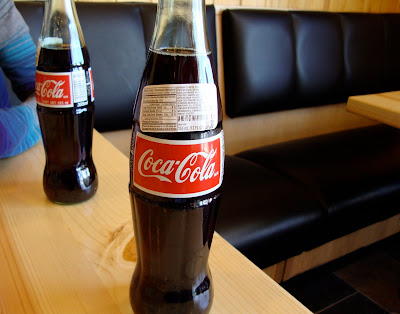 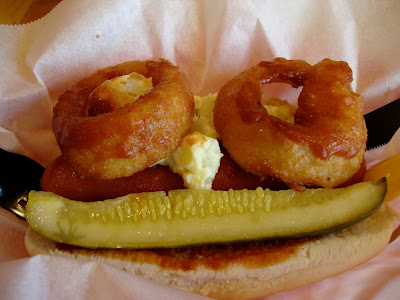 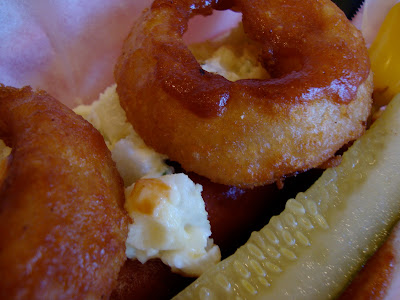 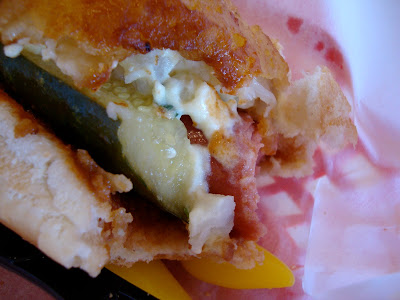 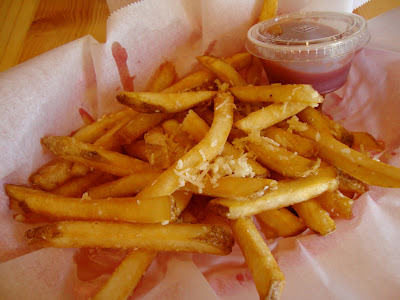 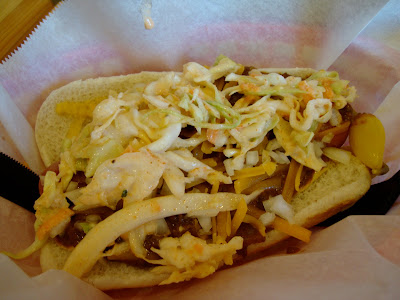 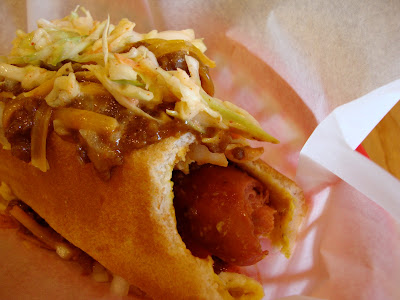 There are very, very few things I like more than a good hot dog. From Lucky Dogs on Bourbon Street to Sabrett dogs on the steps of the Met; from a corn dog the size of a Maglite at the Montana State Fair to a Dodger Dog on a weekday afternoon in Chavez Ravine, I love hot dogs.
For most of my adult life I rarely went north of the 210 Freeway on Lake Ave. Other than the occasional run to Popeye's or the nights when friends wanted to shoot pool at the Rancho, there was never any reason to. But the last few months I've been exploring the area. Cabrera's, The Hat, Perdue's. I noticed there was a Philly Cheesesteak shop just north of Orange Grove but I never felt any need to go there, as I have always been  satisfied with Philly's Best.
But not long ago a joint called The Slaw Dogs opened up in the old cheesesteak location, offering an abundance of hot dogs and toppings. And Belgian fries. I read about it a few weeks ago and filed it away in my mind in the queue of places I wanted to get to, in the category of looks-great-but-don't-need-to-go-immediately. Then last week I got a text from my buddy Tim that he was having lunch there: "Market Dog - today's special: spicy chicken sausage, cumquat chutney, curry catsup, mint grilled onions and pickled habaneros."
Woah. That was a shot to the gut, like the first time I heard Van Morrison or saw City of God. Something new is clearly in play here. Any place that would try to pull off a dog like that immediately earns my affection, regardless of whether it's good. In great attempts it is glorious even to fail.
Elizabeth and I both had Monday off; it was 81 degrees and we were hungry. I suggested The Slaw Dogs and she agreed. The menu is a little overwhelming at first - there are 11 different links from which to choose, ranging from regular beef dogs to Calabrese sausage, and more than three dozen toppings.  We decided to each get one of their special dogs. I ordered the "Picnic Dog," grilled with onion rings, potato salad, pickles and barbecue sauce. Elizabeth went with the #1: chili, cheese, mustard, onions and cole slaw.

"We have a special," the girl behind the counter told us. "Belgian fries with parmesan, garlic, and truffle oil."
"Yes," I said, "we will definitely have some of those."
I also noticed Mexican Cokes in the fridge, those Cokes made with cane sugar instead of high fructose corn syrup. They always taste better that way, but even more so on a warm day. We each ordered one and took a seat to wait.

The food was ready in about ten minutes, my Picnic Dog greeting me almost literally, the onions rings, potato salad and pickle arranged to resemble a face. Too cute by half? Probably. Still kind of funny? Definitely. And it was damn good. I had asked before ordering if those flavors went well together and was told that yes, it actually does taste like a picnic. Which was true.
The fries were fantastic but pretty decadent. I am not sure if I would order them again this way; I could sense my breath the rest of the day as strongly as if I had eaten a container of Zankou garlic sauce. From now on I think I will stick to the regular Belgian fries.
I had a bite of Elizabeth's dog, and it was even better than mine. The chili and cole slaw were great. It's tempting next time to load up a dog with a ton of bizarre condiments, but I think I'm going to make my way through the ten special dogs on the menu before I start making my own creations. Next up for me will be the "Green Monster," with green chili, chipotle mayo, grilled onion, pepperjack cheese and garlic salsa.
I'm hoping this place sticks around for a long time because it's exactly the kind of place I love: non-chain, great service, and an original menu idea.
Posted by JustinM at 10:45 AM

God, I could go for one of those right now.

Smothered in the paté we had last night.

The #1 sounds like it could cure my self-induced brainstem throb. And Mexican Coke? Ole!

This place was fantastic! Love a good hot dog, and these are good hot dogs. I definitely want to try them all.

That's it. I can't take any more. On my way to Slaw Dogs!

I am going to try it soon thanx to these pictures. Looks amazing!

No kidding, I went back intending to go for the #1. On the special board was the following:
"Muffaletta Dog" - Dog of your choice (Raymond, the owner, suggested the Polish spicy)wrapped in Swiss Cheese, topped with olive mix (the muffaletta)and chopped Pastrami. Really? Ok, it was ridiculously good. Also had a side of Thai Slaw which was too mild next to the dog and, of course, Mexican Coke.
My mouth is singing and dancing.
I promised myself that next time I will not to be seduced by the special and go for that #1.
We'll see how that goes...

Chef Hymie Grande (www.chefhymiegrande.com ) is the first and only bottled BBQ sauce to carry the seal of the American Diabetes Association on the label. It has no high fructose corn syrup, no processed sugar, it is all natural and vegan friendly. It is produced at the Rutgers Food Innovation Center in Bridgton, NJ by Jamie Failtelson, a.k.a. Chef Hymie Grande of Carlstadt, NJ. 5% of proceeds go to the American Diabetes Association.

Tflemingo: Hey, if the special looks good, you gotta go for it. You can get a dog with chili and cole slaw at lots of places. But a dog with cumquat chutney and pickled habaneros, or a "Muffaletta dog" are things you have to grab whenever you can.

I ck'd this new joint out last week. Lots of choices. So, I just started with their #9 Soy Bomb, a veggie dog. Not great, but good. Their buns are the weak "link."

Every guy should eat with a girl who likes a big long hot dog.