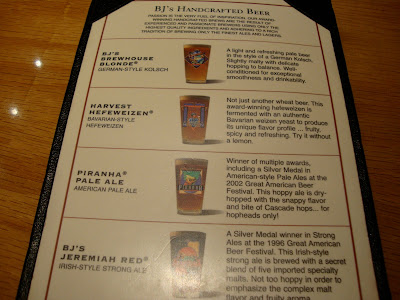 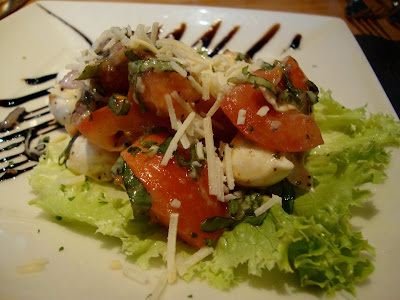 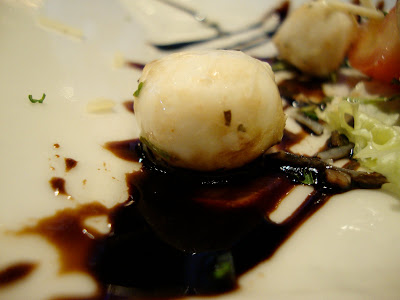 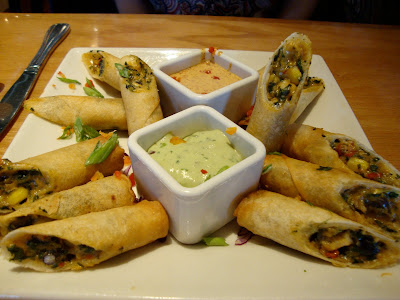 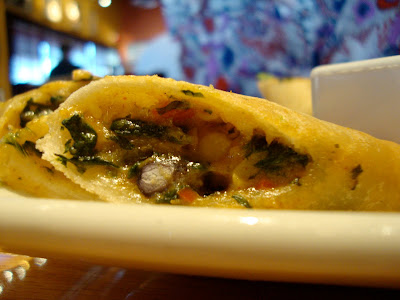 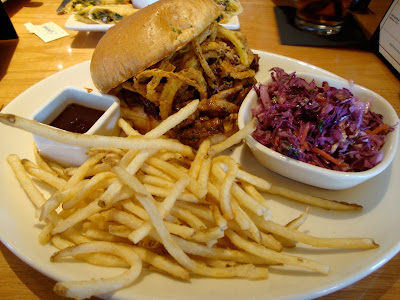 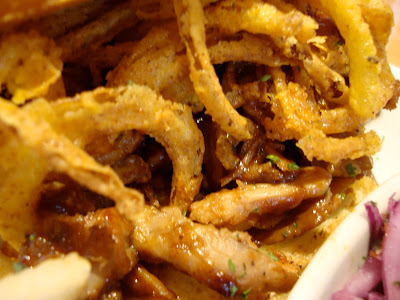 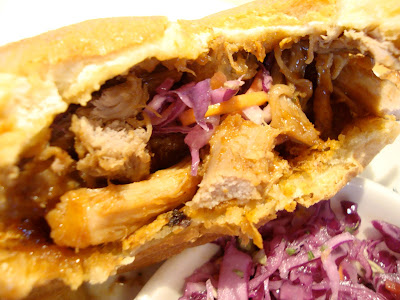 I wrote about BJ's last summer after I had lunch there, which was my first return to a BJ's since the beginning of the decade. While I like the place fine, there is certainly nothing special about it and I did not see any need, after that meal, to ever return. They came out with a pulled pork sandwich a few months ago and my friend Zach tried it and told me he was surprised by it. While I knew it wouldn't be actual barbecue, it sounded good and I made a note that if I ever ate at BJ's again I would try it.
Saturday, Elizabeth and I headed up to Lancaster/Palmdale for the afternoon. We were going to visit the California Poppy Reserve, play some miniature golf, and see a minor league baseball game in the evening. I wasn't sure what our food options were going to be; I don't think I've ever exited the highway in Palmdale.
Not surprisingly for a city that has multiplied in size in the last couple decades, there was the usual collection of shopping centers, all clustered around the same two streets that basically become parking lots on a Saturday afternoon. The same collection of Best Buy/Target/Bed Bath and Beyond/Pet Smart shopping centers that you see in several dozen cities in California these days. We idled at an intersection for a few minutes while people had a difficult time dealing with the whole red-means-stop-green-means-go concept, and from where we sat I could see no fewer than six chain restaurants, none of which I plan to ever eat at again. I was getting hungry, and a couple blocks away we drove by a BJ's, so I suggested we try it. Elizabeth had never been and she agreed.
Other people had the same idea. It was packed and we had to wait for a table. (Given the other nearby restaurant choices, this did not surprise me.) After being seated it took quite a few minutes - and three different servers - just to get a couple iced teas. But at least the wait gave us time to study the menu. The pulled pork sandwich sounded good to me. Elizabeth decided to get two small plates after I promised to have a couple bites: Santa Fe spring rolls and a tomato and mozzarella salad.
Compared to how long we had to wait to get our iced teas, it did not take long for the waiter to appear with the salad. He sat it down in front of Elizabeth and asked "Did you want this first or at the same time as the spring rolls?" This seemed to me an example of closing of the barn door after the horse has gotten out and I let out a small laugh, but the server caught himself and said "Sorry, I guess I should have asked first." At any rate, we didn't care and we dug in. Although I did not try any tomatoes, the cheese was nice and soft and the balsamic glaze - which is something I often find too sweet - was very tasty.
The rest of our food arrived a short while later. I first scarfed down a few shoestring fries. These were just as good as the ones I had last summer. I took a spring roll before I tried the sandwich. They were good. They weren't great and after the egg rolls I ate the previous weekend they seemed awfully bland, but the chicken and peppers were a nice combination and the spicy sauce was indeed spicy.
Zach was right about the sandwich: it was surprisingly good. It is roasted pork, not barbecue by any means, but for what it is, it's good. The cripsy onions are a nice touch and the red cabbage slaw, which was served on the side (although I spooned a lot of it into the sandwich), was tasty. The barbecue sauce was much too sweet for me; I would have preferred something with a vinegar bite to it, but then again it was exactly the kind of sauce I was expecting a place like BJ's to serve, so I was prepared.
We were both pleased with our meal, although neither of us thought it was anything more than slightly better-than-average. I would not recommend anyone go out of their way to try BJ's, but if you find yourself in a similar situation to us, at a shopping mall somewhere in America where your options are BJ's, Olive Garden, Chili's or Red Lobster, I certainly think you should check out BJ's.
Posted by JustinM at 11:20 AM

My first experience with BJ's was just after they came into being in SoCal, nearly 20 years or so ago. They offered Chicago style deep-dish pizza, which was something of a rarity at the time.
The pizza that we were served (the works, naturally) was the tastiest, most luscious and satisfying treat that I had enjoyed for years and for years to come. I still recall the happiness.
Sadly, today's BJ's deep dish remains deep but it is coated with a stingy amount of toppings that makes me crave that first pie.
I would gladly pay extra for a taste of the past glory.
As an aside, the brewery makes mostly some better than average lowest common denominator (LCD) ales that are innocuous but unoffensive. The Jeremiah Red (7.3% ABV) and the Tatonka Stout (8.5% ABV and brewed with additions of brown sugar and molasses in the 18th century style) are exceptions as they actually have some character.

My first BJ's experience was about 14 years ago in Colorado, and I had the same reaction to their deep dish pizza: Wow, this is some good s**t! Then they opened the Arcadia store about a decade ago and, although I liked it, it was not the same as the pizza I'd had years earlier. The cheese was much oilier and the toppings weren't as good.

I agree with you 100% about the beers. They aren't going to be winning major awards but they are more than acceptable. The two you mentioned just happen to be my two favorite. I considered getting the Jeremiah Red, actually, because the BBQ sauce on my pork sandwich is made with it and I thought a pint would be a nice complement, but I decided just to get the iced tea. It's very rare that I have a beer with lunch these days.

I'm a fan of the buffalo chicken pizza sans dressing. For a chain restaurant, their crust, albeit chewy, is not half bad.

That's my favorite pizza as well and, like you, I do not like the dressing. The idea of a side of ranch or blue cheese dressing to dip the pizza into does not appeal to me.

As a rule: if you need to dip a slice of pizza into a sauce, it's probably not a very good pizza.

I don't know about the food but these pictures look good enuf to eat.

I have been tempted to try the BJ's here in Palmdale but I really dont like going to chains if I can avoid it, I do love beer though. I am a little ashamed to admit that my bf and I went to Famous Daves and were happy with what we got considering it's a chain.

If you are ever up in the area there is a decent sushi place for another option that gives you an assorted dinner plate for great bang for your buck...plus they had yellowtail collar there and I dont see it to often but love it.

We actually went to a pretty good sushi place in Studio City if you are not to far from there I can give you the name, if you like spicy tuna then you will like how this place does it.

I will be going to the Poppy Festival tomorrow, I hope they have some good "street meat" stands.

I've been to Famous Dave's a few times and usually been very happy with it. As you point out, considering it's a chain, it's good.

BJ's is pretty good, too. Much better than comparable chains. I'm not going to say you're missing anything if you don't go, I'm just saying if you're ever at that mall and need food, go to BJ's before you go to Red Lobster or Outback.

I try not to ever go to the San Fernando Valley if I don't have to, so I will not be going to Studio City for sushi, but thanks for the offer.

definitely enjoy BJ's more than other chains. Eager to try their pizookies!