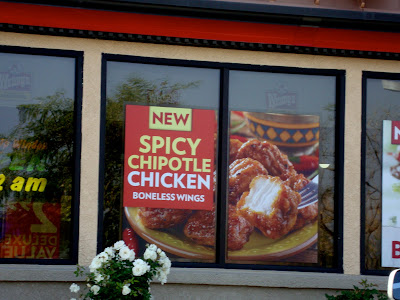 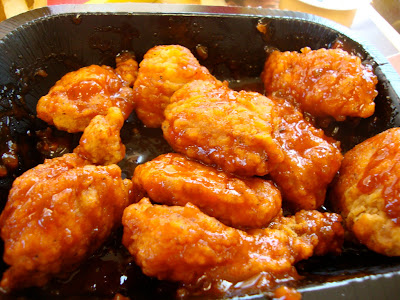 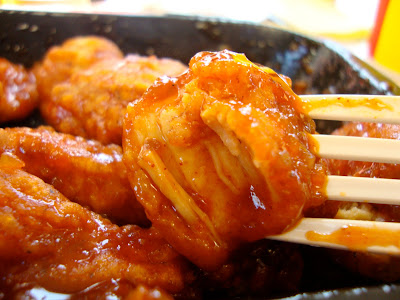 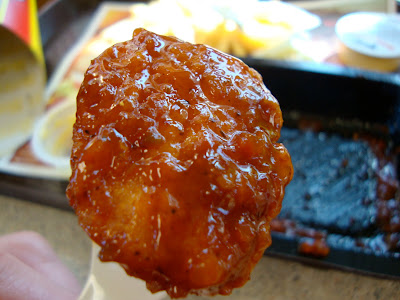 Two weeks ago, when writing about the Del Taco Santa Fe Chicken Taco, I mentioned what a sucker I am for any promotion containing the words chipotle, boneless or whiskey. Sunday, Elizabeth and I were up in Burbank at the Empire shopping center, which will no doubt serve as a model of poor parking lot planning for generations to come. The lack of entrances/exits - combined with the large number of drivers who are too stupid to understand how a four-way stop works - can make parking here a nightmare.
But we were going to the massive Target Greatland, looking for something specific on sale (a set of sheets, to be precise) so I was willing to deal with the hassle. Driving through the lot I spotted a sign in the window of the Wendy's in the parking lot, advertising "New Spicy Chipotle Chicken Boneless Wings." I would have jammed on the brakes and immediately pulled the car over, but I probably would have been rear-ended by the woman in the SUV behind me, chatting away on her cell phone. So I somewhat cautiously found a space.
I stood in front of a vacant register for several minutes while no one acknowledged me. That annoyed me. I understand working at a chain fast food joint probably isn't the most exciting job in the world, but how hard is it to crack a smile at a customer or say "I'll be with you soon"? After a few minutes I gave my order. The food was ready is about two minutes - less than half the time it took me to order it.
I opened the container at the table and was immediately hit with the pungent aroma of the chipotle peppers. It was strong. Far too often, foods that co-opt the word "chipotle" are betrayed by their smell and taste; they taste like standard hot sauce and nothing like chipotle. Anyone who has ever opened a can of chipotles knows the unmistakable scent. And that's what these smelled like.
I took a bite. First, the bad part: the chicken sucked. It was neither crispy nor tender. It was an almost-rubbery chicken that tasted like it had been fried hours earlier and left under a heat lamp. The sauce, however, was surprisingly good. It was much spicier than I expected (again, I have been conditioned to expect that any fast food item describing itself as spicy is most likely not) and the flavor of chipotles was pretty strong. I wish the chicken had been better.
Although I'm not sure if I will ever order these again, they are by far my favorite of the four flavors of boneless wings Wendy's has released in the last year. Now, if they would just get on those whiskey wings....
Posted by JustinM at 1:13 PM

Your pics come out looking more like orange chick.

whenever i order these, the chicken tastes good and its real chicken. its one of my favorite fast food items
id recommend you try it again somewhere else

That's not a bad idea - I've always liked Wendy's nuggets and especially the spicy version. My thing is that I usually just get those, but maybe I should give the boneless wings another try... although I've tried all four versions of them, and none have been as good as the other Wendy's chicken products.