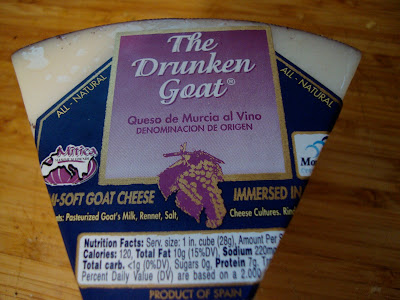 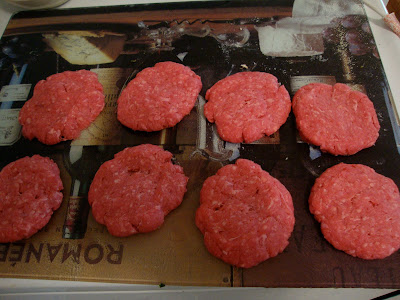 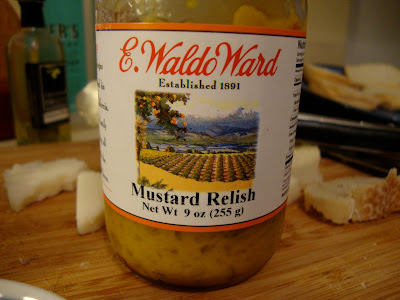 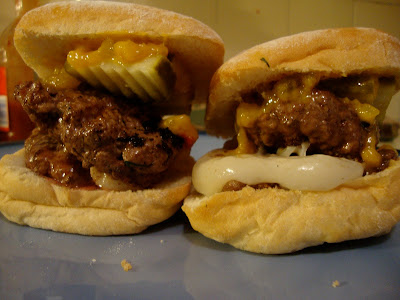 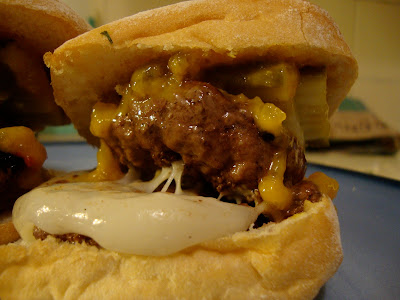 I first tried Drunken Goat four years ago, based on a recommendation at the legendary Murray's Cheese Shop in New York City. The guy in the store told me an obviously apocryphal story about how Drunken Goat was invented, supposedly by somebody dropping a wheel of cheese into a vat of wine and forgetting about it. I'm not even sure the guy believed the story himself. At any rate, the cheese is indeed a goat cheese that has been submerged in red wine (Mourvedre grapes) for 48-72 hours. It develops a purplish rind and is semi-soft and sweet as candy.
There is almost nothing that isn't improved with Drunken Goat. I often put it in quesadillas or top pizzas with a few thin slices. Some crostini with Drunken Goat is an excellent appetizer; add some chorizo and a glass of Temperanillo and it's a meal in itself.
I decided to make sliders with Drunken Goat. I got some small potato rolls from Bristol Farms, which have become the only acceptable choice for making sliders these days, and some patties from Trader Joe's. This time, I smashed the patties down and grilled them for a few minutes, then stuck a slice of Drunken Goat between two patties and cooked them for a couple minutes more, just enough to melt the cheese.
I wanted some kind of condiment with a bit of tang to play against the smoothness of the cheese. E. Waldo Ward's mustard relish fit the bill perfectly. E. Waldo Ward's products have the trifecta I love most about foods: they are delicious, they have been made locally for over 100 years, and Huell Howser has featured them. You could not ask for anything more.
The mustard relish has mustard and pickles, obviously, but also a little horseradish and pickled watermelon rind. After I took the patties off the grill and placed them on the buns, I added a slice of pickle to each and topped it with a dollop of the mustard relish. They were, without question, my favorite sliders I have ever made.
Posted by JustinM at 10:41 AM

You couldn't resist the Huell, eh?

EVERYONE loves the Huell. Except Elizabeth. And my mom. Actually, now that I think about it, most people I know don't love him. Whatever, I do and it's my blog.

We love Huell Howser, and these sliders look so delicious that The Two Guys may just throw cholesterol concerns into the wind (damn them anyway!) and try out a few!

Huell is corny, he doesn't always pay attention, and if he didn't repeat every single thing the interviewee said the episodes would be about 40% shorter... but he is honest, enthusiastic, and one of a kind. That makes him better than about 99% of what is currently on television. As he himself has said, in the land of the blind, the one-eyed man is king.

Great sliders, where did you get the cheese from? Does Trader Joe's have it as well, I just went there the other day and picked up some irish inspired cheese that had oats and raisins...I have to say I am a fan!

I have been wanting to make since watching the Travel Channel a Juicy Lucy....maybe you should try giving that a whirl if you haven't already.

You know, I'm not sure if they have it at Trader Joe's. They definitely do at Fresh & Easy. I don't know if there is one of those on your side of the mountains, though.

I have made a Juicy Lucy before, years ago, long before I started the blog.