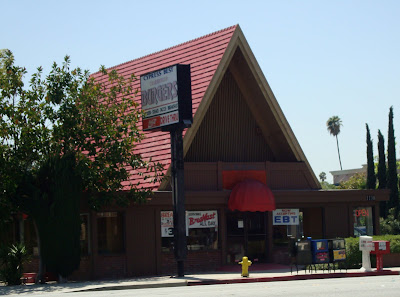 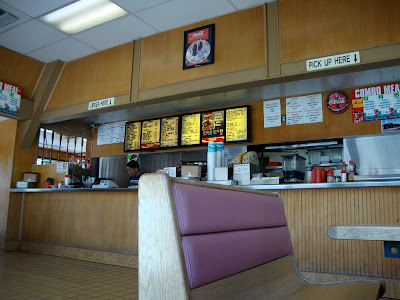 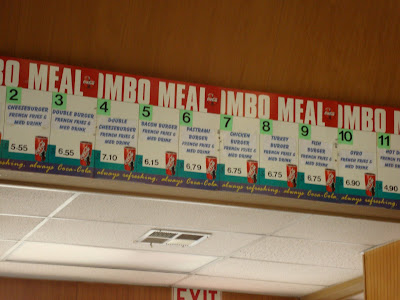 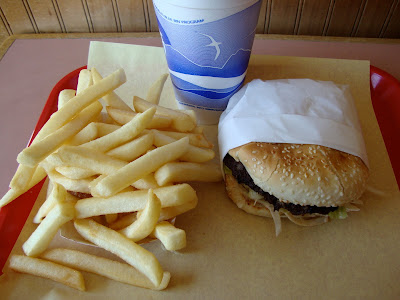 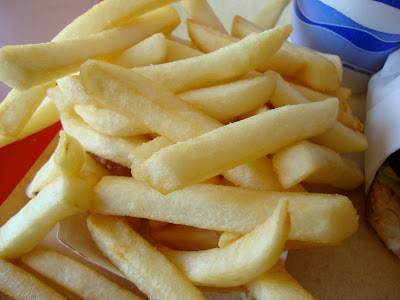 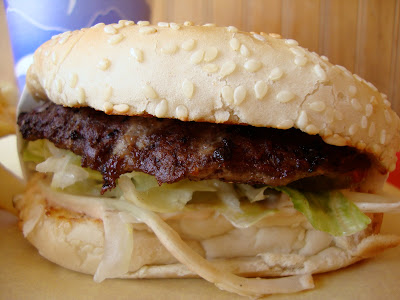 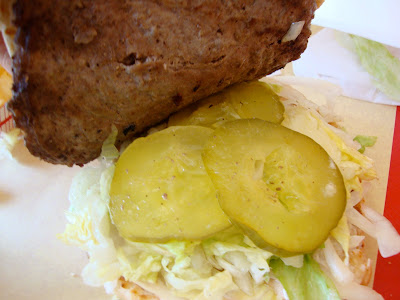 For years I've driven past Cypress Best Burgers, on the corner of Walnut and Mar Vista, and never thought twice about it. I have no idea when it opened, I have never heard a single friend of mine mention it, and I very well might have never even considered eating there. But then, a couple weeks ago, I ate at Connal's for the first time and really liked it. That got me wondering what other hole-in-the-wall joints I might have been missing out on all these years. I figured I should give Cypress Best a try.
It was almost empty when I walked in, just after noon. This did not seem like a good sign. Connal's, Rick's, and even Lucky Boy are always crowded at lunch. I ordered the #1 combo - they have about a dozen of them - of a hamburger, fries and a drink. The total was $5.70, certainly a reasonable amount as long as the food wasn't terrible.
I took a seat and waited a few minutes. I received my food and it looked exactly like what I was expecting: a generous helping of fries and a not-terribly-fresh looking burger. The fries were disappointing. They are the same fries you get at most burger stands. This can go one of two ways: they can be cooked long enough so that they're hot and crispy and dusted with a touch of salt (Rick's are almost always done well) or they can be undercooked and drowned in salt so that they are limp and not tasty (which is what I have been served at Lucky Boy every time except one.)
These fries set a new standard for undercooked. Their centers were actually cool. If the place had been packed and they were just trying to crank out orders, I would have understood. Not accepted, but understood. But there were two other people in the whole place. How hard is it to cook frozen fries until they're no longer cool in the center?
The burger was okay. Not particularly good, and it was unnecessarily loaded with lettuce and a Thousand Island-like dressing, both of which squirted out of the burger with each bite, but I ate the whole thing and was content. If you left a Rick's burger in the fridge overnight then microwaved it the next day, I imagine it would taste similar to this.
When I first noticed all the combos, before I ordered my food, I thought If this is good, I will definitely come back and try the pastrami sandwich and shrimp combos. I do not plan to go back. Their prices are good, but so are many places around town that serve much better food than this.
Posted by JustinM at 9:09 AM

So, WTF does IMBO MEAL mean?

These are some of the most unappetizing pictures I've seen posted on your blog.
And does that sign say that they take EBT cards? Talk about abusing the system.

I just commented on your chicken little post!! ... I can't stop thinking about those little sammies.. and how I wish I had one right now!! ha ha ha ha.. I'm crazy. :)

That's definitely one of the most popular posts I have ever done. It's more than a year old and people are still commenting on it! I think a lot of people in their 20s and 30s have fond memories of eating them when we were kids.

Btw, if you think maybe breakfast is done better, then you haven't ck'd out my meal review from last year.