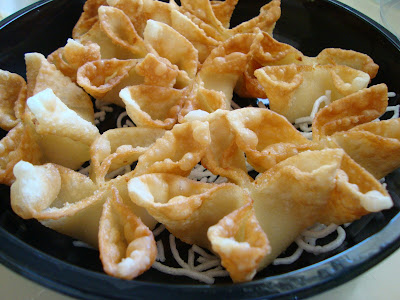 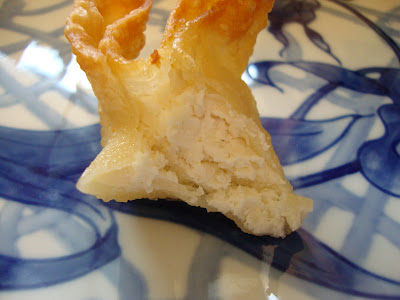 Everyone likes a good deal, right? I'm going to keep this brief today and write about a few good deals I've gotten in the last couple days.

Elizabeth loves the cream cheese wontons at Pick Up Stix. Every time we go there we get an order, sometimes two. I think they're good, although a bit plain. But I still eat some every time. They're not a particularly good value - an order of six is almost $5. (I once made them at home and $8 in groceries yielded about 30 wontons.) But on Wednesdays they are 25 cents each, so every once in a while I pick some up for dinner. Wednesday evening, I got 20 wontons, and we ate them all for dinner. 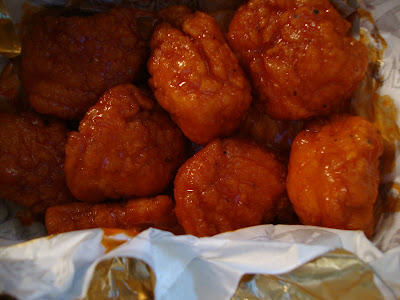 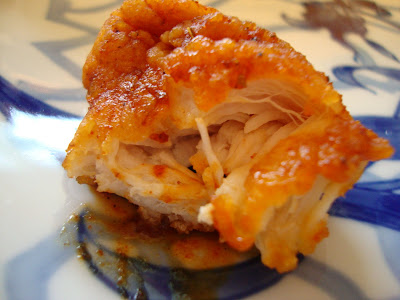 A few weeks ago I wrote about trying WingStreet on a Wednesday for some of their 50 cents wings. They were nothing special and I concluded that, while I would never pay full price for them, I might go back on a Wednesday and try a different flavor. Thinking that I might want something besides cream cheese wontons for dinner, and craving something spicy, I went by WingStreet after Pick Up Stix and got an order of 8 boneless wings in the hottest flavor, "Burnin' Hot."

I was disappointed in the wings. I did not think they were very spicy. Of course, Elizabeth tried one and she thought it was incredibly spicy. Maybe I have just killed my taste buds with all the spicy food I have eaten over the years and eventually I'll be one of those guys who has to dump half a bottle of hot sauce onto everything just to give it some flavor. 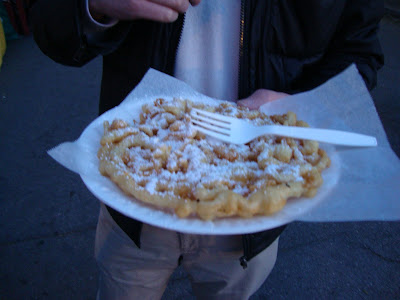 Last night I went to the South Pas farmers market with a few friends. My buddy Murph got himself a funnel cake (I think it was $4) and shared it with all of us. It was very tasty although pretty decadent. There were six of us nibbling on it and we still couldn't finish the thing. Murph said he would just throw the rest away. (Later in the evening I got a text that he couldn't find a trash can on the walk to his car so he had to eat the whole thing and he had a sugar buzz. They broke the mold when they made him.) 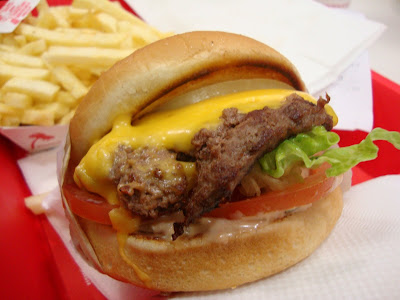 And, of course, what could be a better deal than free? Last week I volunteered at a charity event that my mom had a big hand in planning. My dad was there, and to thank me he bought me a bunch of raffle tickets. The one thing I won was basket full of vouchers for a free burger/fries/drink at In-N-Out. After the farmers market, Elizabeth and I and our friends Tracie and Carla headed down to In-N-Out for dinner.
-
You could select any burger and drink off the menu, so I got myself a Double Double and a vanilla milk shake to go with my fries. It was, not surprisingly, fantastic.

What could be better than Farmer's Market snacks and then In-N-Out? A great evening!

My birthday tradition is (and has been for many years) an In-N-Out Double Double and a bottle of really good, 10 year old Napa Cab. Part of the Creator's plan!

That is the exact attitude I want this blog to be about.