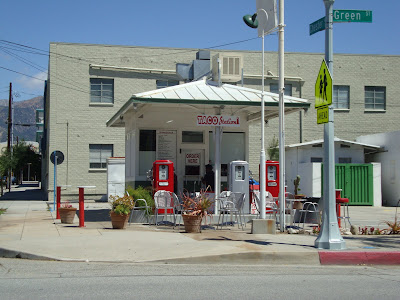 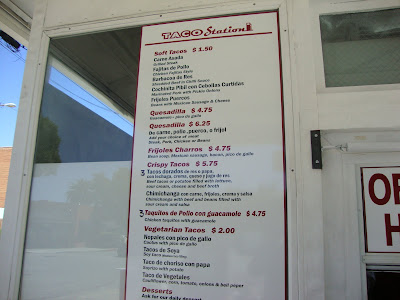 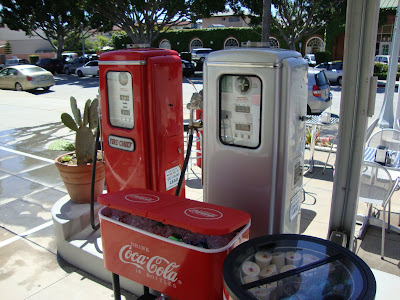 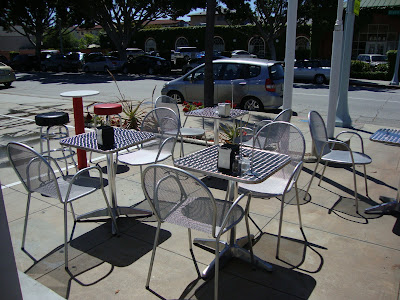 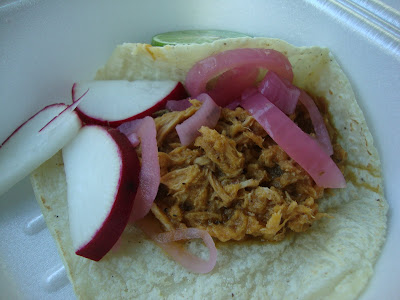 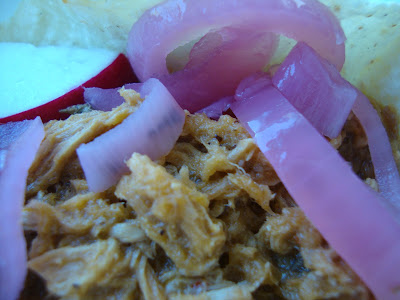 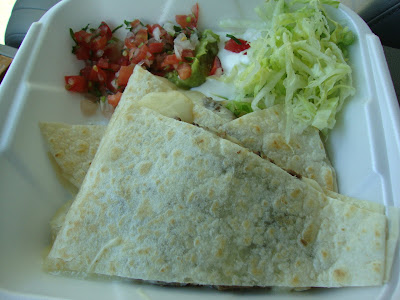 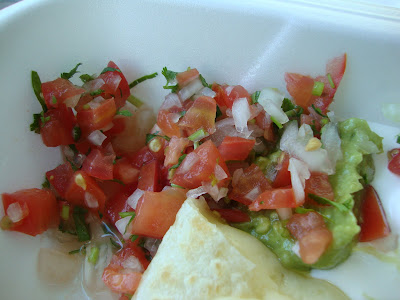 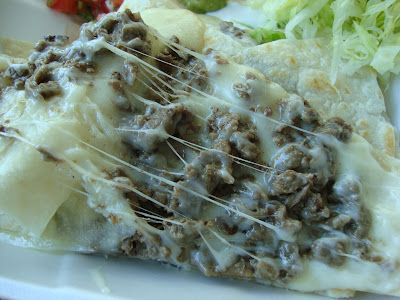 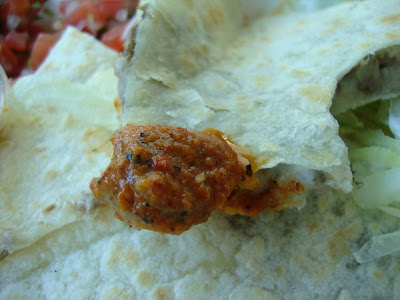 Back in late 2003, over beers one night, my friend Hatcher told me about a taco stand Jonathan Gold had recently praised, comparing it to the legendary La Super-Rica in Santa Barbara. Statements like that are always going to get my attention. The new place was called Las Ruinas and it was down by PCC. Excitedly, I drove by that night and noticed the tiny structure - literally a shack on the corner of Green and Chester. It looked like the kind of place I would love. Unfortunately, I worked six days a week back then and the chances of me trying it were slim; their hours weren't absolute and as I recall they were only open a few hours in the middle of the day, and never on Sundays, which was the only day I had off.
-
Fortunately, a few months later, I was taking a notary class and exam all day on a Saturday at PCC. During the lunch break I walked the couple blocks to Las Ruinas. With so many expectations it seemed inevitable that the place would fall short. But it did not. It was one of the best meals I have ever had in Pasadena. Alas, by the time my scheduled changed and I had the whole weekend off, Las Ruinas had closed for good.
-
I thought about it many times over the years, almost always when I drove by the abandoned shack. Then my friend Tim sent me an email this morning with a link, asking if I had tried a new place called Taco Station. I opened the link and the shock of recognition was strong: it is in the former space of Las Ruinas. I decided I needed to try the place. Not someday, not when the weather gets warmer, and not even when Elizabeth got home from work. No, I needed to try it within the hour.
-
Taco Station is nicer-looking than Las Ruinas was - not that that would have been hard to accomplish - with several low tables, stools, and a few high tables scattered around. The gas pumps are shiny with new paint and the coolers full of soda and dessert are an awesome touch. If I were to open a taco stand - which would be perhaps one of the worst ideas ever - I would want it to look like this.
-
I ordered a cochinita pibil taco (marinated, roasted pork with pickled vegetables) and a steak quesadilla. The total for both was $8.51. The food was ready in just a few minutes; I'm pretty sure I was only the second customer of the day. I considered sitting at one of the tables but the wind was blowing pretty hard, so I took the food to my car.
-
I opened the taco first and was hit with the nicest aroma I have experienced in quite a while. I looked at it longingly for a couple minutes. It was almost too nice to eat. But I did, and it was the tastiest thing I have had in a long time. The pork melted in my mouth, the sweetness of it beautifully balanced by the pickled onions. I thought Damn, maybe I should go get three more of these to eat now and save the quesadilla for dinner. But by that time there were a few more people in line and I was really hungry, so I did not.
-
There was no way the steak quesadilla could live up to the taco, and it did not, but damn if it didn't come close. The steak was tender and there was lots of it. When I ordered it, I was expecting a thin, easy-on-the-meat quesadilla, and I thought $6.25 was a little steep. But it turns out it's actually a bargain. There were five thick wedges of quesadilla. Two light eaters could easily split one of these for lunch. It wasn't until I was halfway done with the quesadilla and I reached into the bag for a napkin that I realized they had included salsa. So I tried some of it on my last piece: it was the best salsa I have had in a long time, both spicy and flavorful. Most salsas achieve one of the two, but rarely both.
-
I loved Taco Station. They were very friendly, the prices are reasonable, and most importantly, the food was delicious. Unlike Las Ruinas, which was cash only, they take all credit cards. And unlike the hours at Las Ruinas, Taco Station is open 11-9 Monday through Saturday and even open 11-6 on Sundays.
-
I am already thinking about sitting out on the patio in the summertime, enjoying taco after taco. Undoubtedly the place will be popular and very busy by then, but I don't mind. This is not a chain, it's the longtime dream of the woman who owns the place. It has been years since I've seen a business in this town that I want to succeed as much as I do Taco Station.
Posted by JustinM at 2:46 PM

I promise I will try it soon!

Is it wrong that I tried to lick the quesadilla pic on my computer screen?

Is that place as tiny as it looks in the first picture? Where do they put all of the chairs and stuff at night? I can't imagine they'd leave them out - someone would steal them!

I hope you're not BSing us with praise & hallelujah's for this taco joint, Pulled Porkr, cuz I'm mite try it 2nite! (I looked at it longingly for a couple minutes. It was almost too nice to eat!) Wow, this is gonna make your wife jealous with envy.

It's been vacant for a couple of years. Only the ruins were left to sea. It was another short-lived food joint after Las Ruinas but I never went - do you remember what it was?

Sounds like it's made you 4get about the Slaw Dog already!

It's not yet 7:am and I'm sitting here salivating at the thought of Yucatan pickled onions. Please, 5 o'clock come soon...

Diana: Yeah, it's tiny, maybe 10 feet by 8 feet. I think there is some storage on the lot, but to be honest I have no idea what they do with the stuff.

Cafe: It was outstanding. I'm not saying it was as good as Las Ruinas but I still loved it. BTW I do not have a wife! (But I do have a girl who is even more beautiful than my taco was. Slightly.)

Tflemingo: We've talked about the sorry state of Mexican restaurants in Pasadena before. This is better than any of the well-known ones.

Pulled Porker: sorry, well, then does Elizabeth have a husband??

I did go yesterday: I told the owner I wood be back. But, it never occurred to me to want to longingly look at their food.

Have you tried El Metate down the alley from T.Boyles bar?

Nope, no husband for Elizabeth. At least none that I know of.

Yes, I've been to El Metate once or twice and Amigo's a few times. I like those places. Mexican food is not one of my favorite cuisines, but I will gladly go to either of those places if invited, unlike El Cholo, Mijare's, or a couple of other restaurants I do not like that I tend to get invited to much more frequently.

Oh, by the way, Cafe, I will never forget about Slaw Dogs. But I don't think they're in danger of going out of business anytime soon. Often when I drive by the line is out the door. They're really good, but, in my opinion, not so good that I need to devote 45 minutes to getting a hot dog and Mexican Coke, you know what I mean?

Funny you mention El Taquito. A friend of mine who introduced me to it, & I, were talking. I told her about Taco St. She asked my opinion & I said based on this single meal at TSt, I still preferred EL T.

I'm waiting for her to try TacoSt. since she often passes it.

I have no problem with that. If you were to say you liked the Pasadena El Cholo more than Taco Station, I would be a little leery of you. But El Taquito is some damn good stuff. If I could only choose one for the rest of my life, I would probably have to choose El Taquito: it's stood the test of time. Taco Station is brand new and that may explain my enthusiasm for the place.

Dood, just got back from Taco Station for lunch. I got one asada taco and one cochinita pibil taco. I'm one happy person right about now.

I tried it today, too. I liked everything but the pork was my favorite by FAR.