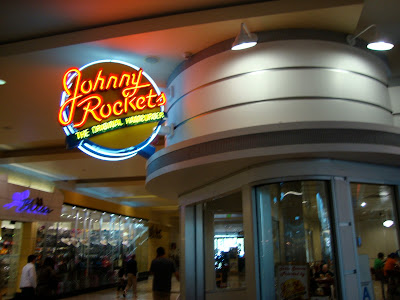 Ah, the mall on a December weekend. One of the things I loathe in life, but shopping needs to be done. Originally we'd planned to do it on Saturday, but then the day came and it was too nice outside to spend the day in the mall. We put it off 'til the next day.

Of course, Sunday was even nicer, but by then we had to go. There were specific stores Elizabeth wanted to go to that all happened to be in the Arcadia mall. I dislike parking at almost all malls, but that one is particularly bad on a busy day. My parents live only a couple miles away, so we drove to their house and asked my dad (and the dog) to take us to the mall.

"I can't believe we're having your parents drop us off at the mall," Elizabeth said.

It was very busy, not surprisingly, and it took us a couple hours to get our shopping done. We were both very hungry. I've never been a fan of the food court at this mall, and I wasn't in the mood for any of the sit-down options like Wood Ranch or CPK (which were packed) or Cheesecake Factory (which I don't like). Johnny Rockets was busy, too, but it seemed like the best balance between the fast food stands or the restaurants.

"You know," I added, "the CEO of Johnny Rockets is on Undercover Boss tonight."

"Excellent!" Elizabeth added. "Then we should eat there and we can watch it and offer informed opinions."

That was a completely dorky and absurd thing for her to say.

And I don't believe I have ever loved her more than at that moment. 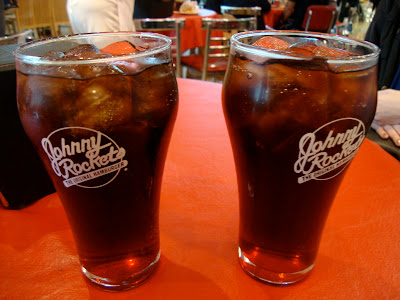 So we took seats at a table and ordered two Cherry Cokes. I have eaten at Johnny Rockets a few times over the years and never had a bad meal, but then again I don't believe I've ever had a particularly good one. It is what it is: burgers, fries and shakes, nothing too challenging. Elizabeth ordered the "Rocket Single," their basic burger, but I wanted something a little different. I considered the mini chili cheese dogs but thought they might not be filling enough. I considered adding some fries to that, but I've never been a big fan of their fries and didn't feel like getting an entire order of them. So I ordered a patty melt - a patty with grilled onions and two cheeses on grilled rye bread. 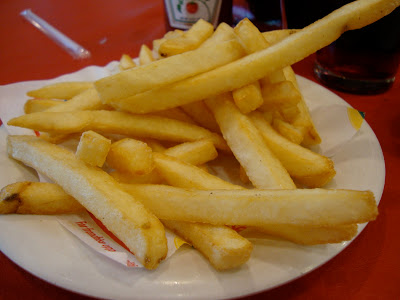 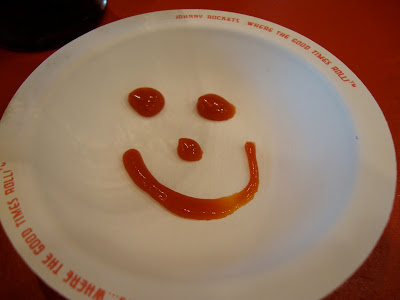 All burgers come with fries, which were brought out to us well in advance of our burgers, accompanied by plates adorned with ketchup drops in the shape of a happy face.

"Obviously this ketchup hasn't been shopping in the mall today," I said with a certain degree of smart ass.

But then the burgers didn't come out for at least 15 or 20 minutes. I said I'm not a big fan of their fries, but I was very hungry at this point, so we both started chowing down on them. 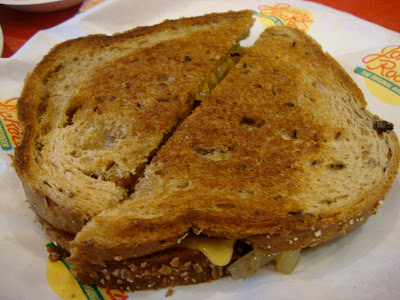 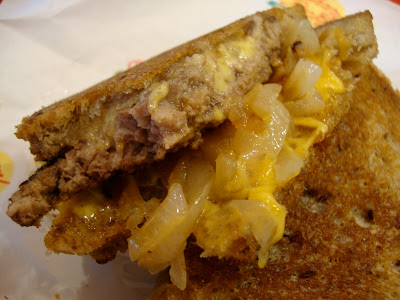 My patty melt was exactly what I expected - nothing special, nothing I couldn't do at home in less than ten minutes - but it hit the spot. (To be fair, after watching Undercover Boss, it's obvious that's what they're going for: decent, fast food in a fun environment.) I ate all of it but the last couple bites. 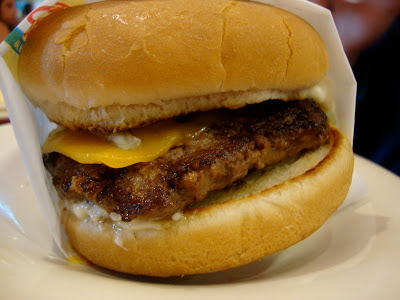 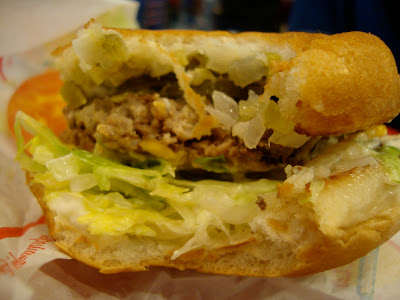 Elizabeth doesn't have the appetite that I do, though, and she was also full from the fries. She only took a couple bites of her burger before she was full. But a half-hour later, back at my parents' house (yes, after I called them and asked "Can you pick us up from the mall?") my dad ate the whole burger. So it didn't go to waste.

It was a good meal at Johnny Rockets. I doubt I will ever again seek out a meal at Johnny's, but it would not suprise me if one day I eat there again in a situation similar to this, and I will be more than okay with that.
Posted by JustinM at 10:48 AM

Nosh: Nope, not for me. I will eat mushrooms with some things if I have to, but cheese and french fries are not one of them.

Anna: Funny you mention Sizzler after someone mentioned La Grande Orange in the comments yesterday...

Even if I don't like a place, I still can usually find a few nice things to say about it. If I can't, I won't write about it. The only two Pasadena restaurants at which I have taken pictures in the last few years that I won't post about because I cannot find a single nice thing to say about them? La Grande Orange and Sizzler!

What's wrong with Cheesecake? They might not be the best, but most of their food is locally sourced and they have some pretty creative options. Their Saigon Chicken Sandwich, which I tried the other day, was actually pretty spectacular.... Charbroiled Lemongrass Chicken, Marinated Cucumbers, Carrots, Onion, Chiles and Cilantro on a French Baguette with Shallot Mayonnaise. Their Miso Salmon and Steak Diane are both also excellent.

Loved this review, though!

Cheesecake tastes to me like Denny's food at twice the price and three times the wait. Though I must admit I've never had the Saigon chicken sandwich, that sounds pretty good.

I've had the Cuban sandwich, pulled pork sandwich, orange chicken, Caesar salad, buffalo wings, crab cakes, fried shrimp, and probably a few other things, and I can't think of a single one that was memorable.

I will go there when someone else wants to and there isn't a wait, but I will never go there on my own. And, as for the 1-2 hour waits at the Old Pasadena location? No way.

I really like Johnny Rockets. And I wish I had felt better and eaten my burger, but the mall was just so "off" temperature wise. Ugh.

I can never finish a plate of fries and a burger like that! the smiley ketchup face is a cute touch, perhaps to uplift your mood with shopping? hehe

Thank you for the heads up about the "pulsion" giveaway! I already entered! :)

Well, I was pretty hungry. If we'd been shopping for another 30 minutes I probably could have eaten two burgers...