Shrimp (or Prawns) for Emily 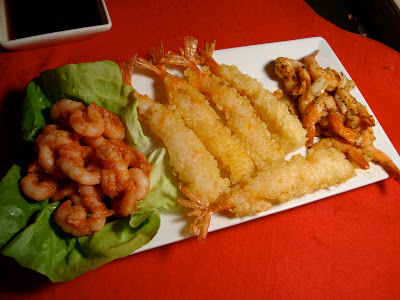 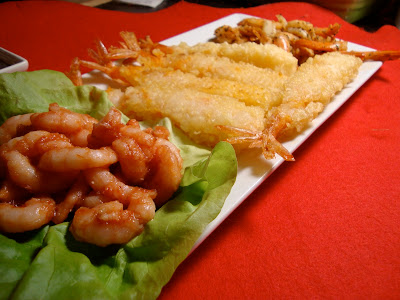 Last month, when I asked for ideas as to what I should do for my 500th post, a reader in the UK named Emily suggested I cook a big dinner. When I decided to go out for tacos instead, I promised I would make a dinner and dedicate it to her, and I asked what she would like to see. She said shrimp (or what people on that side of the Atlantic call "prawns.") 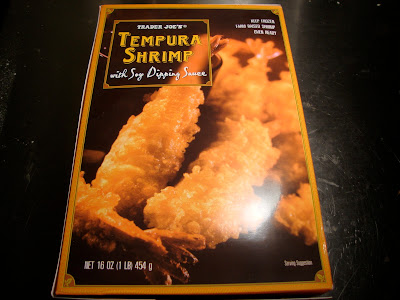 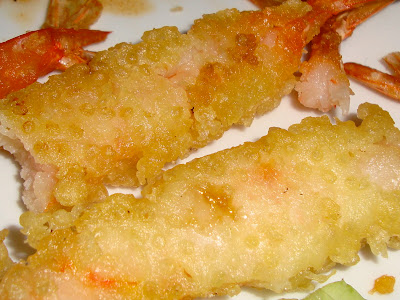 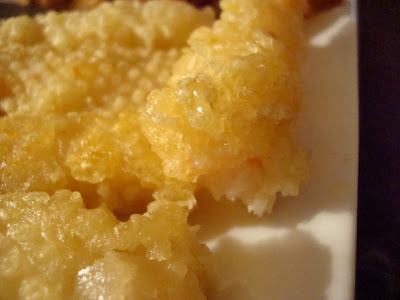 I have written about Trader Joe's tempura shrimp before: they come ten to a box, cook up in the oven in less than twenty minutes, and are just as good as the tempura shrimp you are served at lots of Japanese restaurants. Sometimes I eat these with rice and nothing else and it's a great meal, but on this occasion it only formed one-third of my dinner. 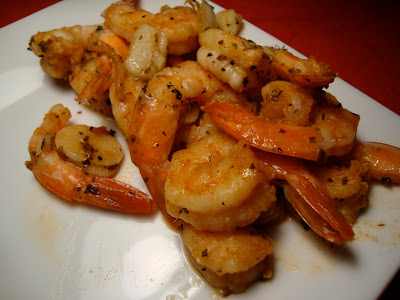 I had some shrimp in the freezer. After defrosting them, I sauteed two thinly-sliced cloves of garlic in a pan with butter for a few minutes over low heat. I added the shrimp, turned up the heat, and cooked them for a couple minutes, adding paprika, salt, pepper and dried basil. They were wonderful: buttery, slightly spiced, and melt-on-the-tongue good. 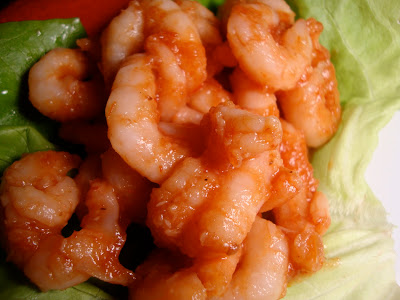 Although I've never been a big fan of the seafood at Taylor's Prime Meats (no big deal - it's one of the best butcher shops around, not a seafood shop) they have frozen bay shrimp that are outstanding. I defrosted them with just a few minutes of running warm water and patted them dry. In a bowl I mixed chil sauce, a few squirts of lemon juice, and a healthy amount of "Atomic" horseradish. (I like my cocktail sauce sinus-clearingly spicy) before dumping in the shrimp. This was my favorite of the three kinds of shrimp.

Overall, this was an excellent meal. Good call, Emily. I think I need to start taking recommendations from people more often.
Posted by JustinM at 9:21 AM

Yay! Thank you :) The garlic prawns looked especially good. It was certainly worth waiting for! And it was also a refreshing break from my mountains of revision.

Emily, will you leave the nice man alone now?

I think you inspired me to grab the frozen bag of TJ shrimp I have in my freezer and follow your directions. That will have to wait for Wednesday since tomorrow I will be making pork loin. :)

And in turn, that reminded me I have a pork loin in the freezer! How handy :)

I just came across this again, what fun it was.

Would you like another shr- er, prawns post? With different kinds of prawns? And pictures with my new camera? Anything for my English rose.

Hey, I never saw that you replied to this! How rude you must have thought me.

I like the Trader Joes frozen tempura (baked), 10 to a box. Mix the dipping sauce with as much wasabe as you want. Eat the tempura alone, or with Japanese short grain rice and a sweetish cole slaw-type salad. Unless you have great, inexpensive Japanese restaurants in your area (I dont), its as good as restaurant food, and and a bit cheaper at $7.99 USD.

You know, I still tell people that I had a blog post written for me. I showed it to my my boyfriend just the other day and he said 'what a cool coincidence!'. It took a long time to convince him that 'Emily' actually is me.

(I don't know if you still moderate comments but if you do, hello! I miss your blog.)

Why hello, Emily. I don't get that many comments anymore, maybe only a few per month, and often I don't even publish them. Hope everything is well with you. Did you finish school? Where are you living now?

Also, don't forget the Prawns Spectacular I did in Novemeber of 2012... that was even better.

Well of course! That was the one that he didn't believe, and I had to show him the original.

I graduated last year! I got a 2:1 (do you have those in america?) and celebrated by going to New Orleans. I am now living in Dundee, which is not very pleasant, but I am living with the aforementioned boyfriend, who is excellent. I got sick maybe 18 months ago - long-term sick, like a Victorian invalid - and I'm just trying to not get any worse at the moment. BUT this does mean that I am cooking lots of nice things and am thinking of starting a new blog that I could actually commit to, and would actually be interesting. I hope you would of course be my first (and probably only) reader?

How are you and Elizabeth? and Hawkeye? Are you still in Brooklyn? I've been re-reading the entirety of your blog for old times' sake, and I have to say that after hundreds of posts the Onion-tended Consequences Burger still sticks in my mind. I really should try it.

No, I'd never heard of that. I just read about it Wikipedia and still don't quite understand. I guess it's like the equivalent of an American GPA (grad point average)? Instead of having a number assigned to your degree (for instance, I had an undergraduate degree in Political Science with a 3.4 GPA), you get a different kind of degree for how well you did in college/university? Is that sort of correct?

When I was in 7th grade (12 years old), taking a world history class, I was assigned Queen Victoria to write about for my final project. So I know all about her and Victorian England. Well... that was a long time ago... I still remember a bit of it.

I would love to read your new blog, if you start one.

If you want to know personal details about where I'm living and how everyone is, feel free to email me.