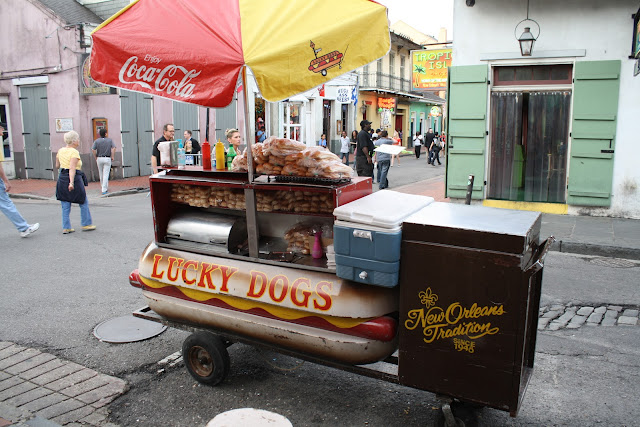 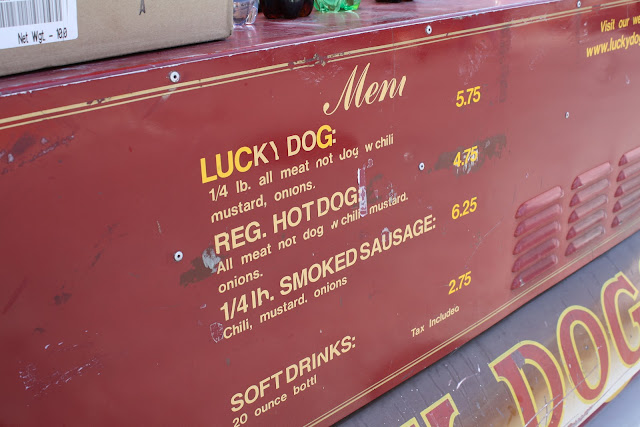 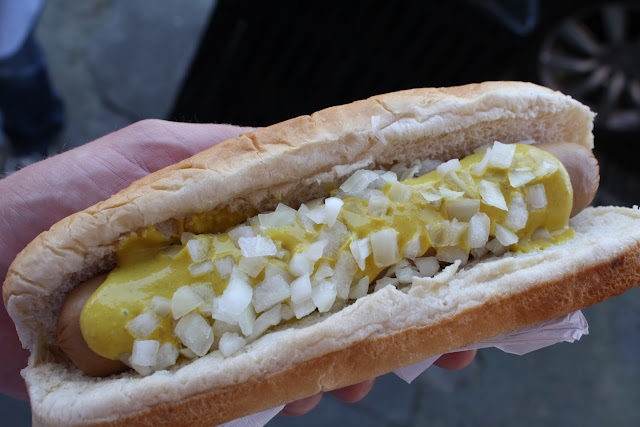 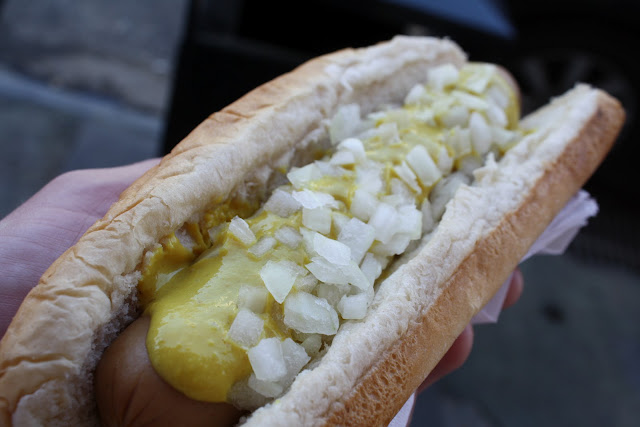 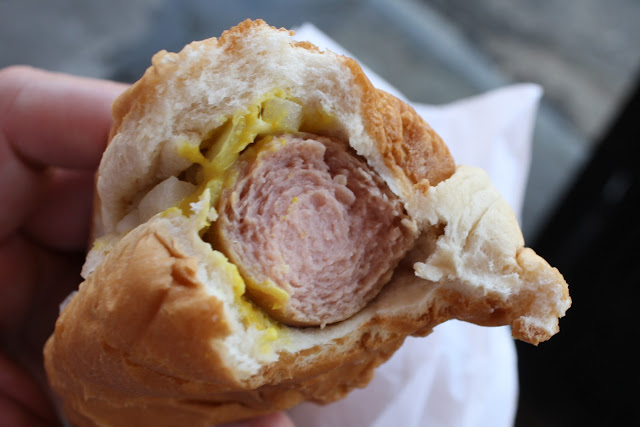 March 6, 2000. My friends and I were at a bar in the French Quarter when I looked at the TV and saw that Shaquille O'Neal had 50 points with the game still going on. But I was 21 and at Mardi Gras; was I really going to leave my friends and go back to the hotel to watch a Lakers game?

"I'm going back to the hotel to watch the rest of the game," I announced. My friends did not even question me.  Just outside our hotel, on the corner of Bourbon and Toulouse, I spied a Lucky Dogs cart and grabbed myself a dog.

I watched the rest of the game, fell asleep and was awakened around 4 in the morning by my friends stumbling back in, with Lucky Dogs of their own. One of them flopped down on the bed and passed out. So I ate his Lucky Dog. I mean, he had woken me up, I was still hungry, and he obviously wasn't going to eat it. It only seemed fair.

The next morning (and most of the afternoon) they did not get out of bed. They bought Deuce Bigalow: Male Gigolo on pay-per-view, the only unpleasant experience I have ever had in the Crescent City. "How come you're not hung over?" Cara asked me.

"Because I came back at midnight instead of 4," I said. "And also I ate two Lucky Dogs: mine and your boyfriend's."

July 17, 2002. My birthday. My friend Tom and I had been out for many hours in the French Quarter. Staying at that same hotel as I had two years earlier. At the end of our evening we got Lucky Dogs from that same corner. Loaded with all the toppings, the things weighed more than a pound each. We got on the elevator, sweating booze in the sticky New Orleans summer air.

There were two other people in the elevator: a young woman, perhaps 20 and supermodel hot, and a guy in his 50s dressed in a suit. The girl told us our dogs looked disgusting. We didn't really care what a hot young girl thought; we had each other and our wieners. (Okay, that came out wrong.)

But the older guy decided he would try to make himself look cool in the girl's eyes by making fun of us. I let the first couple sentences go but after the third I looked at him and said "What the fuck is your problem?" Just then the elevator stopped at our floor. I stepped off but kept my eye on him, awaiting his repsonse.

Tom decided to interject: "We don't care if these make us fat... because we're already fat!"

At the time his comment struck me as an example of Algonquin-Round-Table-level wit. The next morning it seemed less so.

At any rate, we ate those Lucky Dogs in our room and damn were they delicious.

Late April, 2004.  Jazz Fest time. The first night in town with my friends Dave and Carla, the former who had been to NOLA more times than I, the latter who had never been. We introduced her to the Hurricane, the Hand Grenade, and the concept of the Bourbon Street stand selling plastic cups of beer. Eventually in the early-morning hours we needed a second dinner. We took Carla by a Lucky Dogs cart and she got a dog with her name spelled in mustard. Somewhere in my collection is a photograph of a wild-eyed Carla holding up her hot dog, proudly displaying her name.

A few nights later it turned into a guys-night-out, as the ladies decided to stay in. Kevin bought Mardi Gras beads for everyone and we eventually stopped for Lucky Dogs. Another picture in my collection, even more bizarre than the one of Carla, is of me, Kevin, and Dave and Dave, all of us stuffing our faces with hot dogs, wearing necklaces and looking like a pathetic lot.

So it might not surprise you to learn that I have never had a Lucky Dog while sober. (Something I imagine I have in common with thousands, if not millions of visitors to New Orleans.) But after walking around for an hour or two in the French Quarter after eating those beignets at Cafe Du Monde, I was hungry again, while Elizabeth was not. I said no problem, I will just get myself a Lucky Dog.

I ordered one with mustard and onions. The display says $5.75, tax included. The guy charged me six. I wonder, do they routinely jack up the price by a quarter, hoping drunk people won't notice? Or is the sign outdated? I didn't ask; I didn't care.

I was worried it was going to be one of those things that only tastes good when you have a few drinks in you (like, say, a Jack in the Box taco) and that I would spit the first bite out and say "What the hell is this?"

But I didn't. It was actually pretty good. It did not alleviate my longing for a Dog Haus dog (after three and a half weeks I'm actually missing one of those even more than a Double-Double, al pastor taco or Zankou tarna wrap) but it was much better than I was expecting it to be. It was hot, thick, and the bun was perfectly soft. I would have no problem eating one of these again, sober or otherwise.
Posted by JustinM at 10:44 AM

Man, Justin! If this lucky dog post is your last from NOLA, I really feel bad for you. I realize that many of these choices were driven by nostalgia, but Cafe Du Monde excepted, you couldn't do worse in picking out places to eat. And by the footprint of the places you've identified so far, it seems like you didn't even get a glimpse of the city outside of the french quarter. What a major shame.

If I am not wrong and you did venture out into the neighborhoods, please post the experiences. If you didn't, please consider coming back to NOLA when you aren't just passing through. The culinary choices around here will blow your doors off.

We both had one of the best times of our lives, so your sympathy is not needed, but thank you.

We indeed ventured out of the French Quarter, as I have done on every trip to New Orleans, but we did not eat anywhere. We had tried to get reservations at both Cochon and Gatreau's but they were both booked so we eschewed making plans and just did what we felt like.

Advance purchase JFK to MSY round trip, non-stop is $240 per person jetblue non-stop right now. I know you are moving and settling in, but consider coming back to our wonderful city on your next vacation!

Will do. I want to eat at the Hard Rock.

You are funny and eat like a real human. I love it!

Brad: I have never been to NOLA. Where would you suggest a newbie to eat?

I loved to your response to such a smug comment.

Michelle, the thing you have to remember is that people will always tell you what THEY want to do, they just phrase it differently: by saying "you have to go here," or "you made a mistake by not going there." What they really mean is "I want to go here" or "I would have gone there."

I've been taking road trips for a long time, pretty much my entire adult life, and once I figured out that I should do what I want, not what other people would do in my shoes, I stopped letting other people's criticisms bother me.

Lucky Dog makes me think of the book Confederacy of Dunces - if you have not read it you should...

Hey, all I meant is that aside from Cafe Du Monde, which is a local institution, the restaurant choices Justin chose were all touristy and in the FQ. He said he did venture out in the neighborhoods and just didn't get to eat at some of the places he would like. I'm just suggesting that if you come to our city, you get out away from the touristy areas and experience what is a truly unique US city. You can have a really great New Orleans experience in the French Quarter, just like he did at CDM. And I think Justin made it clear (as did I in my post) that nostalgia drove at least 2 of his choices of places to eat, and that's great. But without leaving the FQ, he could have visited Central Grocery, or Brennan's, or Bayonna, or Galatoire's, and on and on and that's JUST in the FQ. If he could have gotten in at Cohcon, which should have been possible for lunch, he would have been blown away. I am biased, but I believe that NOLA is one the top five food towns in the US and to go to a chain or a tourist trap is a shame, and I'll stand by that statement all day, every day. I'm not saying there isn't something valid in wanting to eat a lucky dog sober, but when you are a five minute walk from the home of the original muffuletta and you pick the lucky dog instead, all I can say is WOW. The main reason I reacted the way I did is that I read this blog daily. I've read of Justin's fondness for New Orleans and I was surprised he didn't make it to some of our city's better restaurants. And he could have done that and spent much less money than he did. Some of our greatest food is not expensive. And, I know he likes crawfish, and they are in season and as far as I can tell, he didn't get any fresh out of the pot! That's why I responded and that's why I urged him to come back again. Hell, he didn't even get onion rings FROM POPEYES (where he could have gotten some of the exalted DELTA SAUCE). But it's no big deal. He had fun and I hope he comes back.

Melissa, if you are coming down and want suggestions, there unfortunately too many to list here. Just ask around and you will find that the locals (yes even the sketchy looking ones) will give you great suggestions if you give them a clue as to what type of food you want and how much you are looking to spend. People here love to engage in conversations about where to eat. Just avoid asking hospitality personnel and cabbies as they might be getting kicked back to steer you somewhere. Take a streetcar ride and ask the passengers. Strike up a conversation with a local on your inbound flight. The only major thing lacking food wise is ethnic food. NOLA has some great Vietnamese food, but most other quality ethnic foods are sparse. Also don't be afraid to venture outside of the city for Cajun food. New Orleans food is Creole. That's a blend of local food with French and Spanish influences. If you want to eat Cajun, you will need to visit Cajun country that will take you on a hour or two drive out of the city.

It's not a better deal than a Costco dog. Which is why I did not claim it was. In fact, I didn't say anything about Costco.