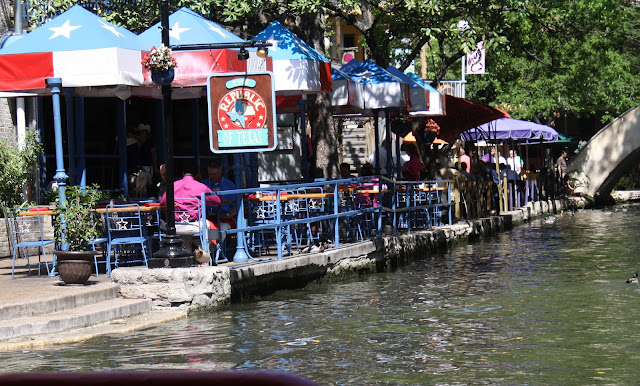 Elizabeth had never been to San Antonio and I had not been since I was nine years old. So we decided to go. It was a hot, very humid day. We walked up to the Alamo, about a mile from our hotel. It was one of the least entertaining historical sites I have ever seen.

"We ask that gentlemen remove their covers," an older man said to me upon entering. "This is holy ground."

I removed my Angels hat but I couldn't help but let out a little laugh. Holy ground? The rest of the exhibits were pretty much along those lines: this is the most important place in the history of the country and possibly the world, but whatever you do, don't take any pictures. The gift shop, on the other hand, was impressively stocked and staffed, selling ten dollar bottles of barbecue sauce and souvenir coins. (And, of course, you can buy lots of pictures there of the things you weren't allowed to photograph yourself.) The priorities are clear. We were there a total of 20 minutes, then walked down to the Riverwalk and took a boat ride, which was much more fun and informative.

After that we were quite hungry. There were the usual assortment of chain restaurants, none of which I was willing to visit: Hard Rock, Joe's Crab Shack, Hooter's, Rainforest Cafe, and probably some others I am forgetting. I'm not particulary opposed to chain restaurants, but I was certainly not in the mood to eat at one on the banks of the Riverwalk. There was a restaurant called "The Original Mexican Restaurant" that I refused to visit on the grounds that the name was dishonest. We decided to just take a stroll and see what caught our eye.

We had stopped at a restaurant called Boudro's - looking at reviews now, it seems to be the best-reviewed restaurant on the Riverwalk - and a pulled pork sandwich with black pepper sauce caught my eye. But the host told me it would be a while before we could have an outside table. I wanted to eat immediately and I wanted to eat outside, so we kept walking.

At Republic of Texas, there were several outdoor tables available. Yes, the fact that it was the only restaurant out of a dozen we'd passed with available tables should have been a warning, but I wasn't thinking clearly. I needed a cold drink. 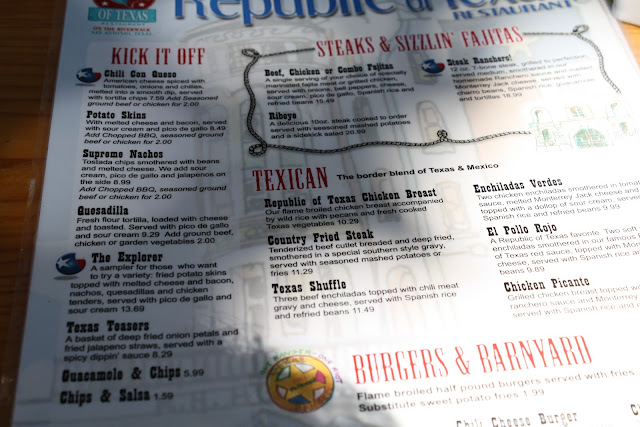 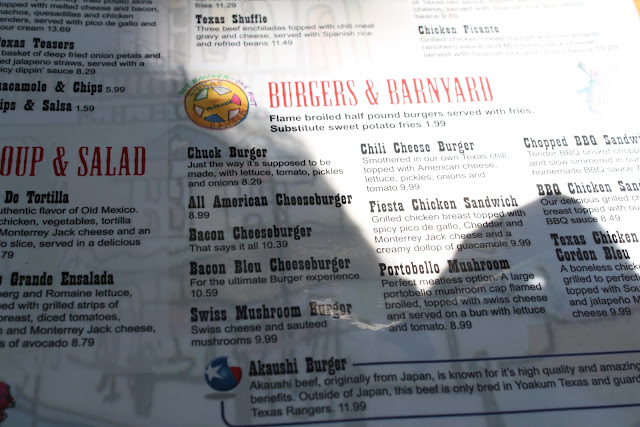 Not a challenging menu but I didn't expect it to be, and to be honest I didn't really care. 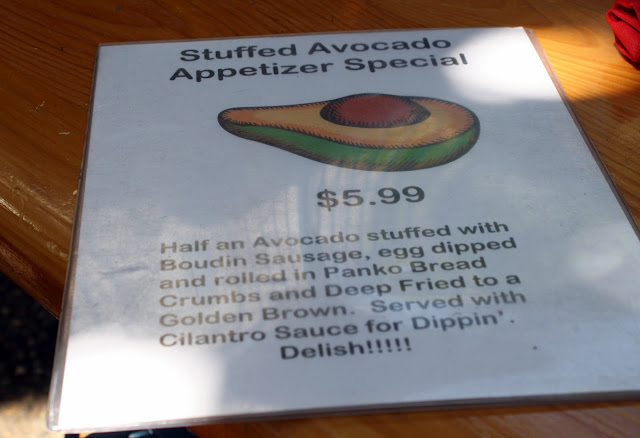 I would rather drink the water out of the Riverwalk than eat one of these. 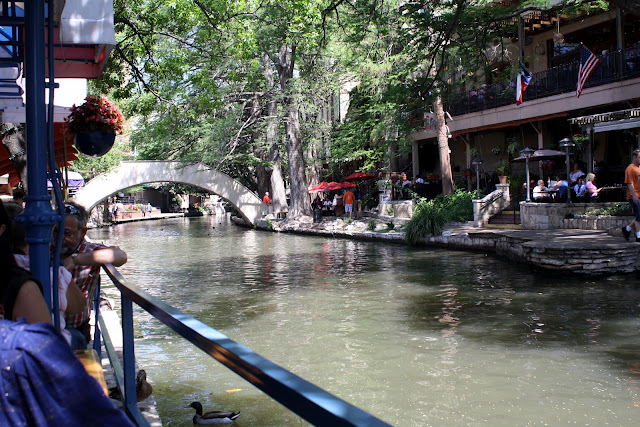 Not too shabby, eh? 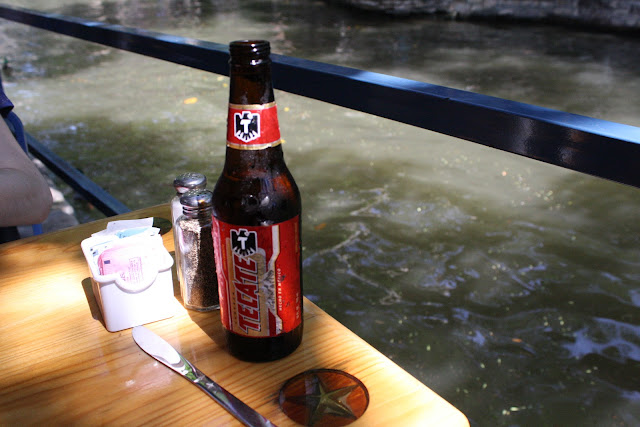 The Tecate was ice cold and exactly what I wanted. I finished it in about thirty seconds. There would be more. 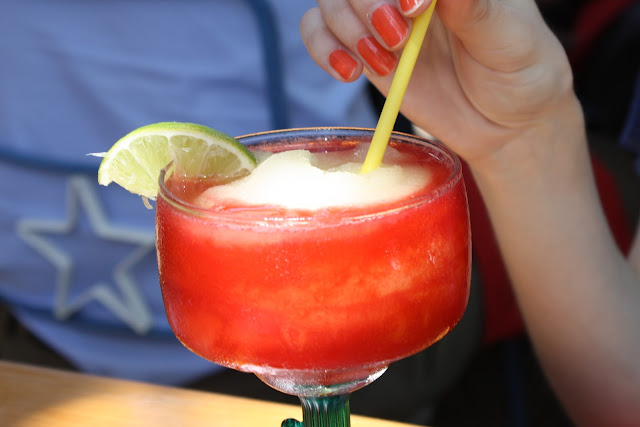 Elizabeth had a strawberry daiquiri and she enjoyed it very much. 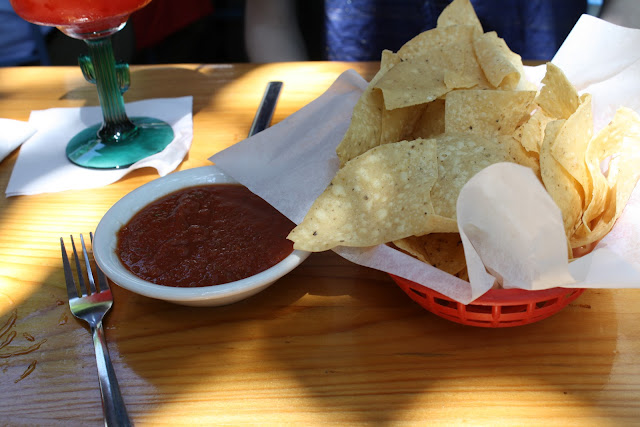 The chips were okay but obviously not fresh. The salsa was the most watery, flavorless salsa I have had in years. (Not that this stopped me from eating a lot of it.) 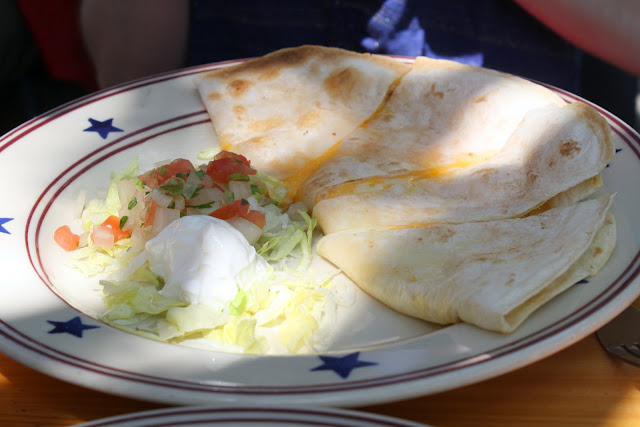 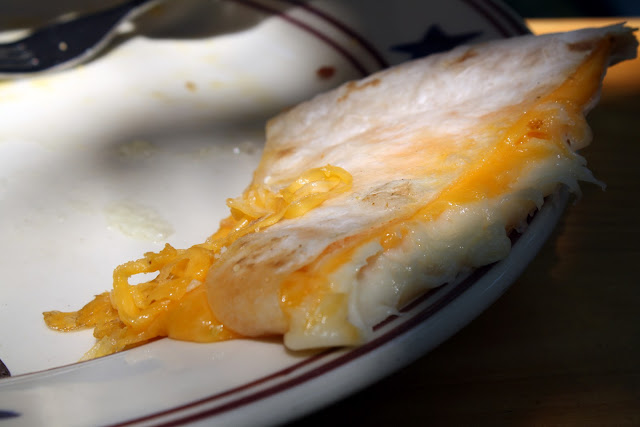 Elizabeth had the cheese quesadilla. As usual, she couldn't finish her plate so I took a wedge of it. There was plenty of cheese and once some sour cream and hot sauce was applied, it was pretty good. It's kind of hard to screw up cheese grilled inside a tortilla, and Republic of Texas did not. I know that's a pretty tepid review, but that's the kind of place it is. 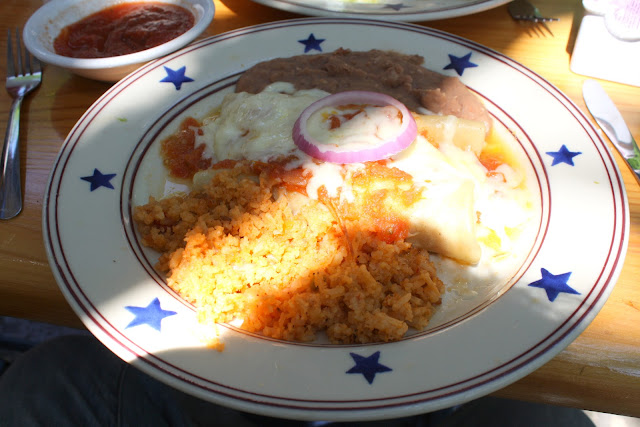 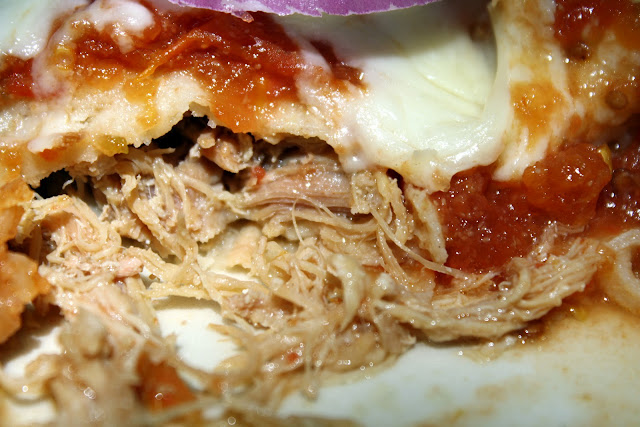 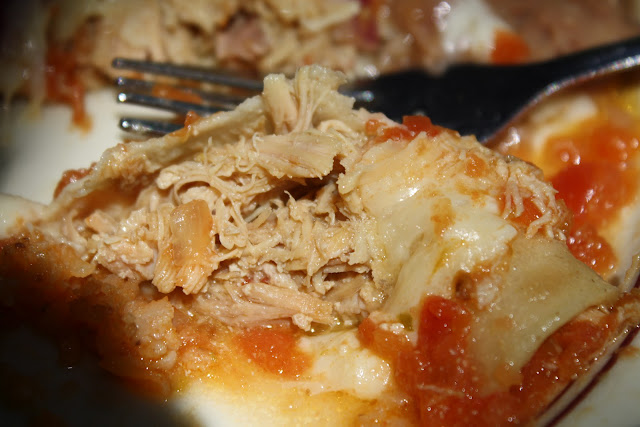 I had the Pollo Rojo: two chicken enchiladas smothered with red sauce, topped with cheese, and placed between rice and beans. Like Elizabeth's quesadilla, this was adequate. No better, no worse. I would never recommend it to anyone - without the hot sauce I added, it was incredibly bland - but it did the job of satiating me. (On the menu, it was under a section called "Texican," which sums up the food perfectly. Even though I don't really know what that means.)

I wish we had waited the extra time to eat at Boudro's, but I'm still glad we bypassed all of the chain retaurants on the Riverwalk. (I can take the subway for 20 minutes and eat at any of those in Times Square.) Republic of Texas was far from a good restaurant, but other than that terrible salsa, it wasn't really bad. The service was good and it was certainly an enjoyable location in which to eat.

And the best part: you have now read about my two least favorite meals of the trip. We got them both out of the way in the first 48 hours.

Bummer meal. Those are the worst!

Except for being boring & over-hyped, the Alamo is kinda like the Sistine Chapel, no? Do Japanese investors own the copyright to the Alamo as well?

Melissa: The food could have been much better, but it's all about context. Sitting by the water, feeding the stale chips to the ducks, washing down the grub with cold drinks... it was fun. I wouldn't really call it a bummer.

SuperLarge: But at least I took lots of photos in the Sistine Chapel and enjoyed being there.

First off, I am glad you are staying away from restaurants that could possibly, but probably are, lying. Sounds like everyone needs to visit the Alamo, NOT! On a high note, Elizabeth's nails and drink match, which is pretty dang posh.

I went into this "Man vs. Food" thing when I saw the pic of the deep friend cado. My brain said "DO IT JUSTIN" and my soul said NNNNNOoooooooo...

I wish we had eaten at the other place too. It seemed a little odd to be out on the river which was so nice and have such a mediocre meal. Oh well. The drink was good and I made friends with a duck.