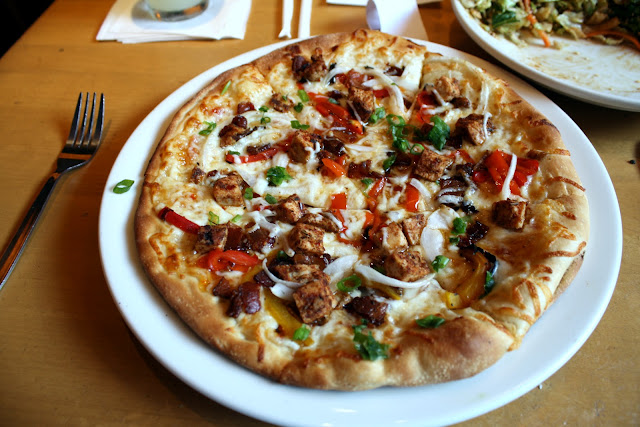 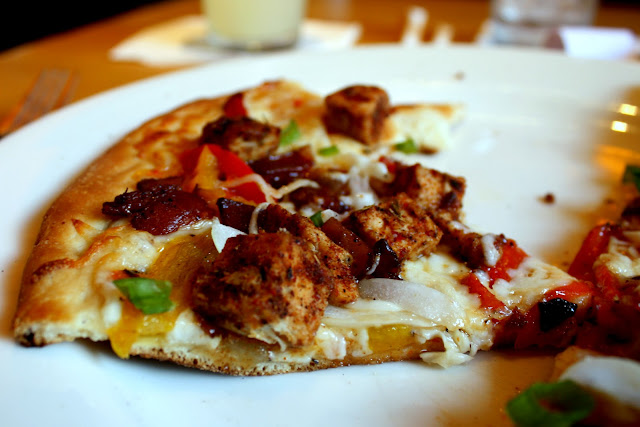 It's been a long time since CPK has had my favorite of their pizzas: the Teriyaki Chicken Pizza. (A year and a half ago I made it from the CPK cookbook; it wasn't as good.) But the Jamaican Jerk Chicken Pizza is a pretty good second: chicken, a "sweet Jamaican sauce," bacon, onion, bell peppers and other Jamaican spices.

They used to offer it as a frozen pizza, but I haven't seen that in at least four years. (Back in 2008 I saw a bunch of them on sale for 99 cents each at the supermarket; my extreme enthusiasm was immediately dampened when I picked one up and realized it had previously been defrosted. All of the toppings had obviously shifted over to one side and the box was deformed. I considered getting just one to try it - I mean, it was less than a dollar - but in the end put it back. And I haven't seen them again.)

So these days when I go to CPK - which is not often; I have been three times in four years - I get the Jamaican Jerk. Last weekend I was taking the cat to the vet to get fixed and I had some time to kill before I picked him up in the afternoon, so I stopped by the CPK right across the street.

The pizza was good, as always. I really like CPK's toppings. Unfortunately, I don't think much of their crust, it is the thing that keeps me from being able to call CPK's pizzas great. It tastes no different to me than the refrigerated doughs you can buy at the grocery store. It's not bad, but when I'm eating pizza at a restaurant (especially a personal-size pizza that costs $13.25), I want the crust to taste better than the one-dollar dough from Trader Joe's.

Still, I like the toppings so much that I'm sure I will continue to get a craving for this pizza once every couple of years.

The photos look great - too bad about the crust. Maybe you can get one of your NYC pizzerias to make a version of it.

Wait a second - get one of these pizzas, take it to My Little Pizzeria, get a plain cheese pizza, then transfer the toppings from CPK to MLP! Banana you're onto something here...

My super Target has the frozen Jamaican pizza again. I haven't bought it yet but I remember loving it a few years ago..

Damn, I wonder if regular Target has it too? I don't know where a Super Target is. In fact, I have only been to Super Target once, on the first day of our trip out to New York. We stopped at one in the desert and it was awesome.