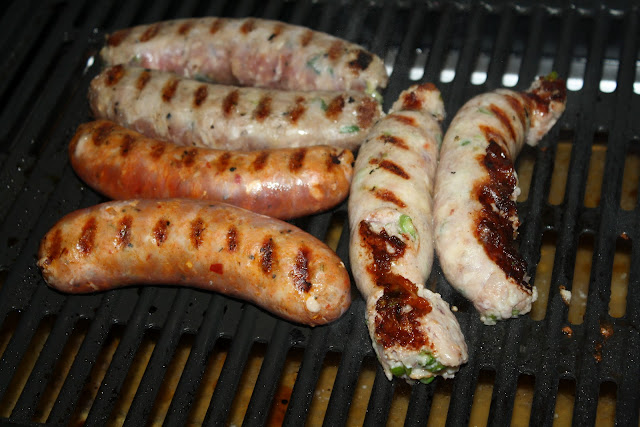 I could not possibly rank the things I love about Paisanos Meat Market. It would be too hard to do. But if I tried, it's safe to say their selection of sausages would rank in the top three. Is there anyone (excluding my vegetarian friends) who doesn't love a grilled sausage? Any summer barbecue is more fun with the sound of sausages sizzling on the grill. And in the autumn, when football starts and weather cools off, there is nothing I love more than a grilled beer brat.

A couple of weeks ago I picked up three different kinds of sausage at Paisanos: hot Italian, garlic, and "bacon with asparagus and onions." I cooked them on the indoor grill. 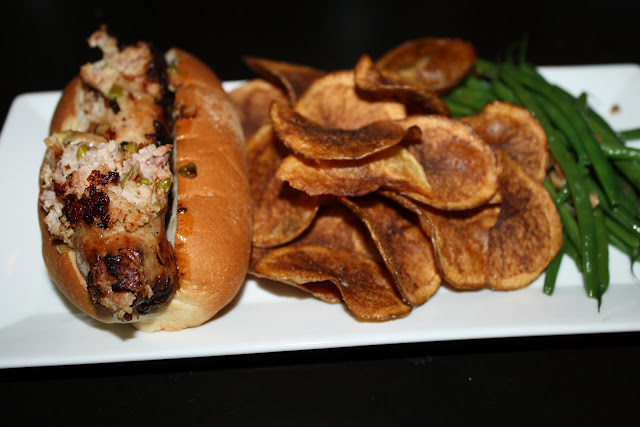 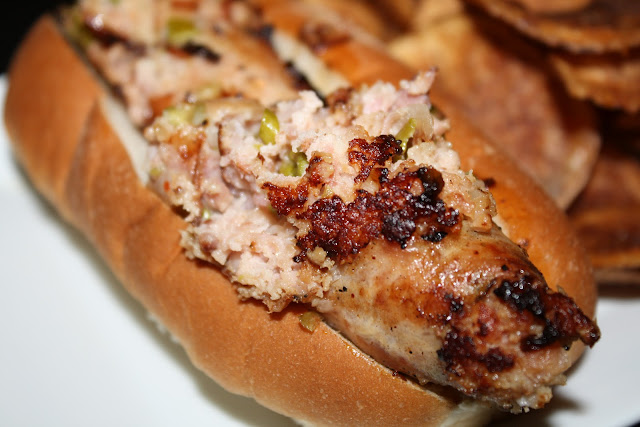 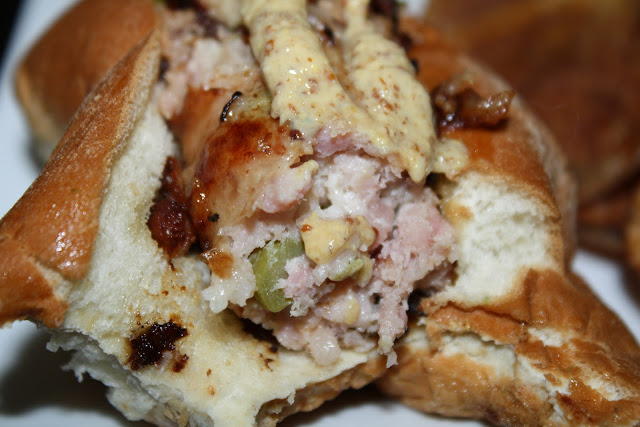 I decided to take the bacon sausage, and I put it in a bun with a bit of mustard, and green beans and potato chips on the side. It was an outstanding sausage. 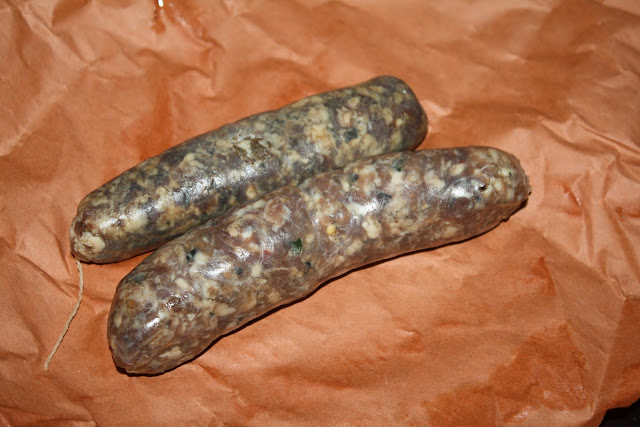 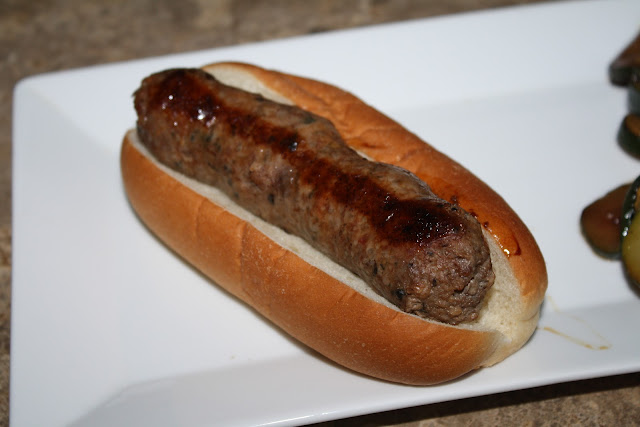 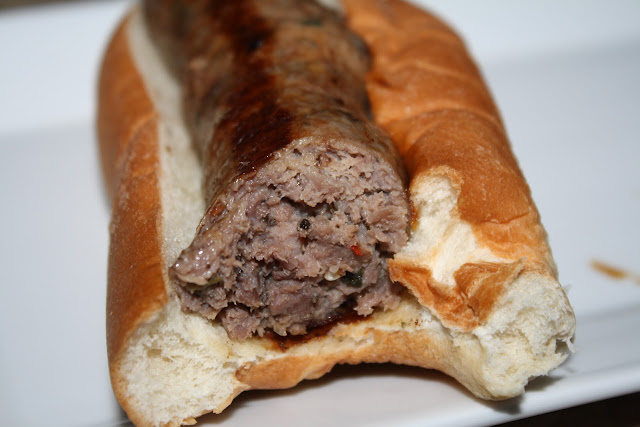 This sausage was so wonderfully flavorful that it did not need any condiments. I ate it in a bun and did not think of adding anything else. The bison was only slightly gamey, and the red wine and black pepper were both noticeable. I did not taste any mint but that's okay; of the four flavors in this link, mint is my least favorite. I definitely will be getting this again. 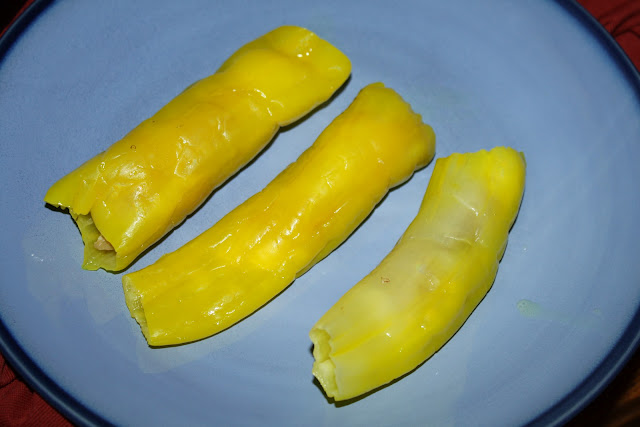 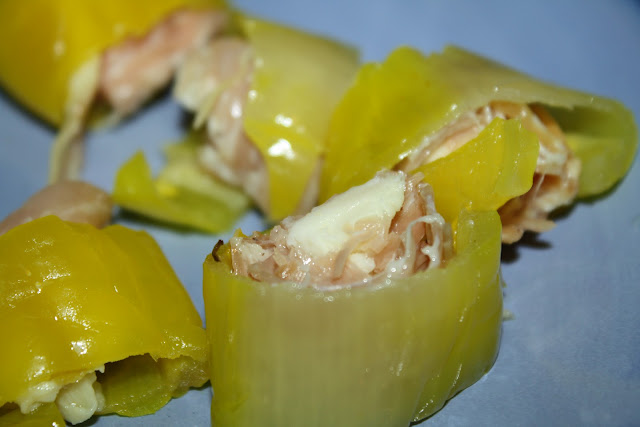 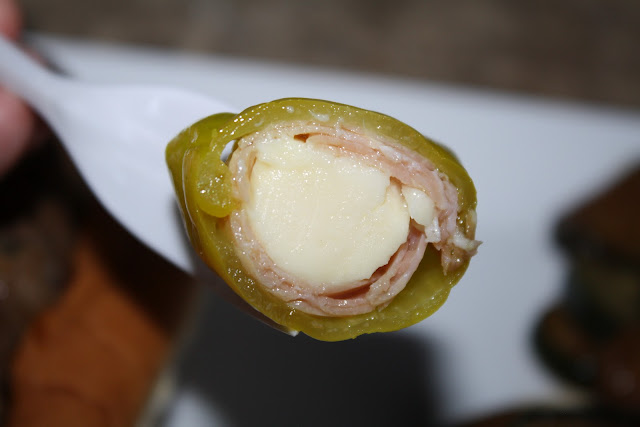 I also spied at Paisanos some finger peppers stuffed with prosciutto and cheese, so I bought three of them as a side. They were quite tasty and their spice and saltiness worked really well with the bison sausages.

Mmm, great stuff going on here. I would be all over those bison sausages, and good going not putting any condiments on it - to really taste the sausage itself. I may be moving to NYC so will have to check out Paiasanos. Looking forward to the 1000th post (WOW!).

I have had many Bison and Elk sausages in my life (one of the great treats of living in the Mountain West) and have found them incredibly flavorful. Gamey, in a good way. Sweet like beef but also herbacious and a bit grassy.

can't WAIT to cook up my sausages from there!

My mouth just had a salivagasm.

My sausage will do that to you, Nosh.

The hot sausage was my favorite for sure.