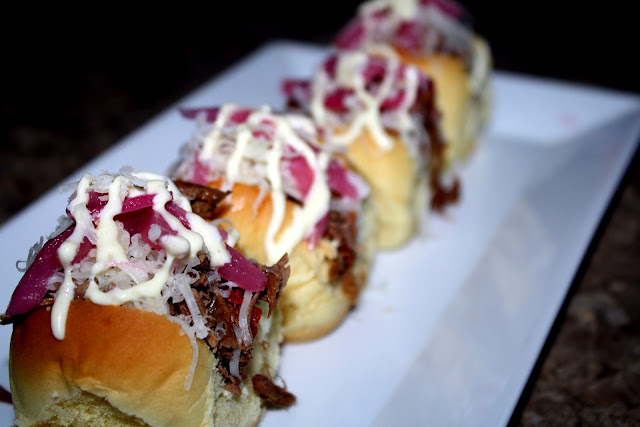 The first day of fall. I know back in Pasadena it's hot, but it's just about perfect here: the summer is over, no extreme heat and no humidity, but it's not yet cool. It's just sort of mid-70s, sunny with a slight breeze.

And what a lineup of games on Saturday: UCLA-Oregon State, USC-Cal, Michigan-Notre Dame, LSU-Auburn, Clemson-Florida State, even Arizona-Oregon, kicking off at 10:30 PM. And two baseball games I was looking forward to: the Angels with their backs completely against the wall, no margin for error, taking on the White Sox. And the Yankees and A's: for the first time I can remember, I was truly pulling hard for the Yankees, needing them to beat the A's for the Angels to have any chance at the postseason.

So good food was needed, but nothing that required too much effort - no assembling egg rolls or delicately placing ingredients into tortilla chips - as I wanted to keep my eye on the TV for 18 hours straight. Good food and no effort? Slow-cooker time. 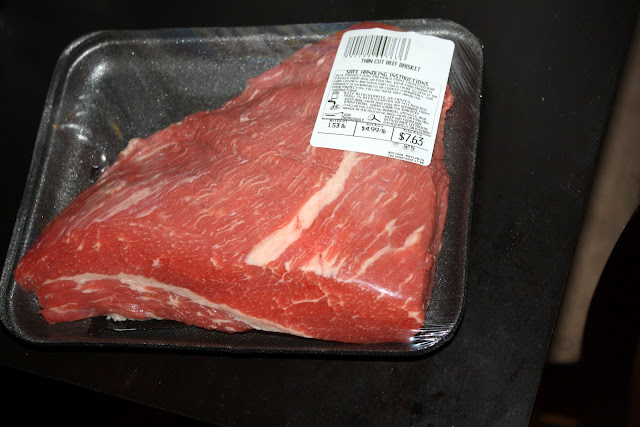 I stopped cooking brisket for a while when I arrived in Brooklyn because there was always too much food. I don't mind some brisket leftovers, but it had gotten to the point where there were enough leftovers for several people. But the market directly across the street from me starting selling thin-cut briskets, between one and one-and-a-half pounds, which is perfect. I picked up one of those Friday night, rubbed it with some pepper and let it sit in the fridge. 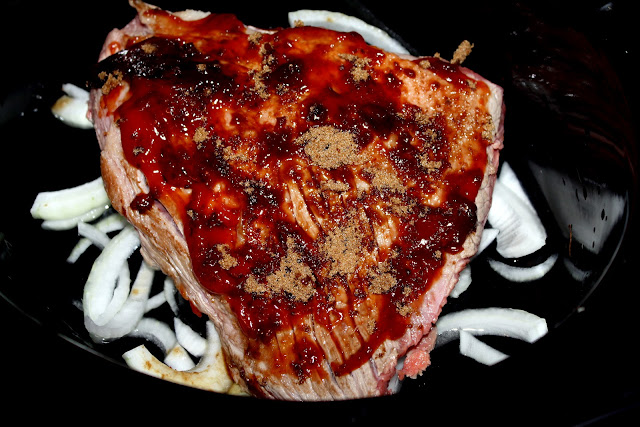 Saturday morning I seared it on the fatty side and placed it in the slow cooker on a bed of onions, with a cup (more or less) of water. I considered using a beer or Dr Pepper, but the brisket here was only going to be one of the flavors, so I didn't worry about it. I rubbed some ketchup and a little brown sugar into it .

For nine hours I let it cook while I watched sports. The smells were fantastic. 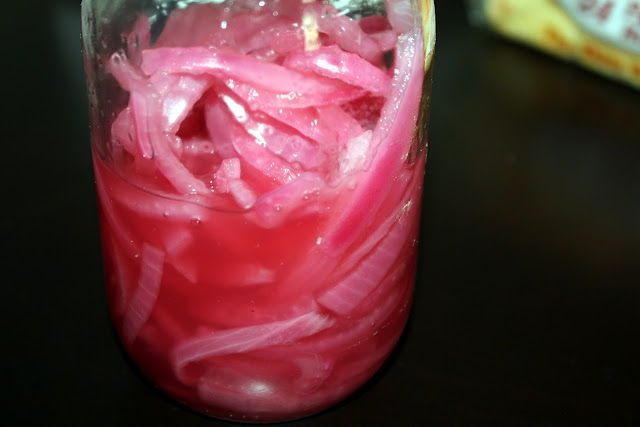 In the morning I made simple pickled red onions: I sliced the onion and put it in a small pot with red wine vinegar and white vinegar. I cooked it on medium until boiling (about five minutes), let it boil for one minute, and emptied the whole thing into a jar. (I just rinsed out one of my almost-empty Brooklyn Brine Co. pickle jars.) 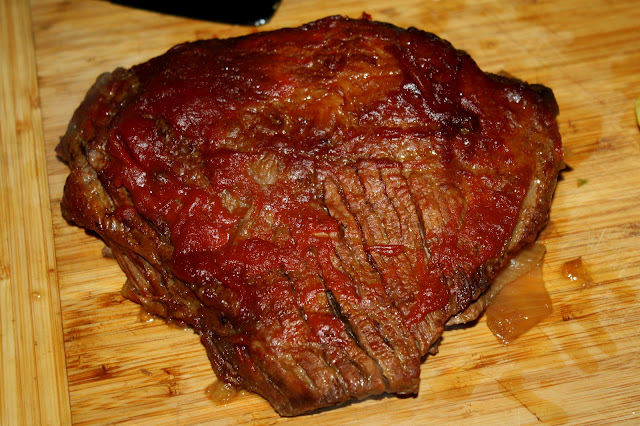 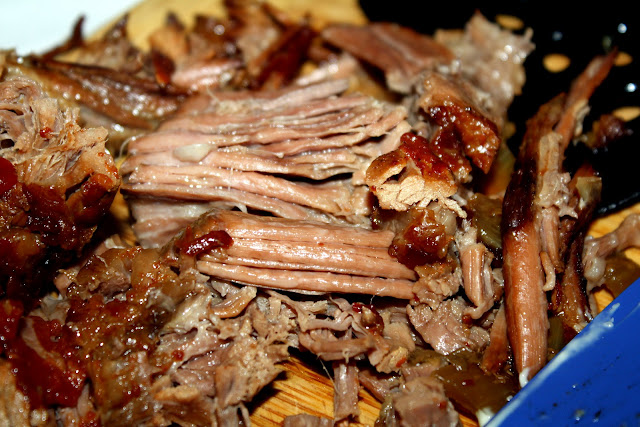 When we could wait no longer for dinner, I pulled out the brisket, scraped off the small amount of fat gathered on top, and sliced it up. As usual, only the smallest amount of effort was required; at this point the meat wants to fall apart on its own. 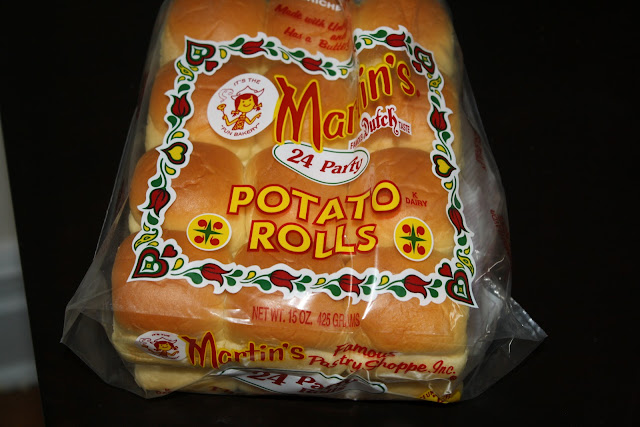 I had a package of Martin's "Party-size" potato rolls. Imagine a slider bun but even smaller. I carved a small valley in the top of several. 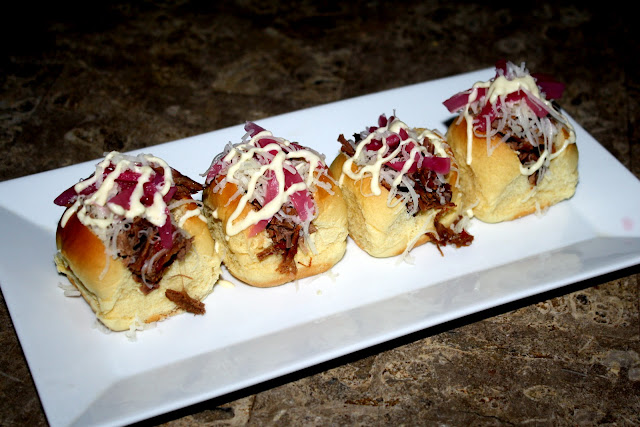 Into each roll I placed some shredded brisket and topped it with grated Manchego cheese. (I had planned to use Cotija but they didn't have any at the market. No big deal; Manchego is even better.) A few slices of pickled red onion went on each roll and then a drizzle of horseradish aioli. 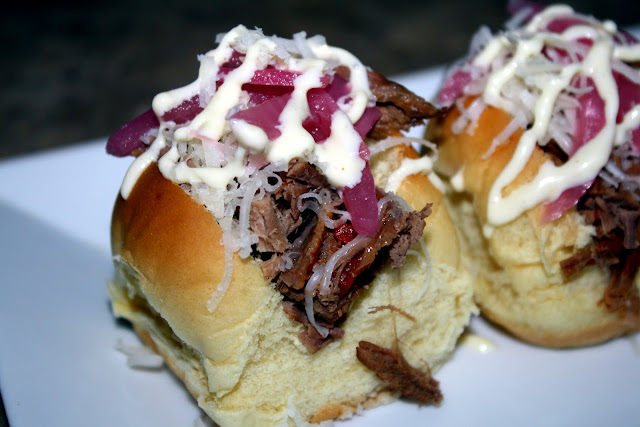 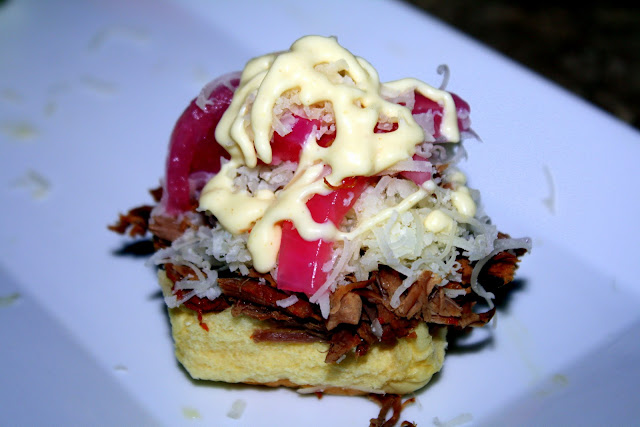 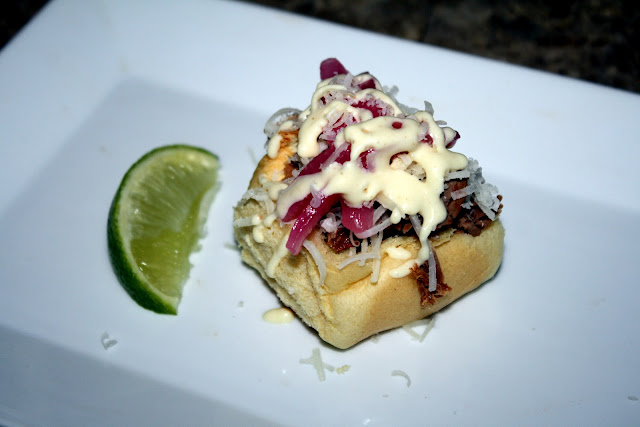 Damn these were good. The bun was sweet, the meat was juicy, the cheese buttery, the onions tart, and the aioli spicy. I even squeezed a wedge of lime onto the last one for some extra flavor; it too was good, but not necessary.

I would not hesitate to make these again.
Posted by JustinM at 9:00 AM

Isn't it great living in Martin's country? Those rolls are so good...when I was a kid I hated frozen hamburgers at cookouts, but I just ate the buns because they were Martin's.

I thought UCLA would have played better. They had some chances. Too many drops on offense.

Damn good day for watching football though. I'm already getting on the Notre Dame bandwagon. Actually made some oven "fried" green tomatoes for the game and they came out pretty good.

Several people have asked me how I feel about UCLA football after the first two or three games, and my answer is the same: the program has earned ZERO benefit of the doubt from me. Almost every season over the last 13 years they have played well in September, beaten ranked teams (more than once top-5 teams: Michigan, Alabama, Oklahoma, etc.) only to lose to underdogs at home and finish the season close to .500.

I thought they should have beaten OSU, but I was not surprised they lost, not one tiny bit. Killing early-season buzz is as much a part of UCLA football as Joe Bruin.

Looks great. BTW, the shrimp tacos are back at Del Taco here in Sacramento.

I was looking those up when I came across your blog. Hope you can find them in NYC.

Thanks David. I miss Del Taco more than In-N-Out. Unfortunately, the nearest one is in Toledo, Ohio: 564 miles away.

I am so making this for this Sundays football feast! :) Thanks dude. I hope you are all settled into your new digs.

Hopefully this will be good luck for the Jets.

I made these today for football and they were insanely delicious. Thanks for all of the great football eats ideas!