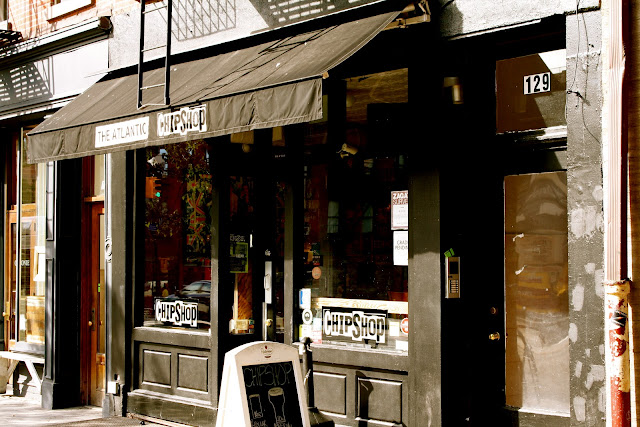 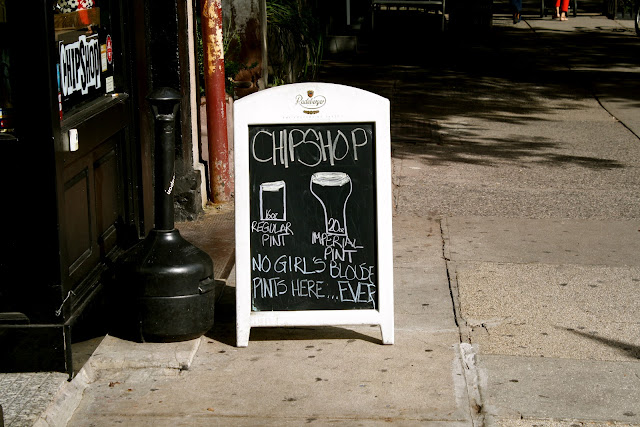 I heard about the Chip Shop many years ago. I don't remember exactly when, but dollars to fried donuts it was on Food Network. The hook was pretty simple: bring in anything you want and the Chip Shop will batter and fry it for you. Pop Tarts, veggies, even sushi... they will fry it all.

Elizabeth and I had dinner there last week. It was actually our third visit to the place. After we'd only been in town one week we stopped in one night for a couple of drinks. I wanted to see how good their Guinness is. It's very good... but not quite great. It's better than most of the pints back in Southern California, but I've certainly had better in New York City.

Then we stopped in for lunch one afternoon during the UEFA Euro. It was crowded - Spain and Italy were playing - but it wasn't really that crowded... and our service was comically bad. It was in the top 10 of the worst service I have ever received. Have you ever had a server where you just shook your head and said "Nice person, but she (or he) has chosen the wrong line of work"?

(I'll spare you the details but tell you the end: we asked for a box for our leftovers and the check. She brought the box but not the check; we sat there for thirty minutes with our leftovers on the table before she returned and asked "Oh, did you want the check, too?" Fifteen minutes later she returned with the check of the table next to us.)

But here's the thing - the food was really good. I had shrimp and chips that were quite tasty and Elizabeth had fish & chips that we both loved. So the other night, when we were down on Atlantic Ave and hungry, I suggested we check out the Chip Shop and, if it wasn't too crowded, stop in for dinner.

(I'll tell you now, the service at this dinner was great. We had three different people who looked after us and the girl from our previous visit was nowhere to be seen.) 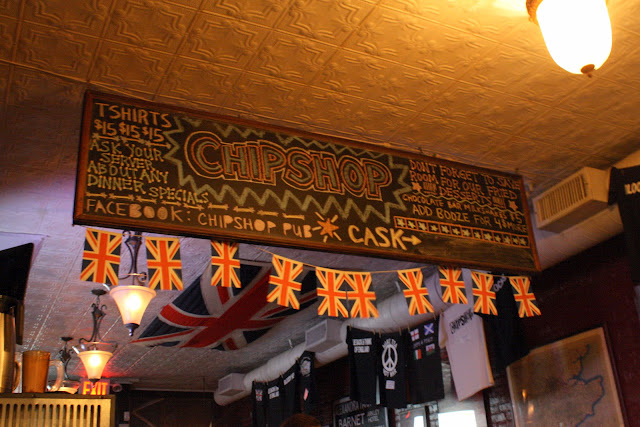 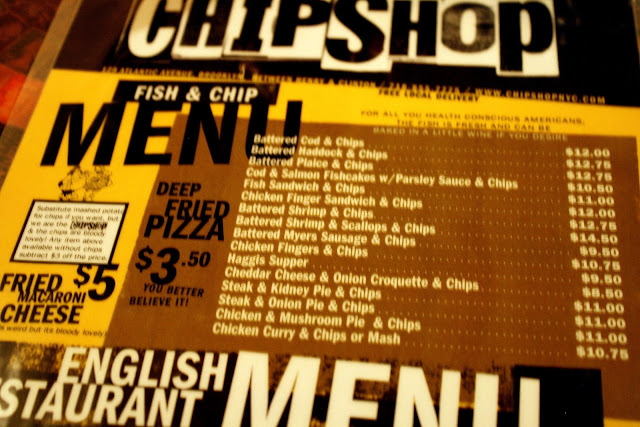 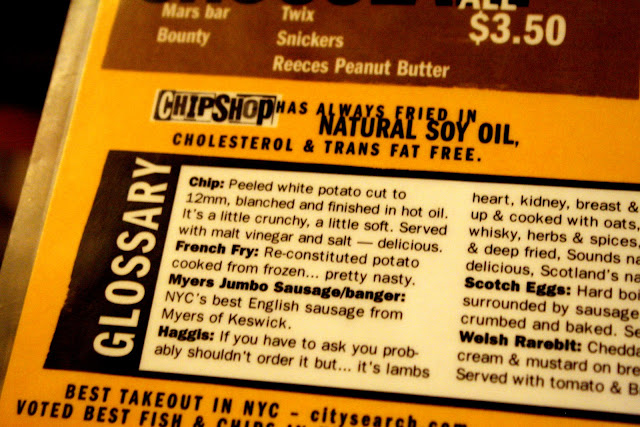 The menu is pretty standard pub far, though you have to love a place that offers multiple varieties of fish & chips. I also loved the different descriptions of a chip and french fry. 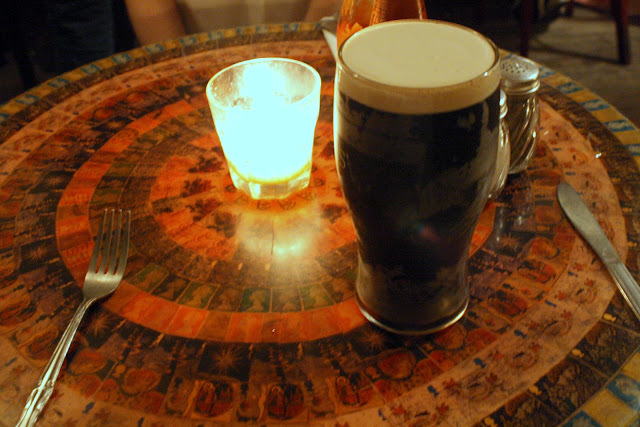 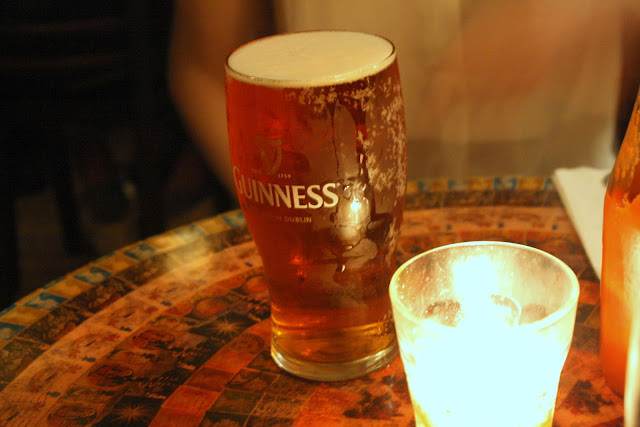 Elizabeth had a London Pride. 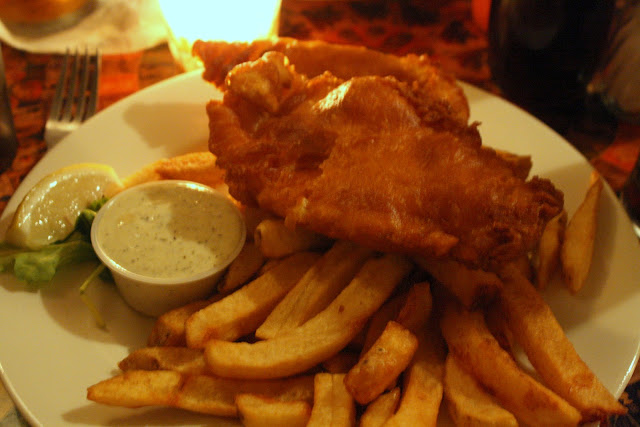 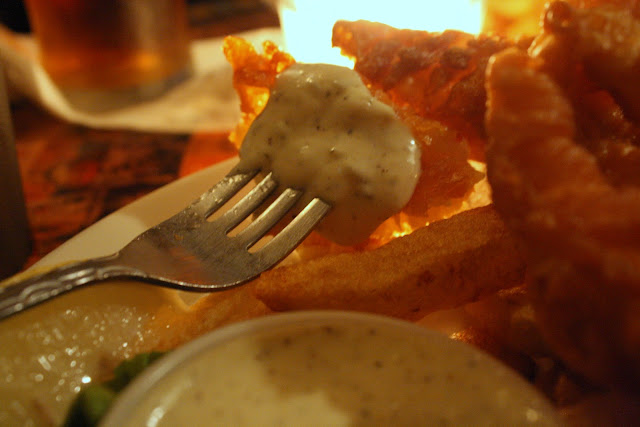 If you Google "plaice & chips," this blog comes up as the first hit, and it's been that way for many years. So these next words might surprise you: I've never eaten plaice & chips. That post was a guest post written by my friend Mick. (I've told many people over the years that they are welcome to write guest posts from their culinary adventures, but only Mick and my brother have taken me up on that.)

So I decided it was about time that I tried plaice & chips myself. And it was fantastic. The pieces are thin, much thinner than the cod that Elizabeth had on our previous visit. The main complaint I've heard about the Chip Shop is that the batter can be too greasy, but on both my visits I was very pleased: the batter was crunchy, adhered to the fish, and was not overly greasy. 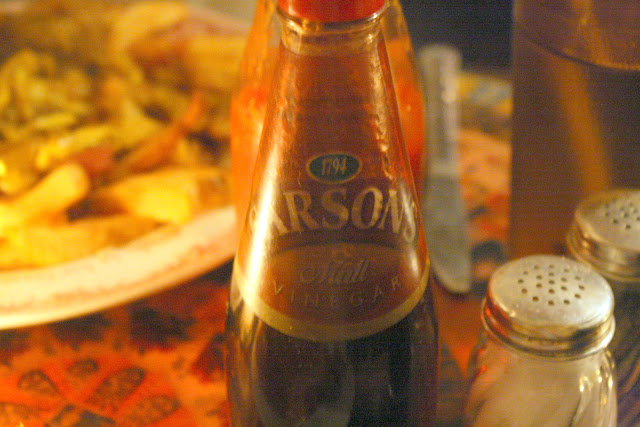 For the second time in my life, my table had a bottle of Sarson's malt vinegar on it. I knew this would please English Emily. 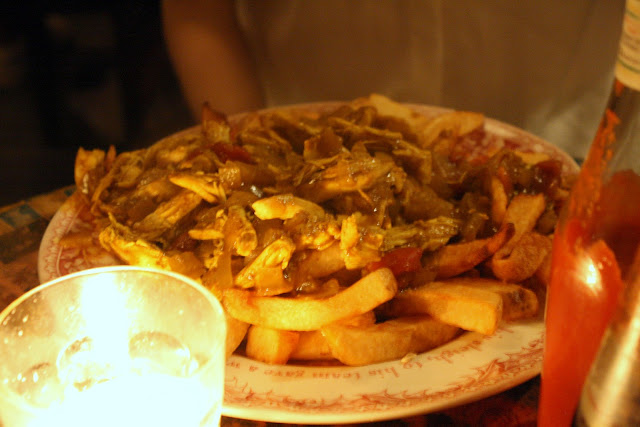 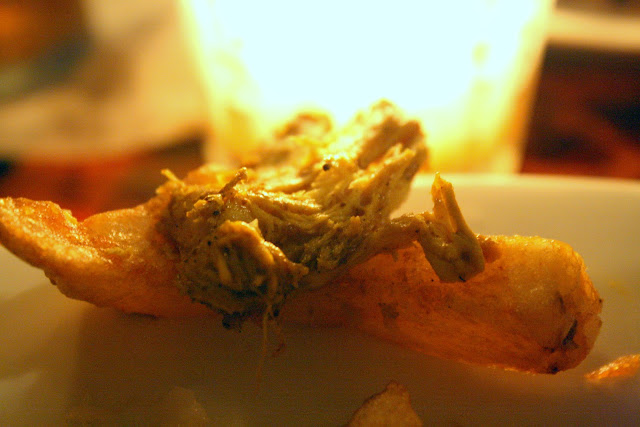 Elizabeth had the curry over fries. We both loved this. It was one of the best curries I've ever had. Elizabeth had no idea that curries were so popular in the UK until I told her a couple of years ago, and now she often gets curry when we have pub food. She thought this might have been the best she has ever had, and I agreed. I asked the server if it's popular and was not surprised when she informed me that it's almost as popular as their fish & chips.

We ended up taking about a cup of this home with us, and I ate it then next day when Elizabeth wasn't looking, because... well, because I could. 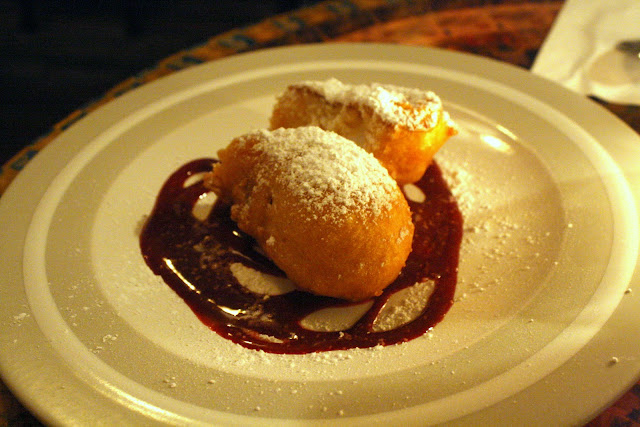 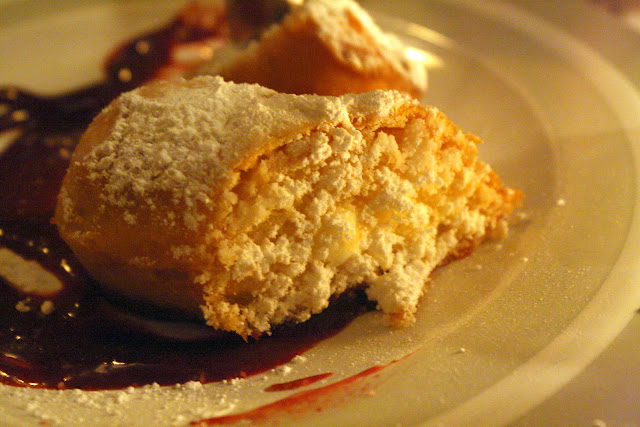 Speaking of doing things because I could, I ordered a fried Twinkie. I've heard about these for years but never ordered one. Never even considered it. But our food was damn good, I had a few drinks in me, and I figured Why not?

The thing was dusted with powdered sugar and served over a raspberry sauce. It was better than I ever imagined a fried Twinkie could be. We both really enjoyed it. The only thing we didn't like about it was having to share it. Next time we visit the Chip Shop - and there will definitely be a next time, probably soon - we will each be getting our own.

Yes, Curry! I often eschew the fried foods in pubs for the curry, It can be wonderful.
Maybe they can fry one of these up for you?:

Mmm this looks like good stuff - I would get the curry fries too.. and wait, you ordered dessert? That is a strange.

I've always wanted to try this place, glad to hear its worth visiting if timed correctly.

I'll definitely be interested to see you take on more of the menu until I can get there myself.

Nosh: I dunno, melted gummy stuff is like lava.

Bekah: It was yummy.

Banana: Well, I'd had a few drinks.

Rodzilla: The shrimp were really good, too, but the plaice was awesome.

Hurray! Sarson's!! That menu looks really really British. You should have the haggis and tell me if it's any good.

The food on this trip was amazing. I could have had at least two more fried twinkies.